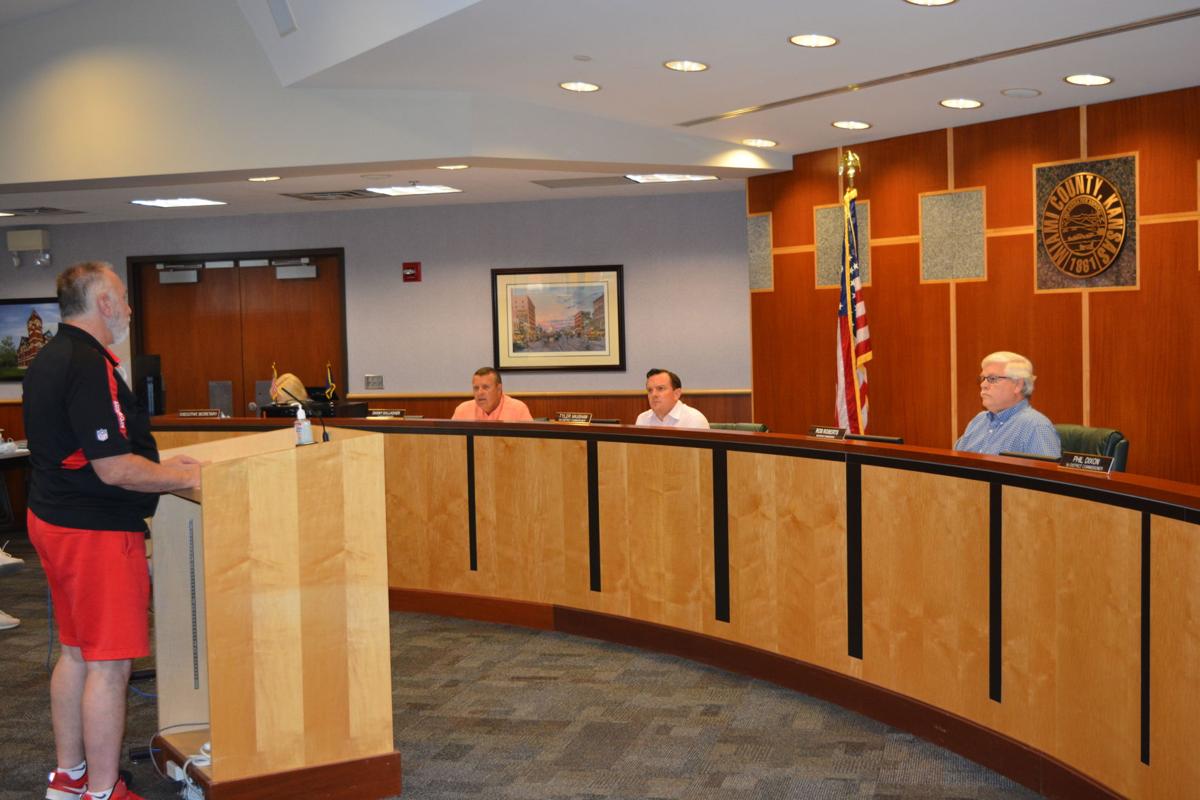 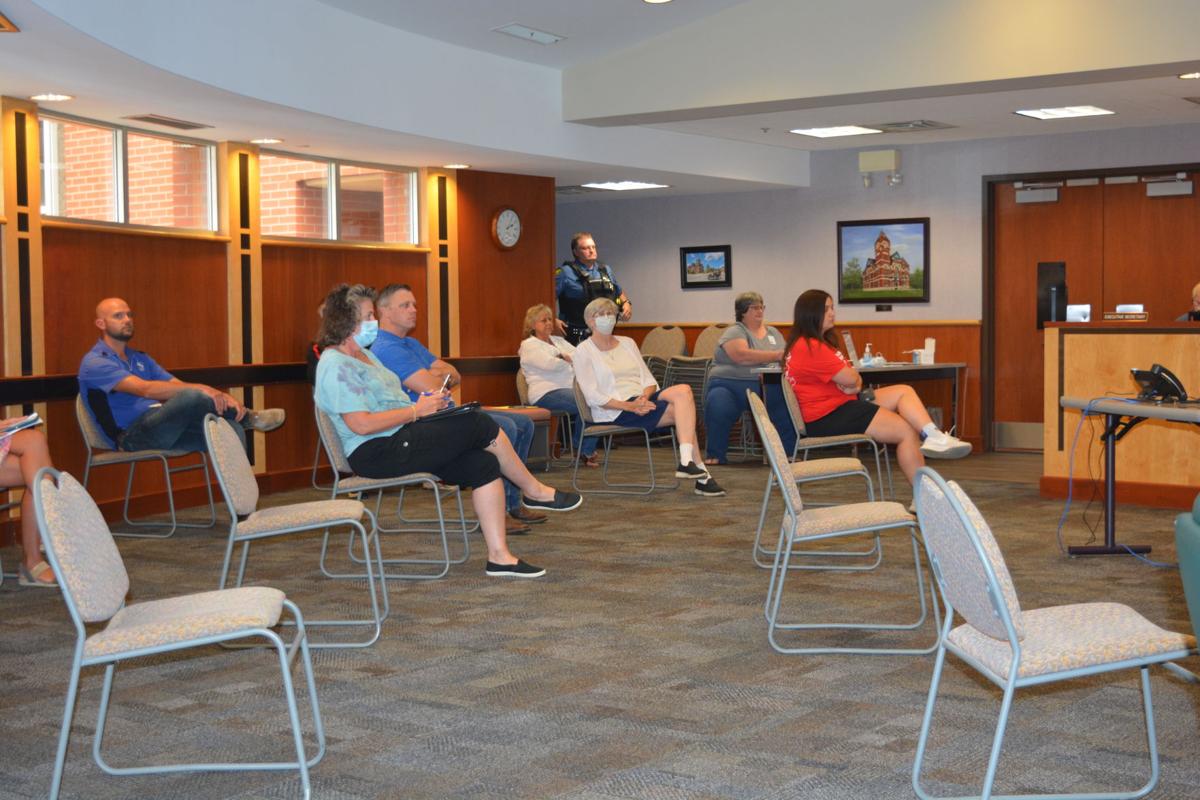 Miami County residents and elected officials at the city and county level continue to debate the use of masks and whether they should be required as mandated by Gov. Laura Kelly’s executive order.

All five Miami County commissioners approved a resolution during a special meeting Thursday, July 2, which makes wearing a mask or facial covering in public a strong suggestion but not a mandatory requirement, overruling the governor’s executive order.

The County Commission was given the authority by the recently passed House Bill 2016, which allows county commissions to issue orders that are less stringent than provisions of a statewide executive order.

Two communities, Spring Hill and Osawatomie, have chosen not to adopt the county’s stance and instead will follow the governor’s mask mandate. The Paola City Council was scheduled to discuss the issue Tuesday, July 14, but the results were unavailable at press time.

The Louisburg City Council chose not to take any action on the issue during its meeting on Monday, July 6.

The Osawatomie City Council voted 5-4 Thursday, July 9, to make masks mandatory in public places in Osawatomie, as outlined in the governor’s executive order.

The city of Spring Hill has already announced that the entirety of the Spring Hill city limits, in both Johnson and Miami counties, will be under the mask mandate, according to Spring Hill’s City Emergency Operations Plan.

Osawatomie City Council members had met during a special meeting Friday, July 3, to discuss Gov. Kelly’s executive order and the Miami County Commission’s resolution related to masks, but the discussion was continued until their meeting Thursday, July 9. Until then, the Osawatomie City Council directed the city manager to continue following the governor’s executive order and encouraged members of the public to speak at the July 9 meeting.

“My only concern is the health and welfare of this community — my hometown,” Govea said. “My concern is the spreading of this virus. I hate that it has become political and so emotional.”

Govea said a mask has shown to help minimize the spread.

“I wear a mask in public because I don’t want to be the one to share the virus with my family or my community,” Govea said. “I would like to think that at least 75 to 80 percent of the public would follow the ruling of wearing a mask if it were a law, not just because they might get caught, but because they don’t want to take a chance of sharing the virus.”

A handful of people spoke during the public comment portion of the County Commission meeting before the vote took place.

“I’ve seen so much misinformation on Facebook,” Smail said, adding that he thinks the mask mandate is the right move for the economy and residents.

Josh Barnett said he doesn’t believe masks should be mandatory, and he mentioned that he has a family member with asthma who wouldn’t be able to wear one.

Lorranda Baldridge also spoke out against the mask mandate.

“I, personally, would like to have the right to choose for ourselves,” she said, adding that she doesn’t believe it would be enforceable.

Michelle Kaiser, who owns Town Square Event Design in Paola, said the mask mandate would cripple her already struggling business because clients have told her they will postpone events if guests are required to wear a mask.

Each commissioner also spoke before they voted, explaining that a majority of the constituents they have heard from have asked them to overrule the mandate and not make masks a requirement.

Commissioner Tyler Vaughan said his decision is not a political one, he just doesn’t believe in additional government control and he doesn’t think the mandate would be enforceable.

“I will adamantly stand against government oversight,” Vaughan said. “I’m not going to be a part of telling you what to do.”

Commissioner George Pretz said he wants Miami County residents and business owners to be able to make their own decisions.

“We want you to guide yourself and your family,” he said.

Commissioner Rob Roberts said he believes residents will be able to make the best decisions for them and their families without government taking away their rights. He added, though, that he understands the seriousness of the virus, especially after recently losing a friend to COVID-19.

“Please, if you are sick, stay away from other people,” Roberts said.

The commissioners also clarified that individual cities, school districts and businesses in Miami County may choose to set their own mask requirements.

Kelly said in issuing the mask mandate that until a vaccine is available, residents can protect themselves by practicing social distancing, staying home when they are sick and wearing a mask.

“If we want a healthy Kansas economy, we need healthy businesses and healthy Kansans,” she said. “COVID-19 is still in our communities, and it is still spreading.”

Really? Even Johnson County Commissioners knew better than to override Gov. Kelly's mandate for masks in public. The USA topped 50k new cases of Covid-19 in ONE day. We are seeing HUGE spikes all around--IF you all think you can open schools up to in person-teaching in a little over a month- you ought to try to lower the number of Covid-19 cases anyway you can. Miami County has gone from a steady 4- up to now 31 cases! How much higher do you want it to go before you do the responsible thing and require masks? How hard is it to do something that is right for everyone and is temporary? This is a medical, National Crisis. You ought to act responsibly and do the right thing. People live in this county who are immune compromised and older, they cannot just stay home too. Some have to get out- so why not protect them and yourselves during a health crisis? This is the most ridiculous vote and thing I have ever seen. WAKE UP AMERICA!

I just wanted to add- this has NOTHING to do with politics, it has to do with doing what is right. People are so worried about the almighty dollar and their businesses. I gotta tell ya--I won't be giving my dollars to MICO during this- I'll shop where I feel safe and important. Love thy neighbor as yourself. We are so focused on being politically correct in this Country that it is causing us to stumble using common sense. People often do NOT know they are carrying Covid-19--masks are not totally perfect, but if EVERYONE had one--it would greatly reduce the exposure.

we have someone in this group of leaders who actually is known to have attempted suicide and is now telling others what they need to do to protect life when he didnt care about his own?

are you going to deny this comment too because its the truth?

suddenly an unstable person needs to tell me what to do?

and we are to wear them until a vaccine is made available..

so now this is perminent?

ppl this is unconstitutional!!!