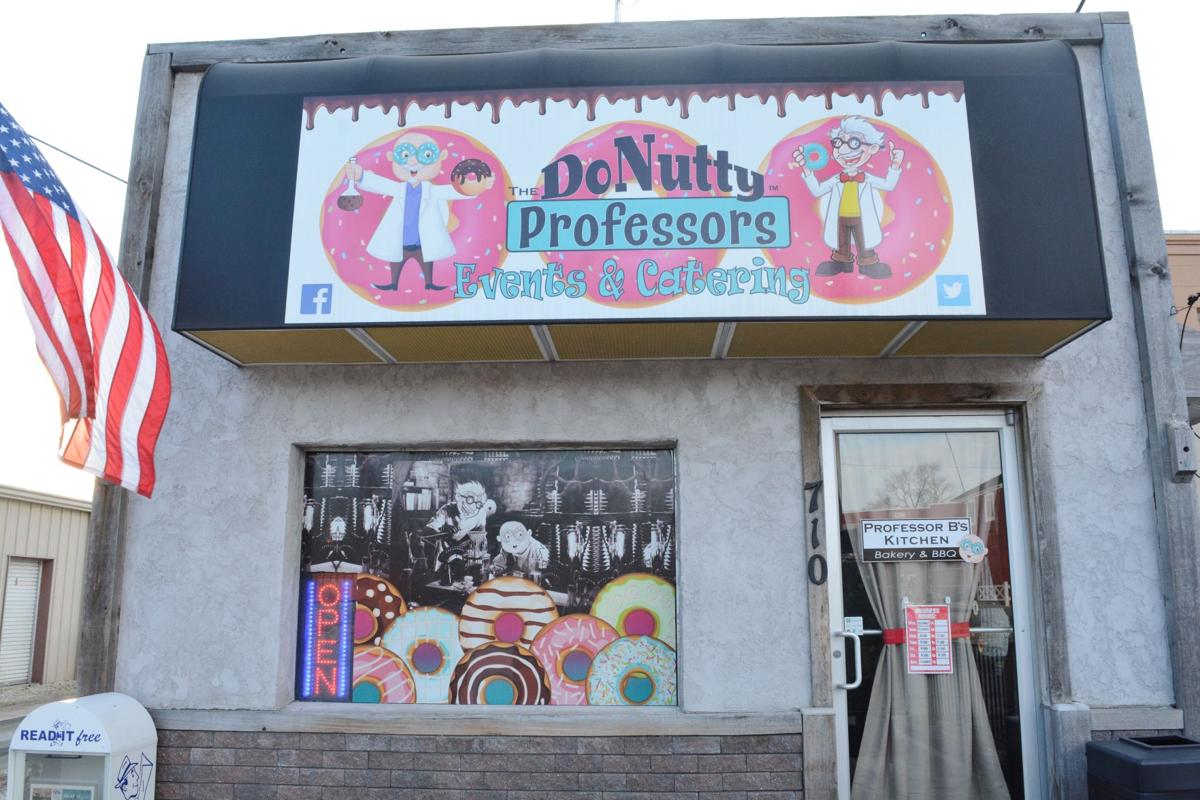 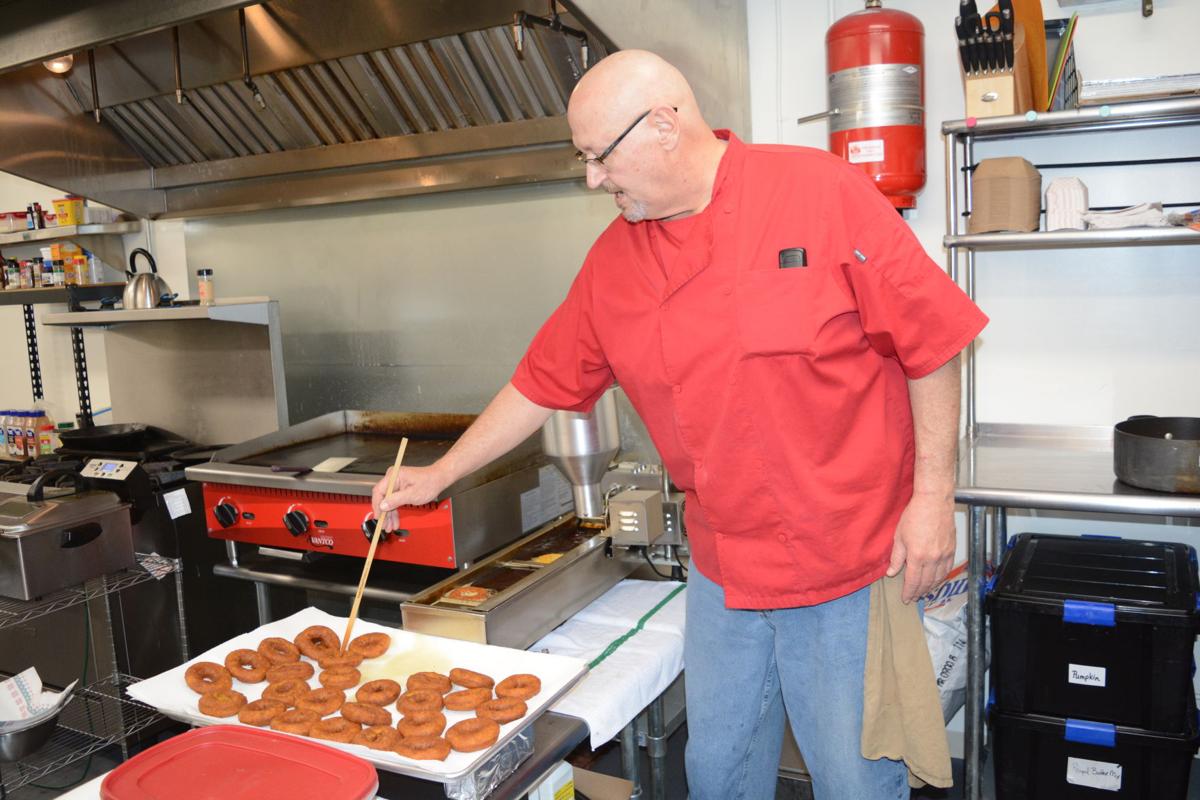 Bruce Sharp makes some pumpkin donuts inside his new kitchen at 710 Sixth St. in Osawatomie. 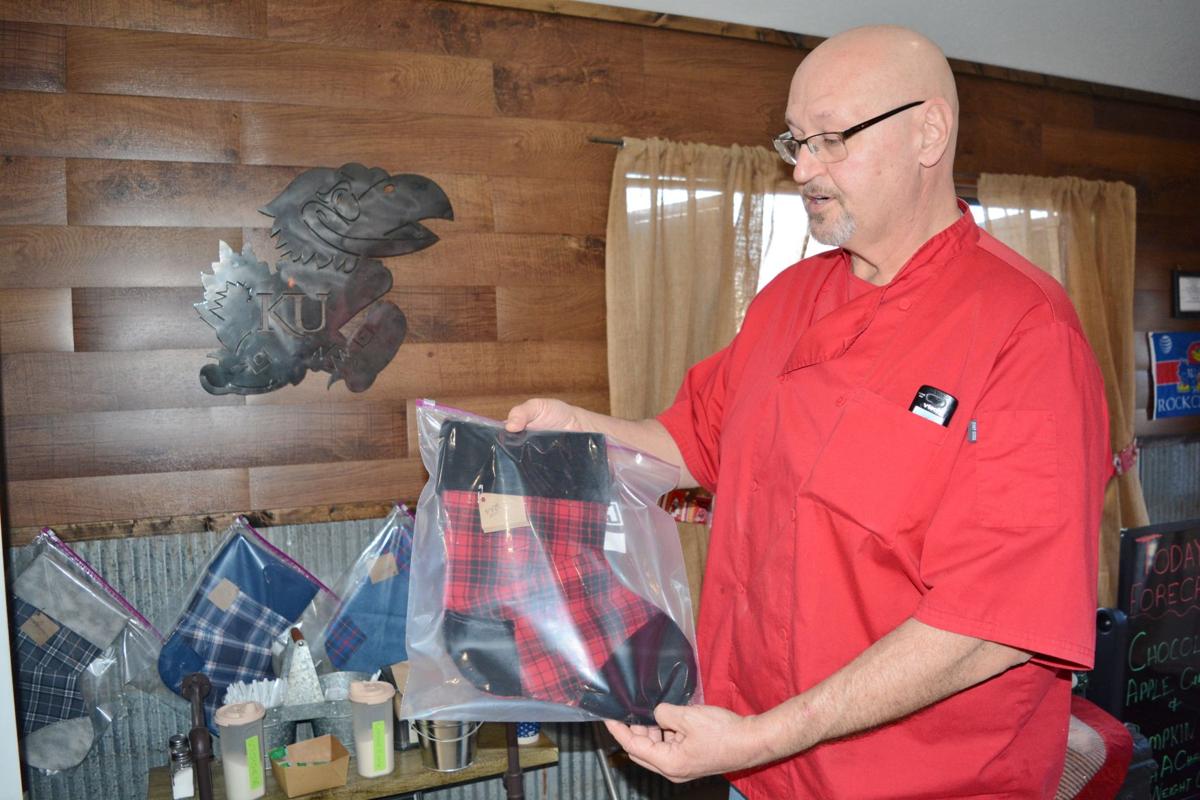 Bruce Sharp holds up a handmade Christmas stocking made by his girlfriend Sandy Wood. The stockings are for sale inside his business at 710 Sixth St. in Osawatomie. 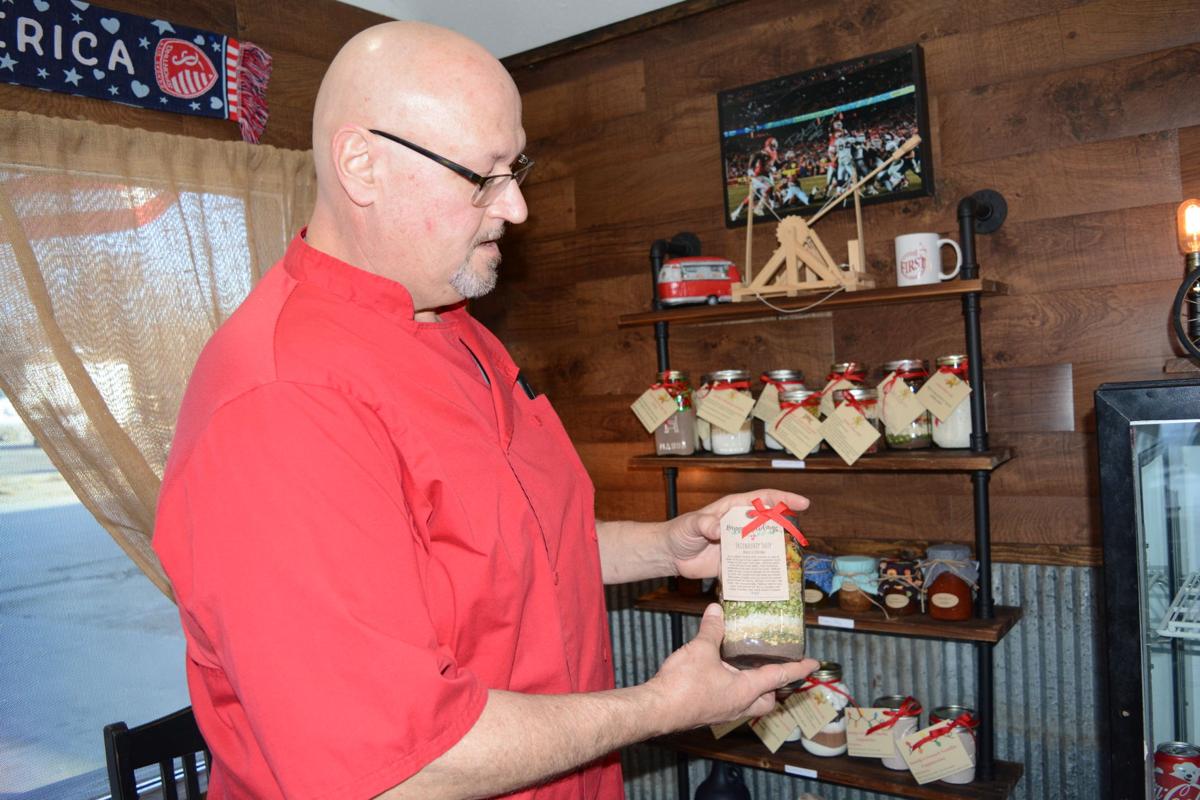 Bruce Sharps talks about some of the specialty soup mixes that are for sale inside his business in Osawatomie. 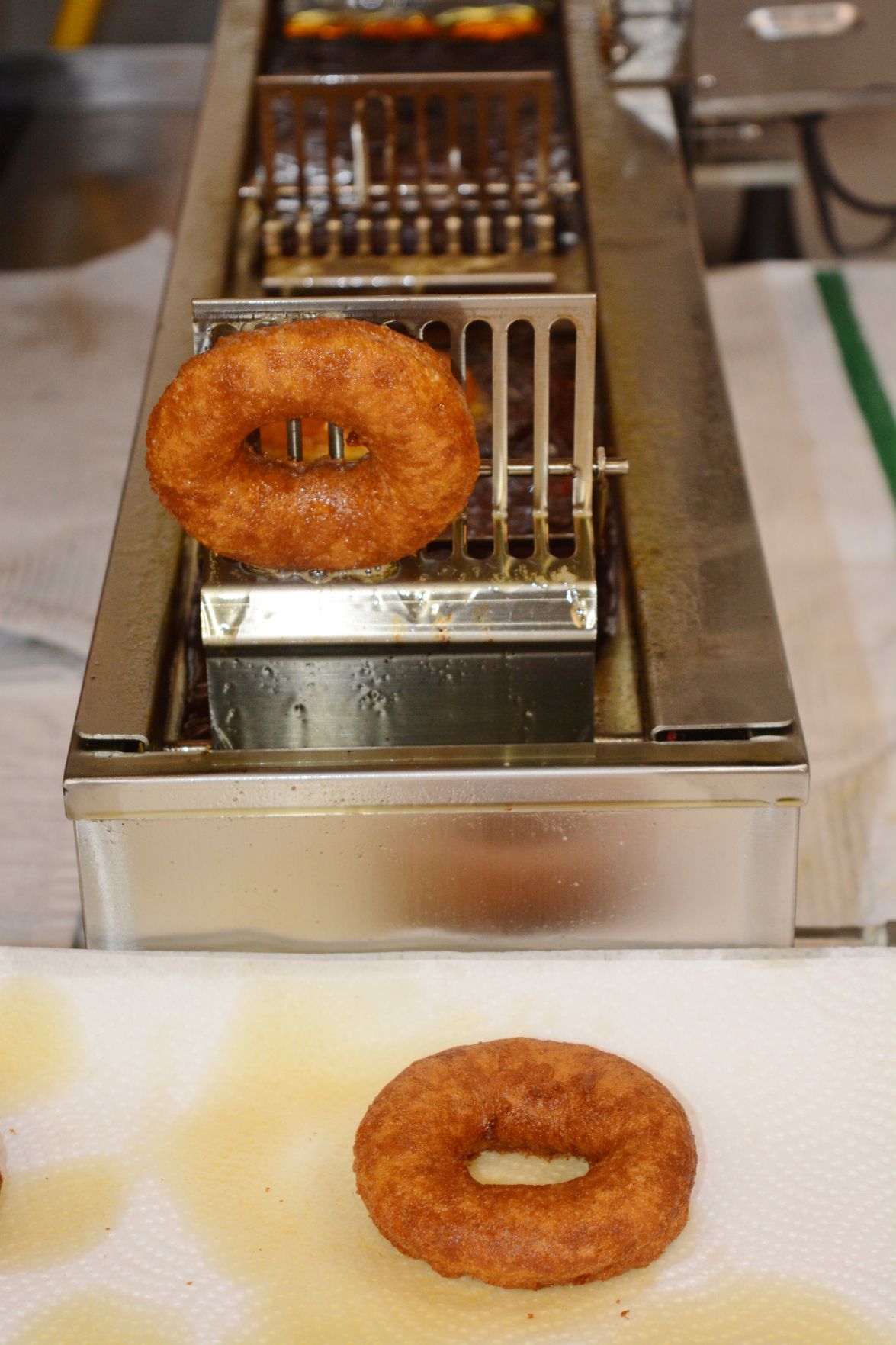 The donut maker inside Professor B’s Kitchen in Osawatomie flips over some pumpkin donuts. 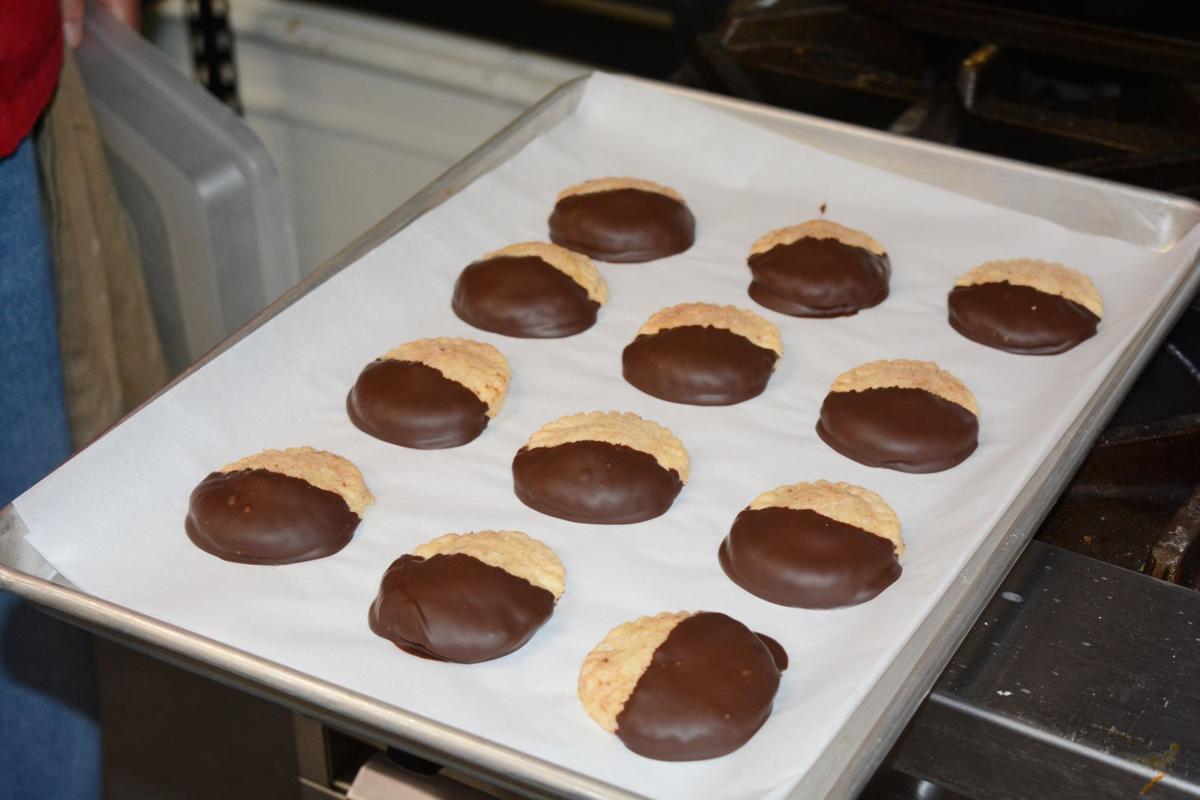 Bruce Sharp loves experimenting inside his kitchen. One of his latest creations is peanut butter pies dipped in chocolate. 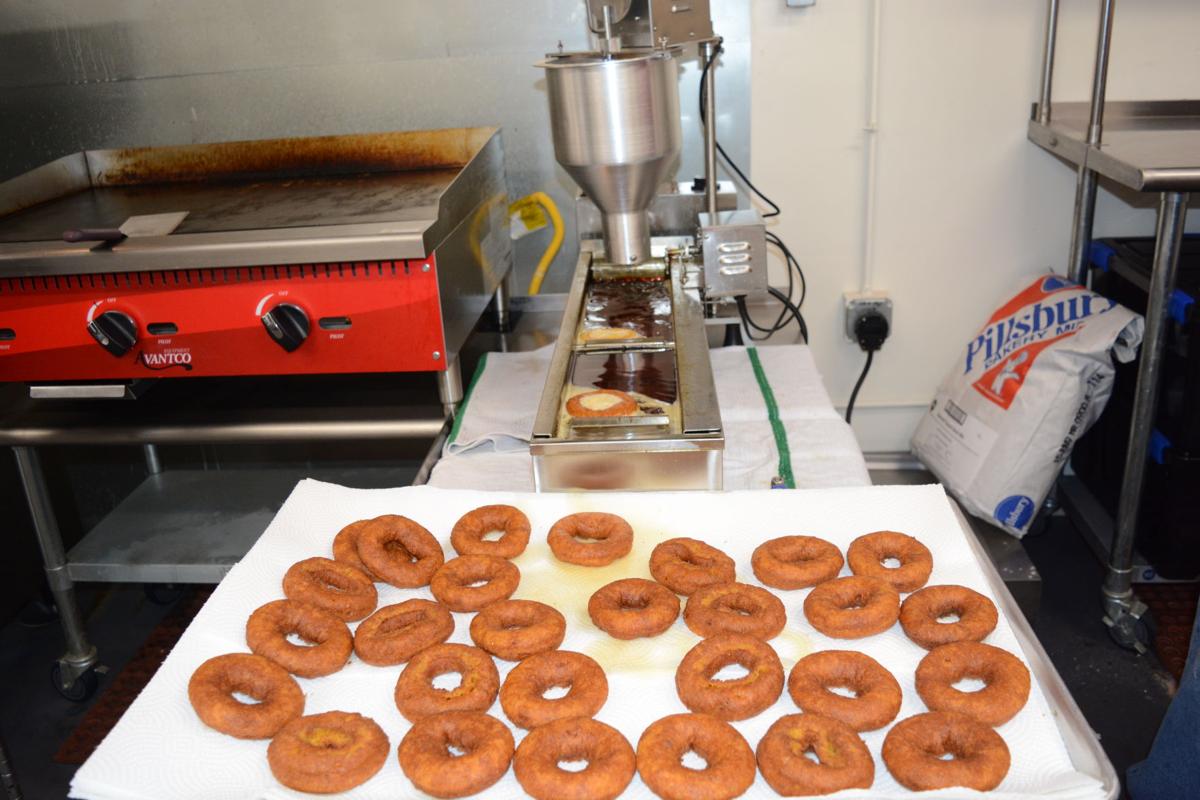 Bruce Sharp makes some pumpkin donuts inside his new kitchen at 710 Sixth St. in Osawatomie.

Bruce Sharp holds up a handmade Christmas stocking made by his girlfriend Sandy Wood. The stockings are for sale inside his business at 710 Sixth St. in Osawatomie.

Bruce Sharps talks about some of the specialty soup mixes that are for sale inside his business in Osawatomie.

The donut maker inside Professor B’s Kitchen in Osawatomie flips over some pumpkin donuts.

Bruce Sharp loves experimenting inside his kitchen. One of his latest creations is peanut butter pies dipped in chocolate.

OSAWATOMIE — Bruce Sharp loves his new kitchen — although it might be more appropriate to call it a laboratory.

Inside his recently opened catering and carry-out restaurant at 710 Sixth St. in Osawatomie, Sharp has fun experimenting with ingredients to create delicious desserts, mouth-watering BBQ dishes, juicy hamburgers and everything in between.

Local residents may recognize The DoNutty Professors name and logo from the popular food truck that Sharp and Shawn Turney teamed up to start in 2017.

The truck was a staple at places like the Paola Farmers Market, and Sharp said he also got a lot of business setting up at the intermodal facility near Gardner and Edgerton.

Although business was good, Sharp said he was cramped inside the small kitchen, and it was a pain to continually haul the 50-watt generator back and forth.

His solution was to purchase the Osawatomie building last year and install a full-scale kitchen.

Now operating as a sole business owner, Sharp opened Professor B’s Kitchen Bakery & BBQ at the location in July. It wasn’t the smoothest of openings since the donut maker blew up and the smoker wasn’t ready on the first day.

“I basically started a donut shop without donuts and a barbecue place without barbecue,” Sharp said.

Since then, though, Sharp has worked to build a strong customer base during the past five months.

It helped, Sharp said, that many of the loyal food truck customers have stuck with him. Many of them were already hooked on his specialties like the Colorado green chile breakfast burrito.

He also has new regulars who frequently call him or check out his Facebook page at www.facebook.com/donutscience/ to see what new creations he is offering.

“Whenever I make lemon bars, I have to make at least two batches because I have one customer who will come in and buy an entire batch,” Sharp said.

Some of his most popular treats are his sundaes that don’t actually include ice cream. His caramel apple sundaes feature an apple cider donut topped with apple pie filling and drizzled with caramel syrup. His blueberry lemon sundae features a lemon donut with blueberries on top and a dab of lemon curd in the middle.

Sharp said he is always looking to try something new. One of his most recent creations is small peanut butter pies dipped in chocolate.

Despite the DoNutty name, Sharp said his most popular item with customers is actually his cheeseburgers.

In fact, the burgers are so tall once they have all the fixings that Sharp has trouble wrapping them completely in paper. He highlighted the problem in one of his burger ad campaigns with the tagline: “Your buns are showing.”

Humor is something Sharp has always embraced, which is why he chose the fun DoNutty name to begin with. He’s also had fun paying homage to the building’s former use of a liquor store by selling his donuts in six-packs and 12-packs.

“If it’s been a bad day, you can get a case of donuts,” Sharp said with a smile.

Those who walk into the building on Sixth Street will see a smoker out front, and that’s where Sharp smokes brisket, pulled pork, ham, bologna and more.

And just like with his desserts, Sharp has fun experimenting with different barbecue creations. One day, after making taco salad, Sharp realized he had a lot of Fritos left. He ended up tossing some in a paper boat, pouring some baked beans on top, and adding brisket, cheesy corn and barbecue sauce for a tasty lunch for himself.

When someone else said it looked delicious, Sharp made more and advertised it to his customers, and he nearly sold two whole briskets worth the rest of the afternoon.

One of Sharp’s newest ideas is to create hearty home-cooked meals that can be placed in containers and frozen for customers to take and eat at a later date. He’s calling them “Sunday Dinner” take-and-heat meals for two, and they will likely include things like meat and potatoes, lasagna, shepherd’s pie, chicken pot pie and more.

Sharp said he may eventually look for a larger location where customers could come in, sit down and eat, but for now he’s having fun coming up with new and tasty creations to offer his carry-out and catering customers.

“I’m resistant to menus,” Sharp said. “I’m not that type of place.”

While customers are waiting for their food inside the Osawatomie location, they can browse a variety of items made by Sharp’s girlfriend and business partner Sandy Wood, including Christmas stockings and specialty soup mixes.