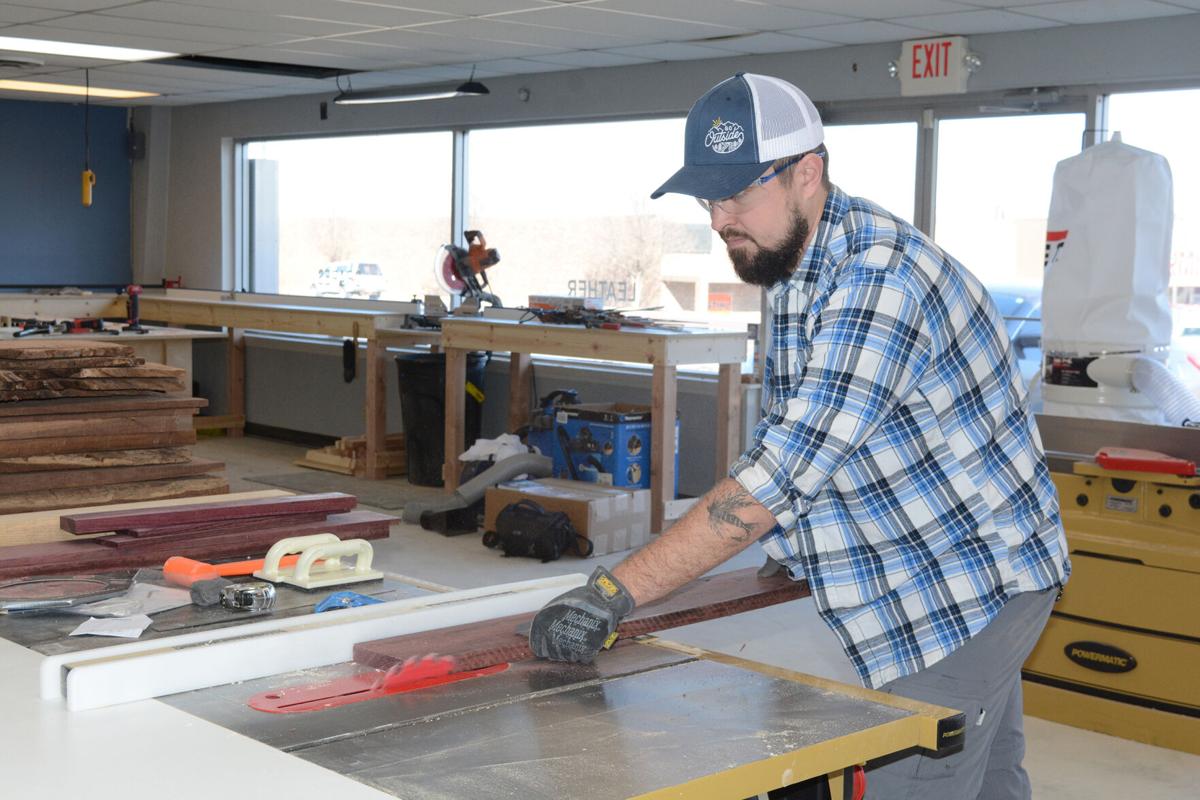 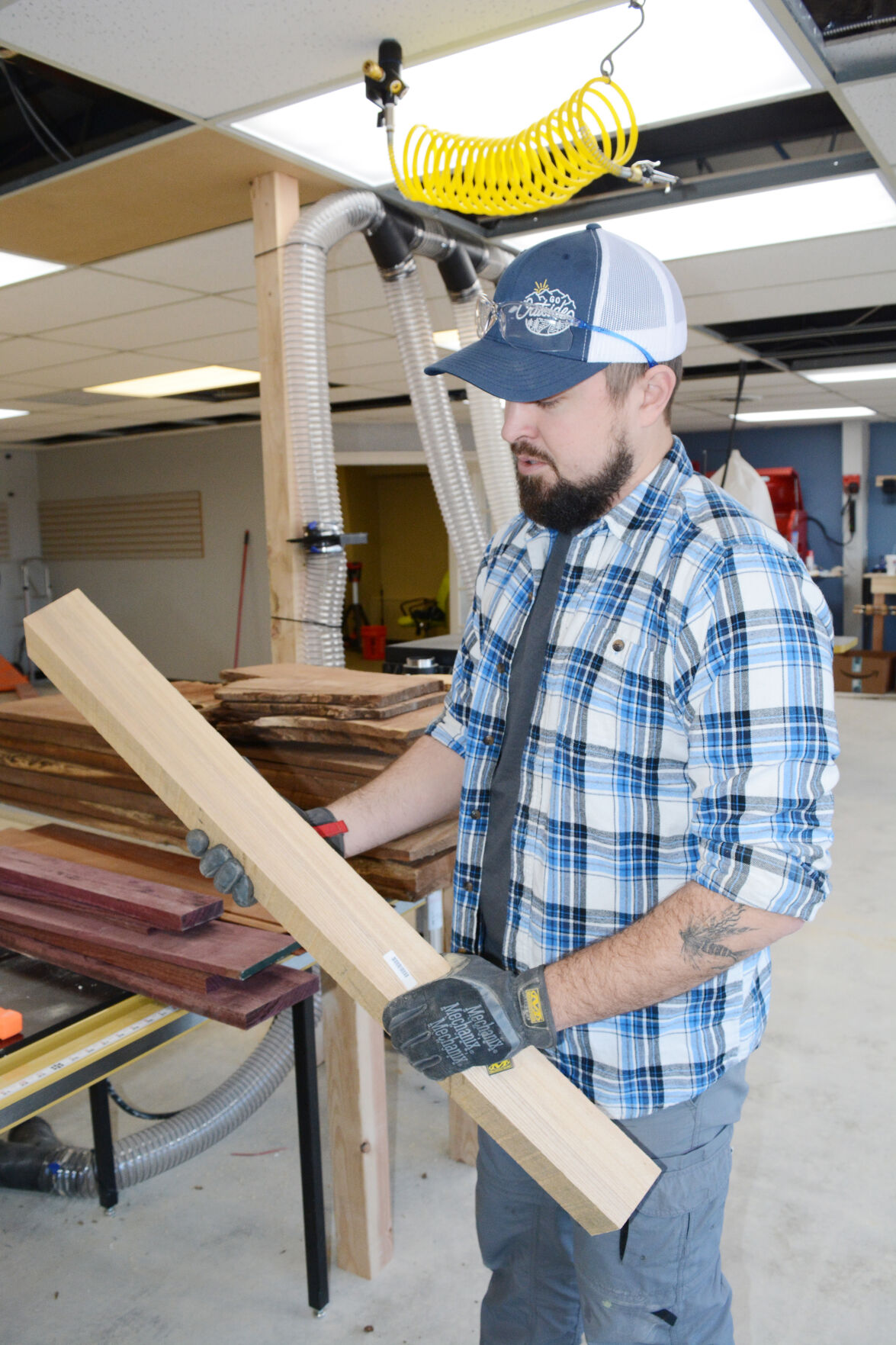 Jesse Hoehn talks about the different grains of wood inside his workshop at 1005 Baptiste Drive in Paola. 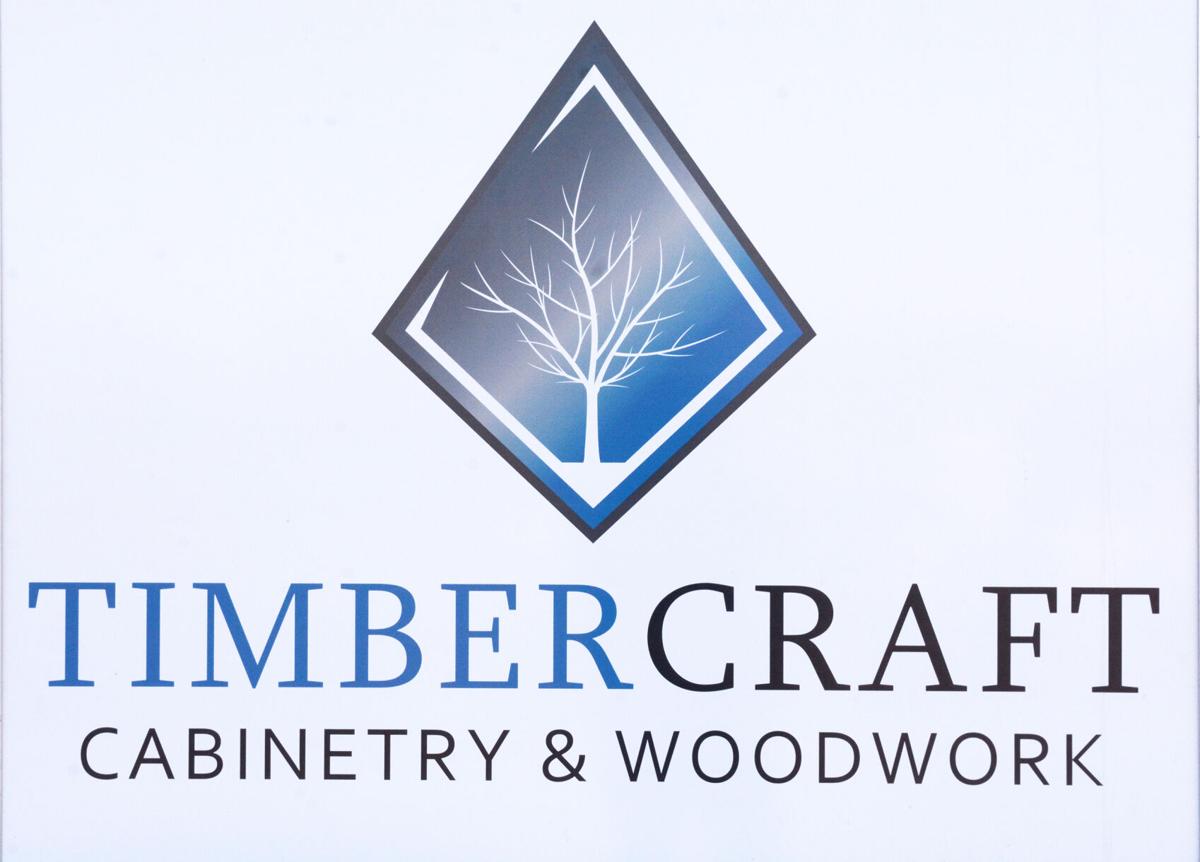 Jesse Hoehn talks about the different grains of wood inside his workshop at 1005 Baptiste Drive in Paola.

PAOLA — For Jesse Hoehn, 2020 wasn’t highlighted by a global pandemic. Instead, it was the year he finally launched his own business and welcomed his first child into the world.

Jesse is a 2007 Paola High School graduate, and his new business allows him to pursue a passion that was first cultivated during woodworking classes at PHS.

He said he learned a lot from his instructor, Doug Walker, and he later went to work for Walker’s woodshop in Osawatomie.

He then spent several years gaining experience in different positions while working to help support himself and his wife, Ali.

He worked on some high-end cabinetry projects for the Mission Hills area while employed by Superior Woodcraft in Kansas City, Mo., and he gained additional experience at Timberline Cabinetry and Millwork after moving to Manhattan while Ali was attending Kansas State University.

“The end goal was always that I wanted to open a shop,” he said.

The couple eventually moved back to Miami County, and last April they welcomed their baby boy, Jace. Jesse said it was Ali who convinced him to follow his dreams.

“She said, ‘why don’t you start a woodshop?’” Jesse said.

Knowing that he was going to need help putting together a plan, Jesse turned to the Small Business Development Center at Johnson County Community College.

There, he worked with officials to develop a business plan, including financial projections for the first three years. He also worked closely with Miami County Economic Development Director Janet McRae, who helped Jesse become the first Miami County new business owner to utilize an E-Community loan.

The E-Community loan worked in tandem with a traditional loan Jesse acquired from Landmark National Bank. Jesse said the bank loan helped him purchase the equipment he needed to get started in the shop, while the E-Community loan gave him money to spend on working capital for startup costs like insurance, utilities and the first month’s rent.

McRae said the E-Community loan can’t happen without there already being a bank loan, and it is designed to strengthen the stability of the financing process.

“The E-Community program doesn’t make a bad loan good, but it does make an iffy loan possible,” McRae said.

In the summer of 2019, Miami County became an E-Community, and the program was placed under the direction of the Greater Miami County Economic Development Corporation. Through its partnership with NetWork Kansas, the group facilitates a locally-controlled revolving loan fund to supply entrepreneurs with capital.

More information about the loan program can be found online at www.thinkmiamicounty.com.

After six months of planning, Jesse finally set foot inside the home of his new business on Baptiste Drive in December, and he got to work tearing up the carpet and turning the spacious building into a workshop.

He’s now up and running, and he said he’s already getting more jobs than he ever hoped for. Some of his work orders include bookcases, vanities and cabinets, in addition to the work he is doing on his father-in-law’s kitchen. He’s also getting quotes from local contractors.

“The remodeling and building industry is booming,” he said.

For more information about Jesse’s business, visit his website at www.timbercraftwoodwork.com.