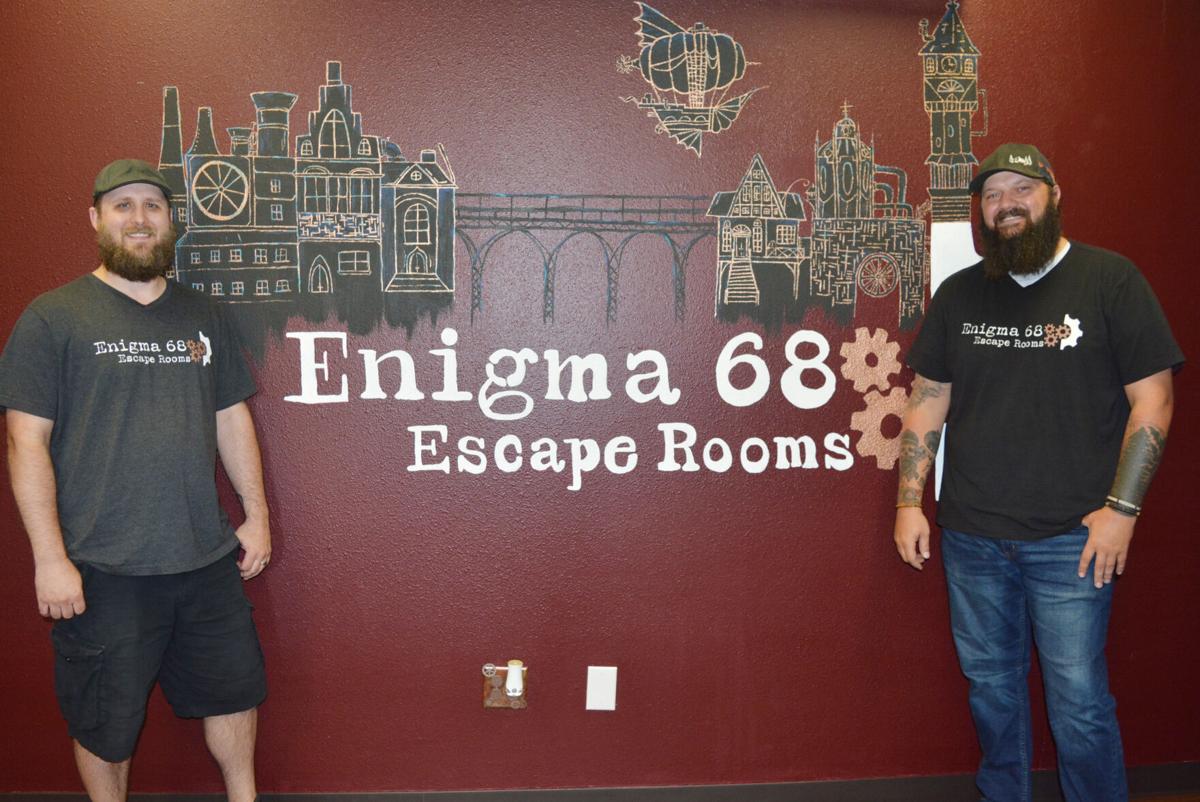 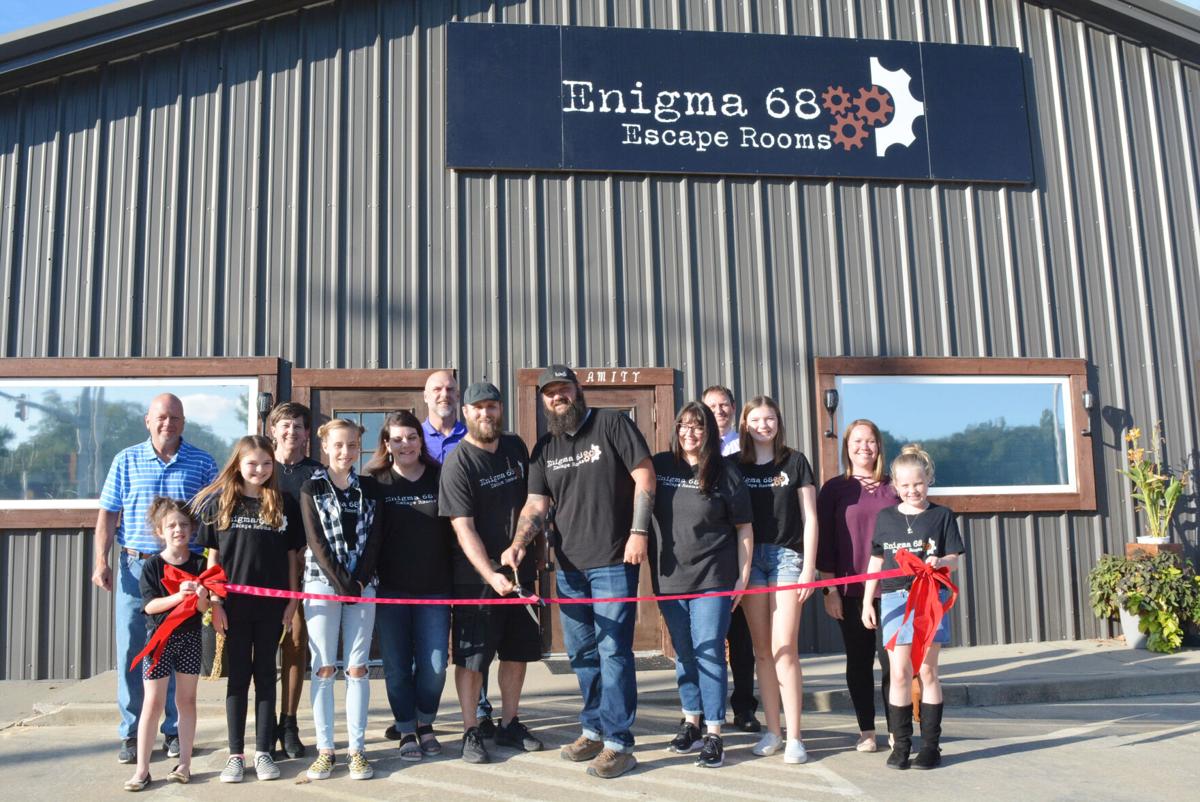 Members of the Louisburg Chamber of Commerce conducted a ribbon cutting at Enigma 68 Escape Rooms on Thursday, Oct. 7. 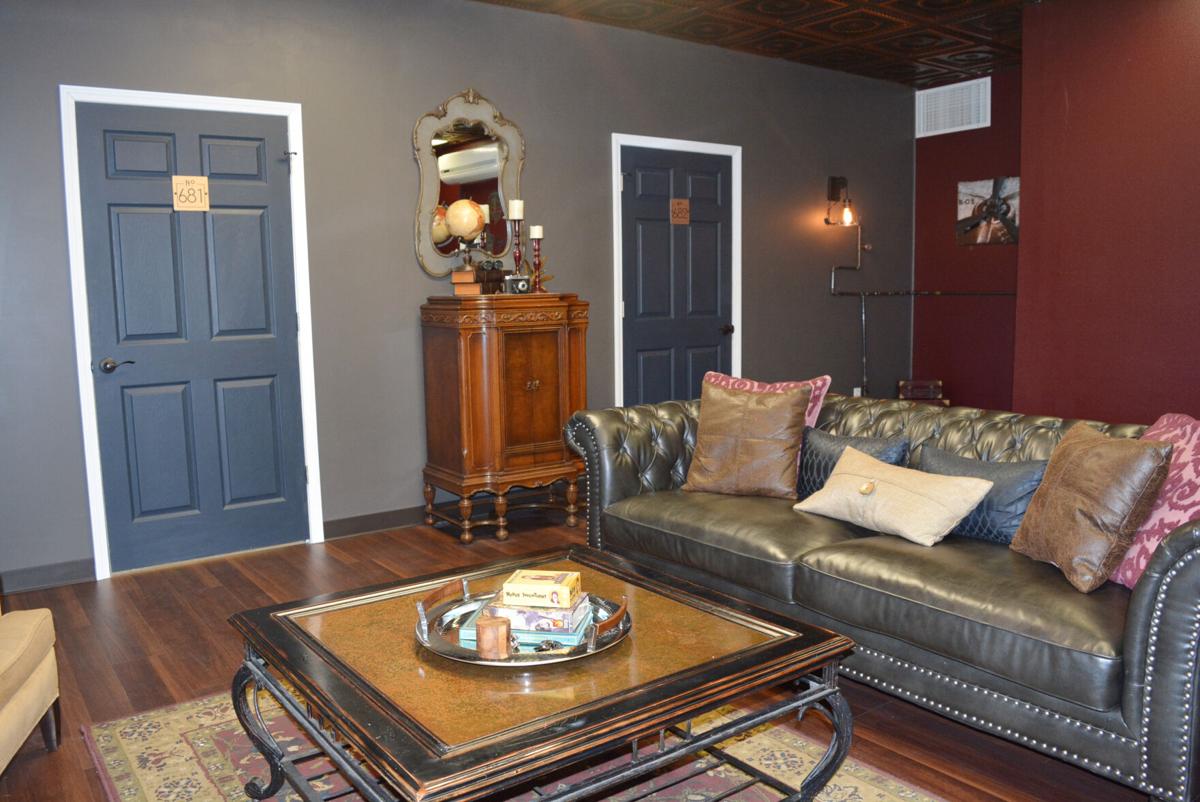 Enigma 68 Escape Rooms currently offers one room, but two additional rooms are also in the works. 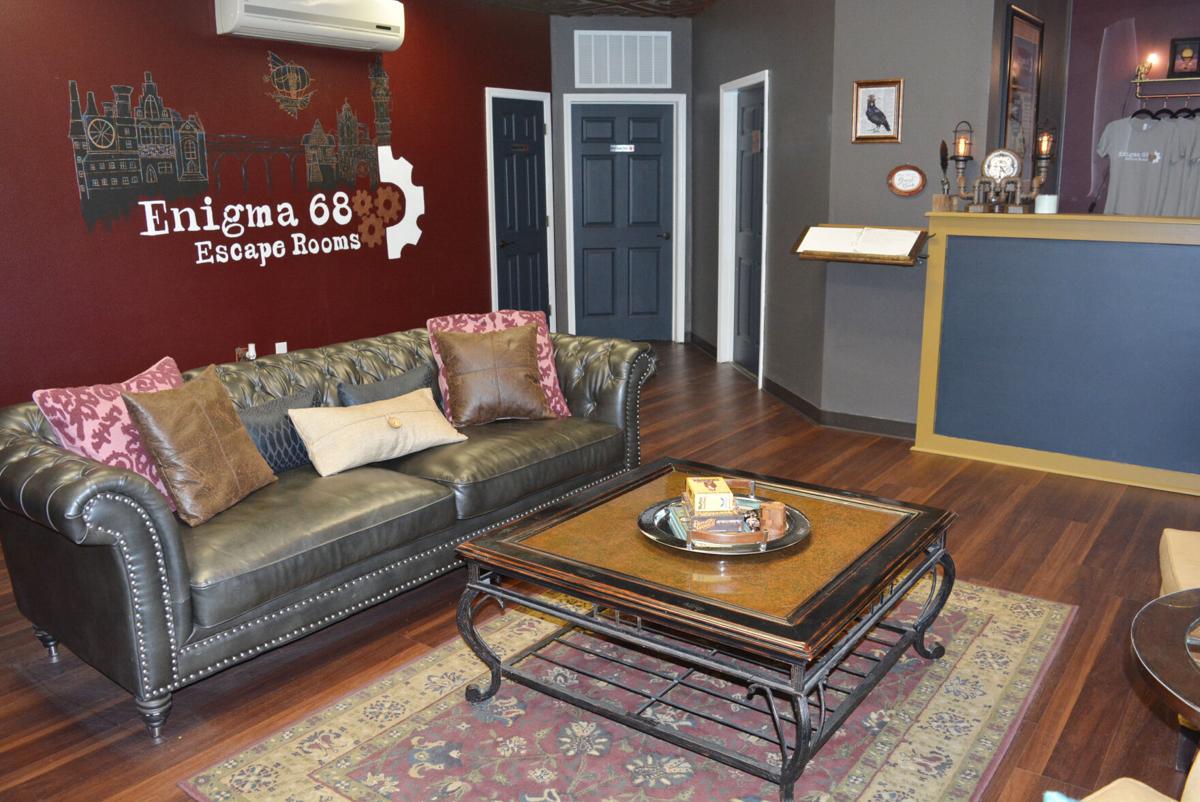 The lobby for Enigma 68 Escape Rooms has a steampunk theme.

Members of the Louisburg Chamber of Commerce conducted a ribbon cutting at Enigma 68 Escape Rooms on Thursday, Oct. 7.

Enigma 68 Escape Rooms currently offers one room, but two additional rooms are also in the works.

The lobby for Enigma 68 Escape Rooms has a steampunk theme.

LOUISBURG — Escape rooms have continued to grow in popularity during the past decade, and Jacob Vickrey and Levi Fyock are two of the many people who have embraced the concept.

They love the challenge of trying to decipher clues and solve a puzzle; they love the videos, props and storylines that allow the participants to immerse themselves into a world of fantasy; and they love the excitement of working as a team to try and escape a room within a 60-minute timeframe.

After trying most of the rooms offered throughout the Kansas City Metro region, the pair of friends decided they would create an escape room of their own in Louisburg to give local residents an opportunity to experience the fun, while also attracting visitors from throughout the region.

Vickrey got an idea for their first room while sitting up watching TV one night, and he immediately started jotting down his plan for the story, puzzles and room layout in a notebook. He then built a digital version of the escape room using the Minecraft video game.

From there, things started progressing rather quickly. The friends created a business plan and found the perfect location inside a building at 2 E. Amity St. at the corner of Metcalf Road and Kansas Highway 68. The building is next to the Timbercreek event center. Vickrey said Timbercreek’s owners also own their building, but it was mostly just being used for storage.

Ever since they got inside earlier this spring, they have been busy transforming it into an immersive escape room business with décor that gives the lobby a steampunk feel.

Their first room, called “The Forge,” brings Vickrey’s initial idea to life. Up to eight participants will become part of a story involving a young blacksmith who is in love with a noble woman. Their love is forbidden, but true love cannot be denied. The blacksmith will soon fight for her hand in marriage in a tournament. Escape room participants must prepare him for battle and arm him with a sword so that he may slay the competition and fulfill his destiny.

Vickrey and Fyock said they found a person online to create the intro video to the room, and they couldn’t have been happier with the result. They also had fun crafting and building the unique puzzles for the room.

They wanted to make it challenging, but not impossible. During their beta testing, they sent 29 people through the room to get a feel for how participants react to the clues.

Those who have done escape rooms before will be familiar with the setup. Vickrey and Fyock said there is a camera and microphone in the room, and one of them will be watching the participants and providing clues if the participants ask for help. The other will be working the front desk and greeting new customers.

The pair of entrepreneurs are also getting support from their families, including their wives Korissa Vickrey and Jennie Fyock.

The business is called Enigma 68 Escape Rooms in honor of its location on K-68. Jacob and Levi said they hope their location also helps out the restaurants that are right around them.

The grand opening of the business took place Thursday, Oct. 7, and members of the Louisburg Chamber of Commerce were on hand for a special ribbon cutting.

The business will be open from 1 to 9 p.m. Tuesday through Thursday and from 10 a.m. to 11 p.m. Friday and Saturday. The owners said they offer large group and military discounts.

Although they opened with just the one room available, Jacob and Levi said plans are already in the works on two other rooms. One will be called “The Lab” and the other is expected to have a Hansel and Gretel theme.

More details about the rooms and how to book them can be found online at enigma68.com.