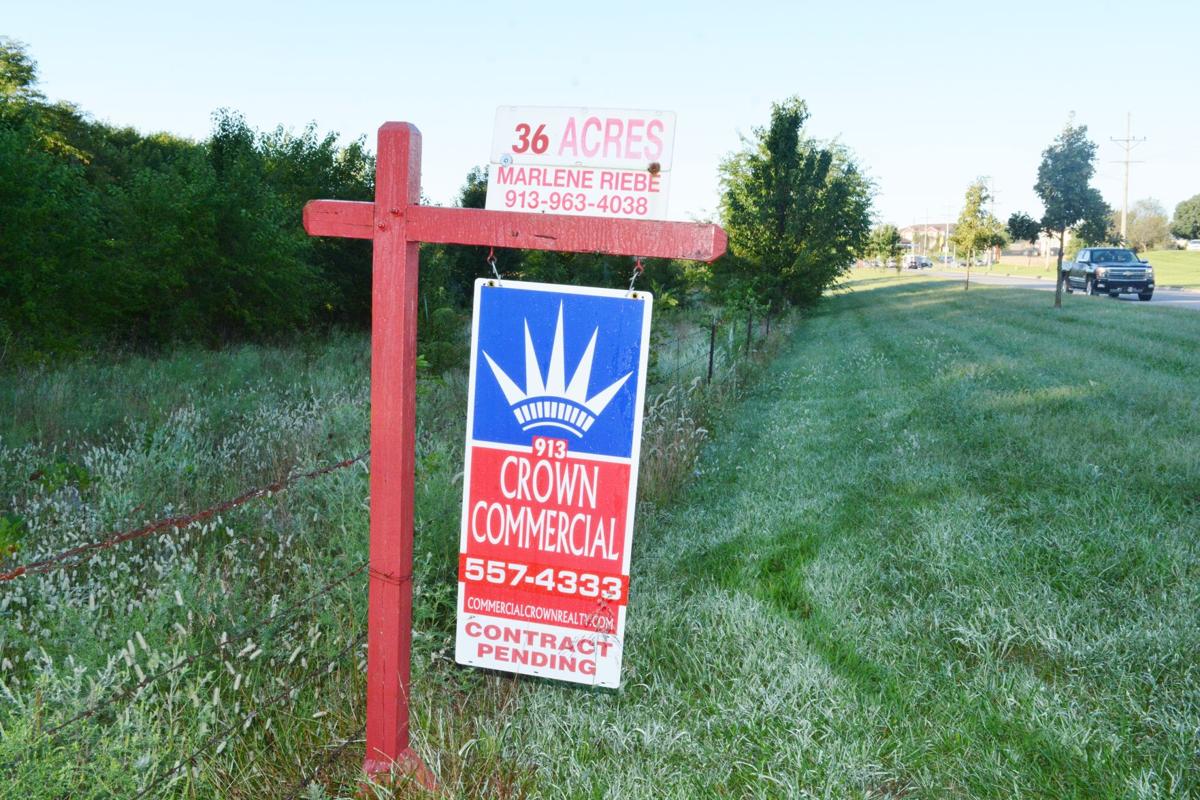 The city of Paola is proposing an incentive package to encourage development on the 36-acre former Ursuline Sister pasture property near the entrance to the city along Baptiste Drive and Hedge Lane. 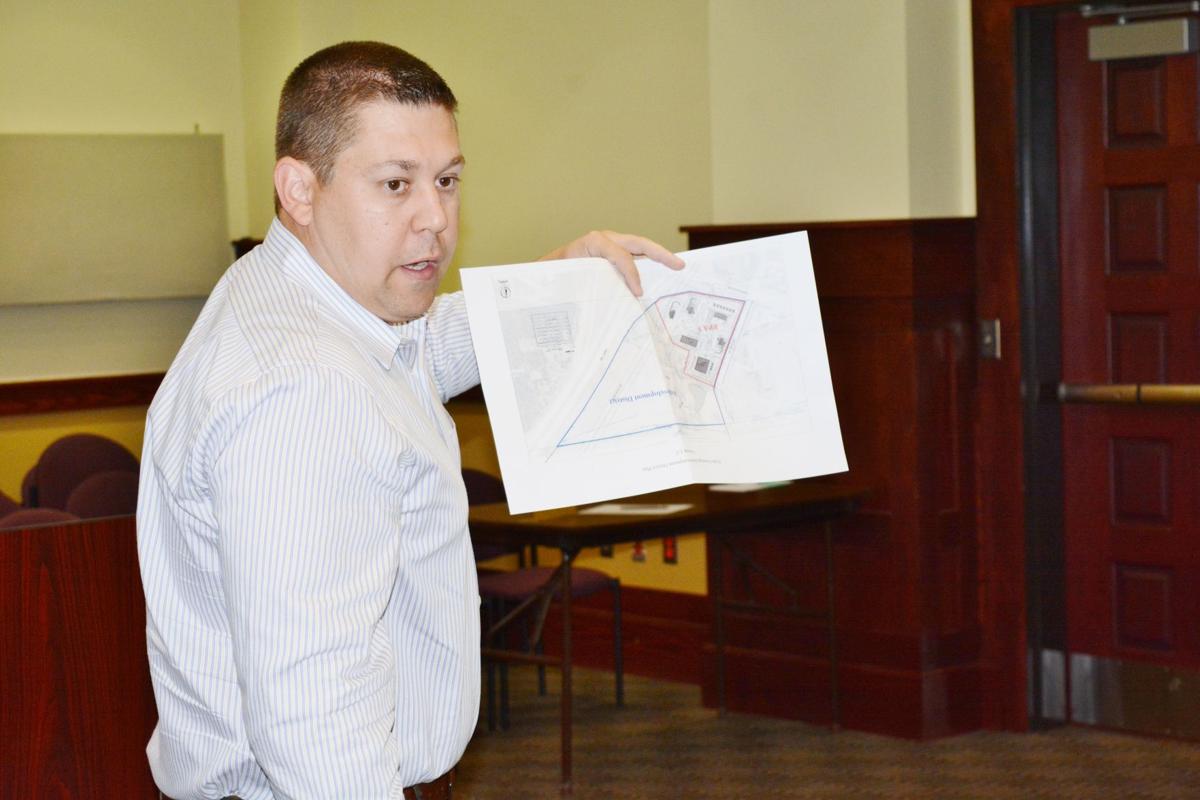 Chris Williams of Highlands Development talks to Paola City Council members about his plans for the Paola Crossings development on 36 acres near the intersection of Baptiste Drive and Hedge Lane.

The city of Paola is proposing an incentive package to encourage development on the 36-acre former Ursuline Sister pasture property near the entrance to the city along Baptiste Drive and Hedge Lane.

Chris Williams of Highlands Development talks to Paola City Council members about his plans for the Paola Crossings development on 36 acres near the intersection of Baptiste Drive and Hedge Lane.

PAOLA — Visibility has never been the problem for the 36-acre former Ursuline Sisters pasture land that sits just off the exit ramp from U.S. Highway 169 into Paola.

Nestled in between the high-traffic roadways of Baptiste Drive and Hedge Lane, just east of Paola’s Walmart, the large tract of land is passed by a bevy of motorists every day.

But every time a developer has shown interest in the property in the past, the outcome has always been the same. The topography of the land would require too much costly dirt work on the front end, and the numbers just didn’t work for development.

In fact, in the 12 years that City Manager Jay Wieland has held his position, he’s only been approached by two developers about the land, and both were quickly scared off by the estimated cost of development.

So when a third potential developer showed up more than a year ago proposing a partnership with the city, Wieland and his fellow city officials were ready to listen.

After nearly 19 months of planning and negotiating, the details of the incentive package the city and developer are proposing were revealed during a special Paola City Council meeting Tuesday, Aug. 27.

Wieland said TIFs are state-approved incentives that cities can use to encourage development. There are guidelines though, such as the “but-for” test that ensures a proposed project would not have occurred without the incentive. Wieland said that is certainly the case with the Ursuline pasture property, which has been vacant for decades.

TIFs divert future property tax revenue increases from a defined area or district toward an economic development project in the community. Wieland said the proposed plan isn’t a typical TIF, though, as the city won’t be issuing any bonds to fund initial excavation or infrastructure work. Instead, the developer will be utilizing a pay-as-you-go approach in which he will put up the initial development costs and then be repaid with the incremental property tax increases from the land as it develops.

“The city’s risk is almost nil on a project of this nature,” Wieland said.

Other categories of property tax revenue, including a portion designated for schools, also cannot be captured by the developer, per state statute, Wieland said.

In addition to the TIF incentive, the proposal also includes the creation of a CID within the boundaries of the project. The district gives the developer the ability to establish a special sales tax for the development, as well as capture a portion of the city’s general sales tax.

Chris Williams with Highlands Development is spearheading the proposed project, and he spoke with council members during their meeting Aug. 27.

Williams said the project is being called Paola Crossings, and if it is approved, its development will be split into five phases, with a total estimated development cost of $14.6 million.

Williams said the development likely will feature a mixture of commercial tenants at the front end of the property along Baptiste Drive, with the possibility of residential properties being constructed on the back end. He said the focus will be on retail and office space, not big box stores.

The first phase will consist of six lots on about 10 acres near the intersection of Baptiste Drive and Hedge Lane, and it could take two to three years to complete.

“If we can build it out in the first year, we will,” Williams said.

The developer told the council members he has owned his own business for five years, and he has been involved in development for 15 years. He said he previously utilized the TIF incentive for the Briarcliff development in Kansas City’s northland.

Wieland said the proposed project doesn’t require approval from the County Commission, but the commissioners could vote to oppose it, which would keep it from moving forward.

Wieland met with county commissioners during their study session Wednesday, Aug. 28, and explained how the proposed TIF and CID funding instruments work.

County Commissioner Danny Gallagher asked what development costs are covered by the TIF.

Wieland said the developer could use the captured property tax dollars to pay for land acquisition and site preparation, which would include infrastructure costs such as streets and all utilities.

Wieland said that, based on the developer’s projections, the county’s estimated sales tax for the area once retail is on the site in year one would be $97,000.

Wieland referenced a recent meeting with Edgerton officials who talked about the success of the intermodal project.

“There was one comment they made that really stuck with me, ‘You gotta take chances to make things happen,” Wieland said. “The nice thing about this is the developer is the one whose neck is on the line. The city doesn’t have anything to lose on this. Even if the developer comes in and starts the development, the land falls in place and he walks away, the land is developed, which makes it attractive for the next person coming in. If he’s making that type of investment, he’s not going to walk away.”

Commissioner Rob Roberts said he has had two opportunities to review the proposal, and he also supports the project.

“I think this would be a great addition to the city of Paola and to the county,” Roberts said. “Retail coming into our community helps everybody. I think Jay and his team have done a good job of minimizing the risk … I wholeheartedly support it and I trust that our citizens will come to the table and do the same.”

The Paola City Council members also all expressed support for the proposed project, and they unanimously approved a resolution during their Aug. 27 meeting that schedules a public hearing to take place at 6 p.m. Oct. 8 at the Paola Justice Center to consider the creation of the Redevelopment District.

“There are so many positives to it,” Wieland said. “This is a great opportunity for this piece of property to be developed. It’s a win-win for the city and the developer.”