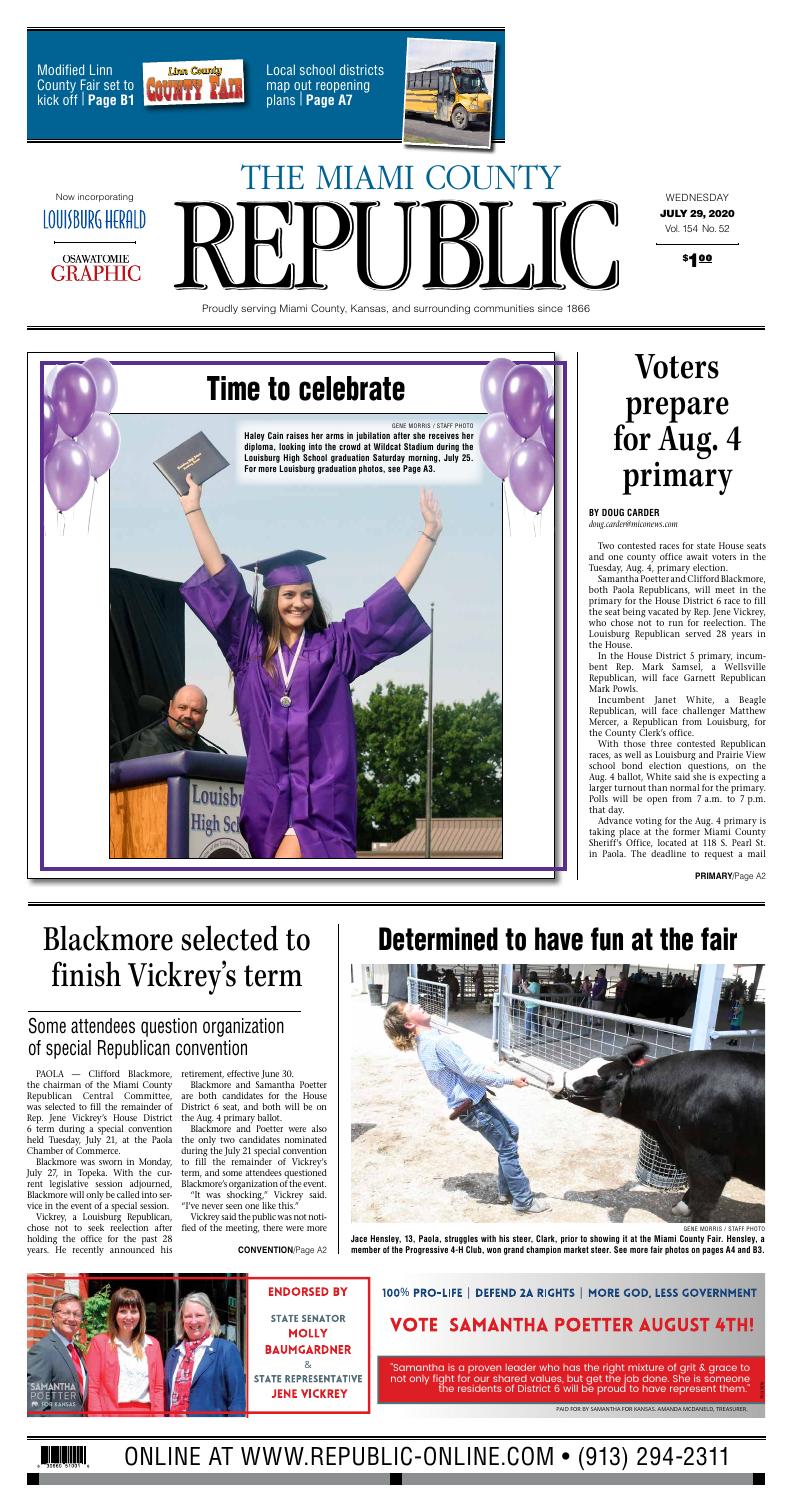 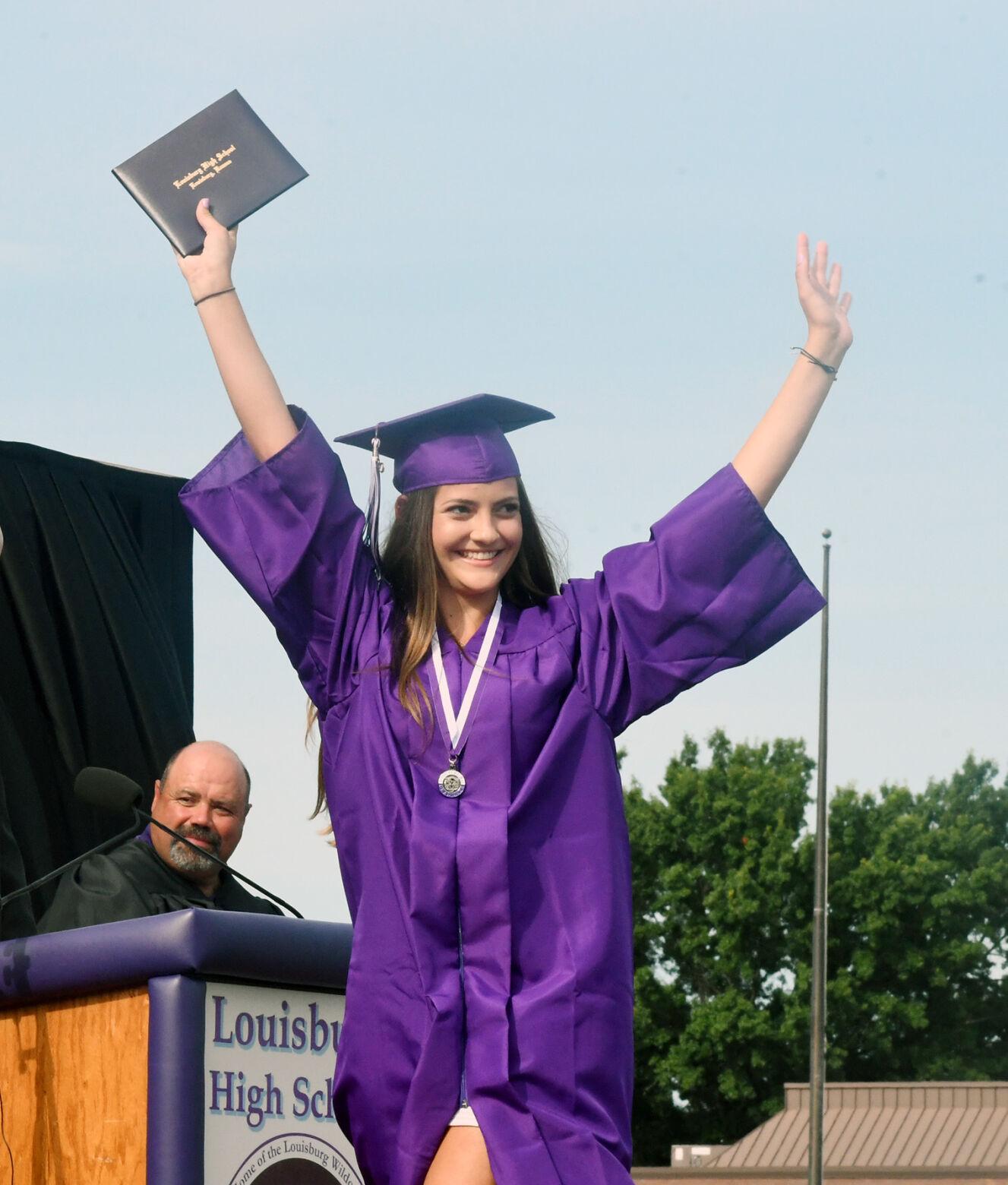 Haley Cain raises her arms in jubilation after she receives her diploma, looking into the crowd at Wildcat Stadium during the Louisburg High School graduation Saturday morning, July 25. For more Louisburg graduation photos, see Page A3. 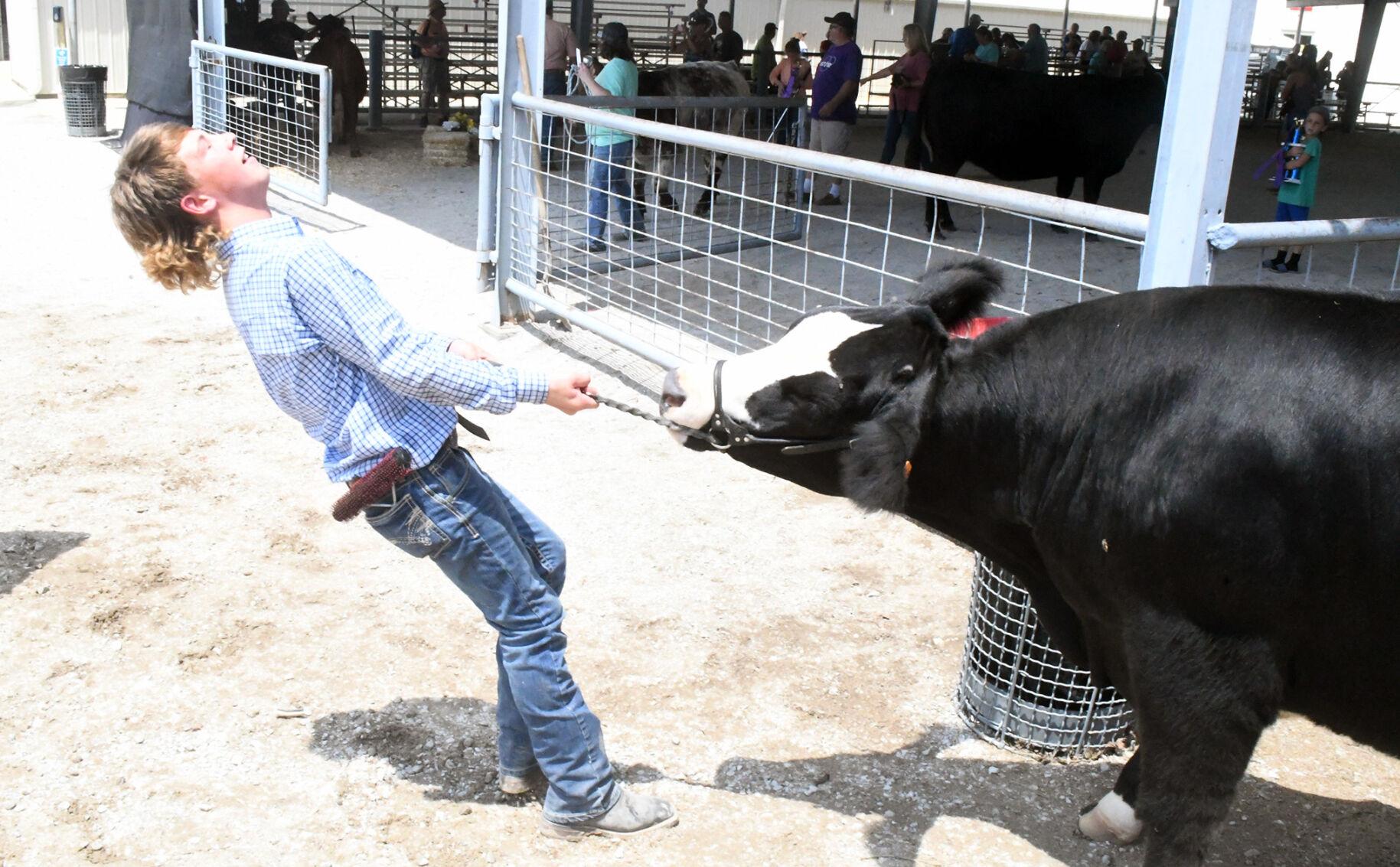 Jace Hensley, 13, Paola, struggles with his steer, Clark, prior to showing it at the Miami County Fair. Hensley, a member of the Progressive 4-H Club, won grand champion market steer. See more fair photos on pages A4 and B3.

Determined to have fun at the fair

PAOLA — Clifford Blackmore, the chairman of the Miami County Republican Central Committee, was selected to fill the remainder of Rep. Jene Vickrey’s House District 6 term during a special convention held Tuesday, July 21, at the Paola Chamber of Commerce.

Blackmore was sworn in Monday, July 27, in Topeka. With the current legislative session adjourned, Blackmore will only be called into service in the event of a special session.

Vickrey, a Louisburg Republican, chose not to seek reelection after holding the office for the past 28 years. He recently announced his retirement, effective June 30.

Blackmore and Samantha Poetter are both candidates for the House District 6 seat, and both will be on the Aug. 4 primary ballot.

Blackmore and Poetter were also the only two candidates nominated during the July 21 special convention to fill the remainder of Vickrey’s term, and some attendees questioned Blackmore’s organization of the event.

“It was shocking,” Vickrey said. “I’ve never seen one like this.”

Vickrey said the public was not notified of the meeting, there were more than 30 people in attendance packed into a small conference room and Blackmore did not recuse himself from starting and overseeing the meeting even though he was also a candidate.

Vickrey said when he first decided to resign, there was only one candidate for the House District 6 seat, and he wanted that person to be appointed to fill the remainder of his term so they could retain his seniority.

When it became clear there would be two candidates, Vickrey said he still thought a public special convention would be a good opportunity to hear from both candidates, but he was disappointed with the eventual organization of the meeting.

Sen. Molly Baumgardner, a Republican from Louisburg, shared similar concerns and stated that not every precinct committee member received a letter, and the letters that were sent out featured the wrong address for the Paola chamber office.

She also said the small conference room not only raised COVID-19 concerns, but it also made it nearly impossible to keep it a secret ballot.

Miami County Attorney Elizabeth Sweeney-Reeder said she was one of the precinct members who did not initially receive a letter in the mail, and when she made a post on the Miami County GOP Page on Facebook asking for the date and location, she later received a private message from the group with the details stating that they first wanted to verify she was a precinct member before releasing the information.

Sweeney-Reeder said she realizes the event does not fall under the guidelines of the Kansas Open Meetings Act, but she still thinks it should have been more public to help shed light on the importance of the role of a precinct committee member.

“I think the public should have been notified,” she said.

Sweeney-Reeder voiced her concerns at the start of the meeting and later made a motion to amend the rules of the special convention to allow for debate and questions of the candidates, which did take place.

Her biggest complaint, though, was not getting answers ahead of time to her questions regarding why the convention was held in the middle of the day in a small area and without public notifications.

“I had questions as a precinct member, and they were not answered,” Sweeney-Reeder said.

Blackmore said he didn’t realize Vickrey had resigned until he got a letter from the Secretary of State’s office at the beginning of July, and he immediately began working to set up the special convention, as is his requirement as Miami County GOP chair.

Although he did open the meeting, Blackmore said he turned it over to Dana Webber, Osage County Republican Central Committee chair, who handled the voting portion.

Blackmore said Kansas GOP 2nd District Chair Cheryl Reynolds could not attend the meeting, so she lined up Webber to attend.

Reynolds confirmed that and said state statute states that the county chair is supposed to mail notice of the meeting to precinct members and open the meeting, which Blackmore did.

“I believe it was a fair situation,” she said.

Miami County Commissioner Phil Dixon said he thinks both candidates did a great job during the question-and-answer portion of the meeting, and although he can understand why some may have been upset by the size of the room, he thinks Blackmore did a good job overall organizing the event.

“It probably wasn’t perfect, but it was fine,” Dixon said.

“I think it was run in a correct manner,” Pretz said.

Poetter said she knew going into the convention that she would probably lose to Blackmore because he was the county chair and had appointed several of the precinct committee members.

Still, she did not believe the organization and operation of the meeting was up to the standards of previous conventions, such as the one held in 2016 at the Paola Community Center during which Jennie Fyock was selected to replace Gayla Shields as county treasurer after Shields resigned.

Blackmore said the Miami County Republican Central Committee does not have very much money, and it cost $75 just to rent out the chamber meeting room.

He pointed out, though, that masks, hand sanitizer and a new pen were provided to everyone.

He also apologized for the address mistake on the letters, but he added that the letters referenced the statutes regarding the rules for a special convention, and a rules committee made sure that all appropriate procedures were followed.

He also said 27 of the 28 voting precinct committee members showed up for the meeting, including proxy votes. 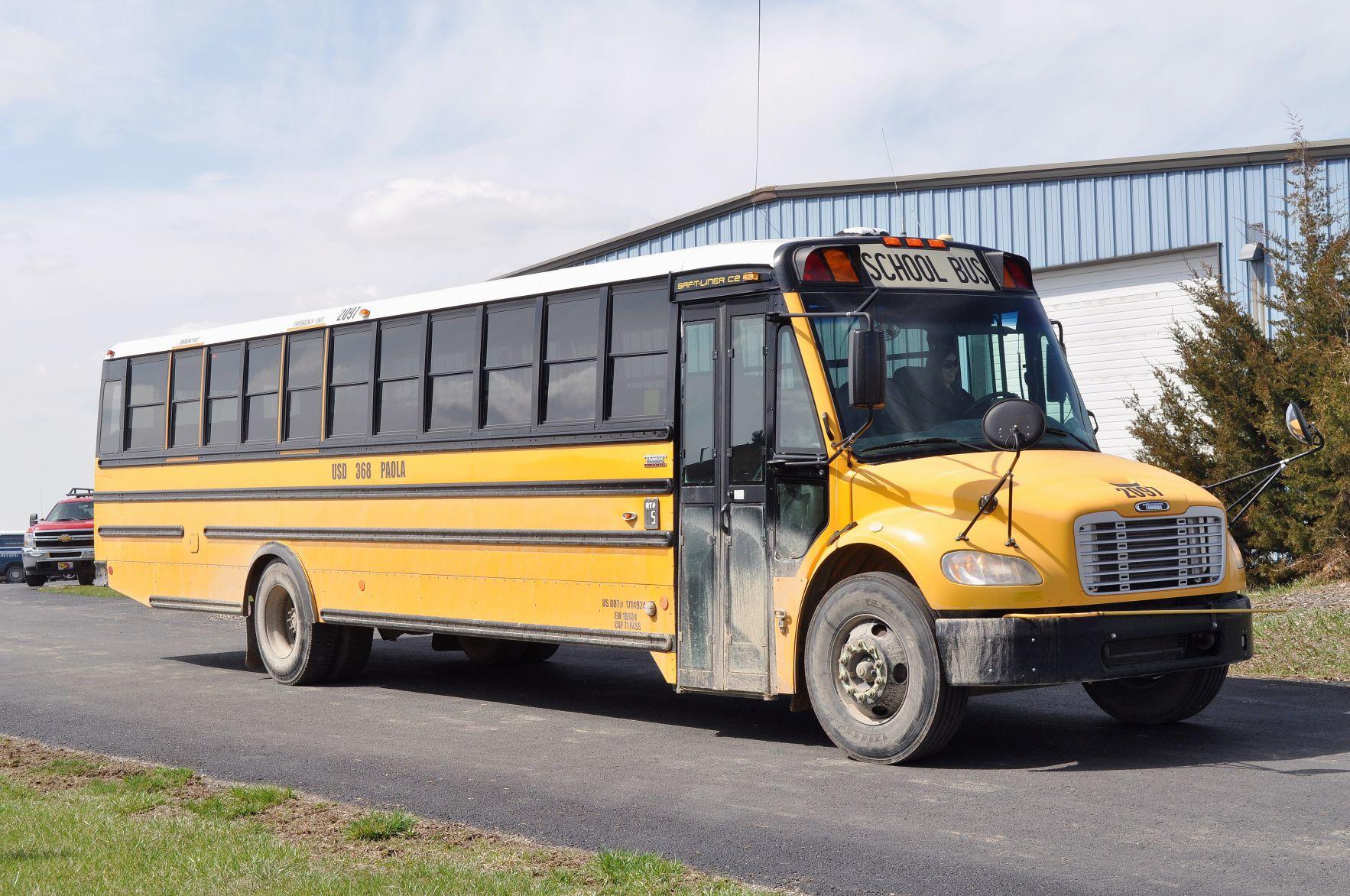 Paola school board members approved a plan Monday, July 27, that will start the school year on Wednesday, Aug. 19.

Samantha Poetter and Clifford Blackmore, both Paola Republicans, will meet in the primary for the House District 6 race to fill the seat being vacated by Rep. Jene Vickrey, who chose not to run for reelection. The Louisburg Republican served 28 years in the House.

Incumbent Janet White, a Beagle Republican, will face challenger Matthew Mercer, a Republican from Louisburg, for the County Clerk’s office.

With those three contested Republican races, as well as Louisburg and Prairie View school bond election questions, on the Aug. 4 ballot, White said she is expecting a larger turnout than normal for the primary. Polls will be open from 7 a.m. to 7 p.m. that day.

Advance voting for the Aug. 4 primary is taking place at the former Miami County Sheriff’s Office, located at 118 S. Pearl St. in Paola. The deadline to request a mail ballot has already passed, but advance voting in person is still available.

The former sheriff’s office was selected — instead of the usual site across the street at the Miami County Administration Building — to help mitigate the COVID-19 risk, said White who is also the county’s Election Officer. The new voting site was prepped with safety measures and social distancing protocols as the clerk’s office and its volunteer poll workers prepare to handle what could be a record number of voters for an August primary.

The clerk’s office is offering additional hours and extending hours in an effort to minimize the need for lines at the polling site to also help mitigate the COVID-19 risk, White said.

The location also will remain open after business hours until 7 p.m. on Thursday, July 30. Advance voting will be available the day before the primary from 8 a.m. to noon Monday, Aug. 3. 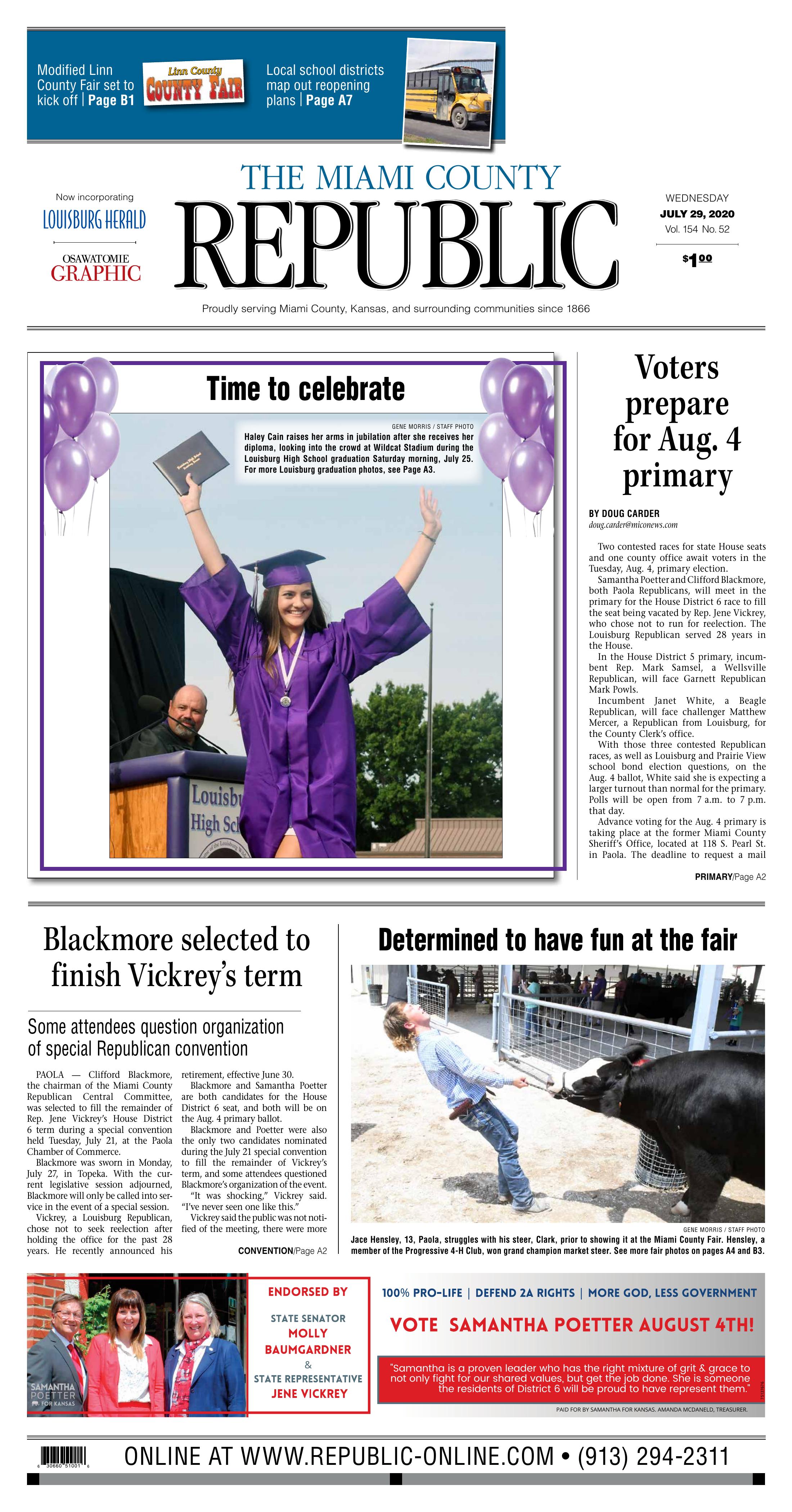