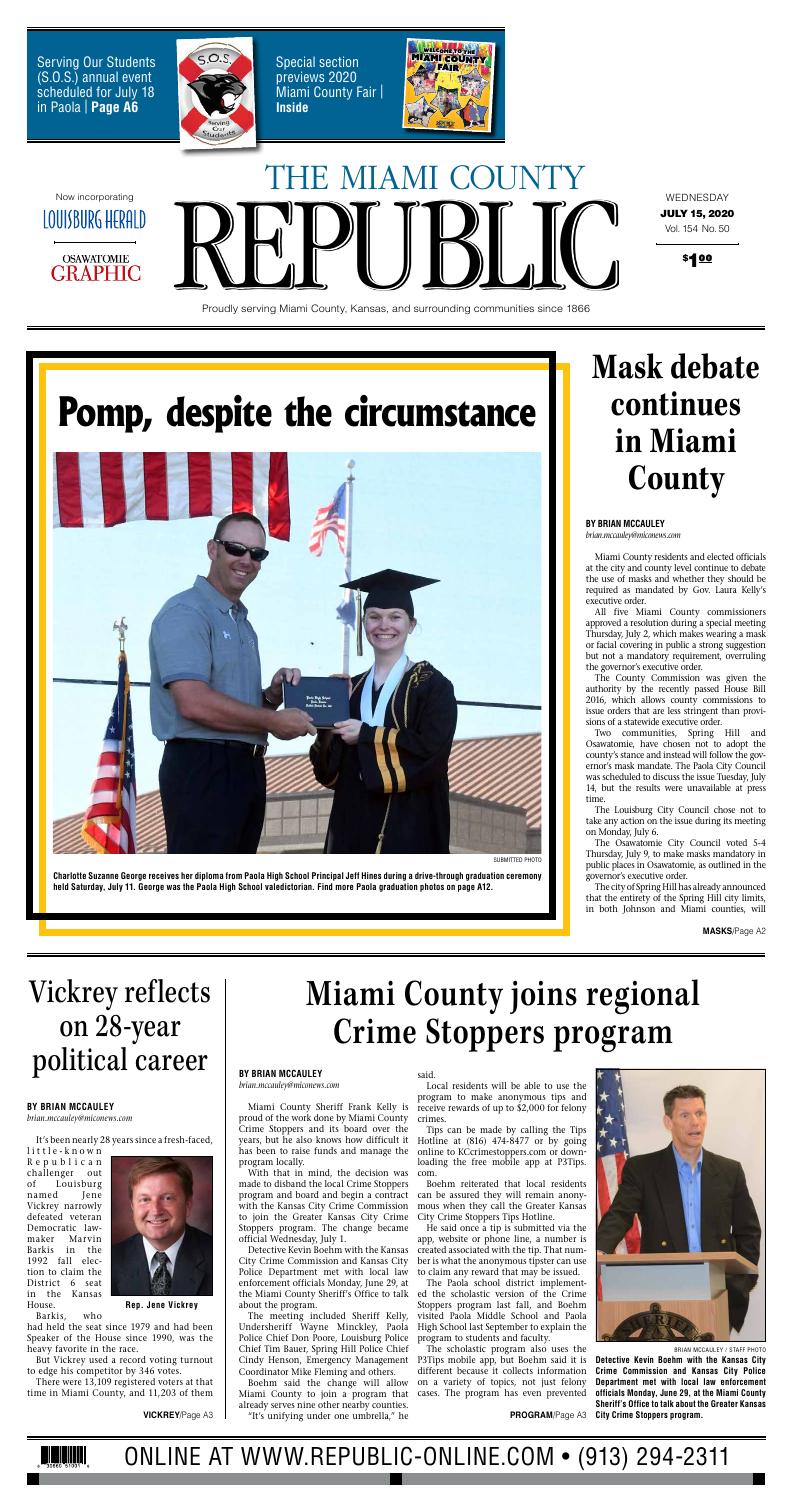 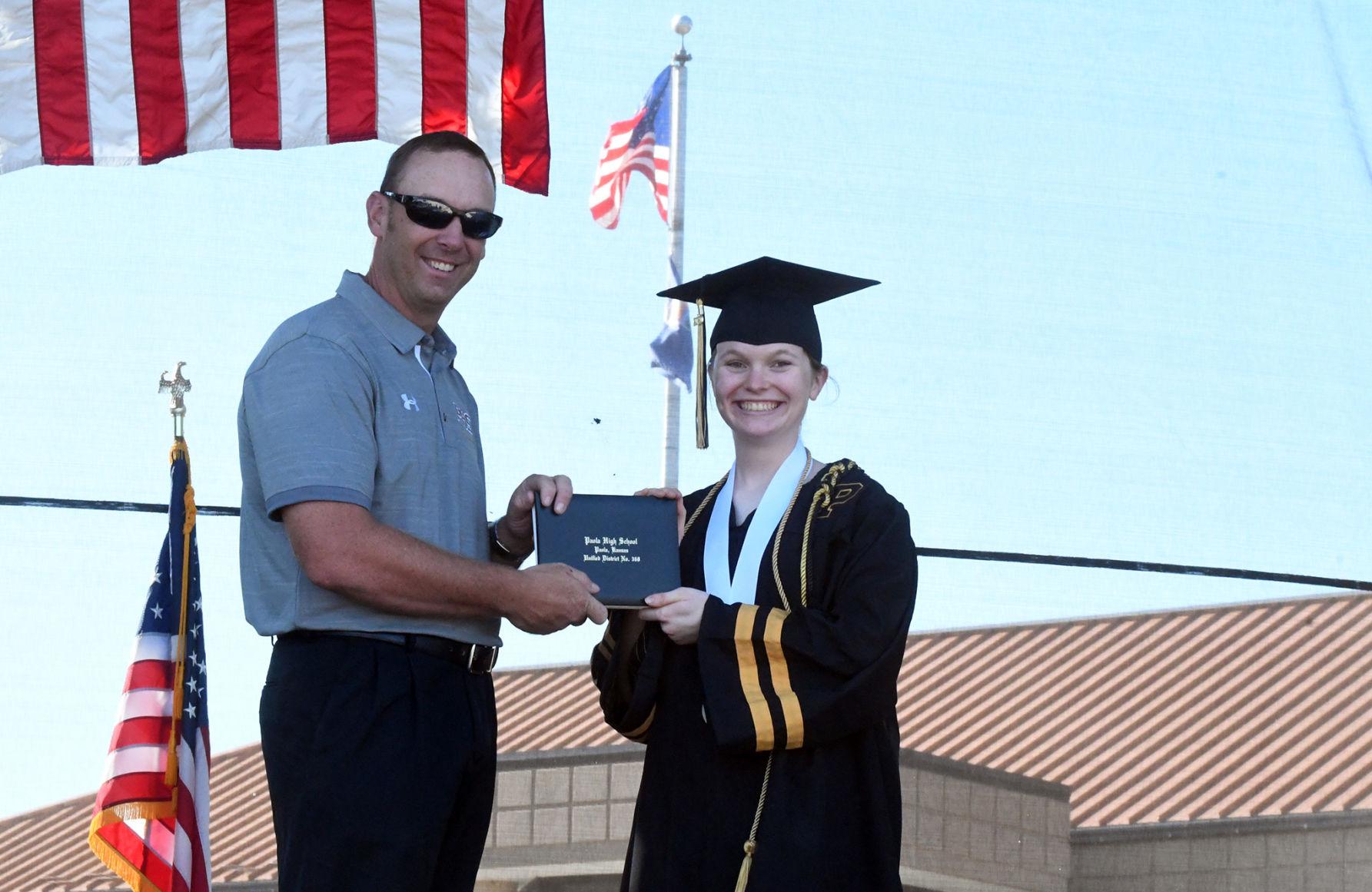 Pomp, despite the circumstance

Miami County Sheriff Frank Kelly is proud of the work done by Miami County Crime Stoppers and its board over the years, but he also knows how difficult it has been to raise funds and manage the program locally.

Boehm said the change will allow Miami County to join a program that already serves nine other nearby counties.

“It’s unifying under one umbrella,” he said.

Local residents will be able to use the program to make anonymous tips and receive rewards of up to $2,000 for felony crimes.

Tips can be made by calling the Tips Hotline at (816) 474-8477 or by going online to KCcrimestoppers.com or downloading the free mobile app at P3Tips.com.

Boehm reiterated that local residents can be assured they will remain anonymous when they call the Greater Kansas City Crime Stoppers Tips Hotline.

He said once a tip is submitted via the app, website or phone line, a number is created associated with the tip. That number is what the anonymous tipster can use to claim any reward that may be issued.

The scholastic program also uses the P3Tips mobile app, but Boehm said it is different because it collects information on a variety of topics, not just felony cases. The program has even prevented students from committing suicide, he said.

Since the scholastic program has been implemented, Boehm said about 40 anonymous tips have been collected from the schools and passed on to the Paola Police Department and school administration in real time.

Poore said he is very pleased with how the program has worked out so far. 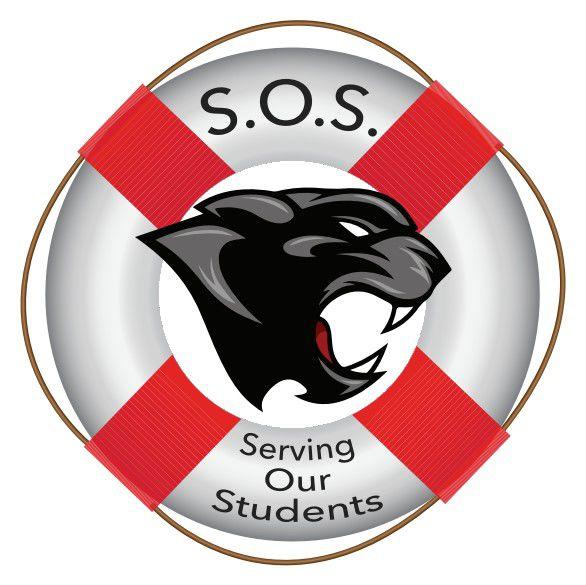 It’s been nearly 28 years since a fresh-faced, little-known Republican challenger out of Louisburg named Jene Vickrey narrowly defeated veteran Democratic lawmaker Marvin Barkis in the 1992 fall election to claim the District 6 seat in the Kansas House.

Barkis, who had held the seat since 1979 and had been Speaker of the House since 1990, was the heavy favorite in the race.

But Vickrey used a record voting turnout to edge his competitor by 346 votes.

There were 13,109 registered voters at that time in Miami County, and 11,203 of them voted in the election, putting the turnout at more than 85 percent.

Vickrey pushed hard for residents to register to vote during his campaign, and he even reportedly turned in more than 700 voter registration applications to the clerk’s office himself.

Now, nearly three decades later, Vickrey is ready to step away from the House seat that has only been occupied by two people for the past 41 years.

Vickrey decided not to seek reelection this fall, and Paola Republicans Samantha Poetter and Clifford Blackmore will square off in the primary election Tuesday, Aug. 4.

Early on in his political career, Vickrey said he remembers making a voting mistake and receiving advice from some people telling him he needed to “spin” his response.

Instead, he followed the advice he received from veteran lawmaker and Rooks County Republican Gayle Mollenkamp shortly after he took office: “Always tell the truth, even when it hurts.”

“People are hungry for the truth, and that’s what they deserve,” Vickrey said.

Looking back on his career, Vickrey said he is most proud of the fact that he had a 100 percent voting record except for three occasions — his mother’s funeral, his father-in-law’s funeral and his daughter’s graduation.

“I take the job very seriously,” Vickrey said during an interview on the House floor just before he made his retirement speech. “It’s such an honor to have this job.”

Throughout his political career, Vickrey has also operated his own business called Jene Vickrey Floor Coverings. He remembers once advertising that he’s honored to work on the House floor and on your house floor.

Even though he’s stepping away from Topeka, Vickrey said he still plans to operate his flooring business. He’s also looking forward to being home with his wife Teresa during the winter season for the first time in a long time, and spending more time with his five granddaughters, all who live close to Louisburg.

Miami County residents and elected officials at the city and county level continue to debate the use of masks and whether they should be required as mandated by Gov. Laura Kelly’s executive order.

All five Miami County commissioners approved a resolution during a special meeting Thursday, July 2, which makes wearing a mask or facial covering in public a strong suggestion but not a mandatory requirement, overruling the governor’s executive order.

The County Commission was given the authority by the recently passed House Bill 2016, which allows county commissions to issue orders that are less stringent than provisions of a statewide executive order.

Two communities, Spring Hill and Osawatomie, have chosen not to adopt the county’s stance and instead will follow the governor’s mask mandate. The Paola City Council was scheduled to discuss the issue Tuesday, July 14, but the results were unavailable at press time.

The Louisburg City Council chose not to take any action on the issue during its meeting on Monday, July 6.

The Osawatomie City Council voted 5-4 Thursday, July 9, to make masks mandatory in public places in Osawatomie, as outlined in the governor’s executive order.

The city of Spring Hill has already announced that the entirety of the Spring Hill city limits, in both Johnson and Miami counties, will be under the mask mandate, according to Spring Hill’s City Emergency Operations Plan.

Osawatomie City Council members had met during a special meeting Friday, July 3, to discuss Gov. Kelly’s executive order and the Miami County Commission’s resolution related to masks, but the discussion was continued until their meeting Thursday, July 9. Until then, the Osawatomie City Council directed the city manager to continue following the governor’s executive order and encouraged members of the public to speak at the July 9 meeting.

“My only concern is the health and welfare of this community — my hometown,” Govea said. “My concern is the spreading of this virus. I hate that it has become political and so emotional.”

Govea said a mask has shown to help minimize the spread.

“I wear a mask in public because I don’t want to be the one to share the virus with my family or my community,” Govea said. “I would like to think that at least 75 to 80 percent of the public would follow the ruling of wearing a mask if it were a law, not just because they might get caught, but because they don’t want to take a chance of sharing the virus.”

A handful of people spoke during the public comment portion of the County Commission meeting before the vote took place.

“I’ve seen so much misinformation on Facebook,” Smail said, adding that he thinks the mask mandate is the right move for the economy and residents.

Josh Barnett said he doesn’t believe masks should be mandatory, and he mentioned that he has a family member with asthma who wouldn’t be able to wear one.

Lorranda Baldridge also spoke out against the mask mandate.

“I, personally, would like to have the right to choose for ourselves,” she said, adding that she doesn’t believe it would be enforceable.

Michelle Kaiser, who owns Town Square Event Design in Paola, said the mask mandate would cripple her already struggling business because clients have told her they will postpone events if guests are required to wear a mask.

Each commissioner also spoke before they voted, explaining that a majority of the constituents they have heard from have asked them to overrule the mandate and not make masks a requirement.

Commissioner Tyler Vaughan said his decision is not a political one, he just doesn’t believe in additional government control and he doesn’t think the mandate would be enforceable.

“I will adamantly stand against government oversight,” Vaughan said. “I’m not going to be a part of telling you what to do.”

Commissioner George Pretz said he wants Miami County residents and business owners to be able to make their own decisions.

“We want you to guide yourself and your family,” he said.

Commissioner Rob Roberts said he believes residents will be able to make the best decisions for them and their families without government taking away their rights. He added, though, that he understands the seriousness of the virus, especially after recently losing a friend to COVID-19.

“Please, if you are sick, stay away from other people,” Roberts said.

The commissioners also clarified that individual cities, school districts and businesses in Miami County may choose to set their own mask requirements.

Kelly said in issuing the mask mandate that until a vaccine is available, residents can protect themselves by practicing social distancing, staying home when they are sick and wearing a mask.

“If we want a healthy Kansas economy, we need healthy businesses and healthy Kansans,” she said. “COVID-19 is still in our communities, and it is still spreading.” 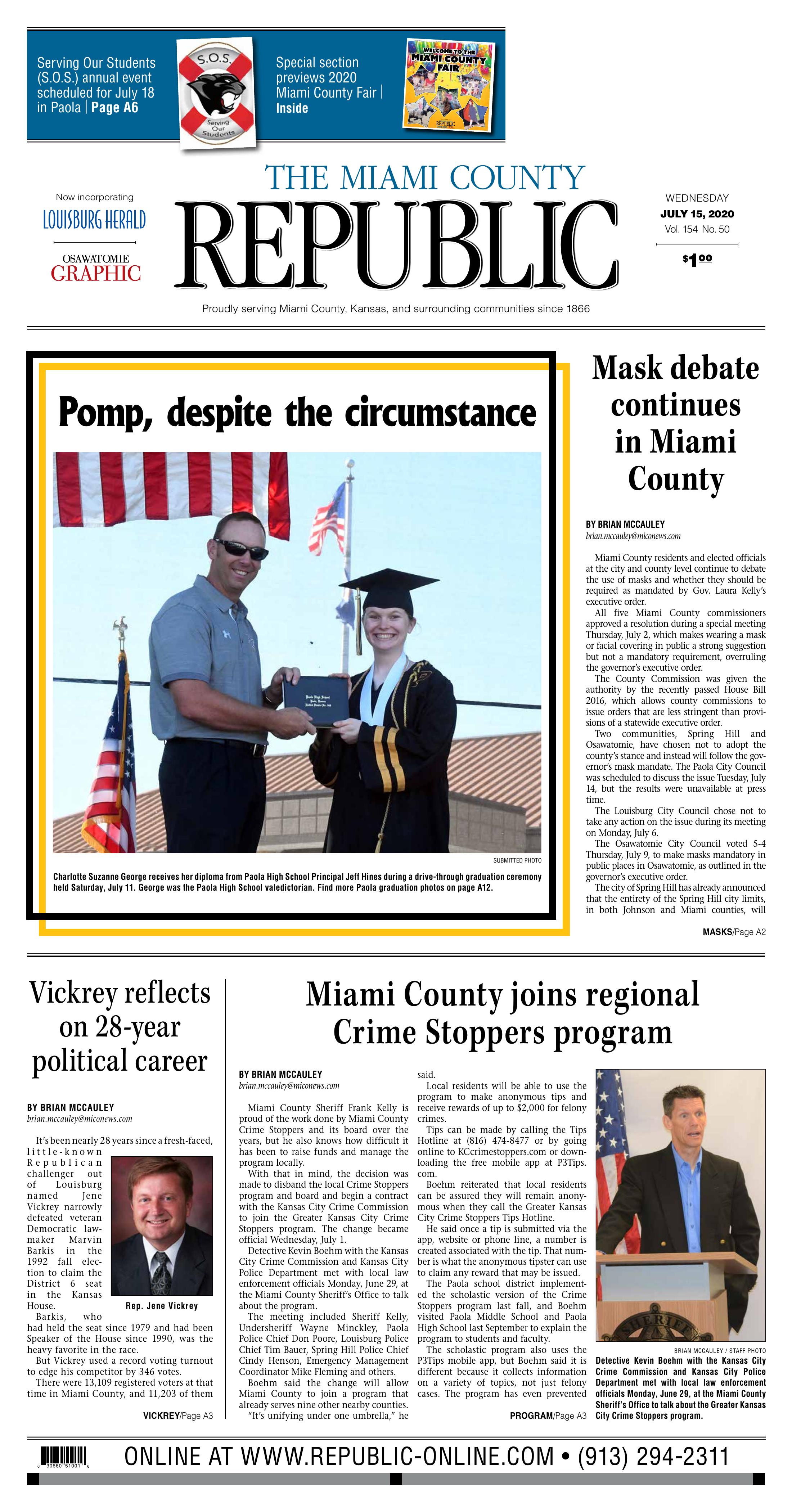