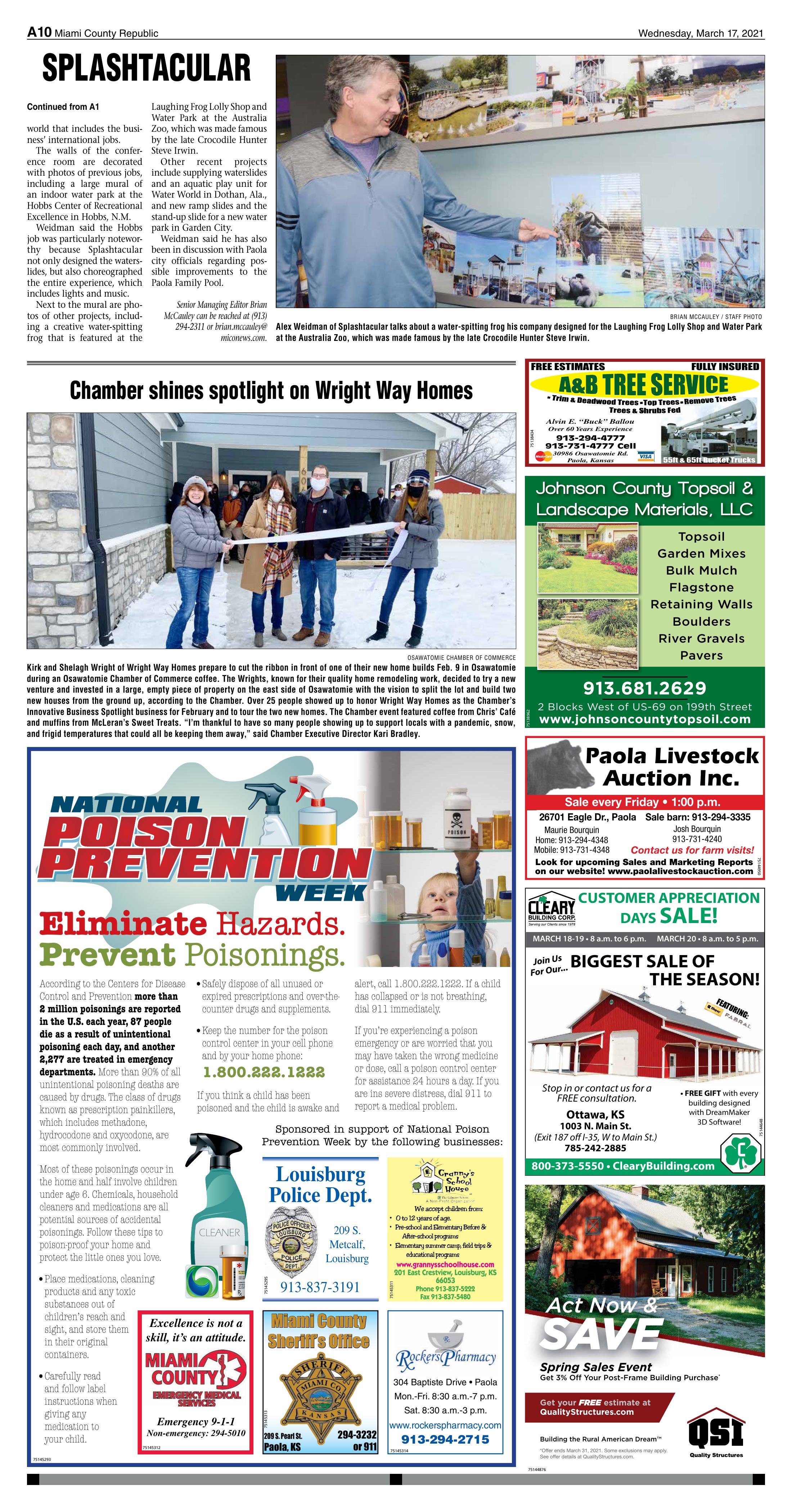 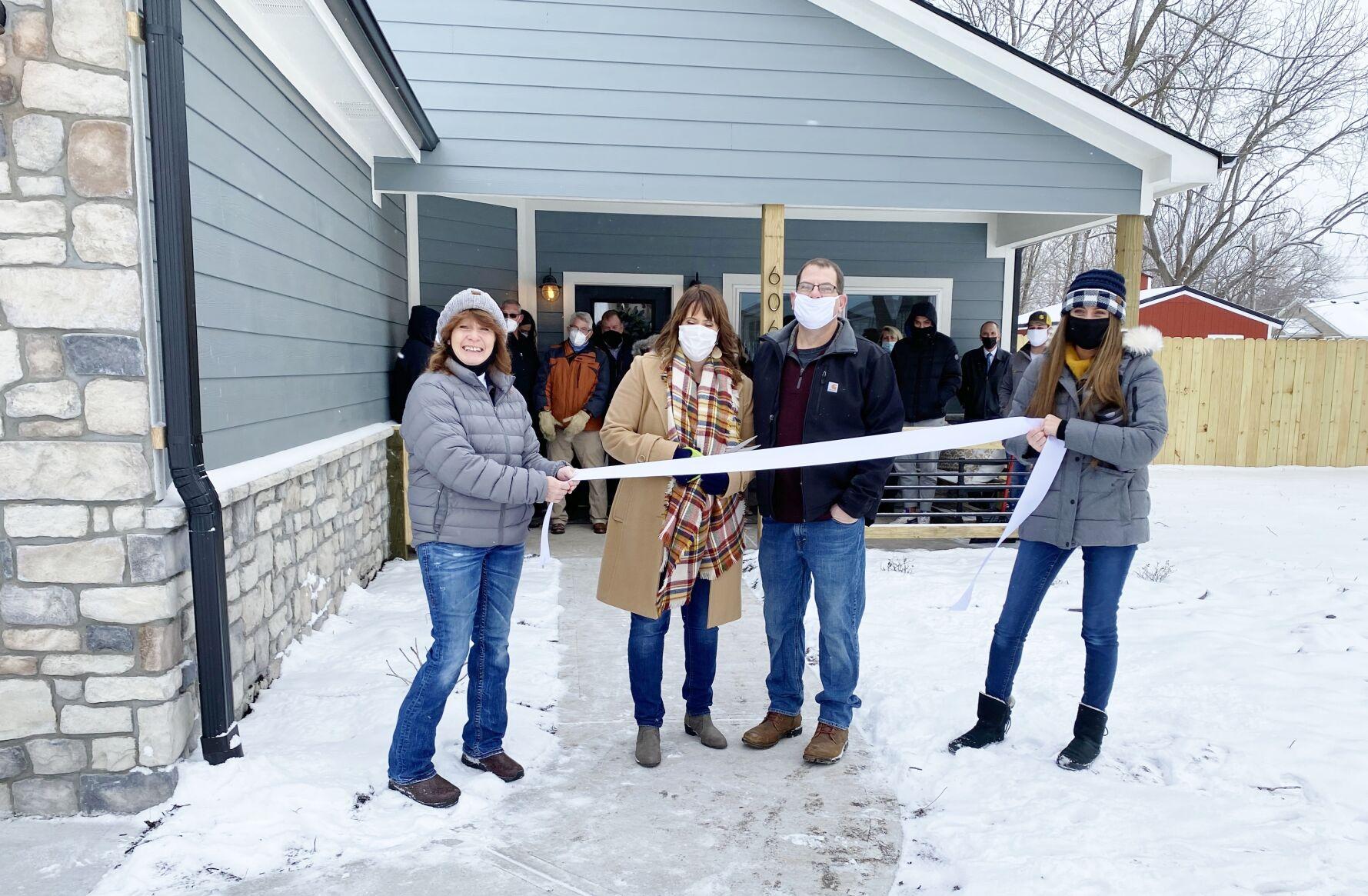 Kirk and Shelagh Wright of Wright Way Homes prepare to cut the ribbon in front of one of their new home builds Feb. 9 in Osawatomie during an Osawatomie Chamber of Commerce coffee. The Wrights, known for their quality home remodeling work, decided to try a new venture and invested in a large, empty piece of property on the east side of Osawatomie with the vision to split the lot and build two new houses from the ground up, according to the Chamber. Over 25 people showed up to honor Wright Way Homes as the Chamber’s Innovative Business Spotlight business for February and to tour the two new homes. The Chamber event featured coffee from Chris’ Café and muffins from McLeran’s Sweet Treats. “I’m thankful to have so many people showing up to support locals with a pandemic, snow, and frigid temperatures that could all be keeping them away,” said Chamber Executive Director Kari Bradley.

Alex Weidman is president of Paola-based Splashtacular, which is the country’s largest waterslide manufacturer.

Alex Weidman of Splashtacular demonstrates how someone would ride the new stand-up waterslide his business is designing for a new water park in Garden City. The waterslide will be the first of its kind in the country.

Alex Weidman of Splashtacular talks about a water-spitting frog his company designed for the Laughing Frog Lolly Shop and Water Park at the Australia Zoo, which was made famous by the late Crocodile Hunter Steve Irwin.

Splashtacular employees (from left) Corey Grace, Josh Foster and Drew Ford braved the cold to test a prototype of a new stand-up water slide in the parking lot of Splashtacular in January.

A map on a wall inside Splashtacular’s Paola headquarters features markings designating everywhere Splashtacular products have been put into service across the country.

PAOLA — It’s not every day you see men in T-shirts and swimming trunks braving the cold during a brisk January day to test out a portion of a water slide in a parking lot.

Then again, there is no offseason when it comes to the business of water park design and engineering.

As COVID-19 numbers continue to decline, water parks across the country are preparing for a busy summer season, and many will be featuring slides, fountains and other amenities designed by Paola-based Splashtacular.

The Paola business is the largest waterslide manufacturer in the United States, and although the recent pandemic hurt business, it didn’t stop the creative staff at Splashtacular from continuing to churn out new ideas and products.

Splashtacular president Alex Weidman said the recent January parking lot test was for a new stand-up water slide that will be the first of its kind in the country. He got the idea while in Europe.

Team members Corey Grace, Josh Foster and Drew Ford braved the cold to test a prototype of the design in January, and photos of their chilly task were turned into a meme that is now proudly displayed on an office wall inside the Splashtacular headquarters at 401 N. East St.

Other walls throughout the building help tell the tale of how Splashtacular has built a world-renowned reputation in the business.

One wall features a map of the United States with markings designating everywhere Splashtacular products have been put into service. Another features a similar map of the world that includes the business’ international jobs.

The walls of the conference room are decorated with photos of previous jobs, including a large mural of an indoor water park at the Hobbs Center of Recreational Excellence in Hobbs, N.M.

Weidman said the Hobbs job was particularly noteworthy because Splashtacular not only designed the waterslides, but also choreographed the entire experience, which includes lights and music.

Next to the mural are photos of other projects, including a creative water-spitting frog that is featured at the Laughing Frog Lolly Shop and Water Park at the Australia Zoo, which was made famous by the late Crocodile Hunter Steve Irwin.

Other recent projects include supplying waterslides and an aquatic play unit for Water World in Dothan, Ala., and new ramp slides and the stand-up slide for a new water park in Garden City.

Weidman said he has also been in discussion with Paola city officials regarding possible improvements to the Paola Family Pool.