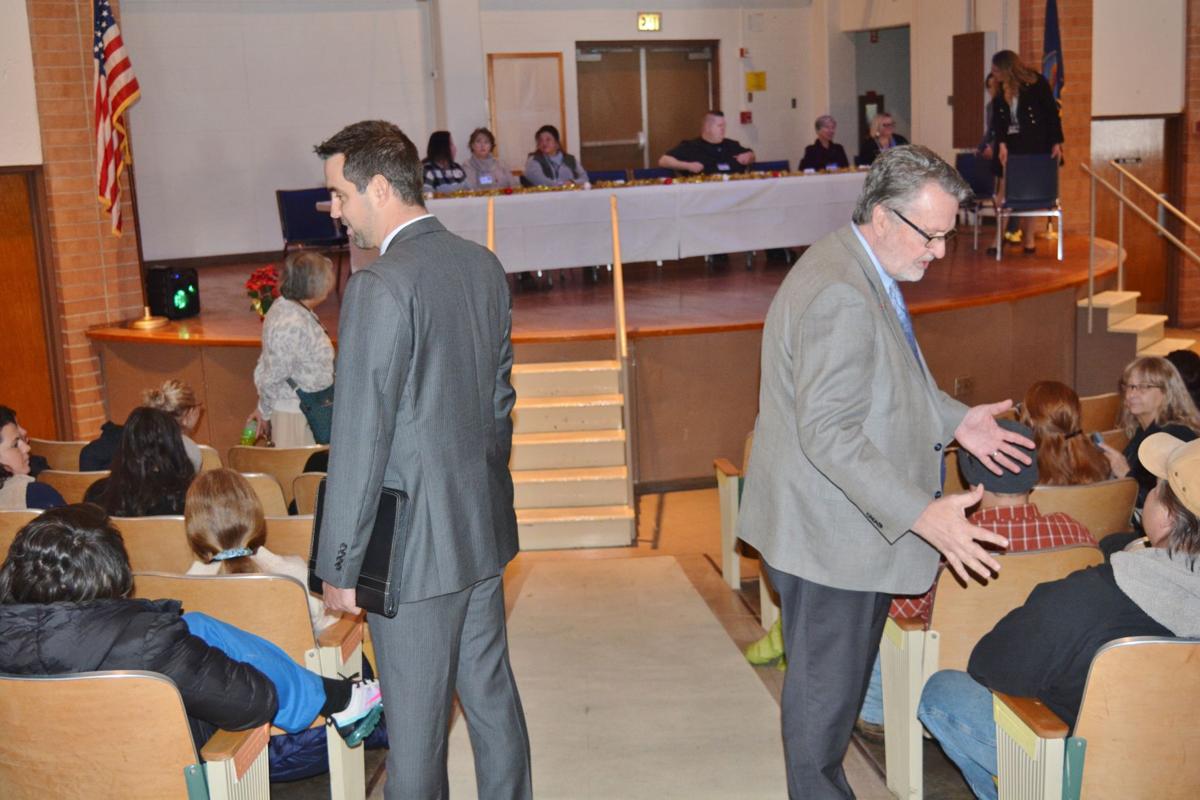 State Rep. Mark Samsel (left) and Lt. Gov. Lynn Rogers speak with Osawatomie State Hospital employees on Tuesday, Dec. 17, before the start of an informational meeting in the auditorium. 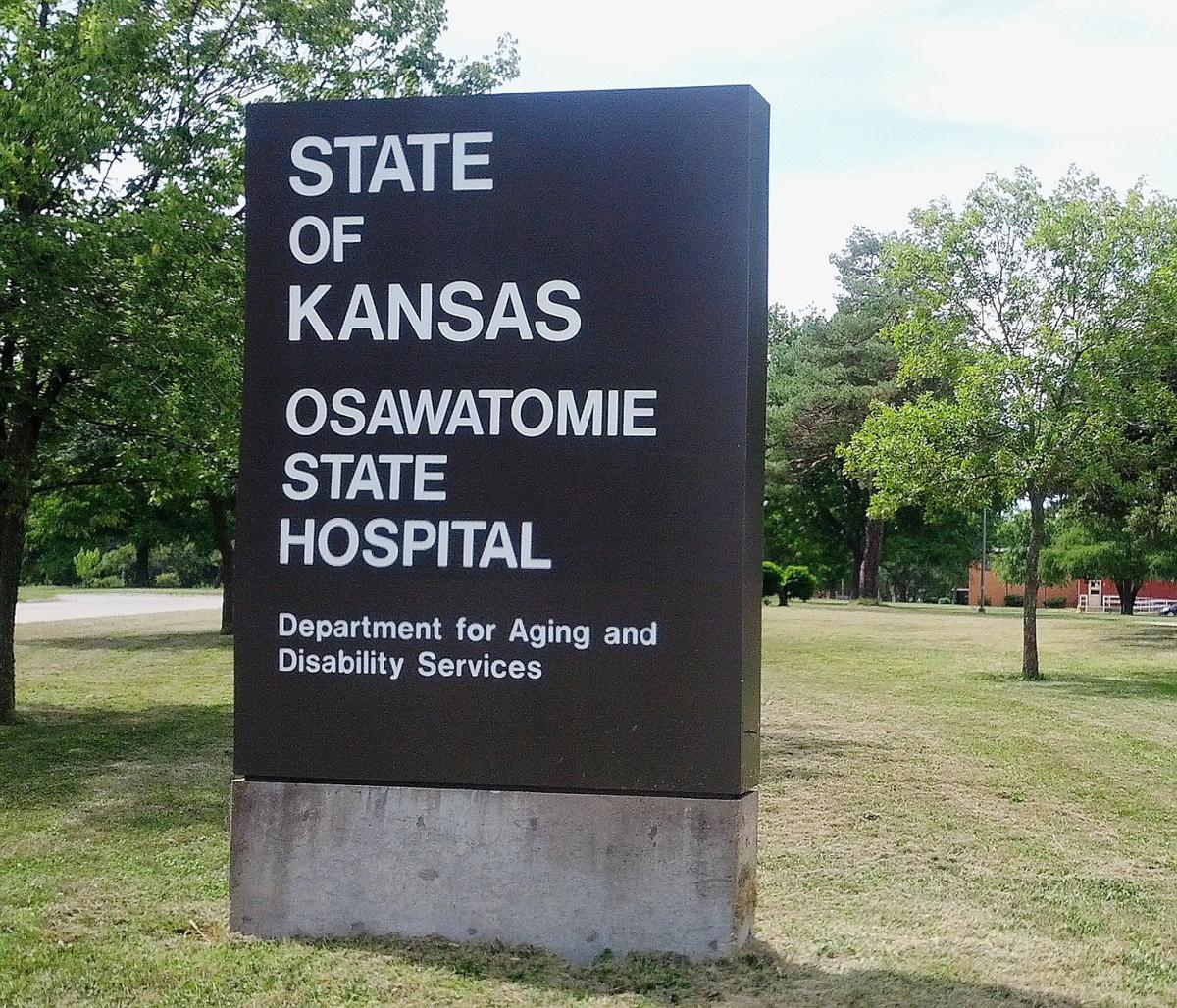 State Rep. Mark Samsel (left) and Lt. Gov. Lynn Rogers speak with Osawatomie State Hospital employees on Tuesday, Dec. 17, before the start of an informational meeting in the auditorium.

OSAWATOMIE — Lt. Gov. Lynn Rogers and state Rep. Mark Samsel visited Osawatomie State Hospital on Tuesday, Dec. 17, hoping to learn more about the mental health facility. By the time they left, they had compiled a full slate of issues that could be tackled during the upcoming legislative session.

Several of the state hospital’s employees attended an informational meeting in the auditorium, and Rogers and Samsel were given seats of honor on the stage next to a panel of OSH representatives, along with Osawatomie Mayor Mark Govea.

Govea said he’d like to see a growing partnership between the city of Osawatomie and the state hospital, with the city perhaps one day providing power and other utilities to the campus.

Samsel, a Wellsville Republican, said the state hospital needs to be a priority in Topeka.

“It’s hugely critical, and I’m happy to support it and get it back moving in the right direction,” Samsel said.

Rogers, a Wichita Democrat, admitted that mental health is somewhat of new territory for him as he previously worked as an agricultural banker, but he said he is eager to learn about the issues and bring them back to Gov. Laura Kelly.

“Rebuilding the state is what we’ve been tasked with,” Rogers said. “We want to make sure every Kansan is healthy.”

Feeback said several of the issues they are experiencing are related to discharge planning, and she asked York to elaborate from the perspective of a social worker.

York said one of the issues is that Medicaid is shut off for patients while they are at the state hospital, which usually results in them staying longer than necessary while they wait for the Medicaid submission application to be processed upon release. She suggested allowing Medicaid to be paused for patients and not completely shut off.

She also said housing resources are limited for patients who aren’t necessarily a fit for the state hospital but don’t have any other option. She mentioned a need for group homes or other intermediary housing.

At the state hospital campus, York said programs focused on teaching patients independent living skills such as cooking and how to manage time, money and medications would go a long way toward helping get patients discharged without returning.

“A transitional program, even if housed on campus, would be beneficial,” York said.

Gustillo said many of the patients at the state hospital are dealing with substance abuse and medical problems in addition to psychiatric issues.

The hospital, though, no longer has a substance abuse program, and Gustillo said it can be hard for many of the patients to find a program once they are released.

The cost of medication also makes it difficult to treat psychiatric issues, she said.

“One patient recently said marijuana is much cheaper than the prescribed drug,” Gustillo said. “That is a big problem.”

Another state hospital employee spoke from the audience and reiterated that drugs are a big issue with patients.

“Kansas has an epidemic, and it’s meth, not opioids,” she said.

Another employee urged the state officials to implement drug prevention programs at the high school level, including information about how dangerous the drugs are.

“These kids don’t know how much research is out there,” she said. “We have to start talking to kids about it.”

Rogers asked for the state hospital to provide the Legislature with statistics regarding the drug issue so that better decisions can be made at the state level.

Osawatomie Police Chief David Stuteville attended the informational session at the state hospital, and he brought up an ongoing concern that has become an issue at police departments across the county.

Stuteville said officers may pick up a person on the street who appears to be a threat to themselves or others but hasn’t yet committed a crime. That person will be held at the police station until a bed opens up at the state hospital, but Stuteville said that can take days, and it is a strain on the resources of local police departments.

“It’s not only a dangerous situation for officers but also the patient,” Stuteville said. “It’s not fair to these folks to sit on a booking bench for four days while waiting for a bed. It’s a huge liability.”

Stuteville said he realized, though, that it is a difficult situation without an easy answer. He suggested perhaps setting aside a certain number of beds for law enforcement.

“Truthfully, I don’t know the answer,” he said.

Rogers sympathized with the situation.

“It is a really tough position to be in,” he said. “It’s definitely something we need to work on.”

A couple of nurses at the state hospital raised concerns during the meeting about state statutes that prevent them from putting their hands on a patient that is out of control.

The nurse said the statute, as it currently is written, includes situations involving a patient that is incontinent and may need assistance getting into a shower, or even someone who has an irrational fear of getting into the shower.

“Our society expects nurses to provide that care,” one nurse said. “We need to fix that statute.”

Rogers said he will work to look up that specific statute and research the situation.

Another nurse said state statutes also do not allow them to force medications on patients. She used an example of an insulin-dependent diabetic who suddenly decides they don’t want to take their medication.

“We can’t say anything unless they have a guardian,” she said. “We are powerless.”

State Sen. Caryn Tyson, a Republican from Parker, made a surprise appearance toward the end of the panel discussion when she asked from the audience when the moratorium on admissions will be lifted.

“We have to get more beds in Kansas,” she said.

The state hospital is licensed to house about 200 patients, but Feeback said staffing and other issues began to come to the foreground about five years ago when the census at the hospital reached about 260 patients.

Also, in 2015, a 42-year-old male patient was accused of raping a 21-year-old female employee at the state hospital.

The Kansas Department for Aging and Disability Services suspended voluntary admissions and issued a moratorium that has limited admissions to less than 170 since 2015.

The issues caused the hospital to lose Medicaid certification in January 2016, a move that resulted in the loss of about $1 million a month in federal funds. After the state hospital renovated the 60-bed Adair Acute Care facility, the federal Centers for Medicare and Medicaid Services (CMS) recertified the Adair Acute Care unit in 2017.

Feeback said the rest of the hospital is licensed, but it is not CMS certified. That portion treats patients with private insurance or no insurance.

In 2017, there was some discussion by KDADS officials about privatizing the operation of the hospital and building a new multi-million dollar complex, but the construction cost was estimated to be between $100 and $170 million.

Feeback said she is working to make sure there will be enough staffing if the moratorium is lifted.

“When the moratorium lifts, a projected increase of potentially 40 percent could result as voluntary patients will be considered for admission,” she said.