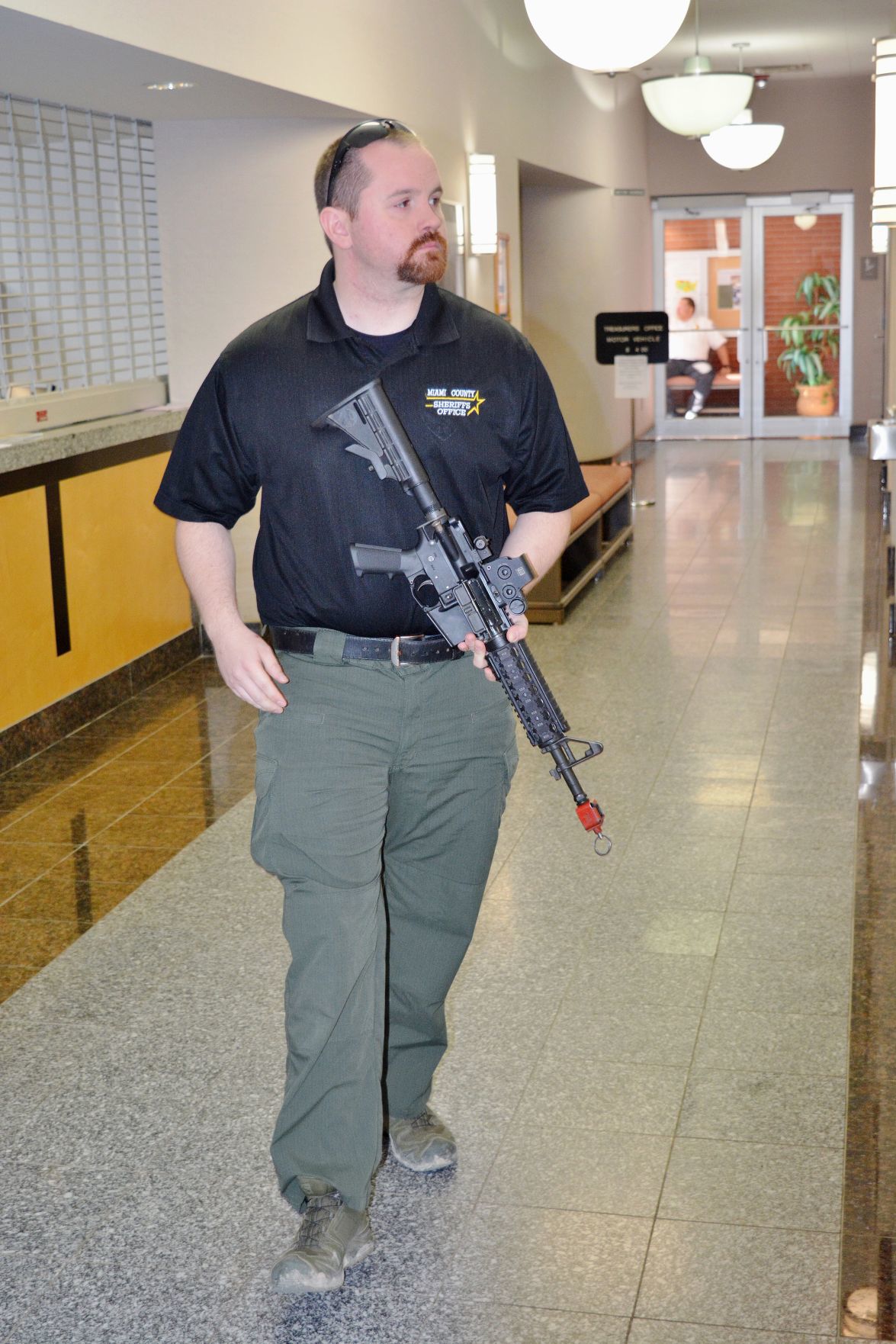 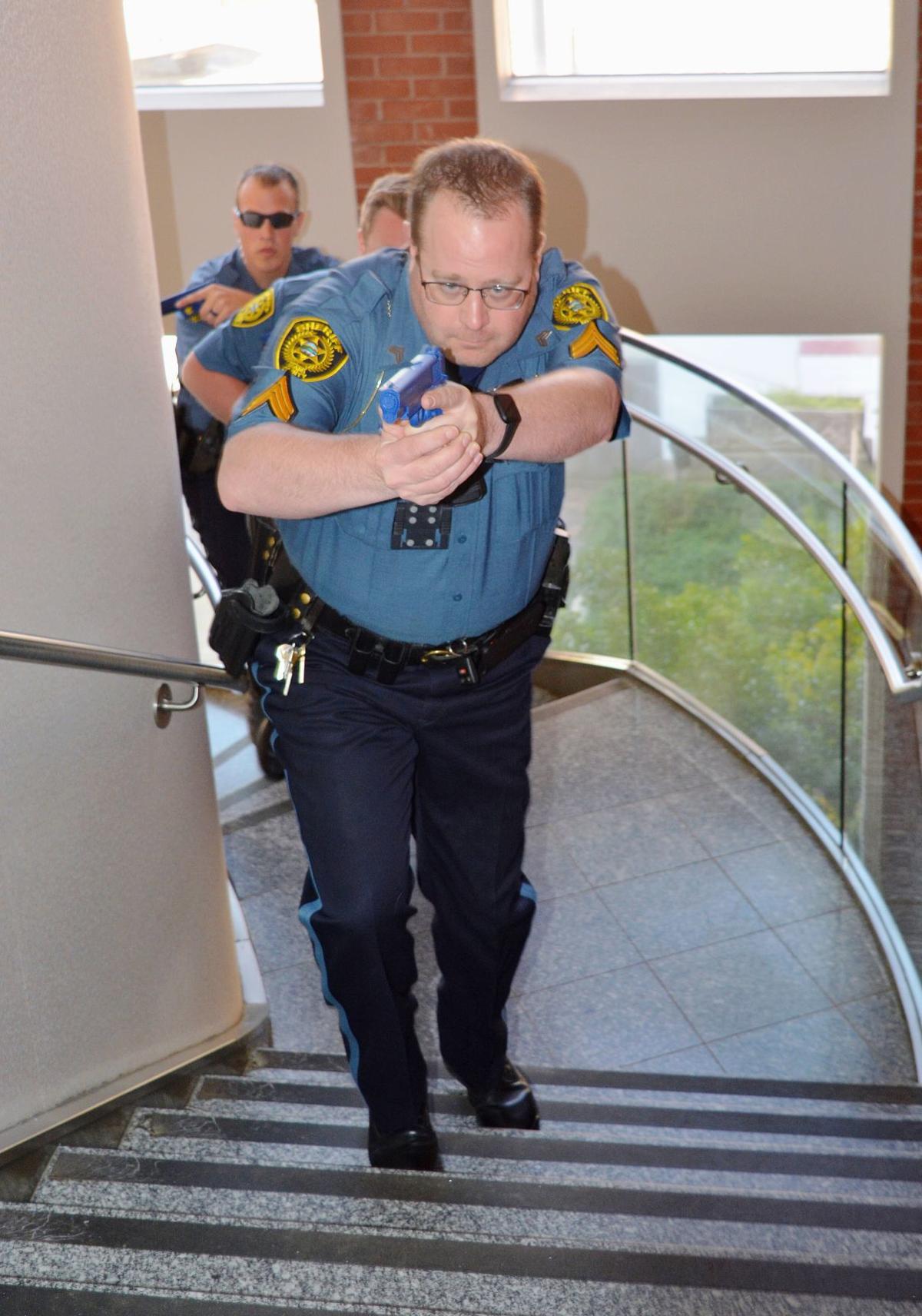 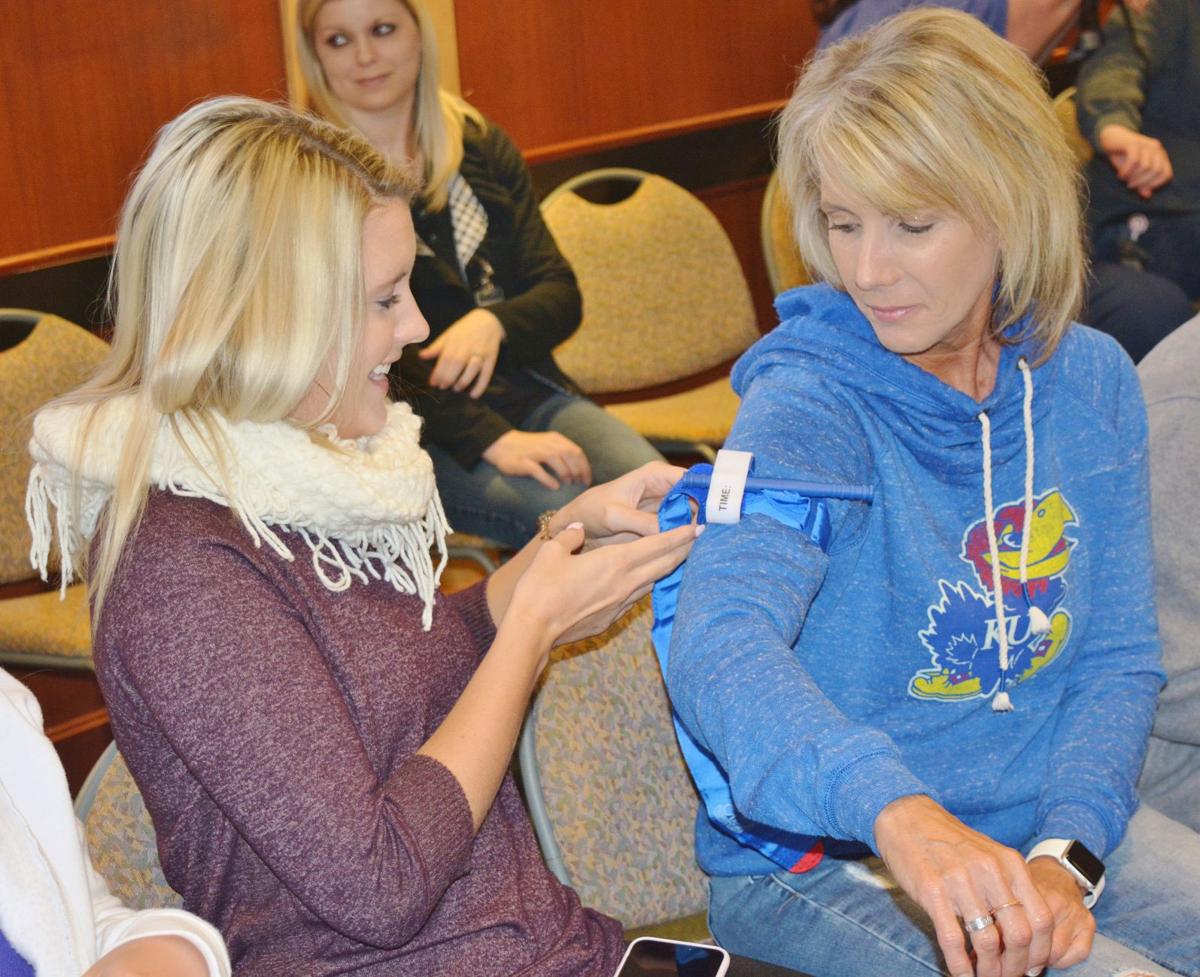 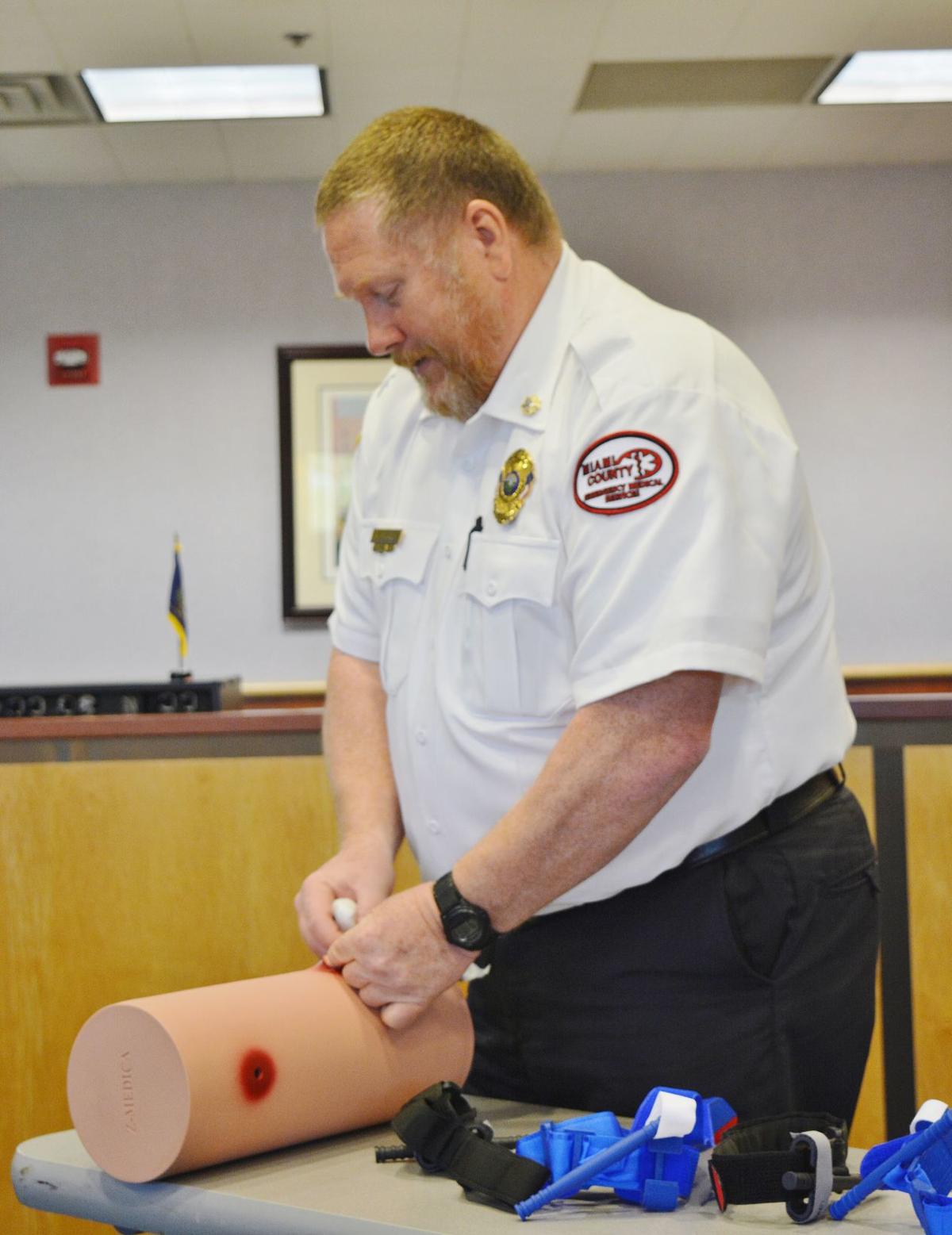 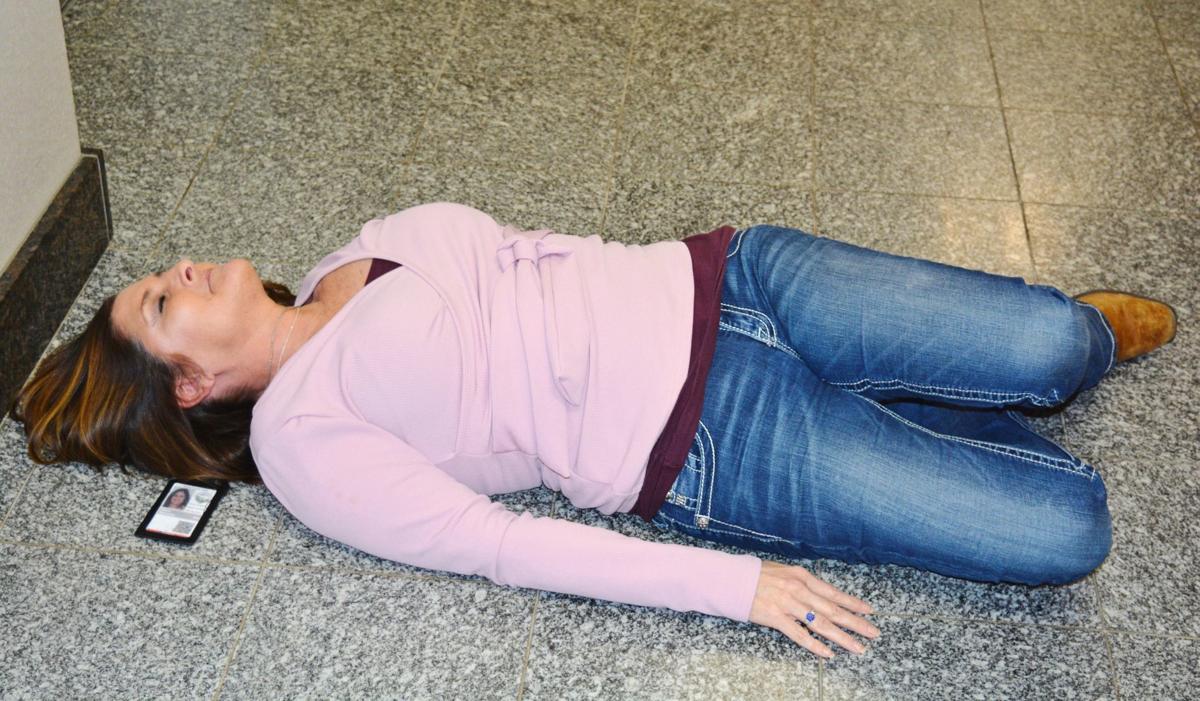 Diana Dusselier plays the role of a shooting victim during an active shooter training session earlier this year at the Miami County Administration Building.

Diana Dusselier plays the role of a shooting victim during an active shooter training session earlier this year at the Miami County Administration Building.

PAOLA — Recent mass shootings in Texas and Ohio have businesses and municipalities across the country reviewing their active shooter protocol.

Miami County government employees went through their own active shooter training earlier this year to better prepare themselves for an emergency situation.

Andrew Roush of the Miami County Sheriff’s Office and former Deputy Steve Lopez took a lead role in instructing the training, with Roush also playing the role of a shooter.

Deputy Chief Frank Burrow of Miami County Emergency Medical Services was also on hand to talk about how to treat the types of injuries that might be incurred during an active shooter situation.

The principles taught during the training were based on A.L.I.C.E., which stands for Alert, Lockdown, Inform, Counter and Evacuate. Lopez said Mike Douglass of the sheriff’s office is the official A.L.I.C.E. instructor, but he was unavailable for the training. Lopez said he was happy to step in and teach the basic guidelines, with an emphasis on “run, hide, fight.”

“If you can get out of the building, by all means, run,” Lopez said. “If you can’t, barricade the room.”

The trainers talked about the importance of acting quickly, as it will take a few minutes for law enforcement personnel to arrive once the shooting is reported.

“The first few minutes, you all are on your own,” Roush said.

Lopez talked about how some strategies have changed over time. He said EMS crews used to not be allowed into an active shooter scene until the suspect is down or in custody, but now law enforcement officers are escorting paramedics into “warm zones” to treat injured people.

Roush reiterated though that neutralizing the shooter has to be the top priority.

“If I’m actively hearing gunshots, I have to run past you,” Roush said.

The commission chambers acted as a triage center in one of the scenarios, and the county employees practiced some of the Stop the Bleed tactics Burrow taught.

Burrow said the guidelines now once again approve the use of tourniquets after a period in which they were no longer recommended. The county employees practiced putting on tourniquets and were told they could use the tool to treat wounds from motor vehicle accidents, work-related injuries and home injuries in addition to wounds from a shooter.

Burrow said another change is how deep wounds are treated. Instead of just applying pressure, as previously instructed, people are now advised to pack the wound with roller gauze.

During the actual shooting scenarios, Roush fired blanks and made sure his weapon was never directly pointed at anyone. The trainers said they don’t want to scare anyone, but they do want everyone to be prepared for an active shooter event.

“Never say never,” Lopez said. “Always have it in the back of your mind when you come to work that today might be the day.”