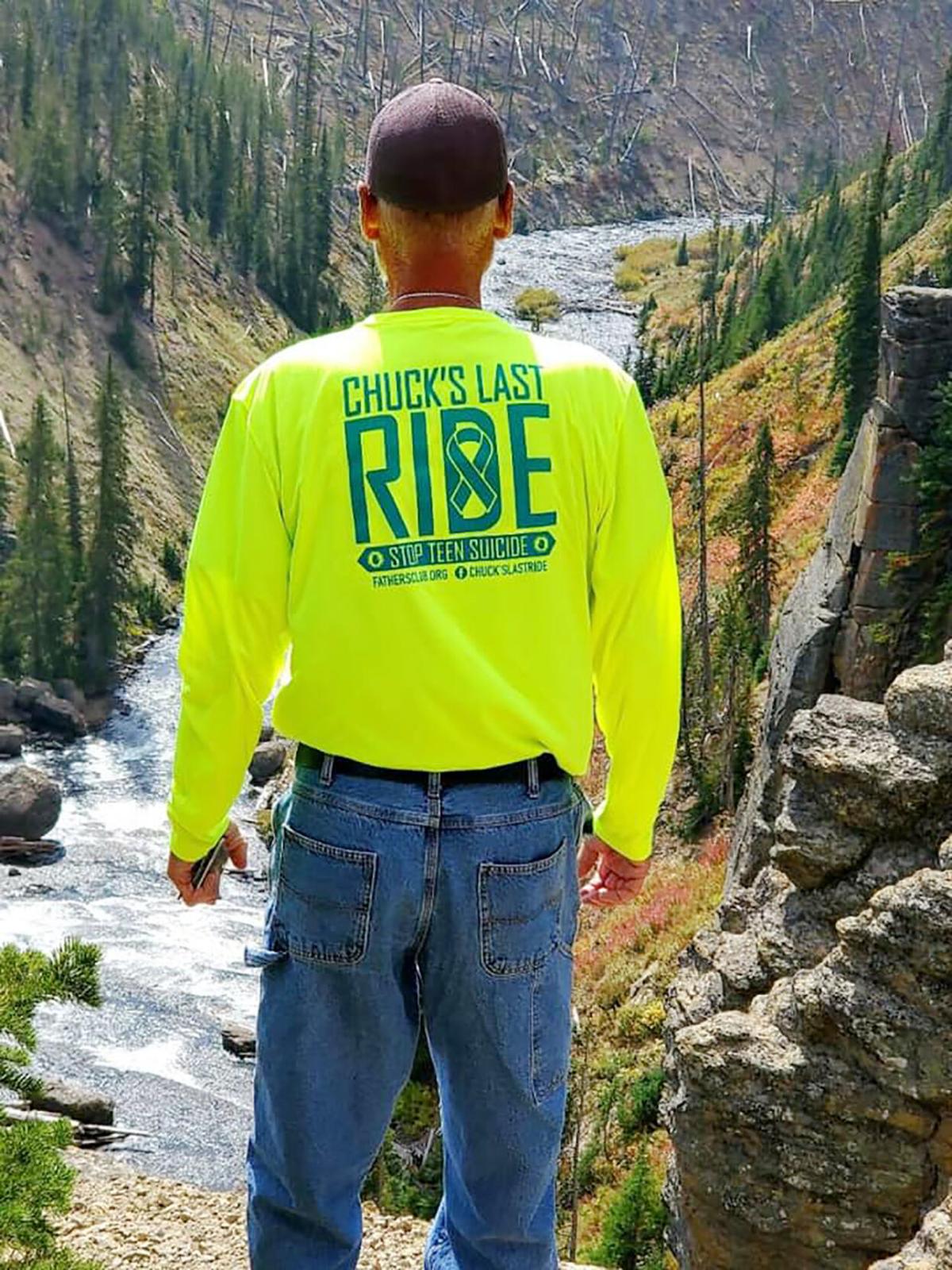 Chuck Smith looks out over the Snake River in Yellowstone National Park during his most recent motorcycle ride to raise funds for teen suicide awareness. 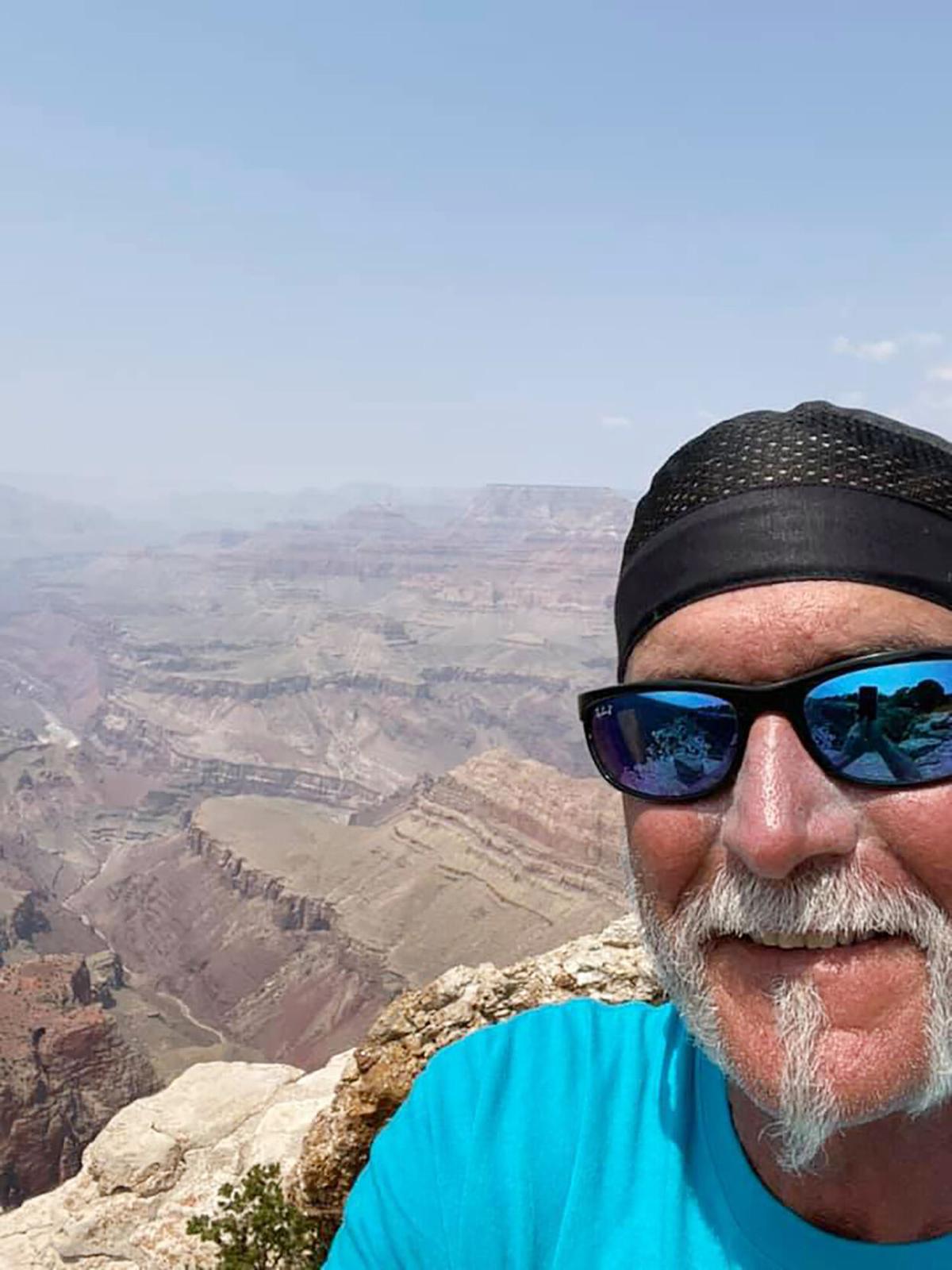 Chuck Smith takes a selfie at the Grand Canyon during his “Chuck’s Last Ride” fundraiser motorcycle ride in August to raise awareness of teen suicide. 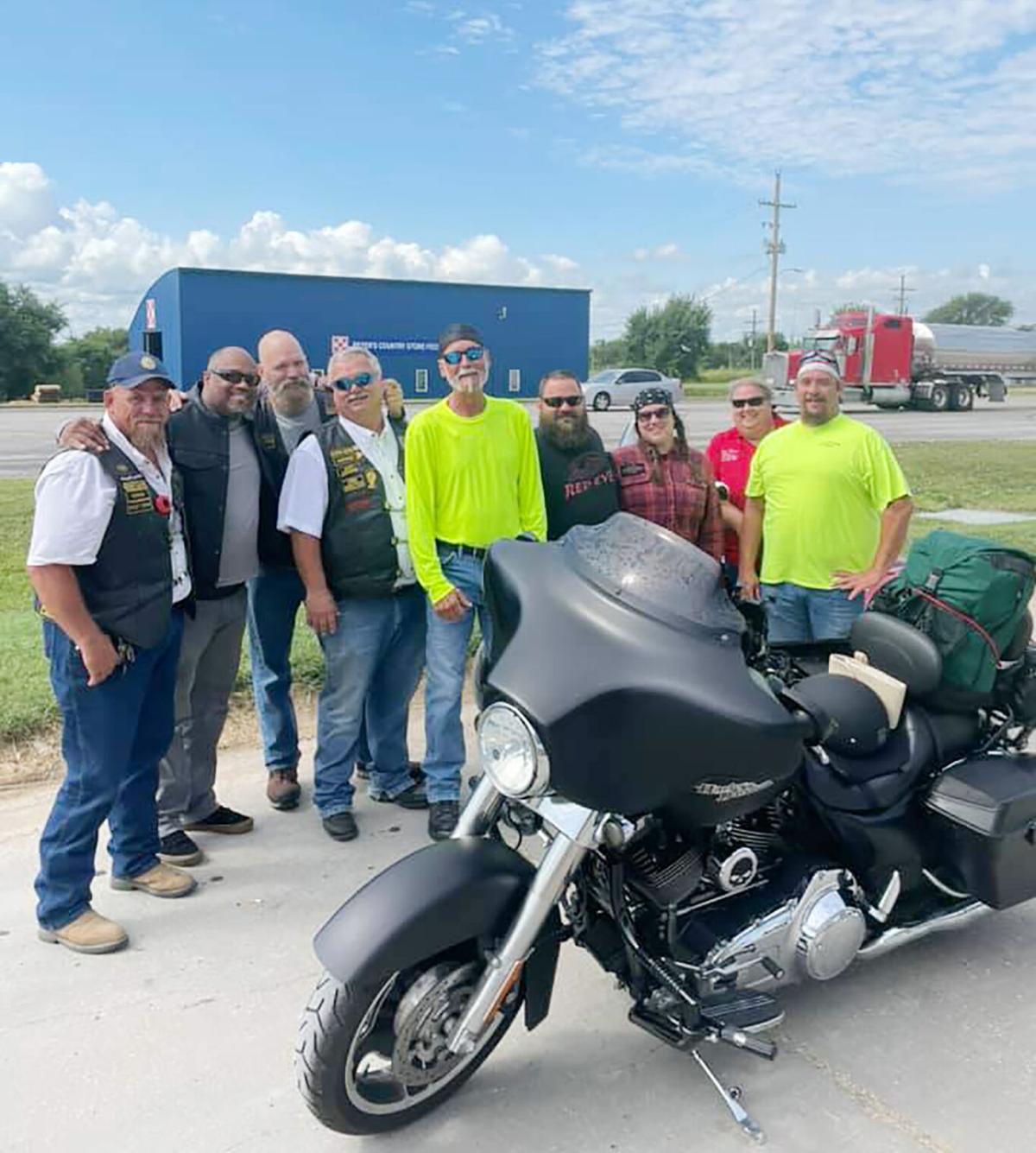 Chuck Smith (middle) is pictured with George Honn and several other friends and fellow Legion Riders at the beginning of his Chuck’s Last Ride motorcycle ride in August. The group rode the first 100 miles with Smith to help support his cause of raising awareness of teen suicide. 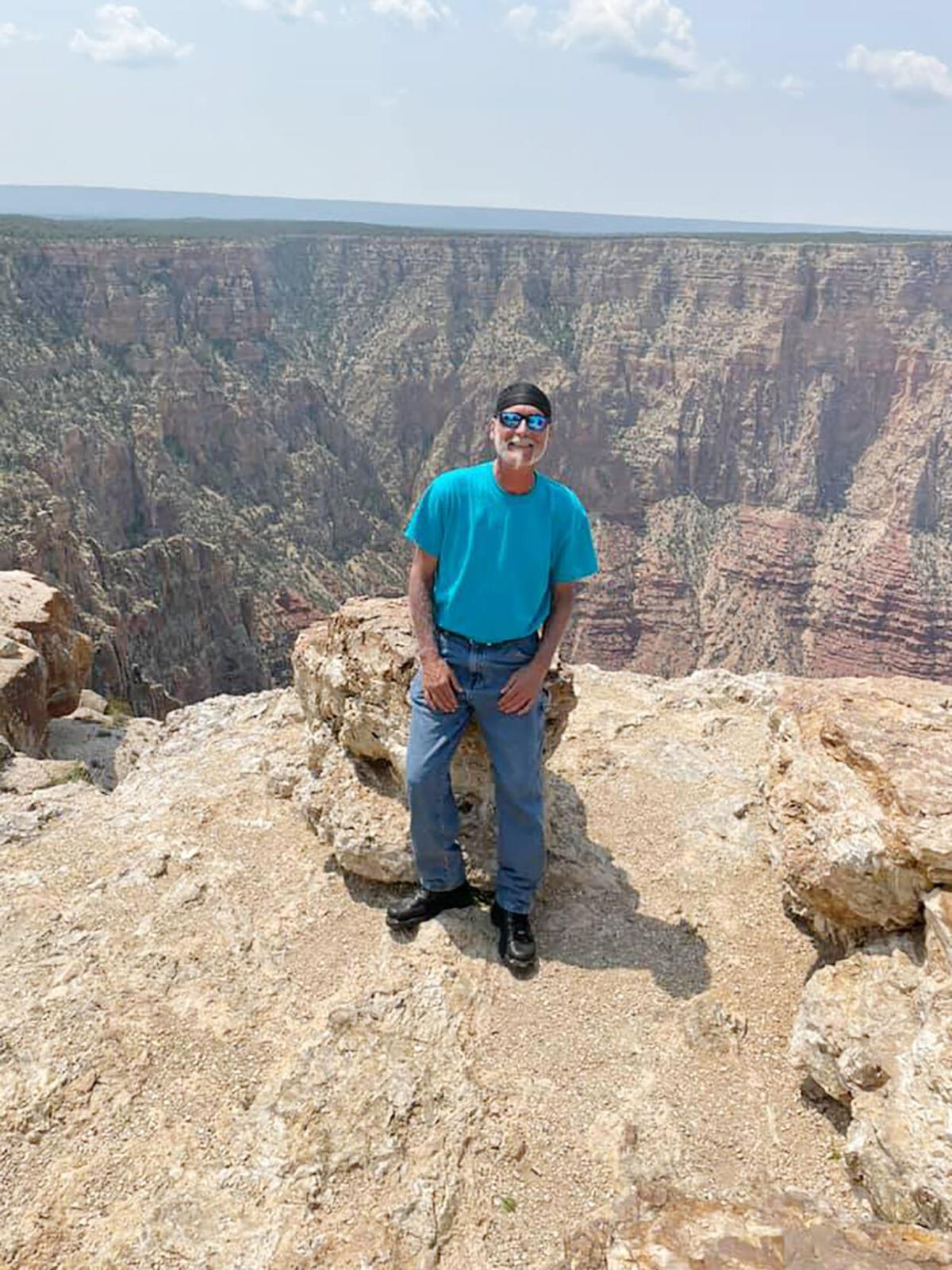 Chuck Smith stands at the rim of the Grand Canyon during his “Chuck’s Last Ride” fundraiser motorcycle ride in August to raise awareness of teen suicide.

Chuck Smith looks out over the Snake River in Yellowstone National Park during his most recent motorcycle ride to raise funds for teen suicide awareness.

Chuck Smith takes a selfie at the Grand Canyon during his “Chuck’s Last Ride” fundraiser motorcycle ride in August to raise awareness of teen suicide.

Chuck Smith (middle) is pictured with George Honn and several other friends and fellow Legion Riders at the beginning of his Chuck’s Last Ride motorcycle ride in August. The group rode the first 100 miles with Smith to help support his cause of raising awareness of teen suicide.

Chuck Smith stands at the rim of the Grand Canyon during his “Chuck’s Last Ride” fundraiser motorcycle ride in August to raise awareness of teen suicide.

When Chuck Smith decided earlier this year to take a motorcycle ride through the mountains of Colorado toward the Grand Canyon and across the rustic terrain of the western states, it was simply to clear his head and realize one of his dreams.

He was mentally and physically exhausted from a six-year battle with colon cancer, which he was diagnosed with in 2015, and he had made the decision to stop treatments and live the remainder of his life to the fullest.

His life, though, was nearly upended when his 14-year-old son attempted to take his own life with a butcher knife.

“He got lucky,” Smith said. “He missed his main artery by an eighth of an inch.”

The incident opened up Smith’s eyes to the dangers of teen suicide, and he is now on a mission to spread awareness and ensure parents are equipped with the proper knowledge to keep their children safe.

He ended up teaming up with members of the Father’s Club organization based primarily in Johnson County, and his planned motorcycle trip turned into a fundraiser for the group.

He called his trip “Chuck’s Last Ride,” and he created a Facebook page using that name where he posts regular updates and provides a “Contact Us” link where visitors can learn more and make a donation.

Smith said donations made through his page will go toward Father’s Club, but they will be kept in a separate account, giving Smith control over exactly what they are used for. Smith said Father’s Club is a great organization that covers a variety of topics, and he wants to make sure the donations he collects go to prevent teen suicide.

“If one kid benefits from this, we’ve done our job,” Smith said.

Smith lives in Miami County, and he said he has received a lot of support from the community, especially his fellow Legion Riders. George Honn is one of those riders, and he was so inspired by Smith’s story that he and a few other riders decided to ride the first 100 miles with Smith when he set off on his journey Aug. 14.

“Chuck is a great guy,” Honn said, adding that he and other Legion Riders have been impacted by suicide within their extended family. “We’re supporting our fellow Legion Rider.”

Smith said he’s also received a lot of support from his wife, Kim Holthouse. Before he left, he said he told his wife there is a chance he might not be coming back.

Smith ended up traveling more than 3,000 miles on his ride through Colorado, Utah and other areas, but he started to wear down at the end, and inclement weather prevented him from being able to see the Grand Teton mountains in Wyoming.

He quickly remedied that, though, with a second trip. He left Sept. 2 and returned Sept. 5 after getting to see Yellowstone National Park and the Grand Teton mountains.

“It was very spiritual to me,” Smith said. “It fulfilled something I wanted to do.”

More importantly to Smith, though, the ride managed to raise about $14,000 in just two and a half weeks.

Smith hopes the money can be used to prevent teen suicide in a variety of ways, including sending members of Fathers Club to classes, providing mental health information to parents and teaching warning signs of suicide.

Smith said a teenager’s brain is not yet fully developed, and they often act impulsively without seeing long-term consequences.

“When they see taking their life as their last resort, that’s all they see,” Smith said. “They don’t see any other option.”

The mission behind Chuck’s Last Ride is something Smith said he hopes continues long after he is gone.

“Hopefully, Chuck’s Last Ride doesn’t die with me,” he said.

For now, Smith said he will continue to talk about his story and teen suicide prevention, while posting frequent updates and inspirational messages on the Chuck’s Last Ride Facebook page. He’s also been asked to speak to young athletes at Olathe East, and he is considering scheduling more speaking engagements.

He knows, though, he will be at the mercy of his body. During the past six years, Smith has undergone nine microwave ablations, 90 radiation procedures, countless chemo treatments and developed radiation sickness that almost destroyed his liver. He’s also undergone procedures to remove 18 inches of his colon and about 8 inches of his small intestine.

His family recently convinced him to once again try a chemotherapy treatment he first did several years ago, and it has been a difficult process.

“The side effects are not going away like they used to,” he said.

Still, Smith said he is determined to maintain his rock solid faith in God and positive attitude.

“I’ve never asked why,” he said. “I gave it up the day I was diagnosed. I decided I’m gonna live, and I’m gonna show people how much love you can share. It’s like walking through Walmart. If you smile at somebody, 99 percent of the time they’re going to smile back at you. That just transferred some positive energy, and you just made their day.”

Community members can learn more about Chuck’s Last Ride on Facebook, and information on Father’s Club can be found online at fathersclub.org.