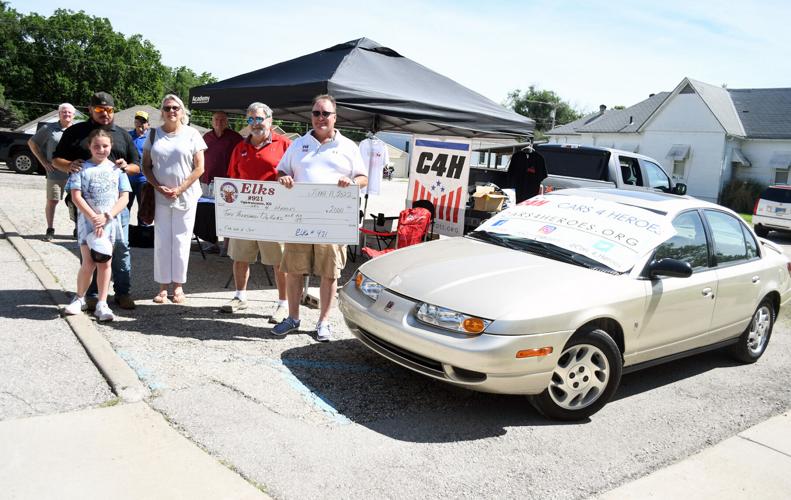 Richard Thompson (left) and his daughter Courtney are presented with the keys to a Saturn sedan by Cars 4 Heroes, including (from left) Cynthia Forsberg, Terry “Car Santa” Franz and David Trageser during Flag Day ceremonies held at the Osawatomie Elks Lodge No. 921 on Saturday, June 11. 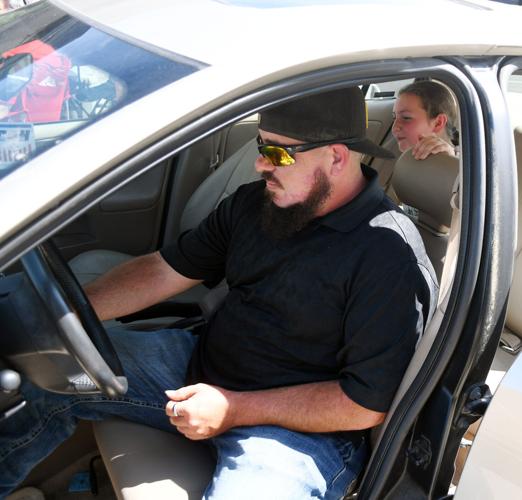 Richard Thompson of Vassar, Kan., and his daughter Courtney check out a new Saturn sedan he was presented with by Cars 4 Heroes.

Richard Thompson (left) and his daughter Courtney are presented with the keys to a Saturn sedan by Cars 4 Heroes, including (from left) Cynthia Forsberg, Terry “Car Santa” Franz and David Trageser during Flag Day ceremonies held at the Osawatomie Elks Lodge No. 921 on Saturday, June 11.

Richard Thompson of Vassar, Kan., and his daughter Courtney check out a new Saturn sedan he was presented with by Cars 4 Heroes.

OSAWATOMIE — Richard Thompson, a single dad, had been driving an old pickup truck from his home in Vassar, Kan., to his job as the maintenance man working on the football and soccer fields at Ottawa High School.

When the engine in his truck blew out, Thompson borrowed his parents’ vehicle to get to and from work while still paying on his truck.

Thanks to Terry “Car Santa” Franz, Cynthia Forsberg, David Trageser and Denisha Jackson with Cars 4 Heroes, Thompson has a new Saturn sedan to get to and from work.

Thompson served in the United States Navy for six years, including tours in Iraq and Japan. He served as a medical field technician and surgical technologist.

Thompson was presented with the keys to the Saturn during the Osawatomie Elks Lodge No. 921 annual Flag Day ceremonies. Local Scouts carried flags from throughout American history. Paola and Osawatomie American Legion members fired a gun salute.

“I am just overwhelmed,” Richard Thompson said, who was joined at the ceremony by his 10-year-old daughter Courtney. “This is just amazing what Cars 4 Heroes is doing for veterans like me.”

“We give 300 cars a year away to support veterans,” Franz said. “We have also started giving cars away to police officers, firefighters and first responders. This doesn’t work without support of communities like yours.”

Forsberg, who writes the grants, said it is important to recognize when a veteran needs assistant and nominate them for Cars 4 Heroes. Most of them do not want to come forward, even when they need the assistance.

Thompson was nominated for Cars 4 Heroes by his parents John and Freda Thompson.

“This is a miracle,” Freda Thompson said.

Richard Thompson is a devoted father, Freda Thompson said. He leaves early in the morning to get Courtney to middle school. She rides the bus to her grandparents’ house where Richard arrives to pick her up after work each day.

“The motor in his truck went out, leaving him without a vehicle,” she said. “He lives 25 miles away from work and needs reliable transportation. Richard does without things for himself to provide for what his daughter needs.

“He is currently borrowing his parents’ vehicle because he still owes two years of payments on his broken truck,” Thompson said. “He cannot afford to go buy another vehicle.

“Getting a working vehicle would give Richard back his independence and a sense of freedom,” she said. “He deserves a helping hand at this time.”

Trageser and Jackson were running a table for Cars 4 Heroes during the flag day event, handing out T-shirts, car air fresheners and bottles of water.

“It is so awesome to be a part of this event,” Jackson said.