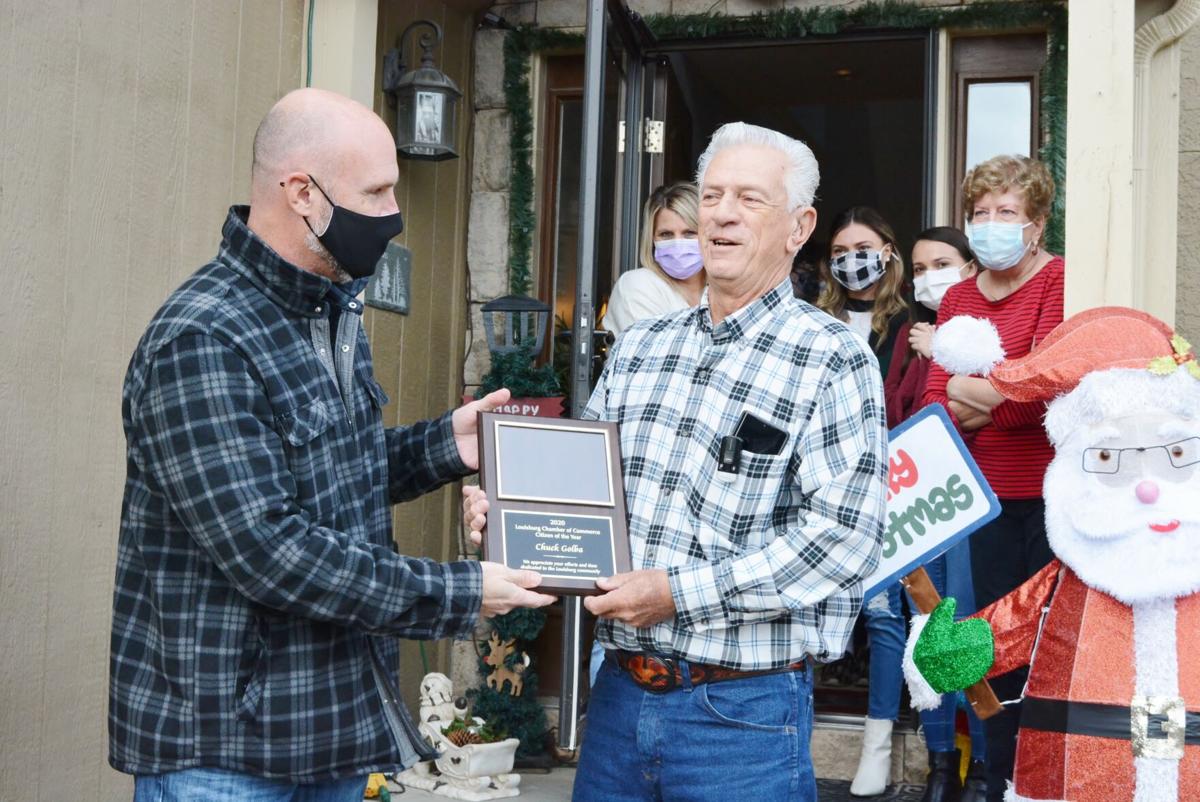 Joel Viterna, Louisburg Chamber of Commerce’s incoming president, presents Chuck Golba with the Chamber’s 2020 Citizen of the Year award in front of his home at the City Lake subdivision. 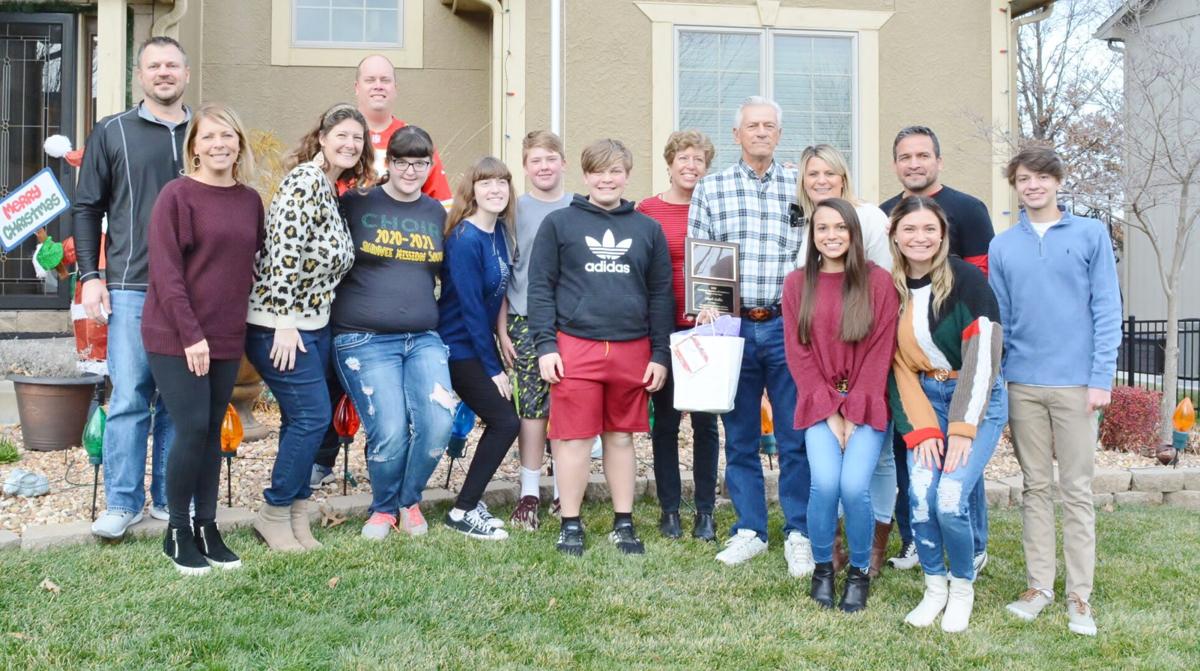 Chuck Golba (holding plaque) stands with his wife Becky and other family members in front of the Golbas’ home in the lake subdivision moments after learning he was named the Louisburg Chamber of Commerce’s 2020 Citizen of the Year.

Joel Viterna, Louisburg Chamber of Commerce’s incoming president, presents Chuck Golba with the Chamber’s 2020 Citizen of the Year award in front of his home at the City Lake subdivision.

Chuck Golba (holding plaque) stands with his wife Becky and other family members in front of the Golbas’ home in the lake subdivision moments after learning he was named the Louisburg Chamber of Commerce’s 2020 Citizen of the Year.

LOUISBURG — Chuck Golba was in the midst of an early Christmas celebration with his family on a recent Sunday when the Louisburg retiree learned a group of people had gathered outside his home at City Lake.

It wasn’t a group of carolers, but they did bring good tidings.

Joel Viterna, incoming president of the Louisburg Chamber of Commerce, greeted Golba with a smile and a plaque to honor the longtime resident as the Chamber’s 2020 Citizen of the Year.

The top citizen is recognized at the Chamber’s annual dinner, and the announcement is usually a well-guarded secret until that evening. The Chamber dinner was canceled this year because of the pandemic, but the Chamber and Golba’s wife Becky still wanted to make the award a surprise.

“It was a total surprise,” Chuck Golba said. “We had our kids over for an early Christmas, and my wife kept telling me I needed to go outside. I couldn’t figure out why and then I looked outside and saw all those people. I thought, ‘Oh, I don’t know what this is, but I better go see.’”

The 75-year-old Golba accepted his plaque to applause from Chamber representatives lining his driveway and family members huddled at the open front door to watch. The award was presented to Golba in recognition of his volunteer work throughout the community. In a follow-up interview, Golba said he was humbled and honored to be named Citizen of the Year.

Overland Park residents Chuck and Becky Golba invested their future in the Louisburg community when they bought eight acres on the southeast corner of 263rd Street and Jingo Road in the 1980s.

“We went out on a lot of weekends to do some clearing since it looked like a jungle,” Becky said. “After our kids were out of high school, we went ahead and started building our home in 1994 and moved in the spring of 1995.”

The Golbas moved from their rural Louisburg home to the Lake subdivision in 2012.

Chuck has a daughter, Cindy, a son, Curtis, and a stepson, Brian. He and Becky have eight grandchildren. Becky said the children have inherited her husband’s strong work ethic. The oldest of five, Chuck was born in Gardner. He attended Shawnee Mission North for two years and then switched to De Soto after his family bought a home in the country, Becky said.

“We’ve had a lot of family trips and for several summers in a row, we did these trips with our kids, his parents and three of his siblings in a motor home,” Becky said. “His mom always said we should go on Oprah since the nine of us traveled 6,000 miles without killing each other.”

Golba started helping in the family garden when he was 3 or 4 years old and later enjoyed working on other farms. After serving in the Air Force, he worked for General Motors for 20 years, then in the asphalt/construction business until his retirement. He owned a company with a partner for several years.

Though retired, Golba continues to put his strong work ethic to use by striping soccer fields at Lewis-Young Park, and striving to keep the popular walking trail around City Lake in pristine condition for the whole community to enjoy.

Golba has been striping 12 soccer fields at Lewis-Young Park for several years.

“I enjoy walking around the fields. Sometimes I do it in two days,” Golba said. “It doesn’t take that long but I like to take my time. It’s good exercise.”

He also gets his exercise clearing brush and tree limbs and mowing around the lake.

“Becky and I like walking around the lake,” Golba said. “There’s a lot of times you have to kinda duck under the tree for limbs that were hanging real low and it just got overgrown.

“One gal said she quit walking ‘cause that poison ivy had grown up real close to the trail,” he said. “So I just went and tore out (the poison ivy) and decided the trail would be a good project, and it keeps me busy.”

“It helps safety-wise, especially in the evening if somebody is walking around the lake,” he said. “It’s interesting what you find out there. I was clearing brush, and I found five brand new golf balls. I have no idea how they got there?”

Golba is active in the church and is a member of the Knights of Columbus, where he has served as treasurer for several years. He helps with most of the organization’s projects.

A Vietnam veteran, Golba said one of the volunteer projects he enjoys the most is helping veterans get the benefits they are entitled to receive for serving their country.

In 1965, Golba enlisted in the U.S. Air Force and was ordered to deploy to Vietnam on New Year’s Eve 1966. He served one year in Vietnam where he was in charge of the bomb dump at Bien Hoa Air Base.

Golba helps lead a meeting Tuesday evenings to assist veterans with getting their benefits. He has traveled to several states to meet up with veterans who need help, and has gone to state prisons to help veterans understand about post-traumatic stress disorder (PTSD) and their benefits, Becky said.

Golba relayed one account about a veteran with PTSD who lived in a trailer with his wife. They were juggling bills and could not afford the $700 monthly rent in one installment, so they were paying their landlord $350 twice a month.

“They were struggling to get by, and he had PTSD,” Golba said. “We were able to help him get 100 percent of his benefits.”

Great story about a great Vietnam Veteran. See more on that here: https://vietnamveterannews.com/episode-1936/