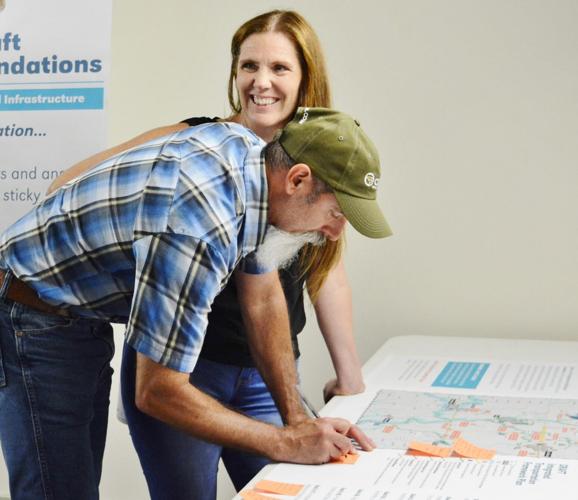 Brian Dowling writes out some feedback about a draft county comprehensive plan on display during an open house Tuesday, May 17, at the Paola Community Center. Alongside Dowling is his wife, Mara Dowling, who is talking with some other attendees. 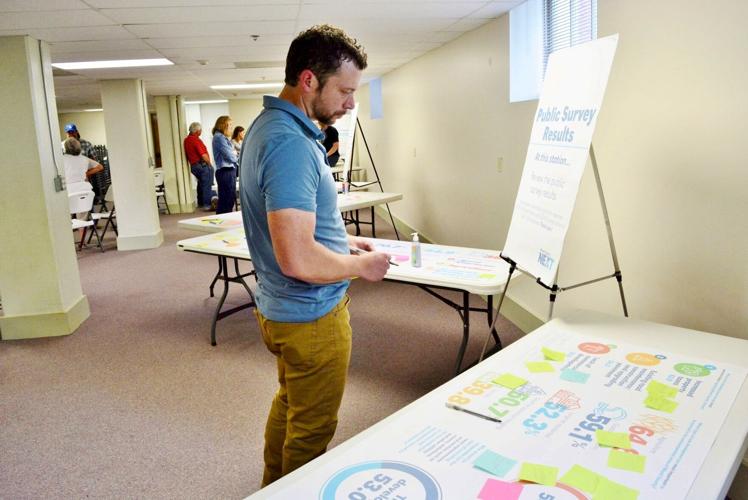 Northern Miami County resident Charlie Koch studies comments attached to the public survey results of a draft county comprehensive plan. He was among the 55 attendees of an open house Tuesday, May 17, at the Paola Community Center.

Brian Dowling writes out some feedback about a draft county comprehensive plan on display during an open house Tuesday, May 17, at the Paola Community Center. Alongside Dowling is his wife, Mara Dowling, who is talking with some other attendees.

Northern Miami County resident Charlie Koch studies comments attached to the public survey results of a draft county comprehensive plan. He was among the 55 attendees of an open house Tuesday, May 17, at the Paola Community Center.

PAOLA — Northern Miami County resident Charlie Koch studied the public survey results of a draft comprehensive plan that were laid out in front of him.

As part of the Miami County Comprehensive Plan process, the county and its consultant, The Olsson Studio, are continuing to gather feedback from the public.

Koch was among the 55 attendees of a comprehensive plan open house Tuesday, May 17 at the Paola Community Center.

He was interested in seeing what the preliminary land use proposal was for the northwest corner of the county. Koch said he wanted to keep intermodal warehouses at Edgerton from encroaching farther into Miami County.

A team from The Olsson Studio said it was pleased with the open house and the feedback it generated.

“During the previous public open house back in late February 2021, we had several more attendees take advantage of the virtual public open house option than the in-person option,” said Taylor Plummer, senior planner/community planning with The Olsson Studio. “We anticipate the same thing with this round. The virtual open house is now live via the project website.”

The virtual open house can be accessed at www.miamicountyksplan.com. It will be available through June 2.

The virtual open house presents all the same information as was available at the in-person open house and allows for commenting through an online commenting software, Plummer said.

“For the most part, I think we had a good turnout,” Reeves said. “I hope the virtual open house draws more attendance and feedback.”

Attendees of the in-person open house May 17 focused most of their feedback on a few specific areas, Plummer said.

“It seemed like attendees on Tuesday night were most interested in the future land use and economic development section of the plan, which is typical of comprehensive plans,” Plummer said. “The public survey results gathered quite a bit of attention, as well.”

Plummer addressed a few of the comments left by attendees.

“The comments were not overly surprisingly, though we did receive a couple interesting thoughts,” Plummer said. “At the What Did We Miss? station, we received comments stating, ‘Intentional inclusion of younger generations’ and ‘Intentional inclusion and outreach for kids, teens, young adults, emerging professionals — we have ideas, too.’”

The consulting team also received a comment about the draft Integrated Transportation Framework Plan that mentioned the idea of including equestrian uses through a potential trail system, Plummer said.

Plummer emphasized in an email that the concepts presented at the open house are still in the draft phase.

“It is important to remember that the open house (both in-person and virtual) presents DRAFT concepts/idea/plans and is just one of the ways we engage with the public,” Plummer wrote. “There will be other opportunities.”