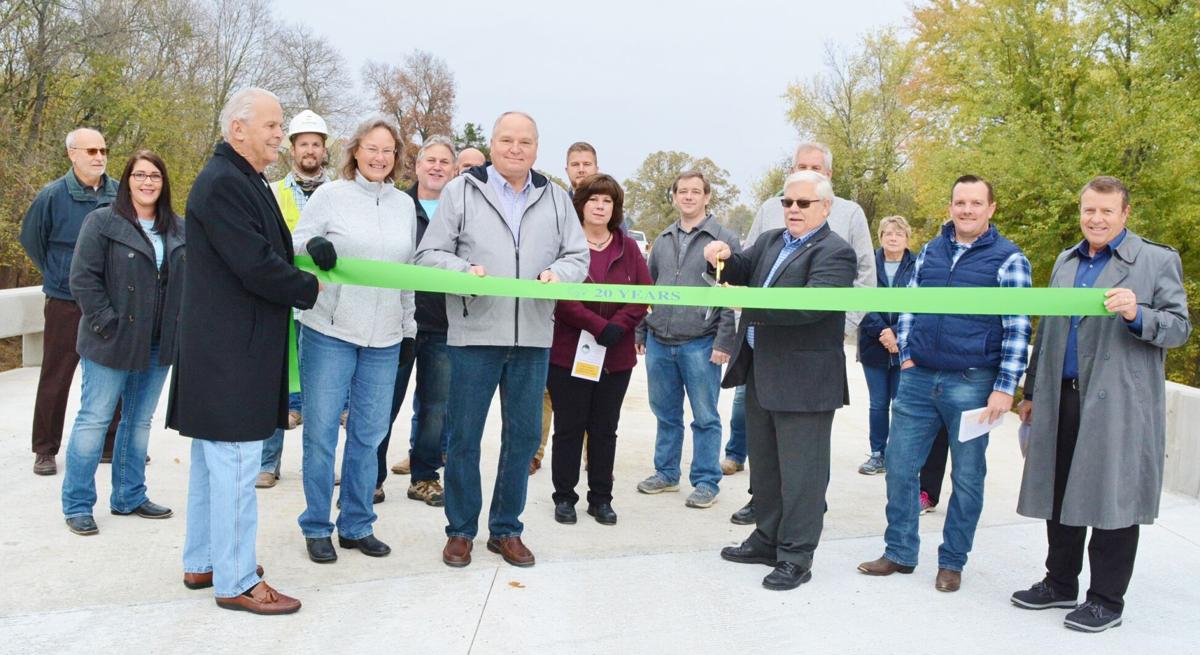 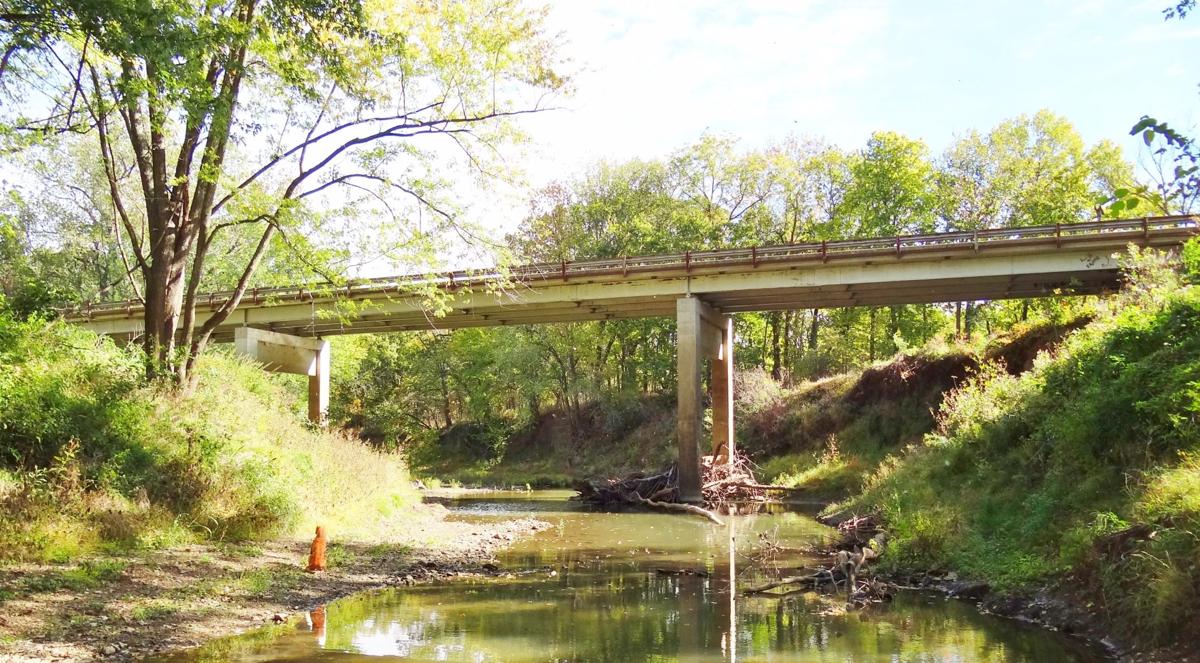 This photo of the old Hedge Lane bridge over South Wea Creek shows how much the channel has shifted since the bridge was built in 1952. When it was constructed, the pier in the center of the photograph was not located in the channel.

This photo of the old Hedge Lane bridge over South Wea Creek shows how much the channel has shifted since the bridge was built in 1952. When it was constructed, the pier in the center of the photograph was not located in the channel.

PAOLA — County commissioners on Wednesday, Oct. 21, gathered to celebrate the completion of the Hedge Lane bridge with a ribbon-cutting ceremony.

Commissioners do not have a ribbon-cutting ceremony every time a bridge project is finished.

County staff members, representatives of construction and engineering companies and neighboring residents joined county commissioners at the north end of the bridge for the ceremony.

Commission Chairman Rob Roberts talked about the history of the quarter-cent sales tax, which has contributed to more than 35 Road and Bridge projects in the past two decades. The tax generated nearly $16.7 million during the 20-year run and helped the county secure about $14.4 million from other sources.

Roberts thanked Miami County residents for approving the sales tax and entrusting the county to fulfill its promises on how the money would be spent, and he thanked neighbors along Hedge Lane for their patience while the road has been closed to through traffic.

Raising a program listing quarter-cent sales tax projects in his right hand, Roberts said he was happy to report the county kept its promise.

Signs of promises kept are visible across the county, including the Osawatomie Main Street revitalization project, the 223rd Street railroad underpass near Spring Hill, the Kansas Highway 68 and Metcalf Road intersection in Louisburg, and the just completed Hedge Lane bridge near Paola.

Roberts also thanked Road and Bridge Director J.R. McMahon, who has been with the department for all of the quarter-cent sales tax projects.

McMahon gave credit to his team at Road and Bridge and singled out Project Manager Matt Oehlert for his work on a number of the projects, including the bridge they were standing on.

The Hedge Lane bridge replacement project began in early April and wrapped up before the estimated completion date of Tuesday, Oct. 23.

Traffic on the bridge, built in the early 1950s southeast of Paola, normally is substantial with an average daily count of about 1,400 vehicles, according to the most recent study.

Miami County commissioners awarded the construction project to Wichita-based Dondlinger & Sons Construction Co. Inc., which submitted the low bid of $1,489,996.78. The bid came in under the budget estimate of $1.53 million. The county’s quarter-cent sales tax was the primary funding source for the project.

The center span was lengthened and the structure was moved about 60 feet south to compensate for the channel’s southern migration. The new bridge is wider and its length expanded from 293 feet to about 400 feet.

“(The channel) is already scouring pier No. 1, which is the southern pier, and encroaching on the embankment,” Oehlert said when the project began in April. “It’s beginning to undermine the southern abutment.”

The swath carved out of the embankment up to the southern abutment was drastic, with the southern bridge pier now located in the creek.

Oehlert was commended for saving the county more than $400,000 in beams alone by coming up with a plan to stretch the middle pier instead of adding a proposed fourth pier.

“We were able to eliminate quite a bit of money while making sure that we are still decades away from that channel ever encroaching again,” Oehlert said in that earlier interview. “You can see how far the channel has moved because that (southern) pier was not originally in the channel.”

In addition to contractor Dondlinger and Sons, Baldridge Engineering provided the construction engineering, and Pfefferkorn Engineering & Environmental LLC was the project’s design engineer.