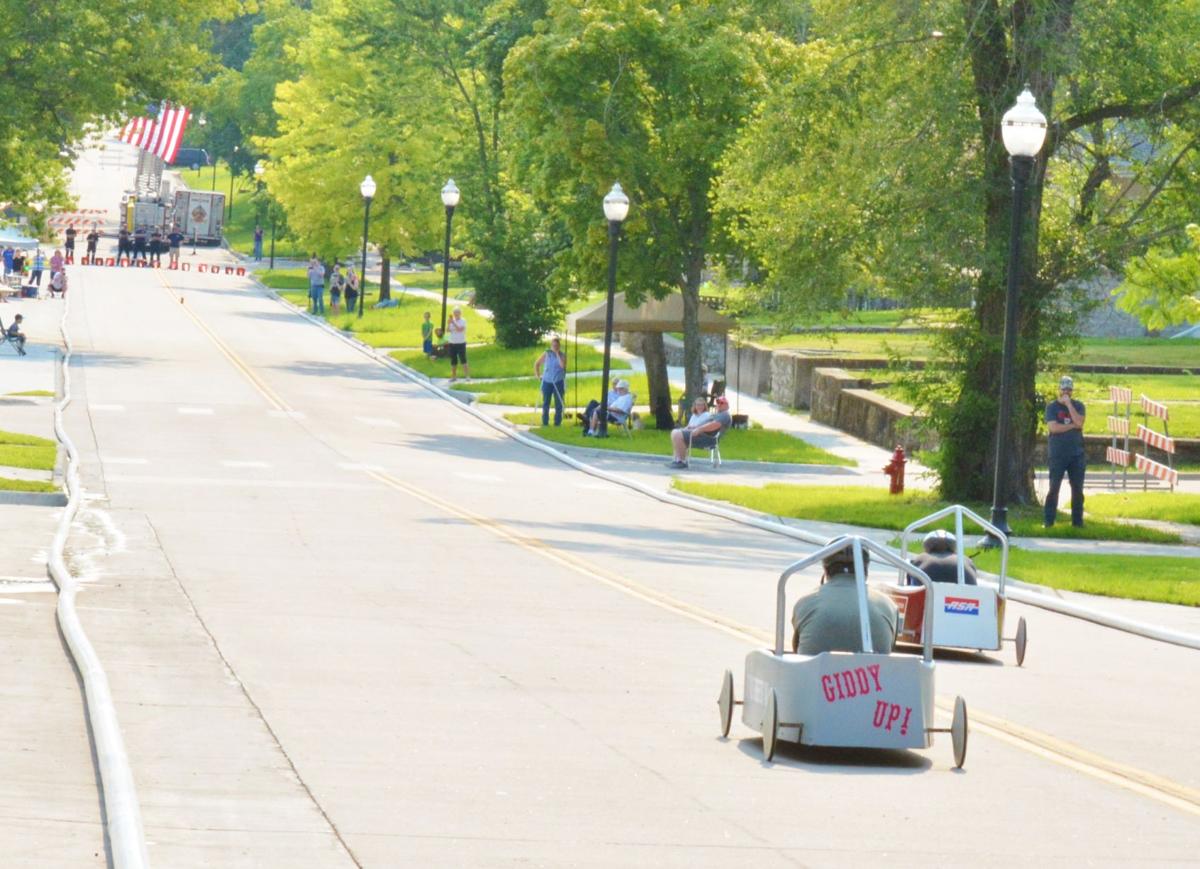 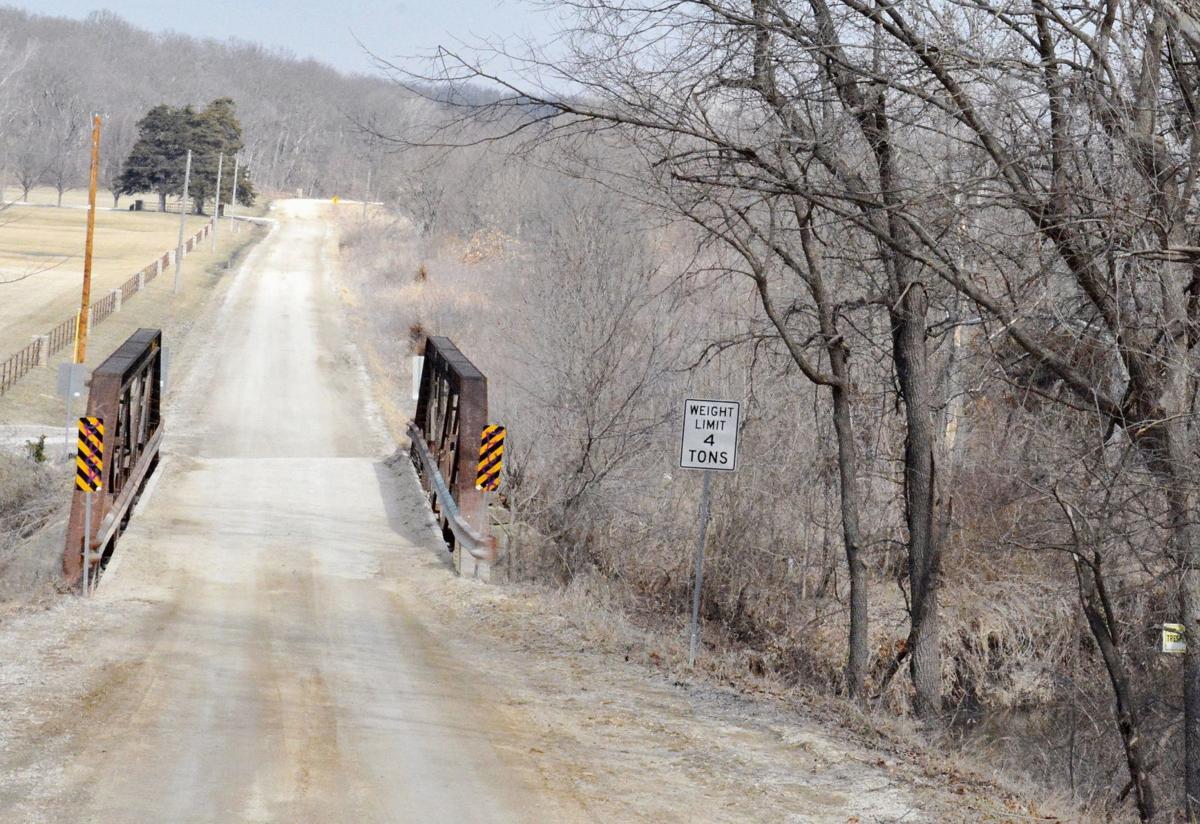 Work started in the spring to replace the Spring Valley Road bridge, located south of 255th Street near Louisburg. The old bridge (pictured here) was built in 1920 and spans North Wea Creek. The recently completed project was funded by the county’s quarter-cent sales tax used for road and bridge work.

Work started in the spring to replace the Spring Valley Road bridge, located south of 255th Street near Louisburg. The old bridge (pictured here) was built in 1920 and spans North Wea Creek. The recently completed project was funded by the county’s quarter-cent sales tax used for road and bridge work.

Logan York was pleased to see the “road closed” signs come down in September near the Spring Valley Road bridge west of Louisburg.

The bridge reopened just in time for the pumpkin-picking season.

“I was really glad to see it open,” York, one of the Powell Pumpkin Patch owners, said in mid-September. “The new bridge looks good.”

The wider bridge also is no longer limited to three tons, which will enable the family to move farm equipment without having to take the long way around, York said.

The bridge replacement is just one of many projects that has been funded by Miami County’s quarter-cent sales tax, which will soon be up for renewal.

The quarter-cent represents 25 cents of every $100 spent in Miami County, not only by county residents but out-of-county shoppers who spend their dollars in the county.

The tax in the past two decades has generated more than $23 million in road and bridge improvements throughout the county. It also has helped the county and municipal governments within the county capture more than $18.4 million in state and federal grant money, according to county figures.

County commissioners have said during recent study sessions that the quarter-cent sales tax reduces the amount of property taxes needed for road and bridge work.

Commissioner Rob Roberts said the sales tax is vitally important to the county for continued funding of roadway and bridge improvements.

Since its inception in 2001, the quarter-cent sales tax has generated more than $13.9 million for road and bridge improvements in rural portions of the county. It has allowed the county to capture additional funding of more than $16.6 million through matching federal and state grant money, according to county figures.

The tax not only pays for improvements to the county’s road and bridge system, it has also benefited the county’s communities, county commissioners said.

The sales tax has provided more than $3.1 million for roadway improvements in Paola, Osawatomie, Louisburg and Spring Hill. It also has helped the county capture $1.8 million in federal and state grant funds, according to county figures.

In addition to the county’s four largest communities, the sales tax paid for street asphalt overlay work in Fontana, according to the county.

During each five-year cycle of the quarter-cent sales tax, the cities of Paola, Osawatomie, Spring Hill and Louisburg all receive $500,000.

The Paola City Council is supportive of the renewal and was expected to sign a formal letter of support for Miami County’s quarter-cent sales tax at its Oct. 8 meeting, City Manager Jay Wieland said.

“The city of Paola has a number of roadway projects under consideration or in final planning stages including the widening and modernization of traffic signals on the Baptiste/Hedge Lane intersection, roadway and drainage improvements on Industrial Road, the extension of Baptiste Drive from the Silver Street/Baptiste Drive intersection east to Iron Street, and other modifications to Hedge Lane,” Wieland said.

The Louisburg City Council offered its formal support for the quarter-cent sales tax at its meeting Monday, Oct. 7.

The city plans to use the $500,000 it receives from the tax to help fund its share of a joint city-county project called Metcalf 2.0 which will make substantial improvements to that busy thoroughfare.

The Metcalf Road project — estimated to cost $4.6 million — covers 4,850 feet, from Amity Street (Kansas Highway 68) to 287th Street in Louisburg. The project is slated to be funded by a $3.1 million federal grant from the Mid-America Regional Council, with the remaining necessary funding split equally between the city and the county.

Osawatomie and Spring Hill also have been supportive of the tax.

The city of Osawatomie has used its $500,000 to make improvements to its Main Street as well as help fund other projects.

“This tax has been very beneficial with several of our infrastructure needs, most recently the Main Street and 343rd Street reconstruction and Creamery (Bridge) rehabilitation,” Govea said. “City infrastructure is always an issue for all cities. It seems to be easily forgotten and not typically as popular as new projects.”

If the tax is renewed by voters in November, Osawatomie has expressed interest in using some of its next $500,000 installment to make improvements to Sixth Street, according to a county document.

Spring Hill is looking to use $500,000 from the quarter-cent sales tax to improve the busy Spring Hill intersection of 223rd Street and Webster Street, city and county officials have said.

In addition to these projects totaling $2 million between the four cities, funds generated by renewal of the quarter-cent sales tax would pay for more than $3.6 million in projects in rural parts of the county during the next five years, according to the county.

County projects under consideration during the next five-year cycle of the tax include:

City projects completed with quarter-cent sales tax funding from its inception in 2001 to present:

County projects completed from 2001 to present: