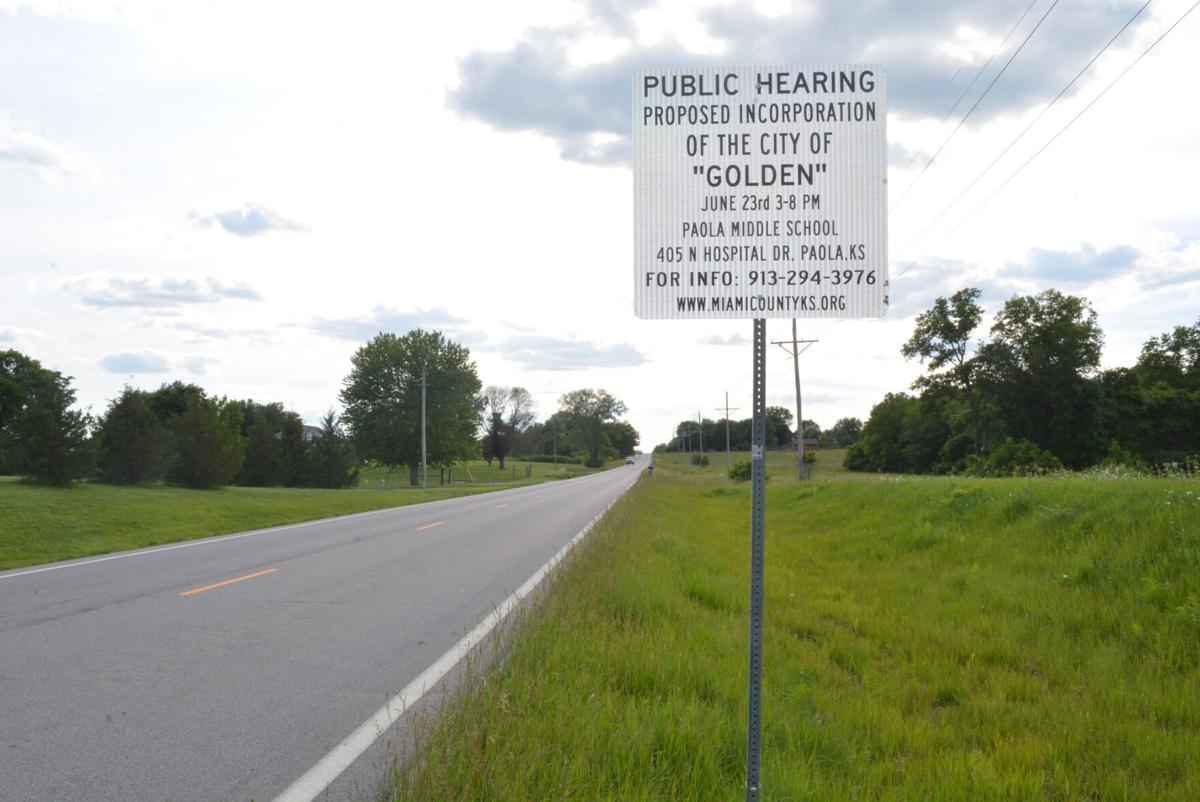 A sign on 223rd Street east of Cedar Niles Road lets motorists know that a public hearing is scheduled to take place June 23 at Paola Middle School to discuss the proposed incorporation of the city of Golden. 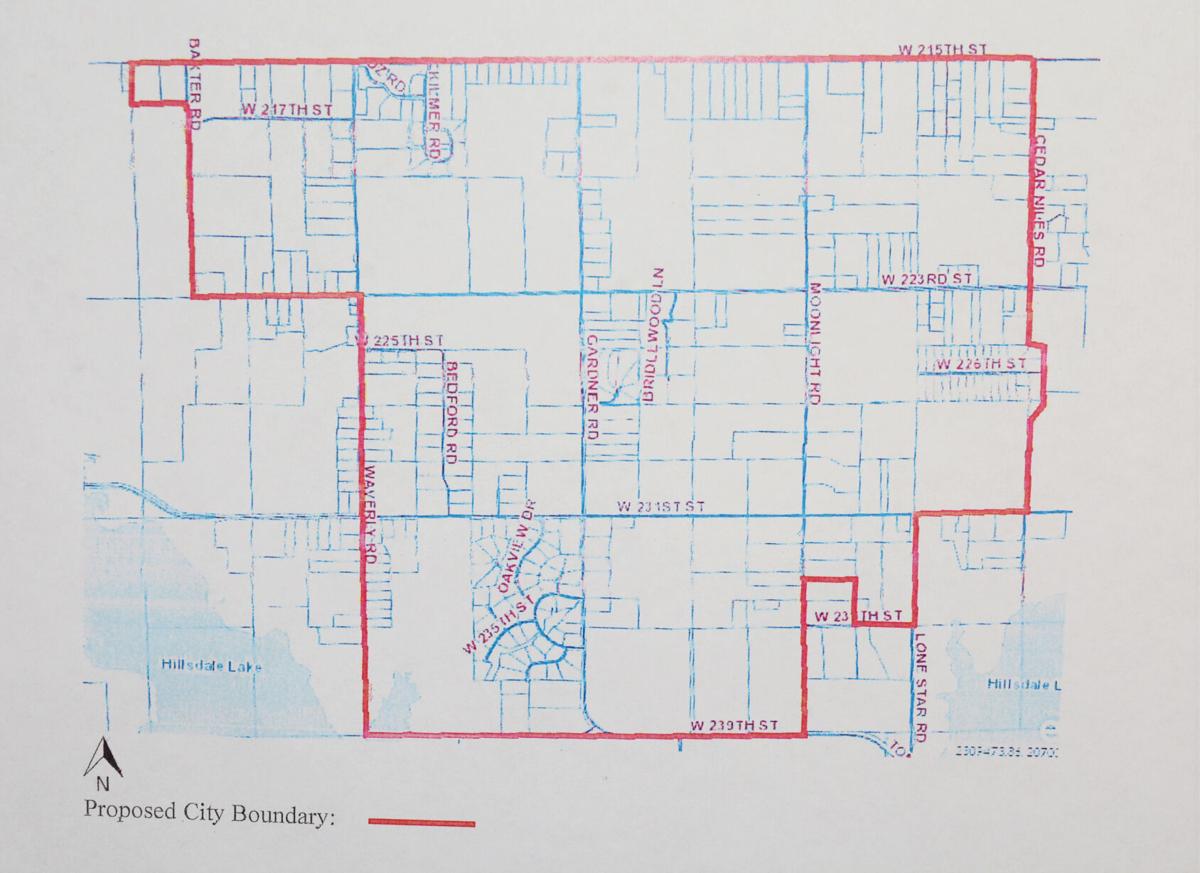 This map outlines the boundaries of the proposed city of Golden in northern Miami County.

A sign on 223rd Street east of Cedar Niles Road lets motorists know that a public hearing is scheduled to take place June 23 at Paola Middle School to discuss the proposed incorporation of the city of Golden.

This map outlines the boundaries of the proposed city of Golden in northern Miami County.

For Jennifer Williams and the nearly 300 others who signed a petition to establish a new 9-square-mile third class city named Golden north of Hillsdale Lake in Miami County, the need is clear.

The neighbors are concerned because of what is happening just north of the county line, where NorthPoint Development is working with the city of Edgerton to annex land for proposed industrial warehouses. Becoming a city would give them more control over potential rezonings and help them preserve their rural lifestyle.

“We don’t want to wait until they infiltrate the Miami County border and it’s too late for us,” Williams has said. “It’s giving the residents a voice.”

For Tom Bach, though, and the more than 100 others who have signed a petition against the incorporation of the city of Golden, the issue is not that simple.

Bach said the incorporation of the city could limit the county’s options for future growth and development, and he said those seeking to establish Golden are only focusing on one issue and not realizing the other impacts of starting a city, such as police and fire protection and taxes.

Both sides have hired legal representation, and their cases will be made during a public hearing that is scheduled to take place from 3 to 8 p.m. Wednesday, June 23, at Paola Middle School, located at 405 N. Hospital Drive in Paola.

Miami County commissioners will listen to comments during the hearing and have been directed to consider 14 factors mapped out in state law, as well as additional factors they deem relevant, according to the hearing’s public notice.

At the County Commission’s May 19 study session, Chair Rob Roberts outlined the process moving forward after the public hearing is completed. He emphasized no decision will be made at the June 23 public hearing.

Roberts outlined a three-meeting process that is likely to stretch over a period of weeks. The first meeting is the public hearing.

At the second meeting, the commission will hear from expert witnesses on a variety of topics such as costs associated with providing law enforcement, road maintenance and other services to Golden in the event they are requested.

“The second meeting would be one where we bring in expert witnesses to answer questions that we have,” Roberts said.

The third meeting will be the deliberation, which will culminate with the commission’s decision.

Roberts said the second and third meetings will take place in the commission chambers in the county administration building and will be open to the public. Those meetings have not yet been scheduled.

Local residents don’t have to wait for the June 23 public hearing to voice their opinions on the issue. Comments and other material can be submitted to the Miami County Clerk until 5 p.m. Friday, June 11. Materials can be submitted through email to countyclerk@miamicountyks.org or in person at the Miami County Administration Building in Paola. Submitted materials will be posted on the county’s website at www.miamicountyks.org. Responses to posted material also will be posted if received before the deadline.

There were more than 20 public comments posted on the county’s website as of Tuesday, June 8, and all but four of them are in favor of incorporating the city of Golden. Many of the submitted comments use the same letter template, which states they are a resident within the proposed city boundaries and asks the county commissioners to vote yes for the incorporation of Golden so they can protect their property and property rights.

“By forming our own city, with elected officials from our borders elected by us, we are being given the opportunity to exercise and protect those rights. Without this incorporation, you are leaving us in a vulnerable position where the future of our area and our investments are left in the hands of outsiders who do not represent us and who do not have our best interest at heart,” the letters state. “As a commissioner, you are aware that there is absolutely nothing you or the county can do to stop consent annexations, leaving the citizens in this area with no protection from the outside invasion; an invasion that is inevitable if you do not allow us to protect ourselves.”

Ronald Elrod submitted a letter in opposition of the incorporation. Elrod said he appreciates the fact that Miami County currently maintains the roads and provides law enforcement protection for the area, as well as paying Johnson County for fire protection. Elrod said the population of about 750 people for the proposed 9 square miles does not make it feasible to establish a city, and he also doesn’t believe it could be done with taxes staying the same or only going up two mills as he has been told by supporters.

“If Golden becomes a city, it would have no finances to provide law enforcement, fire protection, road maintenance and improvement, and no plans or means of providing sewage availability,” Elrod wrote in his letter. “If the city is incorporated it will destroy our friendly agricultural and residential way of life.”

Williams said she and her neighbors were told by sheriff’s office representatives that they would continue to be served by the sheriff’s office, even if Golden becomes a city.

Sheriff Frank Kelly said the sheriff’s office is already providing services to the city of Fontana, which also is a third class city without a police force, so he believes Golden would be handled the same way unless he is told otherwise.

Ethan Rice also submitted a letter in opposition to the proposed incorporation.

“I have lived in rural areas my whole life and do not like the idea of being forced into some new city,” Rice wrote. “I fear all this will do is raise my taxes even more than they already get raised yearly, to pay for a new city council that will just cause more bureaucracy and act as an overzealous homeowners association.”

Dennis Koch submitted a lengthy letter to the county stating why he is favor of incorporating the city of Golden. In his letter, Koch responds to the multiple concerns he has heard from some of his neighbors. Koch said homes in Golden would not be required to change from septic to sewer systems, and the taxes will not increase dramatically.

“The city may have to take responsibility for some services from the county, but that does not mean that residents will be forced to pay double tax for the same service,” Koch wrote. “Plus, as a city, Golden will receive funding from other tax sources in the county and state that will offset any costs that the city incurs. The city tax will not be 52 mils, and the initial cost to operate the city will not be $750,000.”

Those numbers are mentioned in a message that accompanies the petition from residents who oppose the incorporation of the city of Golden. Bach, who has served on the county’s board of zoning appeals for nearly 20 years and has experience as a township trustee, said the message will be sent to county commissioners and it outlines eight reasons why they oppose the proposed incorporation.

The reasons range from the belief that the petitioner has grossly underestimated the true cost of expenditures and that the only clear goal seems to be to stop commercial development in northern Miami County.

“It is clear to us that if this city is formed, it would forever preclude the opportunity for Miami County, as a whole, to gain a tax base associated with the Logistics Park, KC Intermodal and associated commercial business development in northern Miami County,” the message states. “We are concerned that if the city of Golden, Ks. Incorporation is approved, it could set a dangerous precedent that other special interest groups that have an agenda could also request special consideration to form a city to the detriment of Miami County and the overall orderly and economic development of the county.”

Williams has said that the proposal is well thought out, and she maps out the details in a 38-minute Youtube video called “Golden Kansas.” She also has created a GoFundMe page to try and raise funds to pay for the attorney that has been hired to complete necessary legal filings and notifications. So far, the page has raised just over $2,000 of its $5,000 goal.