You are the owner of this article.
Edit Article Add New Article
You have permission to edit this article.
Edit
News
Announcements
Voices
Sports
Obituaries
Special Sections
Multimedia
Classifieds
Contests
Info
1 of 6 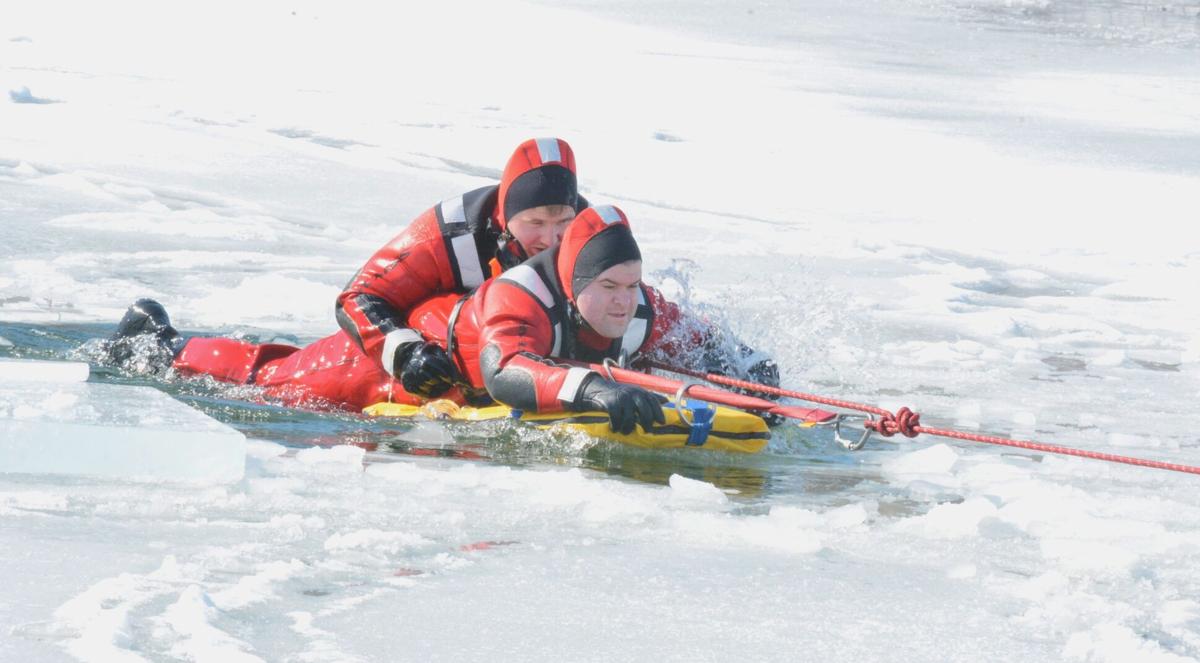 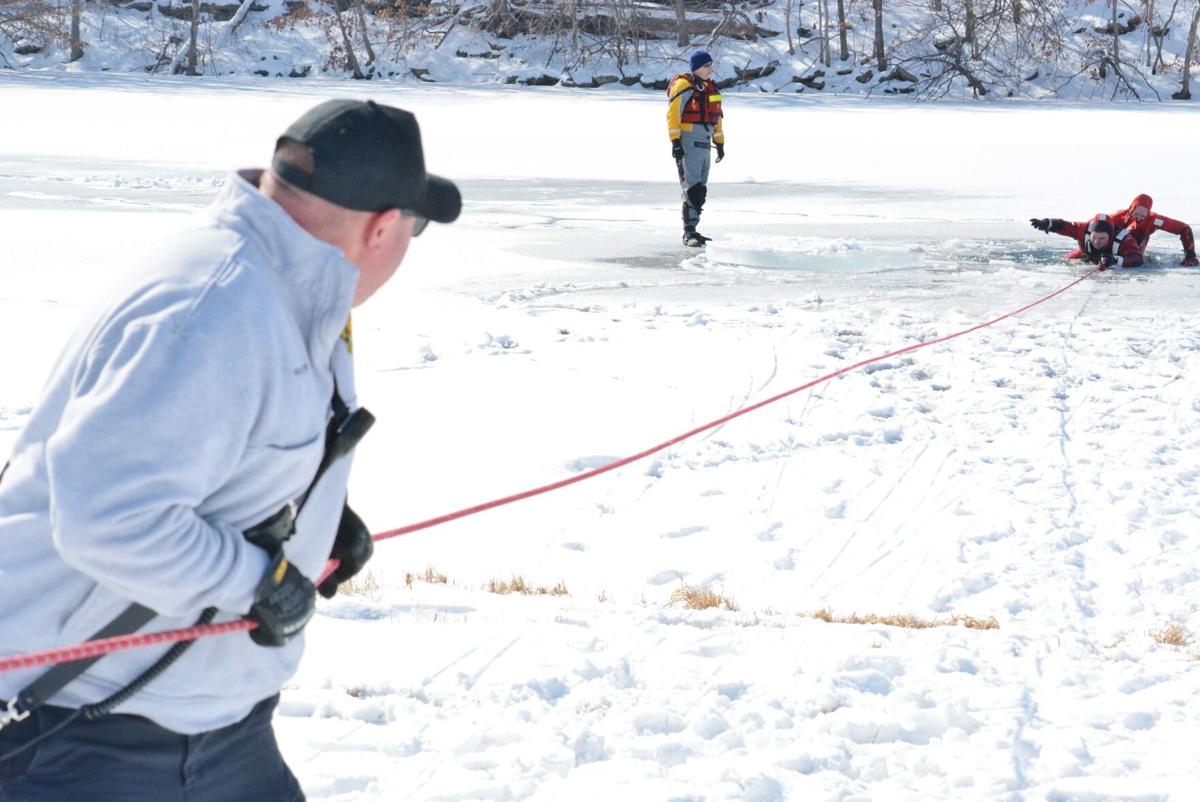 Firefighters grab onto a line to pull rescuer and victim from a hole in the ice at the Lewis-Young Park lake during a cold water rescue training exercise Saturday, Feb. 20, under the watchful eye of firefighter Jon Harris (background) who assisted with the training. 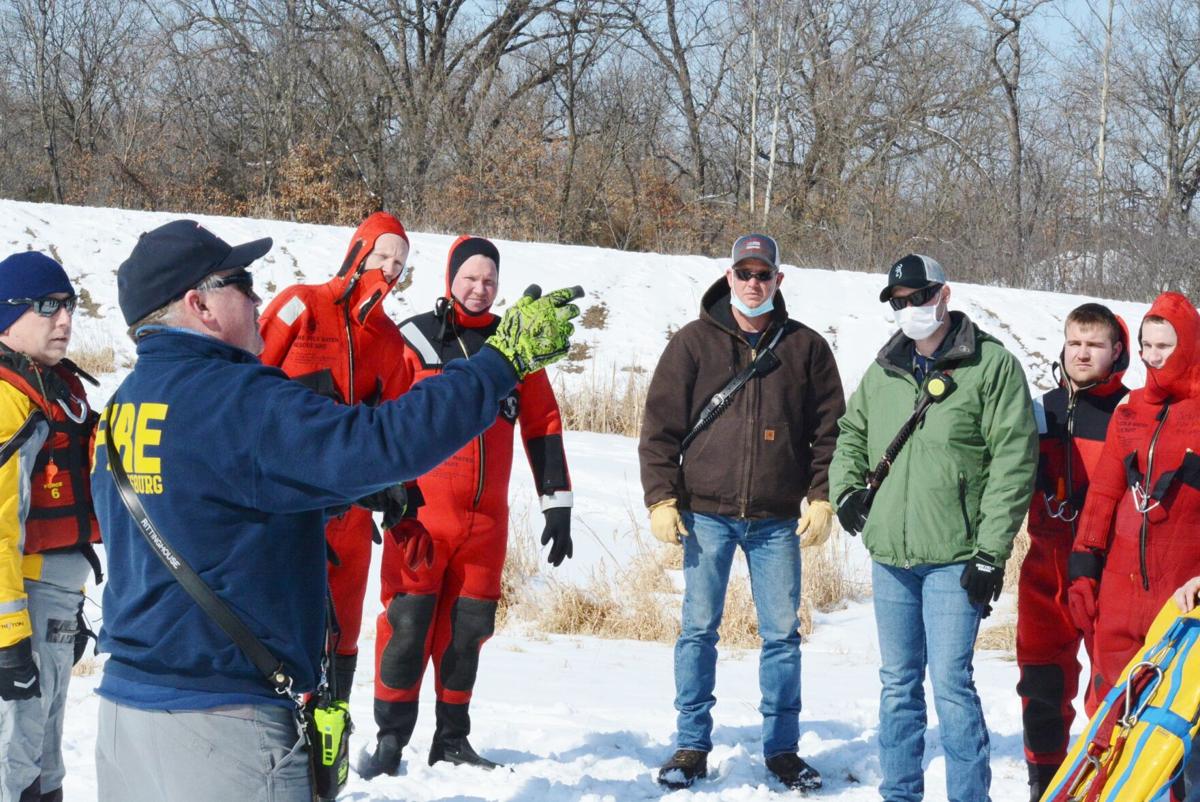 A firefighter drops to his knees as he nears a victim in the icy waters of Lewis-Young Park lake during a cold water rescue training exercise. In the distance, two firefighters practice a rescue using different equipment. 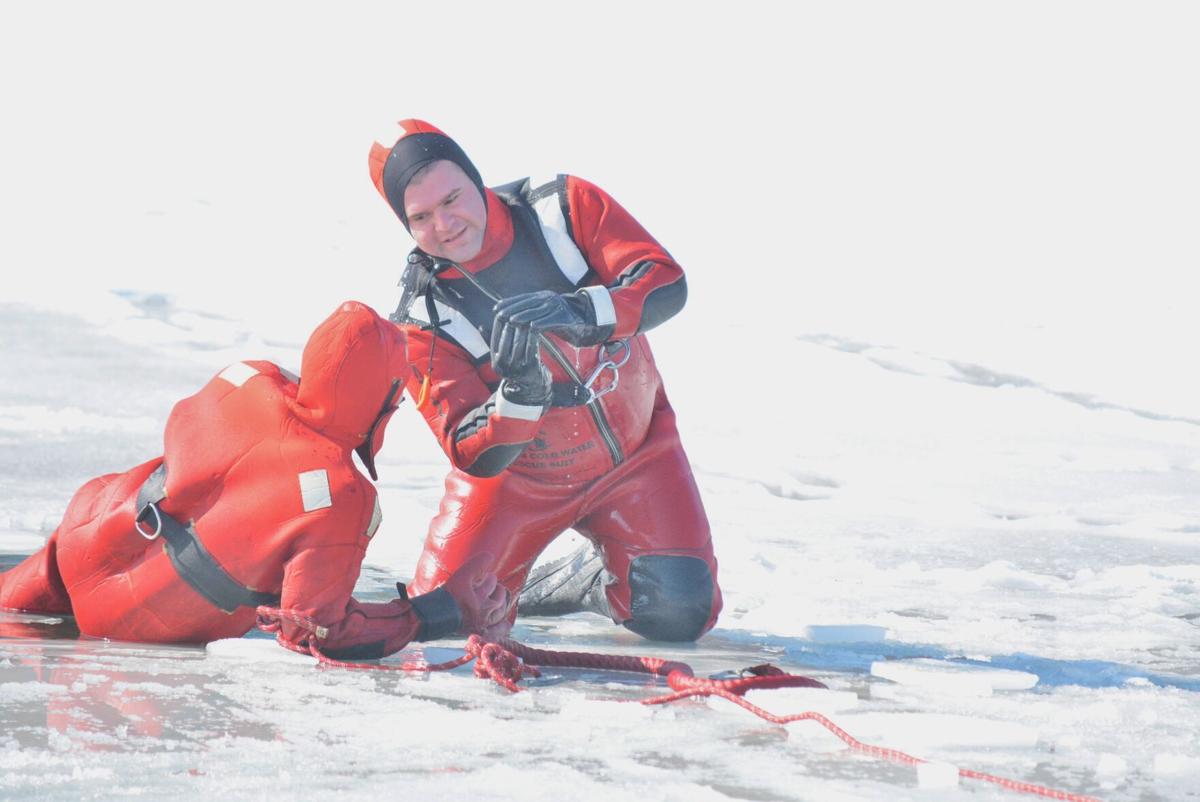 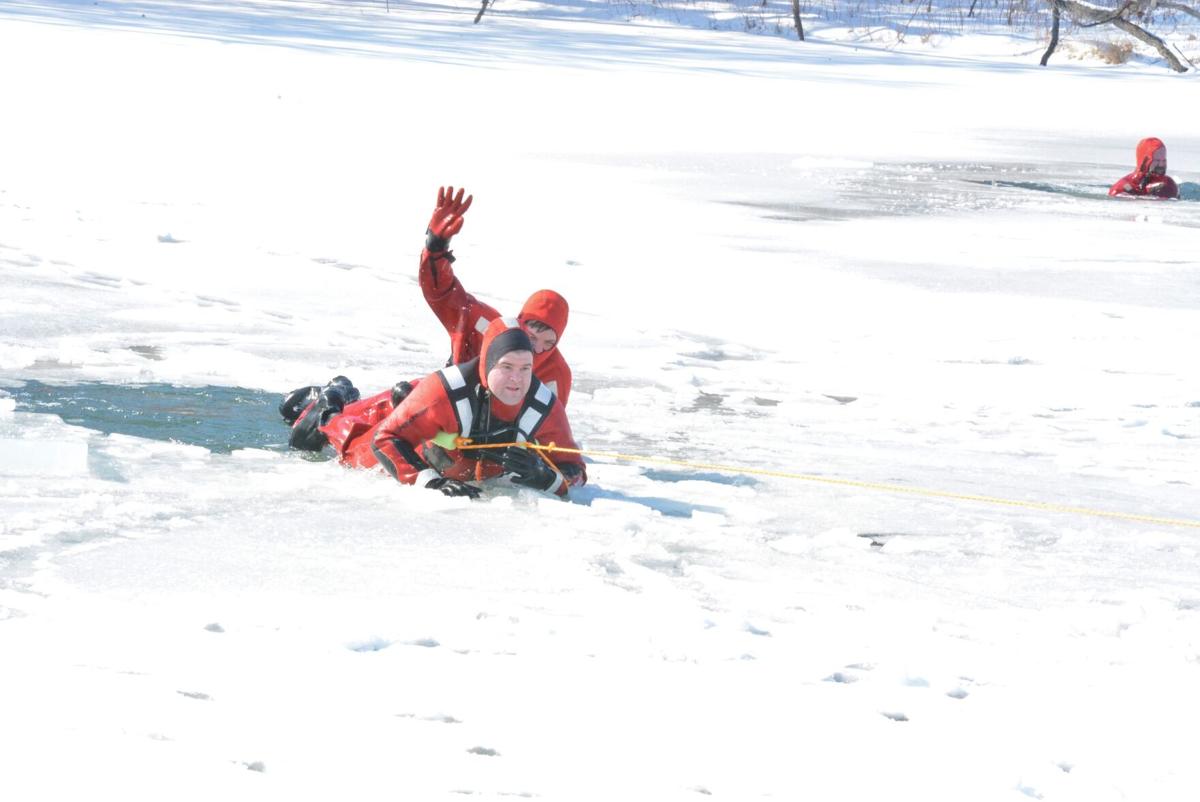 A firefighter raises his hand to signal other firefighters that he and a victim are ready to be pulled out of a hole in the ice at Lewis-Young Park lake. Firefighters from three area departments participated in the cold water rescue training exercise.

Firefighters grab onto a line to pull rescuer and victim from a hole in the ice at the Lewis-Young Park lake during a cold water rescue training exercise Saturday, Feb. 20, under the watchful eye of firefighter Jon Harris (background) who assisted with the training.

A firefighter drops to his knees as he nears a victim in the icy waters of Lewis-Young Park lake during a cold water rescue training exercise. In the distance, two firefighters practice a rescue using different equipment.

A firefighter raises his hand to signal other firefighters that he and a victim are ready to be pulled out of a hole in the ice at Lewis-Young Park lake. Firefighters from three area departments participated in the cold water rescue training exercise.

LOUISBURG — There was no need for firefighters from three departments to engage in idle conversation to break the ice when they gathered at Lewis-Young Park.

That task had already been taken care of.

With temperatures in the low 20s and snow on the ground, the setting seemed ideal for members of the Louisburg Fire Department, Johnson County Fire District No. 2 and Dolan West Dolan Fire Protection District in Freeman, Mo., to practice cold water rescue techniques at the park’s small lake Saturday, Feb. 20.

Louisburg Fire Chief Gerald Rittinghouse arrived at the lake about 7 a.m. to supervise cutting multiple holes in the lake’s ice-packed surface that were large enough to accommodate two people.

Firefighters, clad in red Stearns ice rescue suits, were geared up to practice top-water rescues using a variety of rigging.

The chief said it’s a training exercise that requires a lot of firefighters because it takes a minimum of six to eight firefighters, sometimes more, to rescue a single victim who has fallen through the ice.

Jon Harris, a Johnson County No. 2 firefighter who was assisting with the training, stood on the ice near one of the holes where Louisburg firefighters Alex Dunn and Matt Andrasik were taking turns being the victim and the rescuer.

“On an active rescue scene you might see four guys in suits even though there’s only one victim,” said Harris, who also is a part-time firefighter with the Louisburg department.

Harris said a person could see as many as 10 firefighters on the scene to provide support during an ice rescue operation. The rescue suits are used in eastern Kansas from mid-October to May and sometimes June, because of the water temperature, he said.

“The redundancy of manpower is absolutely warranted any time water is in play because this is one of our most dangerous atmospheres to be in,” Harris said. “In a fire, yeah a lot of things can go wrong, but this is one of those things when you make a mistake out here, in a very short amount of time you are going to be hypothermic to a point where you can’t function well.

“For every rescuer we have to have another rescuer because if something fails or if they get caught we have to have more people to be able to go out into the water to rescue the rescuer,” he said.

Dunn, who has been with the Louisburg department for about two years, was one of four firefighters going through the ice rescue training for the first time.

“For the people in the water, it’s the worst moment in their life,” Dunn said. “We have to stay calm and we have to get them calm. That’s the big thing is keeping our patient calm and getting them out of the water as fast as we can. If you can’t keep your victim calm, it can be really challenging especially in water that doesn’t have much ice on it, it’s hard for them to stay afloat.”

The ice pack on the lake at Lewis-Young Park was an estimated five inches to seven inches thick, less in some locations.

About a half dozen firefighters grabbed onto a rope attached to a boogie board and pulled Dunn and Andrasik out of the hole. At another hole, two firefighters were practicing rescues using a sling device.

“The boogie board is the best option because it keeps the patient from hitting the ice shelf in the rib cage,” Chief Rittinghouse said. “Because any time you’re hypothermic, any time you push tissue, you’re actually damaging the skin and muscles of the body. Getting the victim over the ice shelf is the hardest part.”

When a person falls through the ice, they soon lose the use of their extremities — if they survive the initial drop, he said.

“Once you fall in that cold water, you’re first reaction is to take a deep breath, and if you do that and that ice water goes into your (lungs), you’re done,” Rittinghouse said. “If you survive that part of it, you’re trying to get up on this ice shelf but can’t get out (of the hole). The first thing you lose is the use of your arms and legs, and that happens pretty quickly.”

Combined, veteran firefighters Rittinghouse and Harris have been involved in several ice water rescues in Johnson and Miami counties, including fishermen, farmers breaking pond ice, car accident victims — even rescuing a horse that fell through the ice south of Louisburg.

Rittinghouse said firefighters were practicing with different rigging because each department uses rigging that’s a little different, and firefighters have to know how to use each kind in the event of a mutual aid call. He said the ultimate goal is to get everyone using the same equipment.

The Stearns ice water rescue suits are the same ones the Coast Guard would use in places like Alaska or anywhere a cold water rescue takes place, Rittinghouse said.

They are buoyant to keep the rescuer afloat but could not be used for swimming like a dive suit, he said.

“The suits are awkward because you have so much floatation with you,” Rittinghouse said. “With the water being so cold and dense it squeezes on you so tight, and you’re floating around. You can’t really swim in them.”

As firefighters neared their victims they got down on their hands and knees. Rittinghouse said that technique gives the firefighter better stability on the thin ice. And it serves another function.

“It also puts the rescuer at eye level with the victim,” he said. “That’s very important.”