First National Bank of Louisburg is celebrating its 100th anniversary this year. It is the oldest business in Miami County. 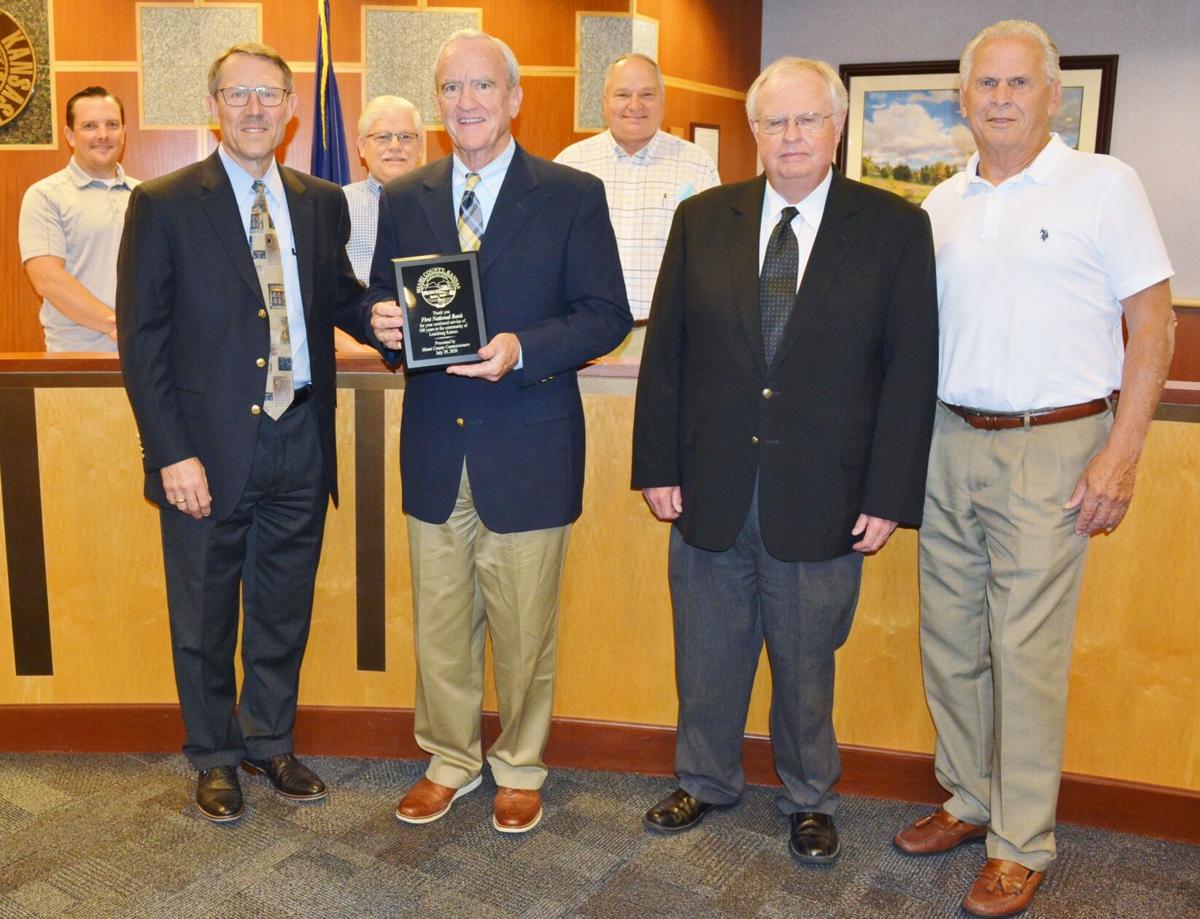 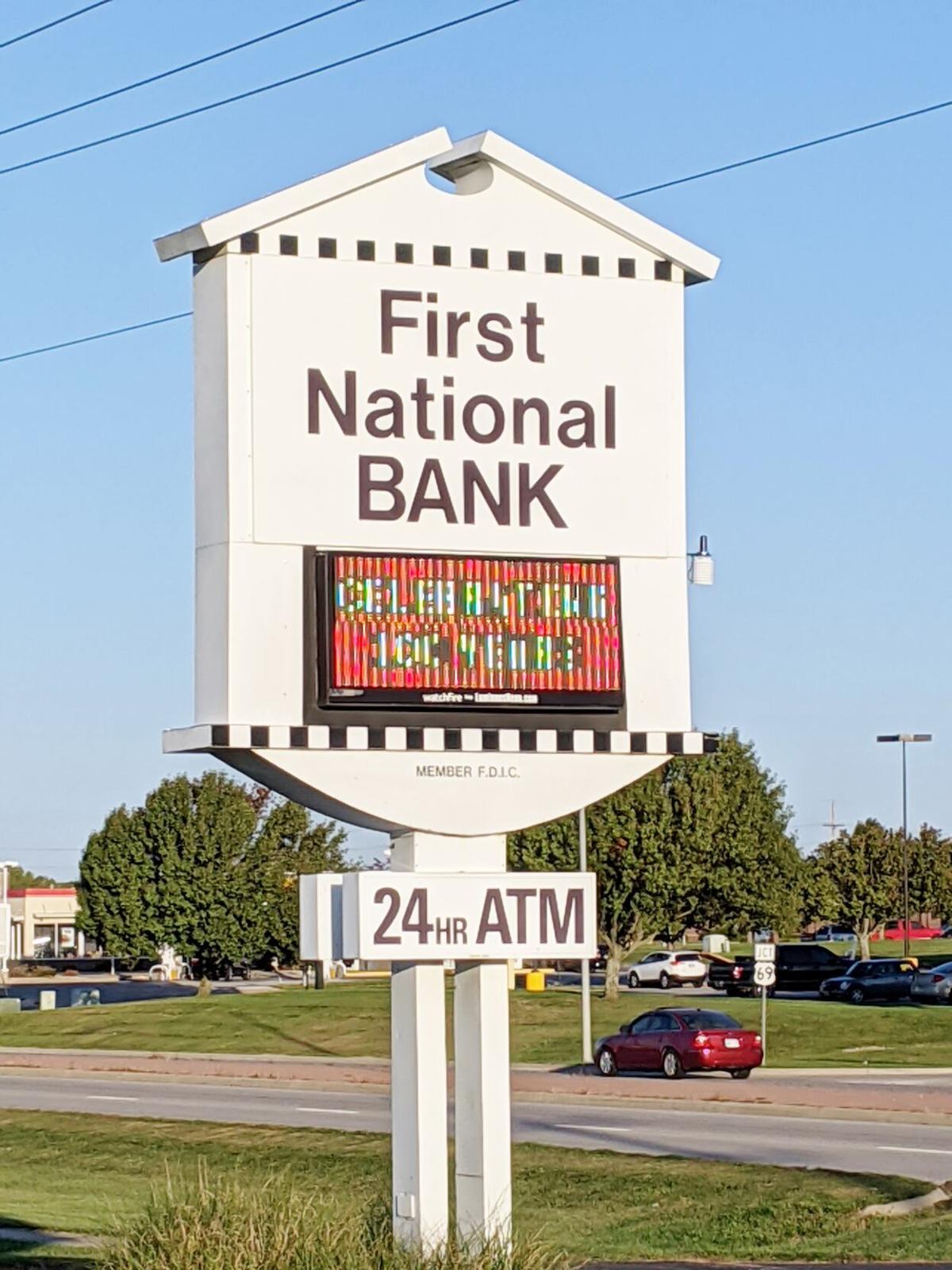 The sign in front of First National Bank of Louisburg thanks the community for its support during the bank’s century of business.

First National Bank of Louisburg is celebrating its 100th anniversary this year. It is the oldest business in Miami County.

The sign in front of First National Bank of Louisburg thanks the community for its support during the bank’s century of business.

LOUISBURG — In July 1920, 18 months after World War I ended, the U.S. economy was sputtering and the Spanish flu pandemic had the world by the throat.

Not exactly ideal conditions to start a bank.

But a group of men scoffed at that notion and founded First National Bank of Louisburg, with prominent farmer Clark Dave Rogers as its first president.

The 35 organizing shareholders, with a total net worth of an estimated $1 million, started the bank with $25,000 in capital. Now, 100 years later, the bank’s current resources are estimated to be more than $145 million, with a total capital account of more than $17 million.

First National is quietly celebrating its continuous operation under the same national charter for one century. The bank had planned to celebrate its 100th anniversary through a variety of community events until another worldwide pandemic — COVID-19 — scrubbed those activities.

The bank continued to grow at a measured pace when other banks were faltering in the Great Depression. First National continues to hold the original charter numbers it was issued by the U.S. Treasury and Office of the Comptroller of the Currency, and the Federal Deposit Insurance Company.

On Sept. 1, 1972, First National’s shareholders sold the bank to the Joseph A. McLiney family and Joe McLiney, at age 26, became the youngest bank president in the United States, according to the Wichita Eagle-Beacon newspaper. McLiney is chairman of the board today.

In 1975, George Karnaze was hired as a cashier and later became the bank’s president in February 1989. Currently, Karnaze is vice chairman of the board.

In August 1985, when the bank reached $24 million in size, Robert “Bob” Nauman was hired as a loan officer that year, and in 2005 he was promoted to bank president. Nauman continues to serve in that position today.

Nauman, sitting behind his desk 6 feet away for social distancing, discussed the history of the bank, including the irony of First National being founded and then celebrating its 100th anniversary in the shadows of the Spanish flu and COVID-19 worldwide pandemics that have to this point bookmarked its history.

The bank president talked about the attrition in the U.S. banking industry since 1920 when First National received its national charter which allows the bank to operate with the word “National” in its name. Only nationally chartered banks are allowed to use that designation.

The banking industry saw a significant reduction from the mid-1980s through the 2000s.

“From year-end 1985 to 2013, 68 percent of all community banks failed or were merged,” Nauman said. “Those were tumultuous years financially for the U.S.”

Nauman talked about how he thinks the bank has continued to grow since the stock market crash of 1929 until today, when thousands of other banks didn’t survive.

“I think one of the things we enjoy in Louisburg is that our economy is not based on a significant player,” Nauman said. “We don’t have a Boeing airline company that feeds 60 percent of our economy. So our economy is built by a lot of small pieces — not one big industry.”

“Unemployment is not an issue for people in Louisburg because of the availability of jobs in Johnson County,” he said. “If you can’t find a job here, 20 minutes (up the road) you can find it. And I think that’s been true for a number of years. I’m guessing you could go back historically and there’s always been that relationship.”

Other key factors are its conservative fiscal approach, and that First National’s current ownership, dating to the 1970s, has shown no interest in selling the bank when offers came their way.

“I think it’s been a result of a continuation of conservative philosophy in banking,” Nauman said. “We’ve tried to be good stewards of the bank and make good decisions. The ownership has been conservative in their approach.

“We’ve wanted the growth of the bank to be gradual and sustainable, and not going out and doing things to try and grow the bank quickly, with the idea that it would be sold,” he said.

Another key factor is the solid work ethic and honesty of the people in the region, he said.

“My experience is that people are honest, they’re hard working and they take care of business. They do what they say they’re going to do,” Nauman said. “So to be a bank in that kind of environment, where else would you want to be? This is an ideal location.”

Today, First National is one of only 117 nationally chartered banks west of the Missouri River and the 41st to mark its 100th anniversary.

First National has weathered other obstacles during its century in business. In November 1977, the bank building at its original Broadway location was destroyed by fire. An electrical fire that originated at the Western Auto Store next to the bank destroyed an entire half block of the downtown business district, according to news accounts at the time.

The bank operated out of its motor bank facility at the northeast corner of Amity and Broadway streets and the former City Hall at 2 S. Broadway until a new bank could be built. In March 1978, a large contingent watched then Kansas Gov. Robert Bennett and Joe McLiney break ground at the bank’s current location at 1201 W. Amity St. The grand opening took place in May 1979.

A wall clock that survived the 1977 fire is still in use at the bank today.

First National is the highest capitalized bank in Miami County as a percentage of assets, Nauman said.

So we’re roughly 18 percent capital with our bank,” Nauman said. “I don’t think there’s another bank in the county, and there aren’t too many banks in Kansas City, that would have that kind of capital.”

First National, which also has branches in Stilwell and Prairie Village, over the past five years has been ranked among the top three banks in the Kansas City metro area by the Kansas City Business Journal in the publication’s small bank category.

“Our bank funded 150 PPE loans to small businesses in our locations here, in Stilwell and Prairie Village — it was roughly $8.6 million worth,” Nauman said. “Over 30 percent of those loans were to minority business owners.”

Nauman said the relationships, working with people one-on-one, is paramount to being a successful community bank.

“It is accessibility, being available to people. There are good community banks here in town and we all have the same community-based approach and feel,” Nauman said. “And I think for us as a bank in particular, it’s continuity.”

Continuity and stability make a real difference for someone who is looking for a banking relationship, Nauman said.

“I think in this day and age, stability, longevity, credibility, reliability are really important and maybe more so today than ever,” he said.

The bank will continue to follow the approach that has made it successful for a century, Nauman said.

“I think if anyone can say they have been in business for 100 years, they’ve done a few things right,” Nauman said. “We will continue to be who we are, do what we do and genuinely take care of our customers in the right way.

“We’re not the hare, we’re the tortoise. And we think there is real value in that,” he said.