The city of Gardner would like to annex its water treatment plant located on Moonlight Road in Miami County. County commissioners are scheduled to continue their discussion of the annexation petition Wednesday, Jan. 8. 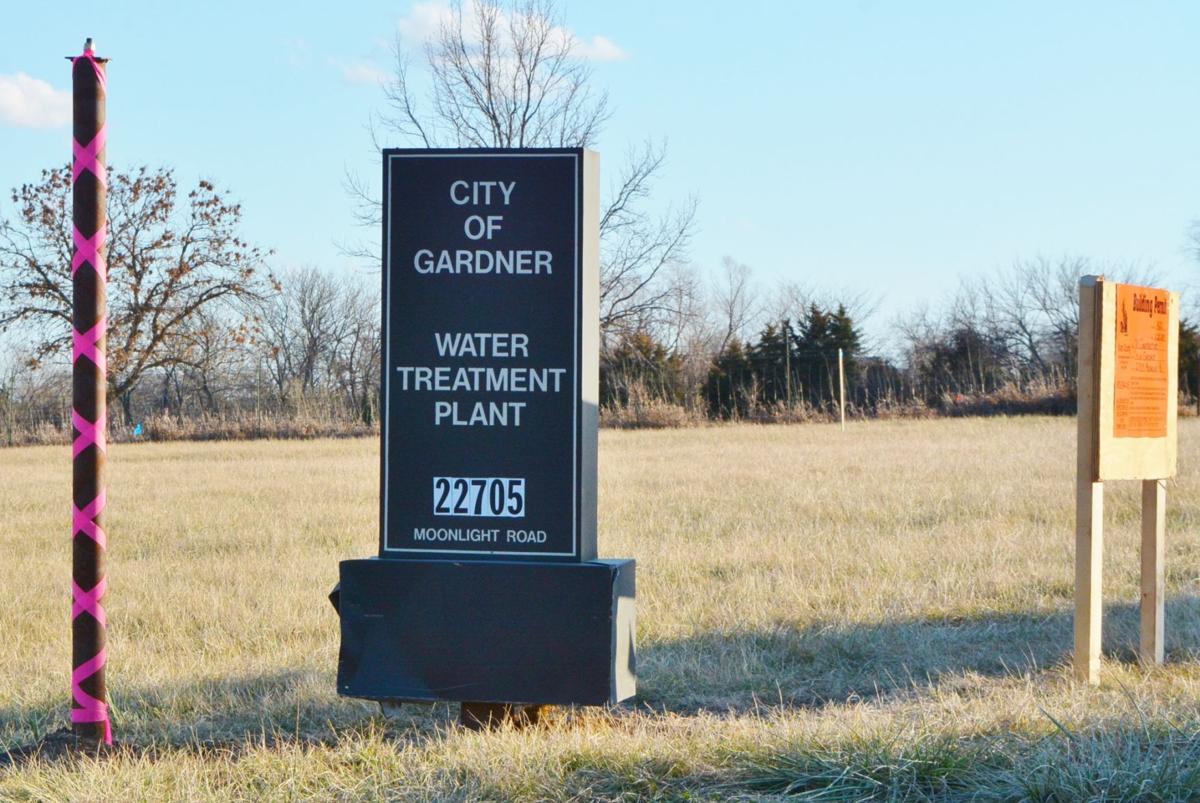 The city of Gardner would like to annex its water treatment plant located on Moonlight Road in Miami County. County commissioners are scheduled to continue their discussion of the annexation petition Wednesday, Jan. 8.

The southern Johnson County community’s population has tripled since the water plant was built in 1997 and has added about 5,000 more residents since the plant was expanded in 2008, according to U.S. Census Bureau estimates.

But commissioners asked some hard questions about Gardner’s petition for an island annexation of about 20 acres at 22705 S. Moonlight Road where the community’s Hillsdale Water Treatment Facility is located in Miami County. The city draws its raw water from the Hillsdale Lake reservoir to serve its estimated 21,871 residents, according to a current U.S. Census estimate.

Gardner purchased the Moonlight Road property in the 1990s and now would like to bring it under the city’s regulatory control as it prepares to expand the plant from the ability to treat 4 million gallons of water per day to 6 million gallons per day.

The ultimate goal is to expand the treatment plant to 12 million gallons per day in the next 25 to 30 years, said Gonzalo Garcia, the city’s utilities director. Garcia said the expansion fits on the existing parcel owned by the city of Gardner.

“The basis and the need for the annexation request by the city principally is to have the site under the city’s regulatory control,” Denk said. “And why that is critically important is because of all the permitting, the processing of those permits and the way we have designed the contract with the contractor is there will be several rounds of regulatory review and approves for this new construction.

“Then as we go forward into the future the same would be true when we do the future expansions up to the 12 million gallons,” he said.

Denk said the city staff anticipates that if the annexation is not approved it would significantly delay the project. He said the city of Gardner staff’s understanding is that Miami County would have to farm out review of the plans to a third party because the county does not have anyone in-house who specializes in construction of water plants.

“You would have to wait for their availability to review the plans, and then there is, obviously, additional significant costs associated with that, and that would significantly disrupt both the schedule and the cost for this project going forward,” Denk said. “So that is why the city has proposed to annex the property.”

On Aug. 19, 2019, the Gardner City Council awarded a contract to the Joint Venture Group of Burns & McDonnell and CAS Contractors, LLC for construction of the proposed plant expansion. The city filed the annex petition with the county Oct. 7, 2019.

Burns & McDonnell’s Mitchell said a design-build process was chosen for the plant to compress the construction schedule.

“The main reason why the city has chosen the design-build process is because they’re really out of water now,” Mitchell said.

“How the design-build process works to compress the schedule is we can overlap the design and construction and do those almost simultaneously,” Mitchell said.

When a portion of the design is completed, construction of that particular element of the project can begin, he said.

“By doing that (design-build overlap), we can compress the schedule for the project by about one year. Our timeline to be able to produce water is spring of 2021,” Mitchell said. “In a conventional process where we complete 100 percent of the design and then have that 100 percent of the design package reviewed, approved and released for construction, it adds about 12 months to the process.”

Denk provided the commission with a list of island annexations that have been approved by the county at various times in the past — including some water and wastewater facilities, as well as other areas such as Louisburg’s annexation of Middle Creek Lake and Osawatomie’s annexation of the city golf course, city lake and city cemetery.

“The city of Gardner is simply asking for similar treatment that has been granted (to other municipalities) in the past,” Denk said.

Commissioner Rob Roberts, the commission’s chairman for 2020, said he has a great deal of respect for Burns & McDonnell and is familiar with the company’s work. But he challenged the notion that bringing in the county’s consulting firm — Institute for Building Technology and Safety (IBTS) — to review the plans would hold up the project.

He also addressed work that had already taken place at the plant.

“How do you folks explain the fact that you began building your project prior to even receiving any oversight from the county and prior to us even having your annexation request?” Roberts asked. “Is it because you just simply don’t want to be under the county’s jurisdiction?”

Denk said the annexation petition was filed before the work began.

“I actually think you had the petition. It was filed back in October,” Denk said to Roberts. “It was, quite frankly, a misunderstanding. Under our understanding of the code, we could pour foundations without pulling permits, and your code enforcement folks took a different interpretation, so that’s the difference. It wasn’t an overt attempt to try to do an end-around your process.”

Several of the commissioners asked if the city of Gardner has ever had a problem with the county in the past that had factored into the annexation request. Garcia said he had been with the city a little more than three years so he could not speak from a historical perspective.

“When we approached the (Miami County) Planning Department, they were very receptive to the Hillsdale (water plant) expansion, so I would not have anticipated any problems,” Garcia said.

Gardner representatives emphasized the need for the expansion.

“I think we’re supportive of making sure everybody has water, and I don’t think the expansion is really in question,” Commissioner Tyler Vaughan said. But “I am not hearing a valid explanation of the annexation.”

Vaughan said the planning department has done very well under the unfortunate circumstance of Gardner not pulling the permit up front by still allowing some limited work without the permit in place.

“You’re a city, you know how permitting works. We’re a county, we know how permitting works,” Vaughan said. “We have conversations with our cities all the time. There’s coordination between us and we work really well together, not waiting until a public hearing to hear from the city (of Gardner) to propose annexing a piece of property when work has already been done.”

Commissioner George Pretz said he had not heard a good explanation of why using the county’s third party consultant IBTS to review the project would cause delays.

During the public comment portion of the meeting, three county residents who live near or across the road from the Gardner water plant raised several points as to why they were opposed to the annexation.

Tom Bach asked what benefit the annexation would provide to the county.

“If you allow the annexation, you (the county) would lose control of that piece of ground forever, and it could damage the surrounding area and the residents of that area and put the county in a detrimental position,” Bach said. “To me this is nothing more and nothing less than a conditional-use permit.

“If we have the ability in this county to work with them on a professional basis, a permitting basis and approval basis, then there should be minimal if any delays in this project.”

Phil Osborn cited activities that had occurred at the plant site such as survey work, without the courtesy of notifying neighboring residents.

Fred Fraley said he lives across the street from the water plant.

“This is an industrial situation placed in a rural setting,” Fraley said. “It was there when I came (eight months ago) but it was back behind the trees — it wasn’t on everybody’s border line and it wasn’t creating the heavier traffic that it’s going to create.”

Fraley said he agreed with commissioners that a conversation between the city and county regarding the proposed annexation and plant expansion should have started a year ago.

“I want to drive down a peaceful quiet street,” Fraley said. “This is a residential neighborhood and this is an industrial use that’s going to be hard to fit in here especially if you let control go to somebody that’s not even in the area.”

Denk reiterated building a water treatment plant is a highly specialized project. He reinforced the need for the design-build process to expedite construction (a Burns & McDonnell engineer would be on site throughout construction).

“If you don’t have that expertise in-house, it is our professional staff’s opinion that it will cause delays,” Denk said. “We’re talking about a $25 million project and there are delay charges in our contract if we’re not meeting our timelines. So it’s real money, and there’s a real process that would be delayed if this annexation petition is not permitted.

“Again, I think all we’re asking for is similar treatment to what’s been done for others in the past,” he said.

Commissioners took no action on the annexation petition and plan to continue their discussion at the Wednesday, Jan. 8, meeting.