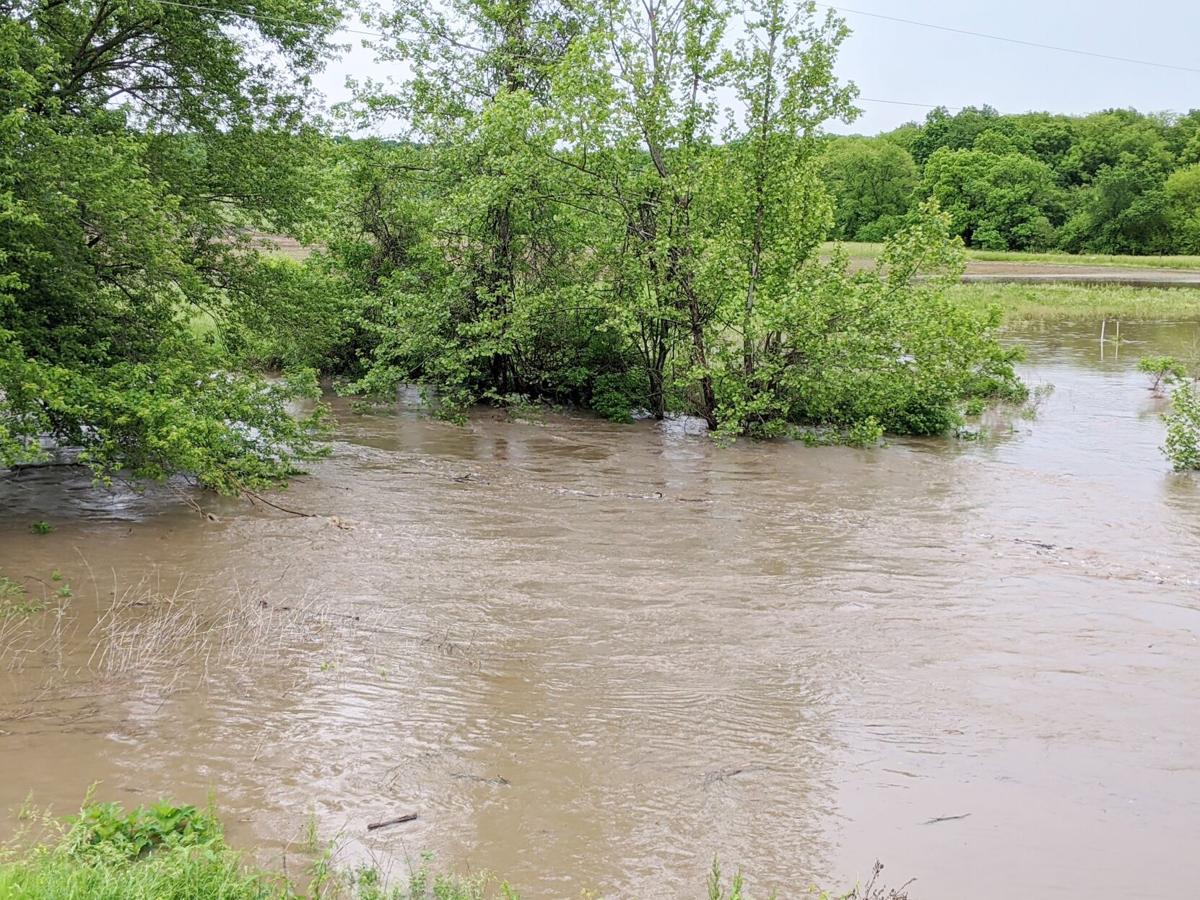 Floodwaters spill from a creek bed west of Louisburg and stretch close to Kansas Highway 68 on Thursday, May 27, as the area received a reported 3 to 4 inches of rain that morning. 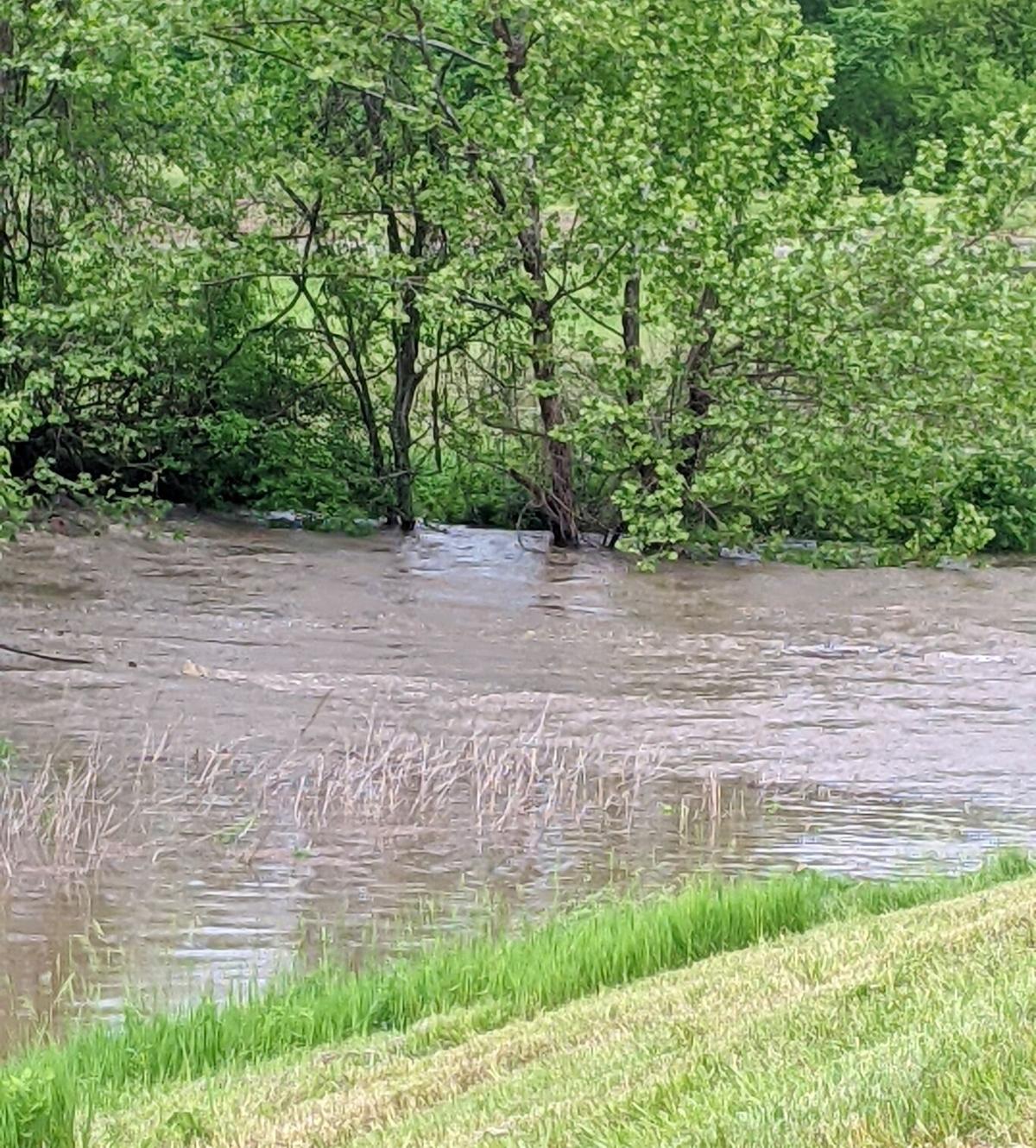 Water escapes from a creek bed and inches close to Kansas Highway 68 west of Louisburg on Thursday, May 27. The storm dumped several inches of rain on the area and contributed to several injury accidents on nearby U.S. Highway 69.

Floodwaters spill from a creek bed west of Louisburg and stretch close to Kansas Highway 68 on Thursday, May 27, as the area received a reported 3 to 4 inches of rain that morning.

Water escapes from a creek bed and inches close to Kansas Highway 68 west of Louisburg on Thursday, May 27. The storm dumped several inches of rain on the area and contributed to several injury accidents on nearby U.S. Highway 69.

HILLSDALE LAKE — A boat rescue during a thunderstorm in the predawn hours kicked off what would prove to be a tumultuous day for Miami County’s first responders.

The Osawatomie Fire Department water rescue team responded to Hillsdale Lake at 3:30 a.m. Thursday, May 27, to find a man and his young pet Rottweiler stranded in a fishing boat on the lake.

“He was talking to his wife and she was relaying to dispatch,” Osawatomie Fire Chief Brian Love said. “By the time we were on the lake looking for him, his phone was dead, which complicated locating him in the dark.”

The rescue team searched for approximately 20 minutes before they found the fishing boat, Love said.

“Eventually he responded to our staff calling out to him and they were able to locate him,” he said. “Our team towed him in to Jayhawk Marina with our dive/rescue boat.”

The chief did not have other details about the boater, but noted he was not from Miami County.

The silver lining is no one was injured and the boater “had his dog with him to keep him company,” Love said.

Some motorists were not as fortunate once the torrential rains started to fall early Thursday, especially on the eastern side of Miami County.

One wreck, an overturned tractor-trailer, blocked the northbound lanes of U.S. 69 south of Louisburg for several hours Thursday morning. Traffic was diverted to Metcalf Road until the highway reopened around 1 p.m., according to a post on the sheriff’s Facebook page.

The Kansas Highway Patrol worked that accident. No injuries were reported.

An estimated 3 to 4 inches of rain fell on Miami County Thursday morning, according to multiple reports.

The deluge caused flash flooding across the county, which the sheriff’s office reported closed the following roadways for a period of time:

The sheriff’s office also responded to two reports of vehicles in the water, two reports of debris in the roadway and two residential/business alarms on Thursday.

The Osawatomie Fire Department’s water rescue team was called out a second time Thursday to assist a motorist whose van had stalled in water across the roadway on “West 335th Street, just west of the railroad tracks (Old Kansas City Road),” Miami County Emergency Management Coordinator Mark Whelan said in an email.

When first responders arrived they found the “occupant was on the roof (of the van),” Whelan said in the email. “The subject was walked out by two water rescue technicians.”

Chief Love said the van was about 30 feet out in bumper-deep water.

The storm also packed strong winds in some sections of the county.

“One citizen sent us photos of damage to their residence where multiple shingles were taken off the house on Osawatomie Road,” Capt. Kelly said.

Water was noted in areas of Louisburg Thursday morning where it almost never floods.

A deep ditch at Rogers Road and Eighth Street was one of those locations, he said.

“It was looking like a pond,” Hufferd said of the ditch. “It was kind of crazy. The good thing is shortly after (the storm) everything filtered out and it was back to normal. So I was glad to see that.”

Though there was no large-scale flooding, Hufferd said he thought water levels he witnessed in parts of the community would be categorized as more than a 100-year event, caused by the heavy rainfall the storm dumped on the community over a short period of time.