Staff members at Osawatomie State Hospital receive their COVID-19 vaccinations during a two-day clinic Jan. 14-15 at the hospital. 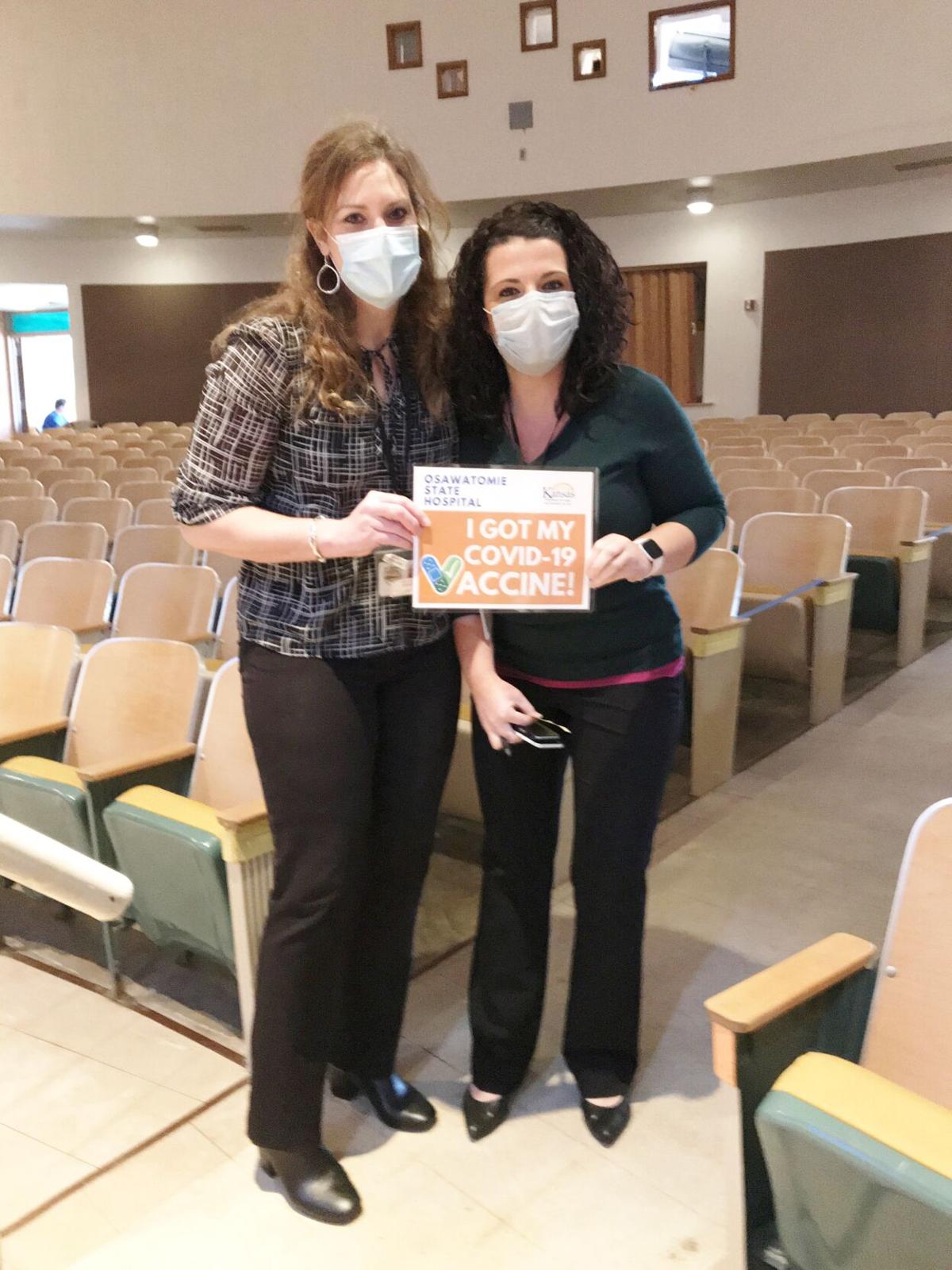 These two staff members were among more than 170 at Osawatomie State Hospital who received their COVID-19 vaccinations during a two-day clinic Jan. 14-15 at the hospital.

Staff members at Osawatomie State Hospital receive their COVID-19 vaccinations during a two-day clinic Jan. 14-15 at the hospital.

These two staff members were among more than 170 at Osawatomie State Hospital who received their COVID-19 vaccinations during a two-day clinic Jan. 14-15 at the hospital.

Hundreds of health care providers and first responders signed up to get the COVID-19 vaccination in the county during the first phase of the state’s vaccination roll out plan.

“We had 800-plus in this first phase who indicated they want the vaccine, so we’re still playing catch up,” said Mark Whelan, emergency management coordinator with the Miami County Sheriff’s Office.

Whelan told the County Commission on Wednesday, Jan. 13, the health department received its second allotment of vaccine that morning — about 400 doses.

Commissioner Tyler Vaughan asked Whelan what steps the county health department was taking to ensure they were getting the right number of doses.

“Kind of a silent concern that not a lot of people are talking about, and this is not a political statement it’s a fact, but I heard a report out of Kansas City that almost 40 percent of first-line workers are opting out of the vaccine,” Vaughan said. “I’m more concerned about making sure the vaccines that we get we’re really able to utilize, because I think there would be a breaking point if you have those 40 or 50 percent opt out, you’re going to take in more than you need.”

Vaughan said he wanted to ensure the county didn’t waste doses which have a shelf life and cannot be refrozen once the doses are thawed out for use.

“I have been doing the same with fire departments and law enforcement agencies in the county. That way we can get the right amount of doses,” Whelan said.

Whelan said, hypothetically, “If the sheriff’s department had 70 employees, we don’t want to get 140 doses if only 75 percent of them want the shot.”

Vaughn asked if there were concerns about the potential for more people to opt out of the second phase.

“We’re spending a lot of time … to make sure we get the right number of doses for Miami County,” Whelan said.

People ages 65 and older, the most vulnerable age group for COVID-19, are among the groups slated for the vaccine in the second phase, which the governor anticipated would kick off by the end of the month.

Chairman Rob Roberts said he thought the 65 and older age group will want the vaccine.

“If it’s any consolation, the number of people 65 (and older) like me, you won’t have any problem using (the doses),” Roberts said. “They’re wanting to have this shot.”

Laurie Davis, executive director of the Life Care Center of Osawatomie, said residents and staff at the long-term care facility were receptive to receiving the vaccine.

“We’ve had an excellent response — almost all of them,” Davis said. “We’ve had a great response as well from families allowing our seniors (to get the vaccine).”

Davis said CVS administered the first dose of the Pfizer vaccine on Dec. 30, and the center expected to receive its second dose Wednesday, Jan. 20. The COVID-19 vaccine requires two doses, three to four weeks apart, depending on which vaccine is used.

Davis reported no one has had an allergic reaction to the shot.

During the commission meeting, Roberts asked Whelan if people who initially declined the shot still had time to opt in.

“I believe if they change their minds later, they can contact the health department and get their names on the list,” Whelan said.

“We’re expecting to receive delivery of two new freezers — one will be going to the health department for storing the vaccine and the other will be installed in the kitchen of the sheriff’s office.”

“If, for some reason, the freezer goes out at the health department we can transfer (the doses) to the sheriff’s office,” he said.

Whelan also thanked everyone who was involved in ensuring Osawatomie State Hospital received its allotments of the vaccine after initially encountering shipment delays.

“Getting an email from (Dr. Lee Norman, secretary of) KDHE is always a shock,” Whelan said. “I wanted to thank Senator Tyson and the commissioners who helped with that the past week. It’s much appreciated, and the state hospital is now getting their vaccine.”

Sandy Clevenger, infection control officer at the state hospital, said the clinic ran smoothly with only a couple of sore arms but no allergic reactions to the vaccine. She said 173 doses were administered by hospital staff during the two-day period. The hospital can store its vaccinations on site.