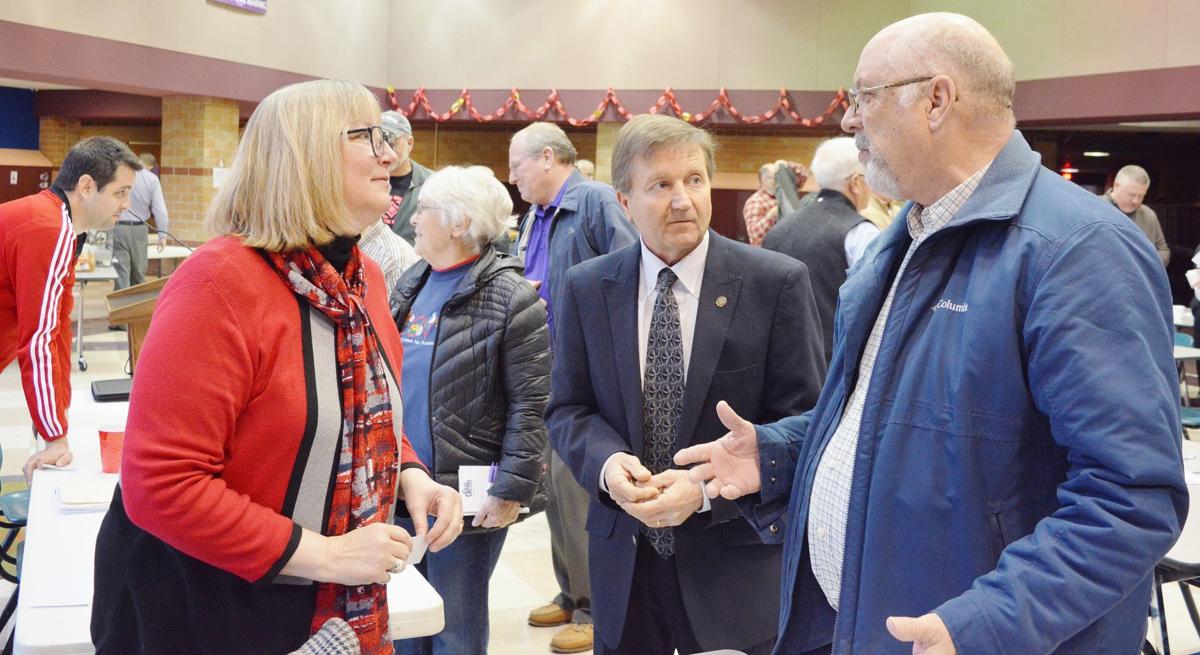 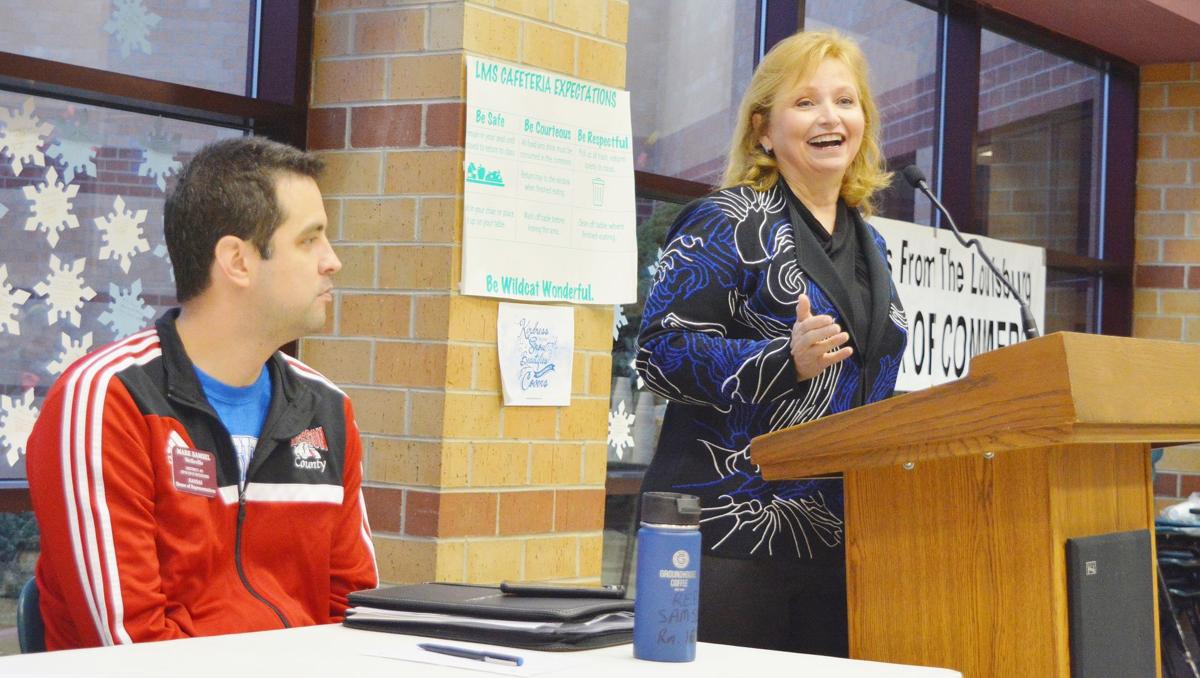 Sen. Caryn Tyson, a Parker Republican, shares a lighter moment with the audience during the legislative breakfast Saturday, Feb. 2, at Louisburg Middle School. Seated next to Tyson is Rep. Mark Samsel, a Wellsville Republican. The next breakfast is 7 a.m. Saturday, Feb. 9, at the Spring Hill Civic Center.

Sen. Caryn Tyson, a Parker Republican, shares a lighter moment with the audience during the legislative breakfast Saturday, Feb. 2, at Louisburg Middle School. Seated next to Tyson is Rep. Mark Samsel, a Wellsville Republican. The next breakfast is 7 a.m. Saturday, Feb. 9, at the Spring Hill Civic Center.

LOUISBURG — Miami County residents will want to keep an eye on Senate Bill 9, which would authorize the transfer of $115 million from the state general fund to the Kansas Public Employees Retirement System during fiscal year 2019.

The bill would correct a decision made in 2016 that reduced the employer contribution by about $96 million, Sen. Molly Baumgardner, a Louisburg Republican, told about 60 people who gathered for the first legislative breakfast of the 2019 session Saturday, Feb. 2, at Louisburg Middle School. Three more breakfasts are scheduled on Saturdays in February in Spring Hill, Paola and Osawatomie.

Baumgardner said the missed payment to KPERS in 2016 has yet to be repaid with interest, as the Legislature promised, raising the total owed to $115 million. If no action is taken this session, another $9 million in interest would accrue in 2019, bringing the total to $124 million.

Baumgardner warned of a point when the state would be paying interest on interest if the unfunded obligation isn’t addressed now.

Sen. Caryn Tyson, a Parker Republican, is one of 18 Republican sponsors of the bill. She told the audience it is important the Legislature addresses the missed KPERS payment this session.

“It’s time for us to take care of this obligation,” she said.

Rep. Jene Vickery, a Louisburg Republican, concurred that it’s important for KPERS to stay on track.

The retirement system serves about 300,000 current and retired public employees, according to reports. Baumgardner said those who think KPERS isn’t that important to the Kansas economy should consider that the figure represents one in every 10 Kansans.

Medicaid, or KanCare, expansion might not be the solution to keeping rural hospitals open, the legislators said.

Sen. Tyson talked about the importance of Kansans using their rural hospitals if they want to see those hospitals stay solvent.

Hospitals in Independence and Fort Scott recently closed, Tyson said. Hospital administrators said Medicaid expansion might have delayed the closings, but ultimately wouldn’t have kept the hospitals from shuttering their doors.

Rep. Mark Samsel, a Wellsville Republican, said keeping local hospitals open and focusing on using local health care services is crucial to rural areas like the counties he serves. He also talked about the importance of the Osawatomie State Hospital to the region.

Reducing property taxes, sales tax (especially on food) and recouping lost taxes from online consumer purchases are all areas the Legislature should focus on this session.

“We are losing people across the state line (because of high taxes),” Tyson said.

Vickery said instead of raising taxes, the focus needs to be not spending more than the state can afford.

Samsel talked about the need to expand broadband, particularly in rural areas

“Broadband is a part of the infrastructure, much like highways,” Samsel said. “Broadband is essential for rural areas.”

“Finding a way to fund K-68 should be a top priority,” Vickery said.

Legislators also talked about a need to address an increase in suicide rates in Kansas and the growing number of children in foster care.

Tyson distributed information from the Kansas Legislative Research Department that showed education accounts for 57.1 percent of the state budget, more than twice as much as the next highest category, with human services accounting for 27.6 percent of the budget.

The next legislative breakfast is at 7 a.m. Saturday, Feb. 9, in the Spring Hill Civic Center.

The next legislative breakfast is scheduled for 7 a.m. Saturday, Feb. 9, in the Spring Hill Civic Center.