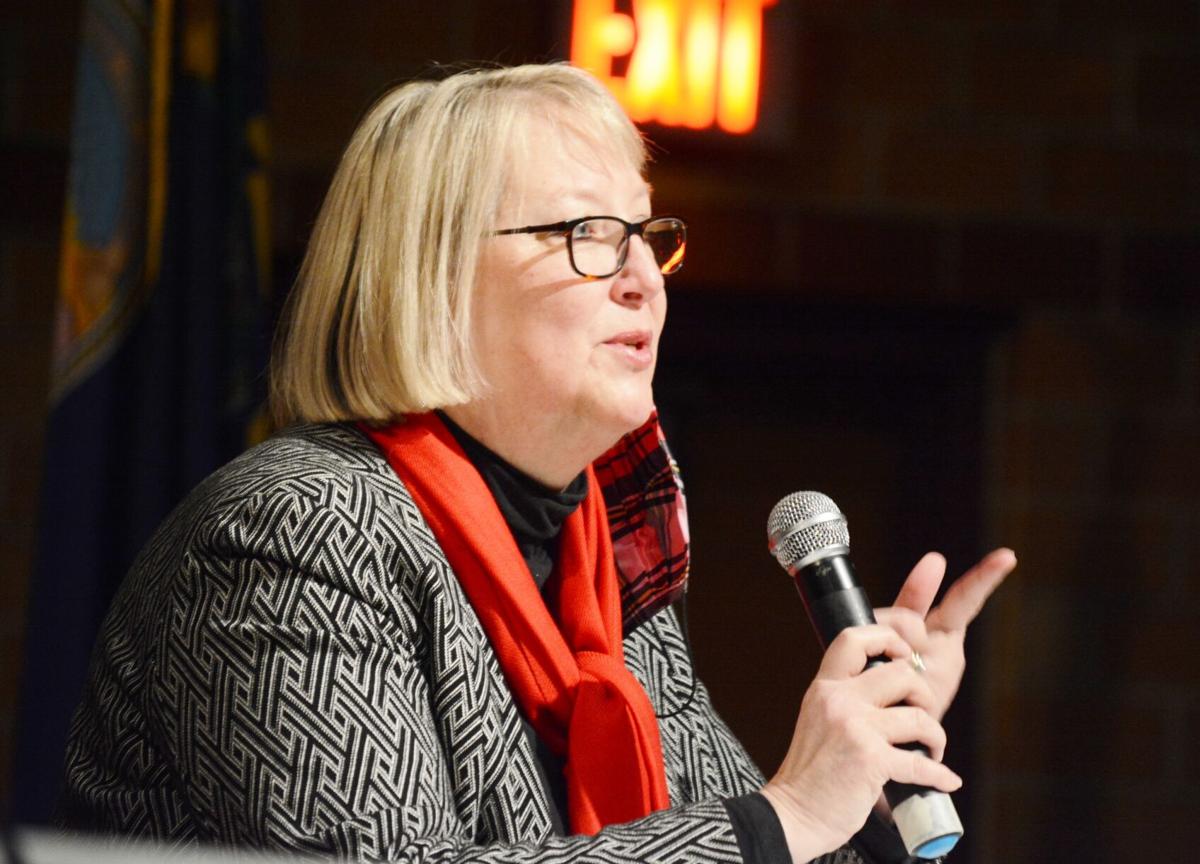 State Sen. Molly Baumgardner, a Louisburg Republican, talks about some of the legislation she is working on during the Louisburg legislative coffee Saturday, Feb. 6, in the middle school auditorium. 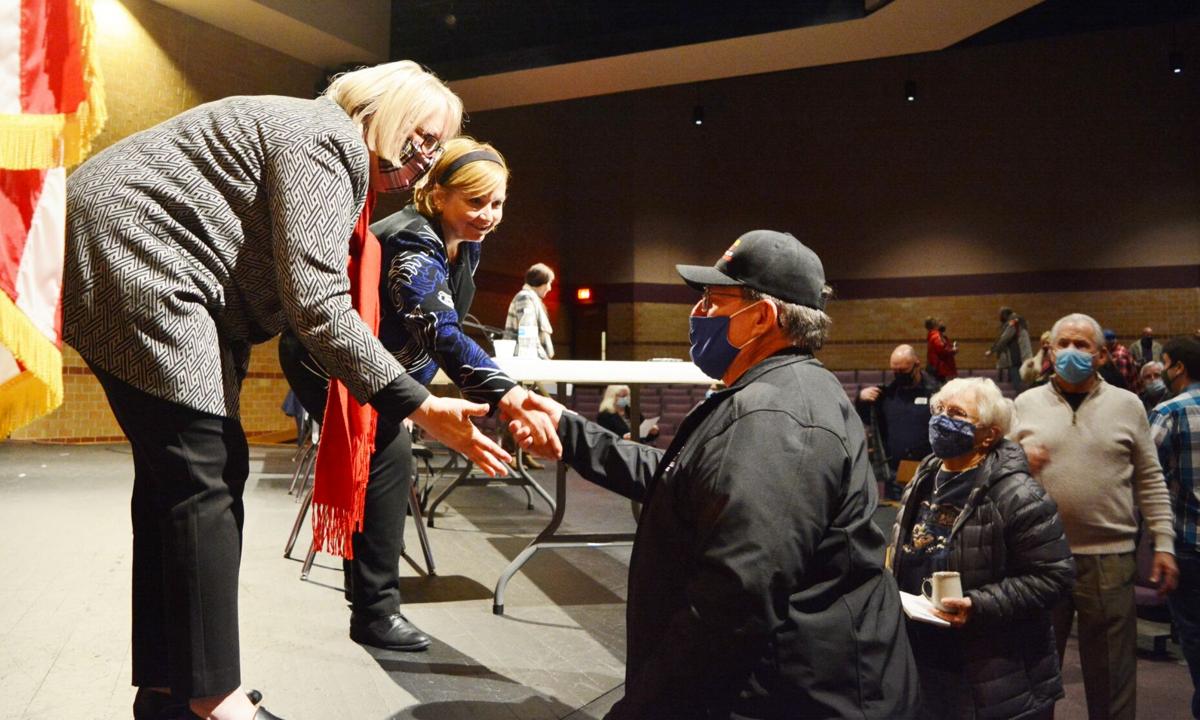 Constituents line up to shake hands with state Sens. Molly Baumgardner and Caryn Tyson after a legislative coffee Saturday, Feb. 6, in Louisburg. Rep. Samantha Poetter (background) talks with a constituent. 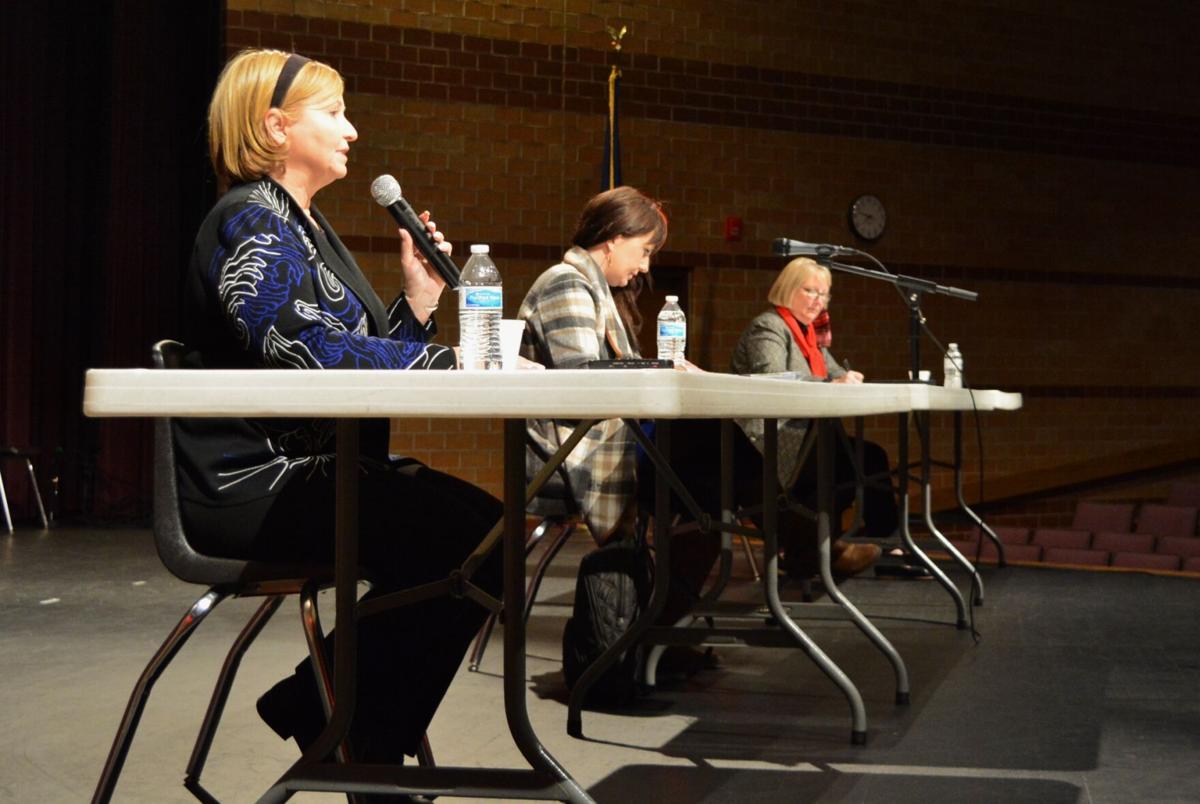 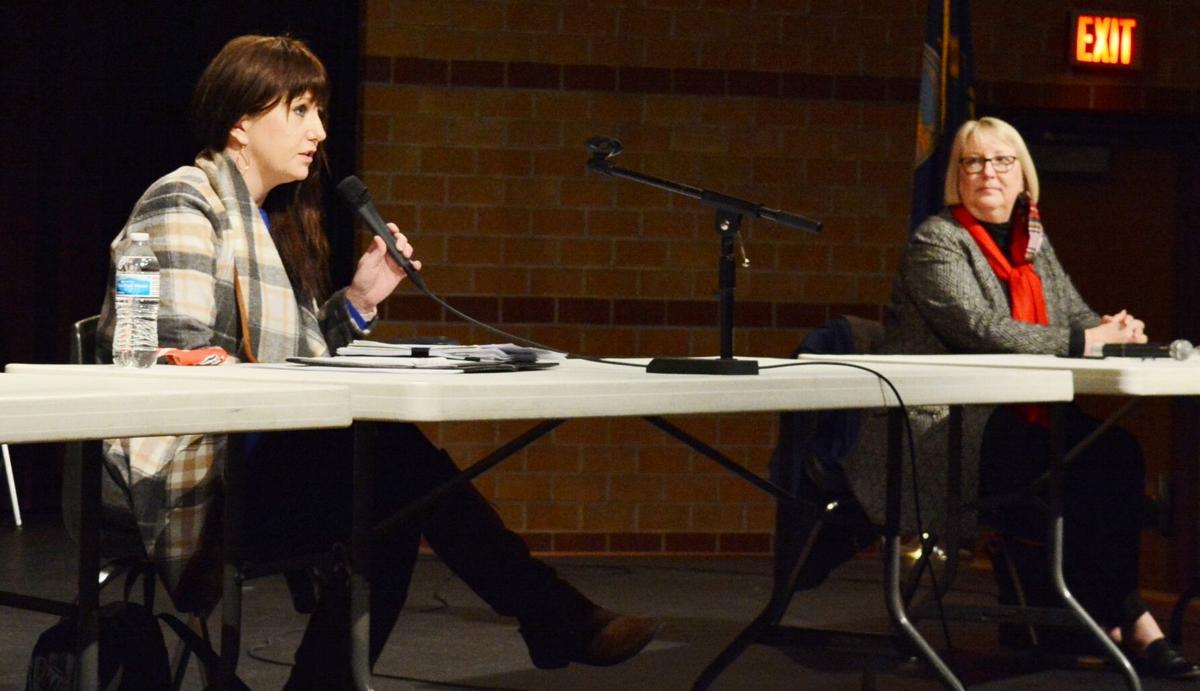 Rep. Samantha Poetter, a Paola Republican, talks about her committee assignments during a legislative coffee hosted by the Louisburg Chamber of Commerce on Saturday, Feb. 6.

State Sen. Molly Baumgardner, a Louisburg Republican, talks about some of the legislation she is working on during the Louisburg legislative coffee Saturday, Feb. 6, in the middle school auditorium.

Constituents line up to shake hands with state Sens. Molly Baumgardner and Caryn Tyson after a legislative coffee Saturday, Feb. 6, in Louisburg. Rep. Samantha Poetter (background) talks with a constituent.

Rep. Samantha Poetter, a Paola Republican, talks about her committee assignments during a legislative coffee hosted by the Louisburg Chamber of Commerce on Saturday, Feb. 6.

LOUISBURG — A property tax transparency bill, SB 13, has been approved in the Kansas Senate by an overwhelming 34-1 vote and is now in the House Committee on Taxation.

The bill was a key topic of discussion during a legislative coffee hosted by the Louisburg Chamber of Commerce on Saturday, Feb. 6, in the middle school auditorium.

Republican Sens. Caryn Tyson of Parker and Molly Baumgardner of Louisburg are two of the cosponsors of the bill. They joined Rep. Samantha Poetter, a Republican from Paola, at the coffee attended by about 40 people, with another nine people watching online.

“We have a shell game with our property taxes,” Tyson said. “The valuations go up, and then the governing body may or may not increase the mill levy. They may even lower it. But we’re writing a bigger check.”

One portion of the multi-part bill would establish notice and public hearing requirements prior to a governing body voting to exceed its revenue neutral rate for property tax purposes.

“So what this transparency bill does is the governing body would have to vote if they are going to increase your property taxes that year,” Tyson said. “It would just be transparent. It wouldn’t be an automatic increase because of the valuations.”

Tyson said the bill is modeled after several states, including Utah, Tennessee, Minnesota and others. Some states have had the measure in place for more than three decades, the senator pointed out.

“It’s a program that works,” she said. “We are about taxation with representation.”

Tyson said a notice that will be mailed to each property owner lets them know how much in property tax they would be paying to the county or other taxing entity. Schools and colleges are exempt from the bill.

In addition to the property tax amount, the notice will include the time and date of what is being referred to as a truth in taxation hearing.

“So that way the public can go and comment at the meeting,” Tyson said. “They (local governing body) have to vote at that meeting but they can take input prior to that meeting too. It’s very flexible and it has worked in other states.”

Tyson estimated the cost of the notices would be about $1 per property owner.

“There are people who are being taxed out of their homes, literally,” she said.

Baumgardner and Poetter also expressed their support for the bill. Rep. Mark Samsel, a Wellsville Republican, was unable to attend Saturday.

Poetter said the bill is scheduled to be worked in the House tax committee the week of Feb. 8. She said there have been some suggested amendments to the bill.

“My goal is that we don’t have any amendments that will end up killing the bill because in my opinion this is extremely important,” Poetter said. “That notice that’s sent to you has a breakdown specifically of where each percentage is going and it gives you a dollar amount that’s going to the county, libraries or whatever (taxing entity) it may be.

“While initially, yes it’s a mailing that will cost a little more, but in my opinion it’s worth your ability to go and talk to commissioners and stay there and watch how they vote because you need to know how they stand on issues that our extremely important to you,” Poetter said.

Poetter also talked about an option to receive the notice by email.

“My guess is in the next five years it will cut down on mailing costs,” she said.

“When the governor came out with her budget, it’s probably a good thing that her state of the state address was (made) alone in a room with a camera,” Baumgardner said. “Because I imagine if the House and the Senate would have been convened together as was the tradition pre-COVID to hear that, it would not have been well received.

“When as governor in March you essentially shut down our state,” Baumgardner said. “Think of all the jobs that have been lost. Think of the businesses that have been closed.”

The senator told the audience if they venture outside of the county they would see building after building closed as a result of the shutdown that the governor imposed.

“So at the time when folks are out of jobs — they’re still not getting their unemployment payments — that is not the time to burden them,” Baumgardner said. “We already are, I believe, in the top five as far as the highest taxing state in the United States. That’s not a list I’m proud for us to be on.”

Baumgardner doesn’t want to see that tax burden put on the shoulders of the Kansas Public Employees Retirement System (KPERS).

“We have worked long and hard — it has been almost 10 years the Legislature has worked to undue, to unravel the damage that was done by the Sebelius administration and the Parkinson administration because what they did year in and year out to make their budgets, they didn’t make the KPERS payment.”

“The fact of the matter is one out of every 10 in our state population is actively contributing to KPERS or receiving KPERS,” Baumgardner said. “And so to use that as our ATM and to re-amortize it is not a good practice because we will not be able to dig out of that hole.”

The senator said now is not the time to backtrack, and the state must keep KPERS solvent.

“It’s time to do what we do at home, and that is to tighten our belt and wait until things settle down,” Baumgardner said. “We have to focus on what we need in our state, not just our wants.”

Poetter said the majority of the time she is against any type of tax increase and especially this year with businesses shutting down and people struggling to pay property tax bills.

“We need to make sure we get our businesses back going, get people back working and tighten the belt where we need to and not raise taxes on people that are hurting right now,” Poetter said.

Tyson noted the state can ill afford to legislate from the bench or via executive orders.

“The Legislature is going to have to step up. We’re going to have to see some intestinal fortitude to stand up, not just to the judicial but the administrative overreach and the federal overreach,” Tyson said, to applause from the audience.

For those unable to attend or watch Saturday’s coffee in Louisburg, Osawatomie Chamber of Commerce will host its legislative coffee from 7:30 to 9 a.m. Saturday, Feb. 13, in the Osawatomie High School auditorium at 1200 Trojan Drive in Osawatomie.