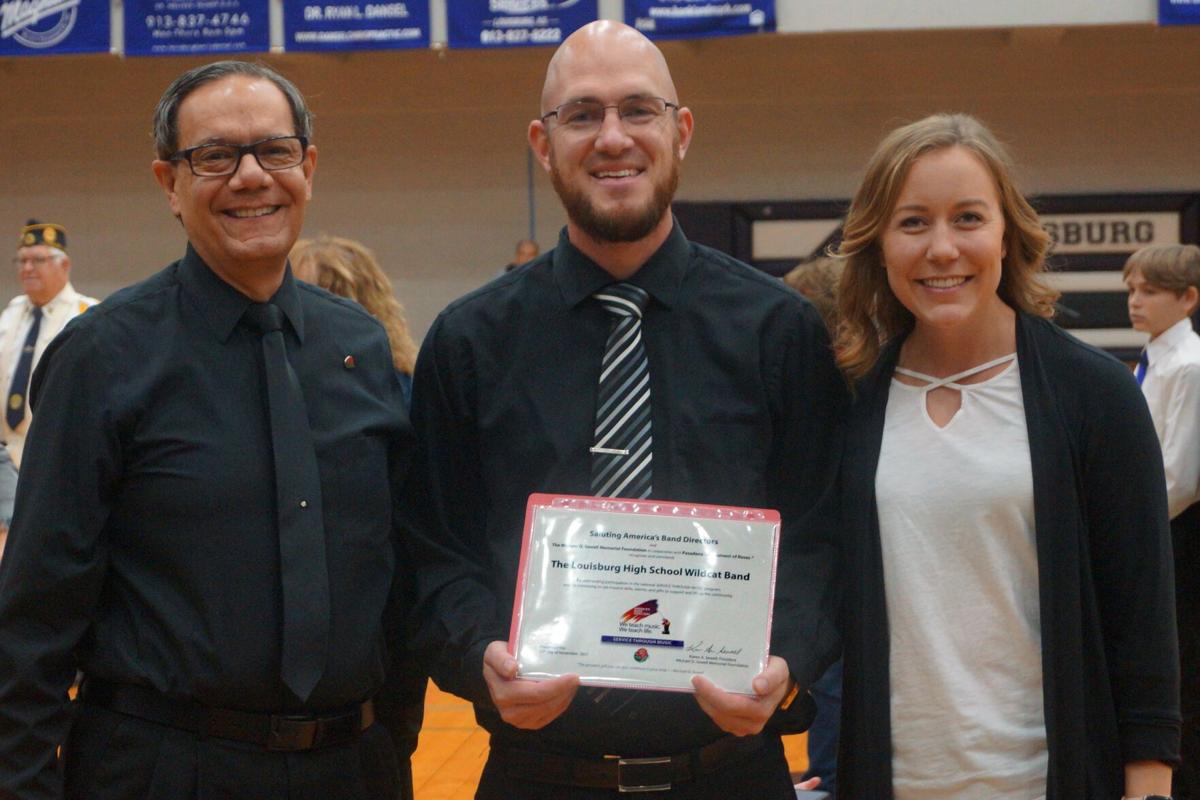 John Cisetti (from left), Zeb Tiedeman and Jessica Brummel have been selected to perform in the Band Directors Marching Band in the Jan. 1 Pasadena Rose Parade. Tiedeman and Brummel are director and assistant director, respectively, of the Louisburg Wildcat Marching Band, and Cisetti retired in May 2019 after serving as Louisburg band director for 40 years. 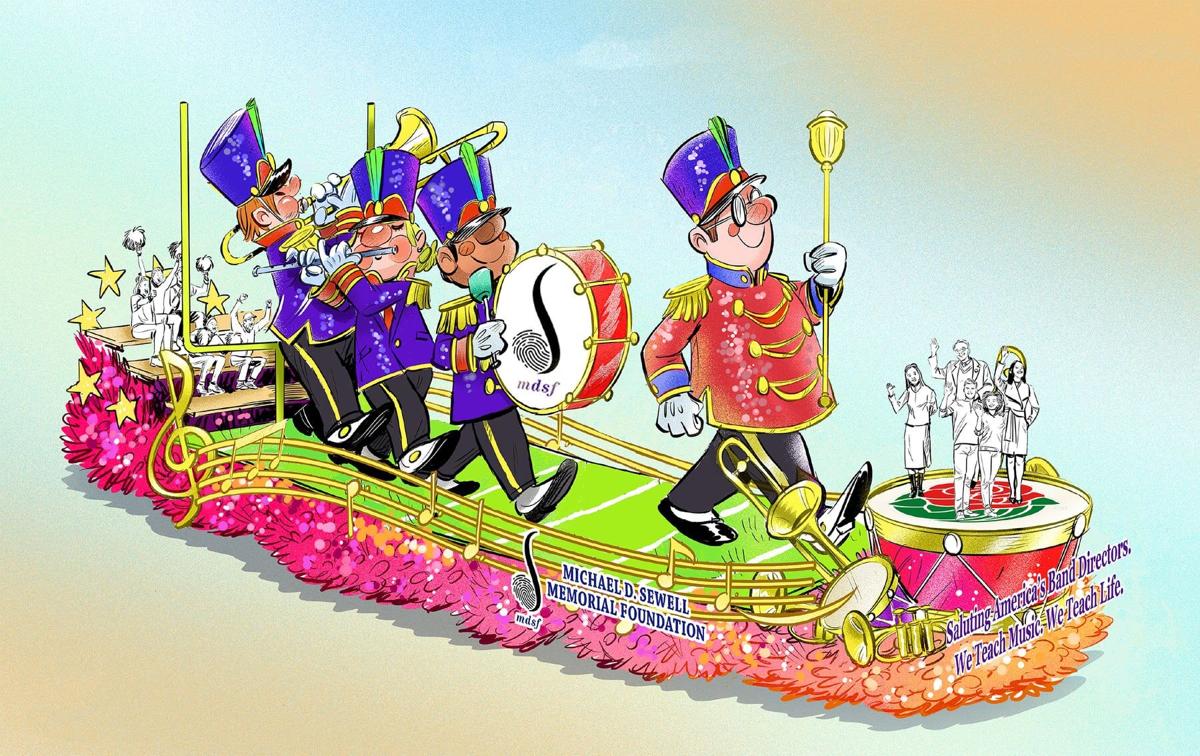 This artist rendering is of the float that will accompany the Band Directors Marching Band in the Jan. 1 Pasadena Rose Parade. Three Louisburg band directors have been selected to perform with 270 band directors from across the country who will march in the parade.

John Cisetti (from left), Zeb Tiedeman and Jessica Brummel have been selected to perform in the Band Directors Marching Band in the Jan. 1 Pasadena Rose Parade. Tiedeman and Brummel are director and assistant director, respectively, of the Louisburg Wildcat Marching Band, and Cisetti retired in May 2019 after serving as Louisburg band director for 40 years.

This artist rendering is of the float that will accompany the Band Directors Marching Band in the Jan. 1 Pasadena Rose Parade. Three Louisburg band directors have been selected to perform with 270 band directors from across the country who will march in the parade.

LOUISBURG – Three Louisburg band directors will march into the New Year in style.

“When I heard that this was being planned, there was no doubt that I wanted to be a part of it,” Cisetti said. “The Band Directors Marching Band is a great way to highlight the work of my colleagues across the country and across the years.”

Tiedeman described the band directors band as an extremely unique opportunity that he couldn't pass up.

“Out of the 270 band directors, I know six of them,” Tiedeman said. “It will be great to connect with old friends and make new ones. I am extremely curious about what a band full of band directors from around the country is going to sound and look like.”

Brummel said she is excited about the once-in-a-lifetime opportunity to be part of the very first Band Directors Marching Band in the Rose Parade.

“I grew up in the Louisburg Band program, but I wasn't a part of their experience in the Rose Parade in 2018,” Brummel, a 2014 LHS graduate, said in an email. “Now that I'm teaching in the district, it will be awesome to have the same opportunity that so many of my students have had!”

Cisetti, who retired in May 2019 after serving 40 years as Louisburg's band director, said he is also looking forward to experiencing in 2022 what his students did in the Rose Parade.

“Four years ago I marched on the side with my students,” he said. “Now I will be playing in the band. It will be great to experience it as my students did.”

Cisetti said he is looking forward to meeting and performing with hundreds of outstanding band directors from across the country.

“Marching in the Rose Parade, of course, is a ‘Top Ten’ lifetime experience,” he said.

The Louisburg representatives are looking forward to the other experiences the trip will present.

Tiedeman said he is also looking forward to representing the Louisburg band program.

“I am exceptionally proud to represent our Louisburg Wildcat Band program,” he said. “It has been my greatest professional challenge to take on the program that Mr. John Cisetti left me. I believe we are right on track to doing great things. I will wear my Wildcat Band gear with pride and make our students proud.”

And then there are the colorful floats that capture the attention of thousands of spectators along the route as well as those watching on their TV sets at home.

“I'm most looking forward to touring the float factory,” Brummel said. “My students that have participated in the Rose Parade in 2018 said that that was their favorite part of their trip.”

The band directors band will accompany a colorful, animated float along the parade route.

“The Rose Parade is known for the beautiful floats covered with flowers,” Cisetti said. “Our unit has a float that features a band director leading a group of students.”

The Band Directors Marching Band and the band director float are entered as one unit, Cisetti said.

Cisetti said the directors marching band was originally scheduled to perform in the 2021 parade. But when the parade was cancelled amid the pandemic, the “Saluting America’s Band Directors" project was extended to 2022.

Band directors from across the country will march under the theme, “America’s band directors: We teach music. We teach life,” according to a Rose Parade press release.

Cisetti will play a marching French horn, also known as a mellophone. Tiedeman will play sousaphone and Brummel will play flute. All three have been practicing and memorizing the music.

Cisetti said the selection the band will play on TV is “Seventy-Six Trombones” from “The Music Man.” The arrangement the band will use was custom-written specifically for the band of directors to perform at this occasion.

In addition to practicing and memorizing music, all three Louisburg directors have been conditioning for the grueling 5.5-mile route.

“The Rose Parade is one of the longest in the world,” Cisetti said. “For local perspective, that's like marching from Louisburg High School to the Louisburg Cider Mill. It takes a lot of conditioning to be ready for a parade like that."

Cisetti said when the Louisburg band was preparing for the parade, every student received a Vivofit fitness watch donated by Garmin. Students tracked their steps with a goal of 10,000 per day, he said.

“When I found out, two years ago, that I would be marching in this parade, I got out my Vivofit and started walking every day with a goal of averaging five and a half miles per day,” Cisetti said. “For self-motivation, I kept track of a running total of my steps and my mileage. During the past two years, I have walked over eight and a half million steps totaling more than 4,000 miles.”

Tiedeman will be one of 27 sousaphone players in the band directors band.

“The tuba has been my primary instrument for 22 years,” Tiedeman said. “The weight of the sousaphone is approximately 35 to 40 pounds. It will be a challenge and a great accomplishment to march in the 5.5-mile Rose Parade.”

Most band directors are rarely off their feet when they are on the job, Tiedeman said.

“Normally, I lose weight during marching band season because of how demanding it is,” he said. “I have been going to gym classes twice a week to build strength for carrying the sousaphone for the duration of the parade.”

Brummel also has been putting in the miles.

“I've been walking/running for 3 to 4 miles about four times a week since Thanksgiving,” she said. “I've slacked a bit on my training the past two weeks because of Louisburg band concerts, however, moving percussion equipment and chairs and stands for concerts has been somewhat making up for it!”

Cisetti said he is looking forward to the band coming together for the first time.

“The interesting thing is that all 270 band directors are conditioning and practicing on their own,” he said. “I am looking forward to our first rehearsal in California where all of this energy will come together. It has been my experience that band members draw strength from each other. ‘The Band Makes Me Strong’ was our motto in Louisburg. Together we can do things that are impossible alone.”