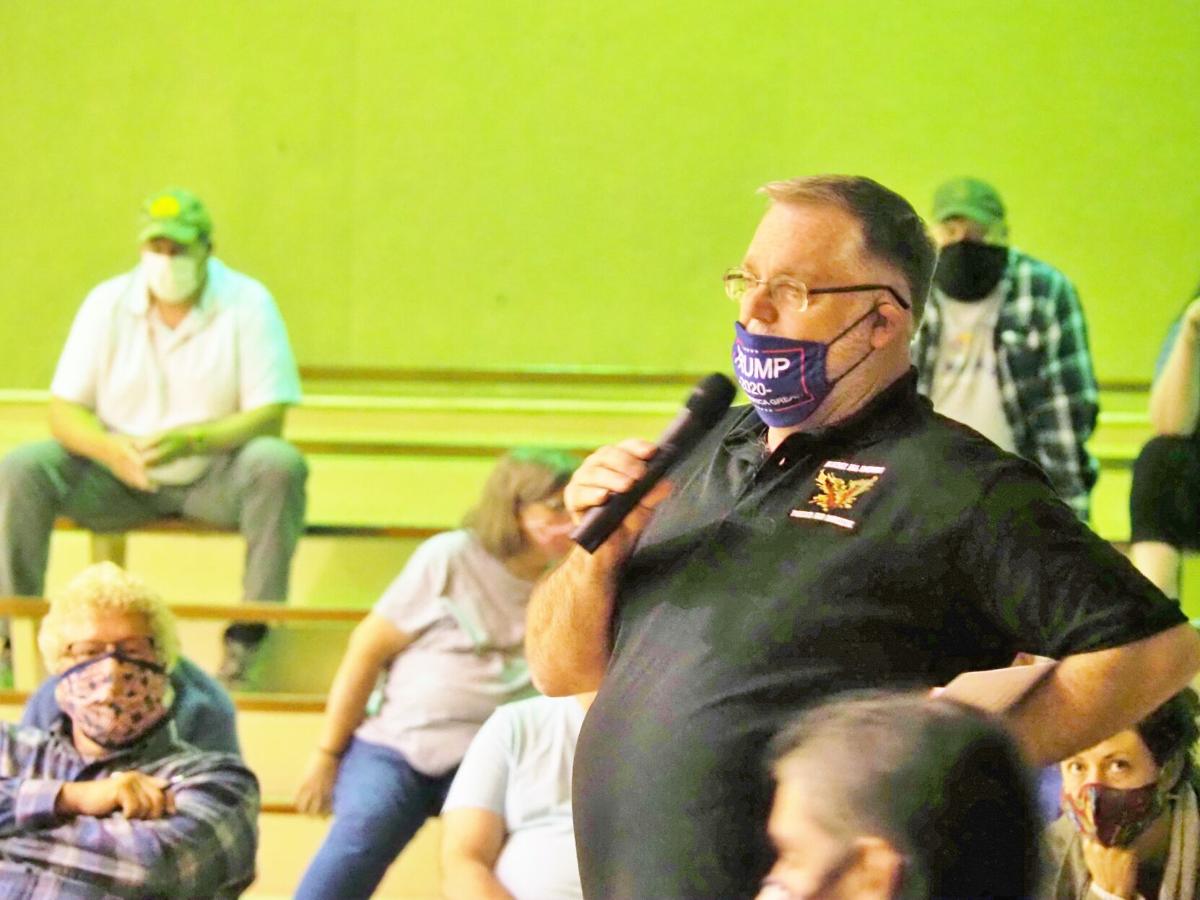 Jeffrey Garrison addresses the audience during a public meeting Wednesday, Sept. 9, at City Auditorium to discuss a proposed rental licensing and inspection program in Osawatomie. 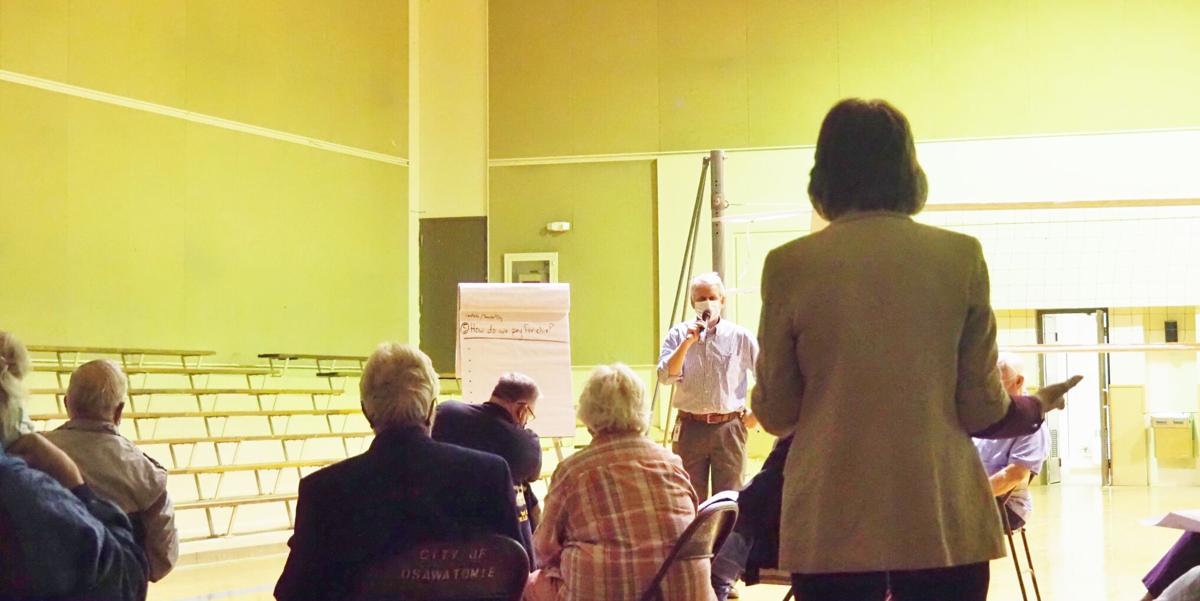 Jeffrey Garrison addresses the audience during a public meeting Wednesday, Sept. 9, at City Auditorium to discuss a proposed rental licensing and inspection program in Osawatomie.

OSAWATOMIE – Mayor Mark Govea said one issue he continues to hear about when talking with community members is a strong desire to clean up Osawatomie.

During a public meeting on a proposal to implement landlord licensing and rental property inspections, City Manager Mike Scanlon told the audience of more than 60 people at City Auditorium on Wednesday, Sept. 9, that the City Council, community and city staff have established five goals for the community, and cleaning up the community is at the top:

1. Clean up the community

4. Housing of all types

Of these goals No. 1 needs the most attention, Scanlon said.

Scanlon said not only has the city staff, community and City Council identified the problem – clean up the community, especially unkept rental properties – but the economic indicators bears out the impact as well, he said.

Other communities over the last 11 years shows a different trend in their property values: Spring Hill, up 22 percent; Louisburg, up 13 percent; and Paola, up 12 percent.

Scanlon told the social-distanced audience wearing masks at the town hall-style meeting that when it comes to property values the community is headed in the wrong direction. He said one way turn it around is to focus on rental properties.

Mayor Mark Govea said in a follow-up interview there are so many interpretations of what cleaning up the city means.

“There are also so many ideas on what needs to be done. The housing is only a part,” Govea said. “The meeting was an opportunity to get input from key people involved and directly affected.

“This city administration and governing body has made every effort to be totally transparent getting input from the community,” the mayor said. “It’s obvious there is a need. How and where to start is the big question, and this our attempt at that start.”

The meeting turned it into a 90-minute dialog, and Scanlon said he’s hopeful people were listening to each other.

Some in attendance were on opposite ends of the spectrum.

“For more than 45 years, I have considered it a privilege to provide affordable housing for those unable or unwilling to own their home. I am standing to speak against licensing landlords and rental home inspections,” landlord Virginia Adams said during the Aug. 13 City Council meeting. In a follow-up interview after the public meeting Sept. 9, Adams said her position remains the same.

She said it’s not necessary to punish all landlords because of a few that fail to maintain their properties.

“Why not deal with those owners with the ordinances already in place,” Adams said. “Could you not inspect properties that receive complaints of tenants against landlords? Why vote a process that will be very costly to the taxpayers and/or land owners and eventually the tenants themselves?”

Adams said fees assessed by the proposed licensing and inspection program would ultimately have to be passed on to tenants, many of whom could not afford it.

Some other landlords in attendance were of the same mindset, but not all of them.

Jason Grote, a property manager from Kansas City who is looking to buy properties in Osawatomie, said he is already operating rental properties in other locations that have rental inspections. Grote said he thinks once the program gets started, good landlords will realize it is not a big deal and will not oppose it.

Some homeowners also were in attendance and supported the proposal.

Homeowners Roy and Theresa Seichepine said they are fed up with the rental property around them. They brought a collage of pictures and shared them with the audience.

At the end, Scanlon offered up what he thinks the next steps are and that they will be discussed at the second public meeting scheduled for 6:30 p.m. Wednesday, Sept. 23, at City Auditorium. Those steps include:

1. A housing program that assists all residents

2. A registration program for rental properties (no fee)

3. A city ordinance that allows the city to trigger an interior inspection if there are at least three exterior violations in a year on rental properties

4. An incentive/loan/home repair program that assists landlords in improving their properties

5. A loose confederation of landlords working to help each other improve their properties by sharing information on things like contractors and pricing.

“We had a very spirited dialogue about the City considering rental property regulations – a conversation that I think we can build on,” he said in an email.

Scanlon said he didn’t think anyone would disagree the community has a problem with both the upkeep of homes and the financial burden that landlords are facing because they can only charge so much – in many cases below market rate – for their rental properties.

“Maintaining our residential properties whether owner-occupied or rental is important to everybody – it’s figuring out how to balance regulations with incentives, that will be the biggest trick we face,” Scanlon said.

But the city manager noted reason for optimism.

“When people have passion a community has the chance to better itself,” he said. “I found the conversations with the landlords uplifting and hopeful and the passion will serve us well.”

Someone should really tell people the proper way to wear face masks. IT does NO ONE any good to have YOUR NOSE outside of the mask! Photographers and advertisers etc., should think before snapping a picture that is going to be published because it is a poor role model for society. This Pandemic is here to stay and will stay probably through 2021. Hopefully a viable vaccine will happen. However, in the meantime wear a mask and wear it properly. If you wear glasses put the glasses On top of the mask near the bridge of your nose to stop fogging up of your glasses!