You are the owner of this article.
Edit Article Add New Article
You have permission to edit this article.
Edit
News
Announcements
Voices
Sports
Obituaries
Special Sections
Multimedia
Classifieds
Contests
Info
1 of 9 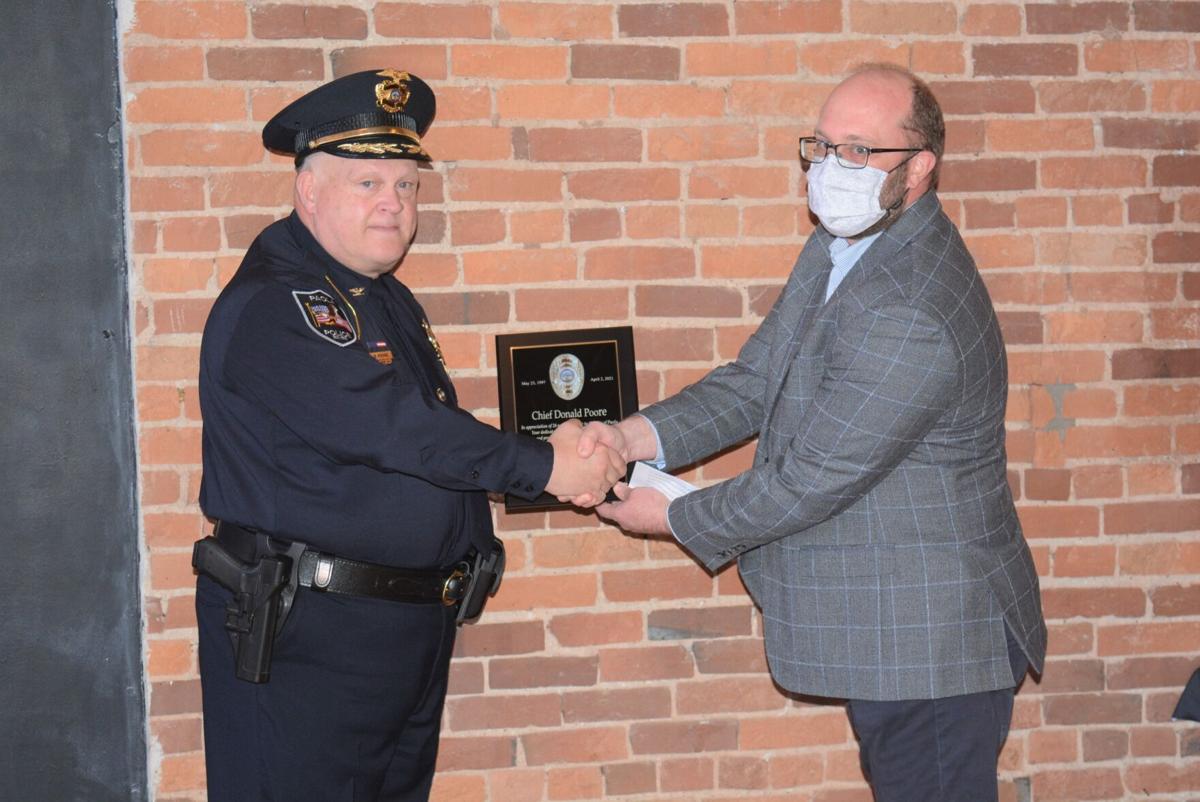 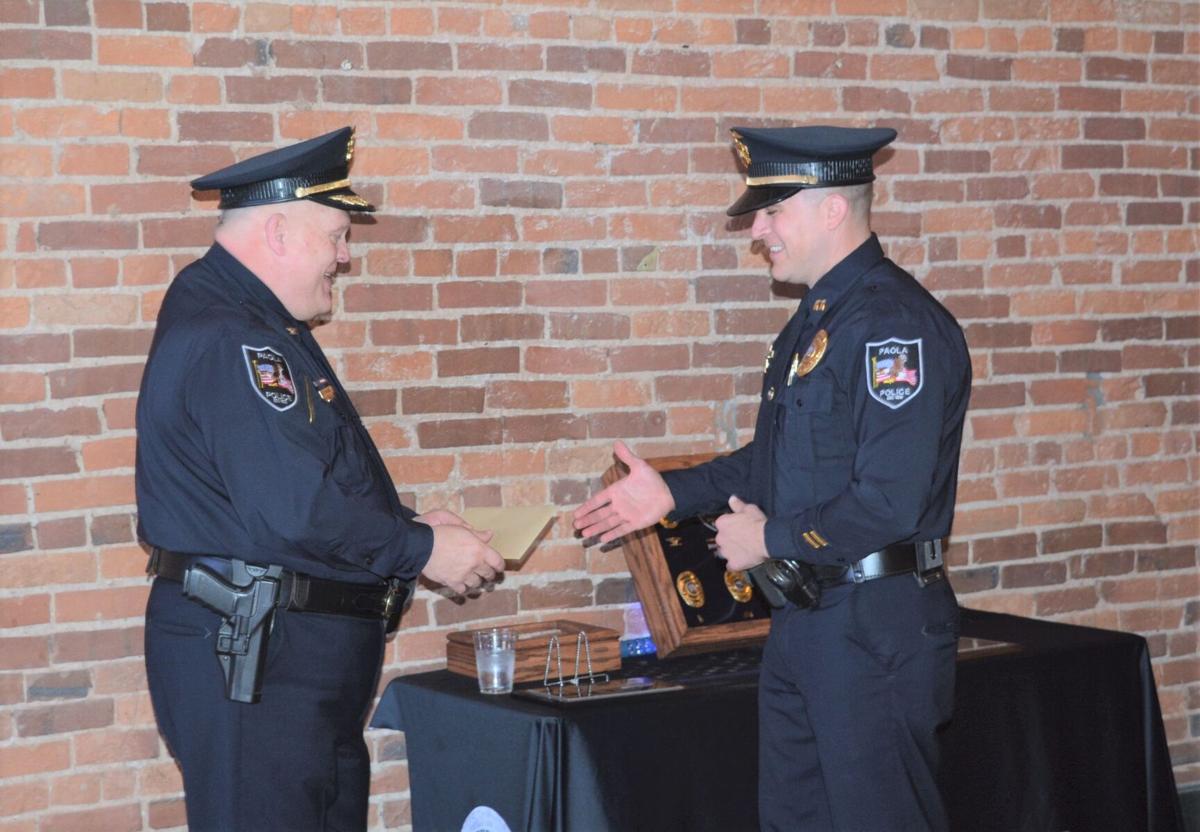 Paola Police Chief Don Poore (left) is congratulated on his retirement by Capt. Eric Jenkins. Jenkins will serve as interim chief while the city looks for Poore's permanent replacement. 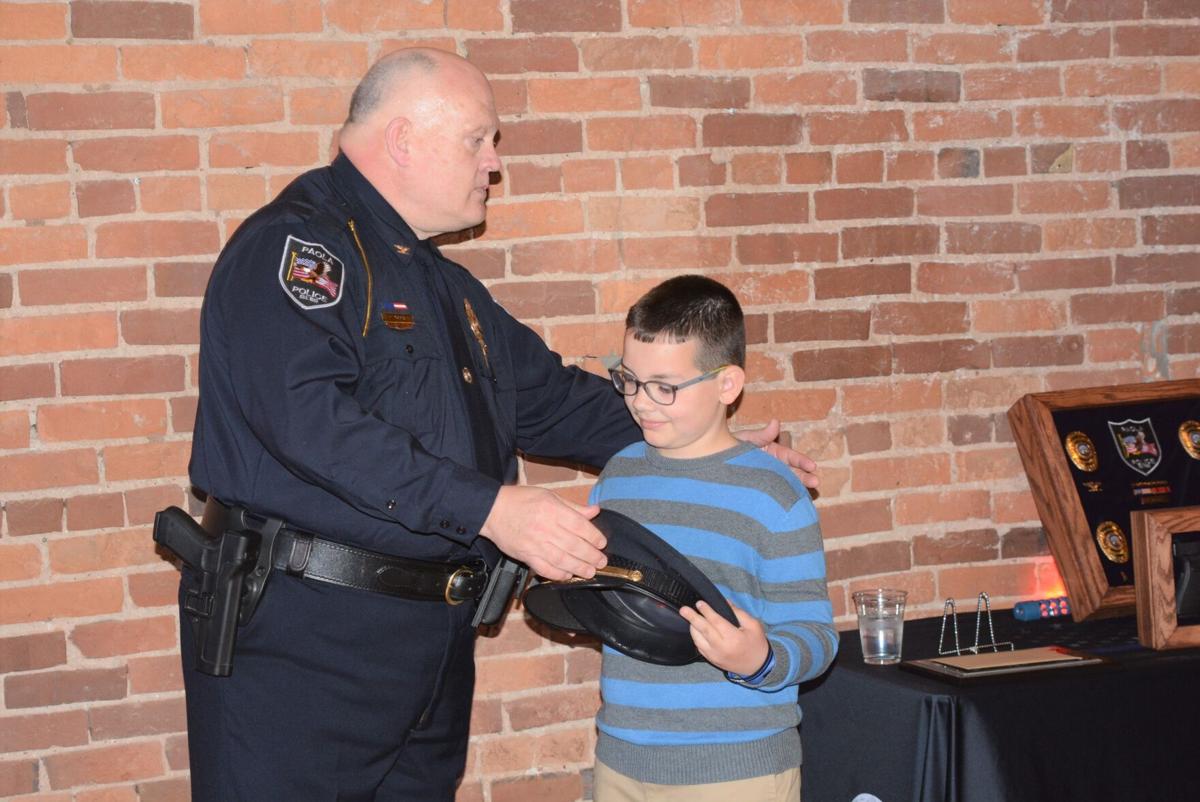 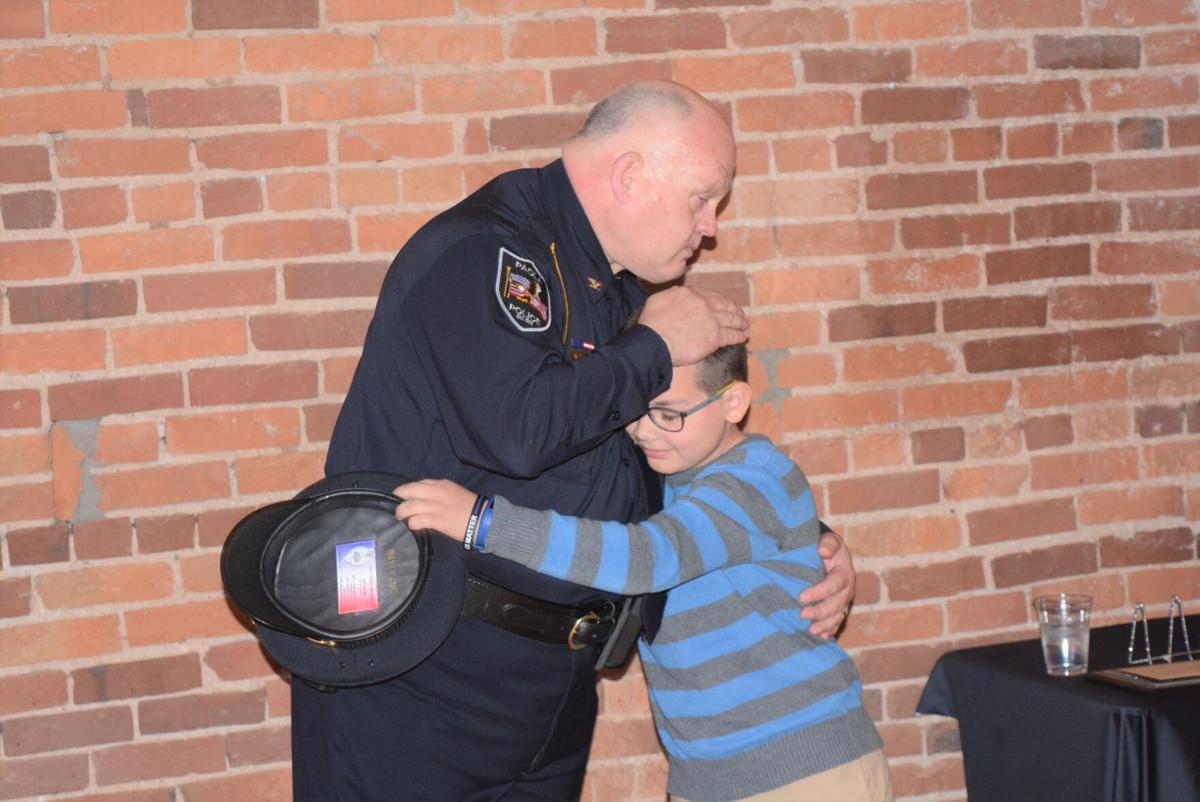 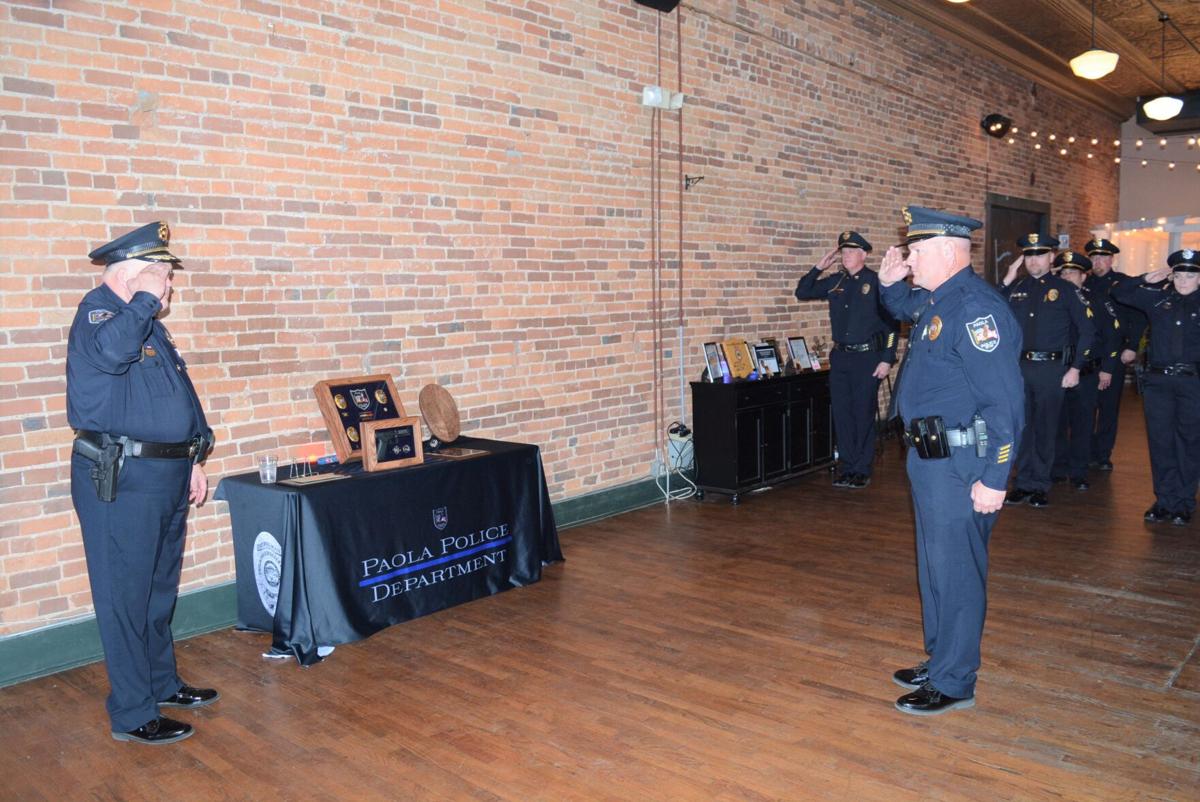 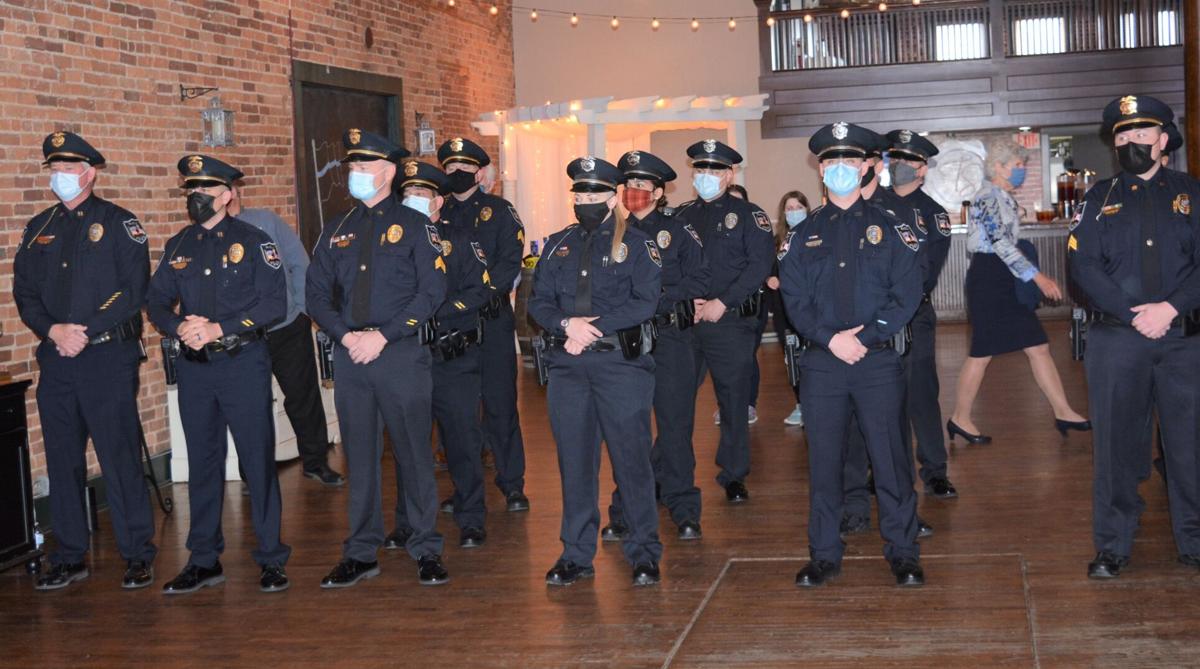 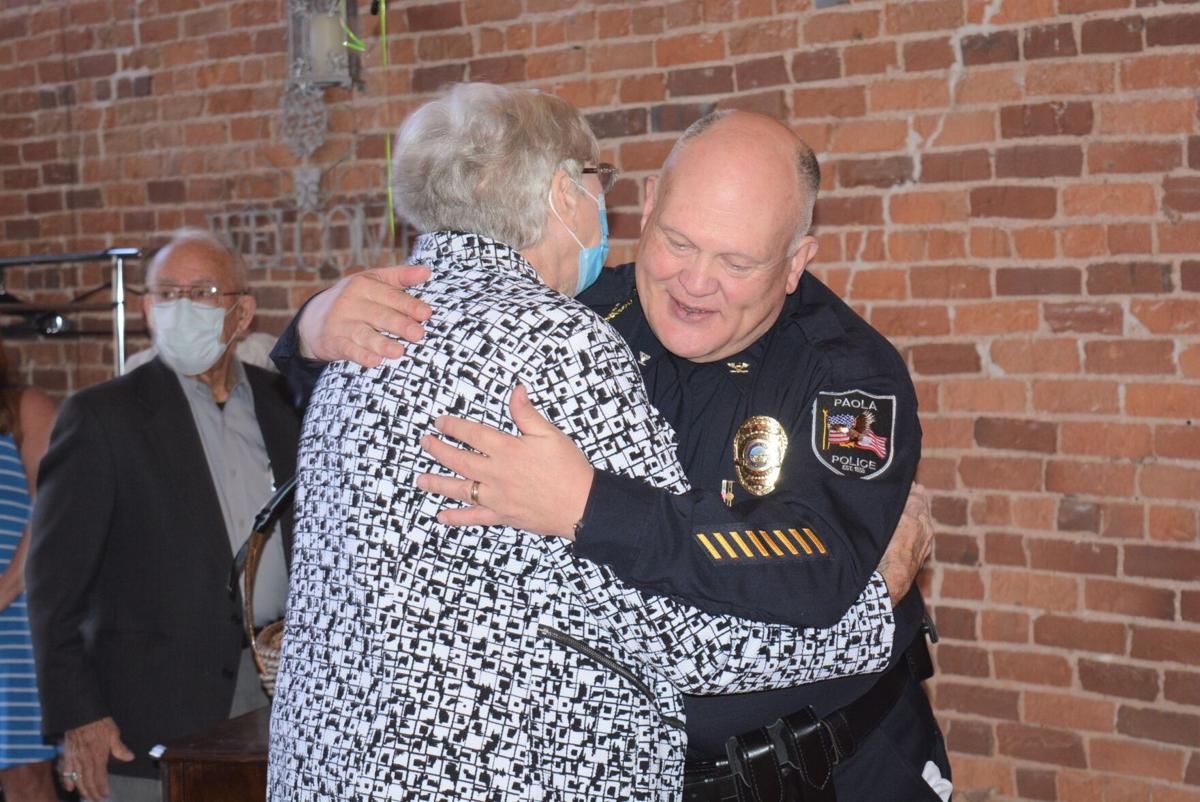 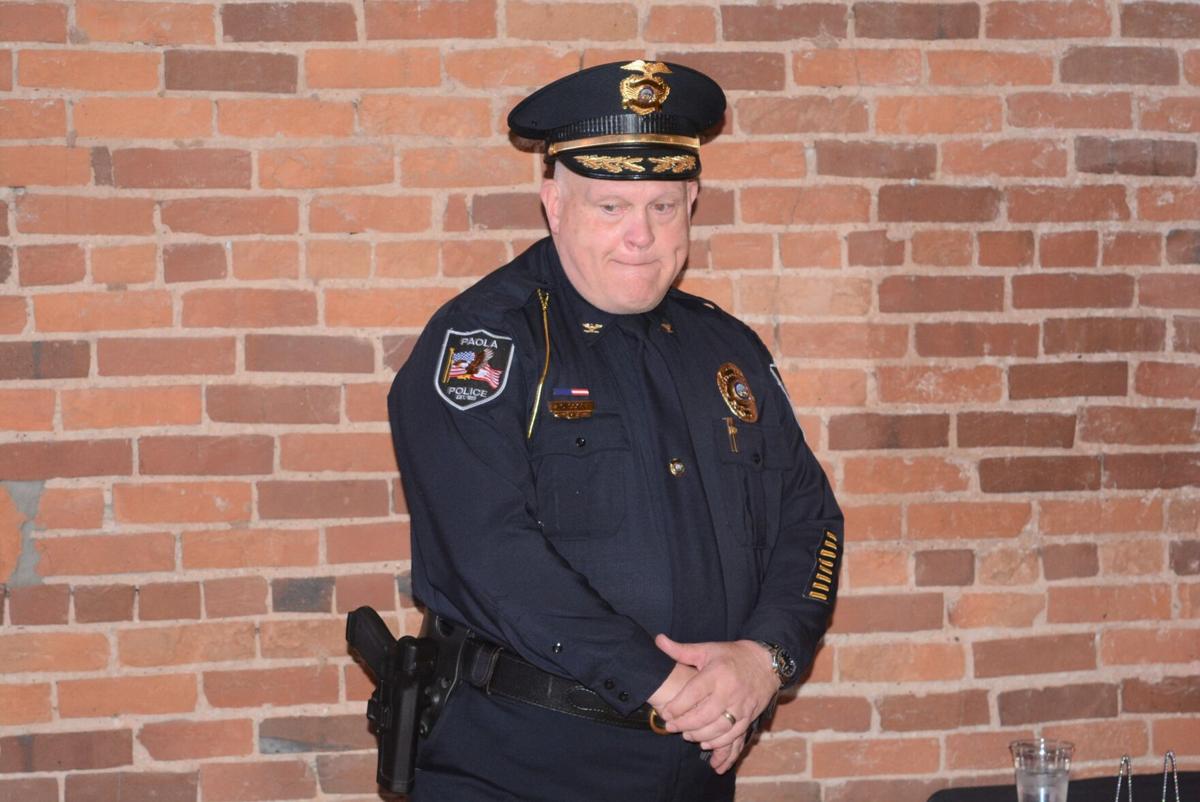 Paola Police Chief Don Poore had to fight back tears during an emotional retirement celebration Friday, April 2, at Town Square. 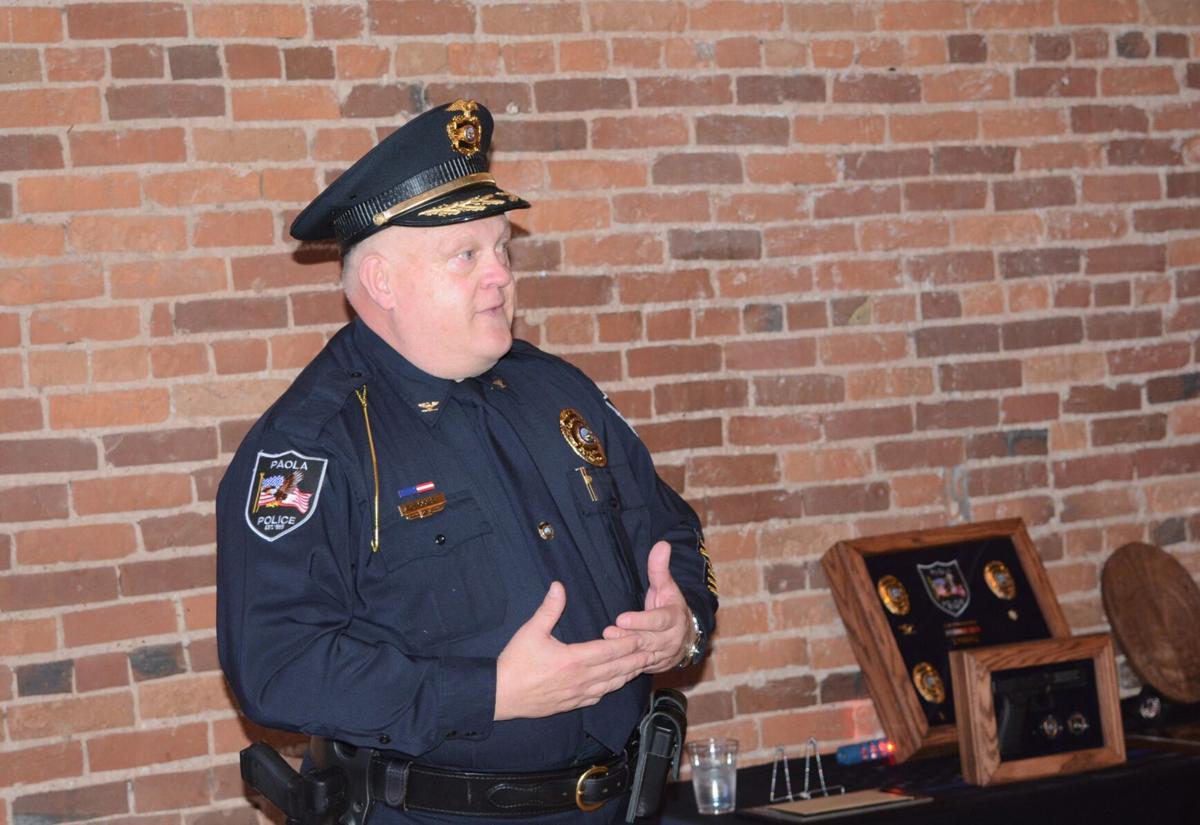 Paola Police Chief Don Poore thanks the community for its support while speaking during his retirement celebration Friday, April 2, at Town Square.

Paola Police Chief Don Poore (left) is congratulated on his retirement by Capt. Eric Jenkins. Jenkins will serve as interim chief while the city looks for Poore's permanent replacement.

Paola Police Chief Don Poore had to fight back tears during an emotional retirement celebration Friday, April 2, at Town Square.

Paola Police Chief Don Poore thanks the community for its support while speaking during his retirement celebration Friday, April 2, at Town Square.

PAOLA — Don Poore said the emotions of his last official day in law enforcement really started to hit him on the morning of Friday, April 2, when he put on his uniform for the final time.

“It hit me when I looked in the mirror,” said Poore, who has worked for the Paola Police Department for the past 24 years and has spent 43 years total in law enforcement.

Poore began his career in 1977 as a prison guard before taking a job with the Abilene, Kan., Police Department in 1978.

As a fresh-faced kid from Baton Rouge, La., Poore was 20 years old and couldn’t even buy ammunition for his revolver at the local Alco store.

“They had to wait until I turned 21 to send me to the academy,” he said.

It was almost enough to push Poore away from the career entirely, but he stuck with it, and he ended up learning a lot from his mentor, legendary Salina police chief John Woody.

When Poore took over as Paola’s chief of police in 2017, after serving several years as deputy chief, he made sure his office featured the same bulldog figurine that Chief Woody had in his office for many years. It was a gift Chief Woody gave to Poore before he passed away in 2011.

“Chief Woody used to say, ‘I’m nothing special, it’s the people I surround myself with,’” Poore said.

Those are words Poore took to heart, and he said he believes the Paola Police Department has the best collection of officers and command leaders around.

“They’re my friends and my family,” he said. “I’m only as good as the people around me, and they made my job as chief easy.”

When Poore looks back on his career, he said one of the things he is most proud of is implementing a procedure in which his officers who lead a funeral procession will get out and stand at attention and salute as the rest of the vehicles arrive. It’s a sign of respect he said has been much appreciated by families over the years.

Poore spent much of his first decade with the department as a detective working child abuse cases. Although it took an emotional toll on him, it also motivated him to continue to help children whenever he could.

“It’s the hardest thing I’ve done in my career, and the most rewarding,” he said.

Poore went on to volunteer with Big Brothers Big Sisters, and he said he plans to continue to find ways to volunteer in the community during his retirement.

Poore’s colleagues were joined by several other community members Friday afternoon for a retirement celebration at Town Square.

City Manager Sid Fleming presented Poore with a plaque, and his fellow uniformed officers lined up for an official salute.

“You had our backs the entire way,” Jenkins said. “You mean the world to us.”

Fleming said Jenkins will serve as interim police chief while the city begins the process of selecting Poore’s permanent replacement.

With the emotion of the moment hitting him, Poore called his grandson Easton up so he could give him his hat and badge. He then thanked the community for supporting him.

“I’m very proud of this community,” Poore said. “I’ve enjoyed working for you.”