Skip to main content
You are the owner of this article.
Edit Article Add New Article
You have permission to edit this article.
Edit
News
Announcements
Voices
Sports
Obituaries
Special Sections
Multimedia
Marketplace
Contests
Info
1 of 3 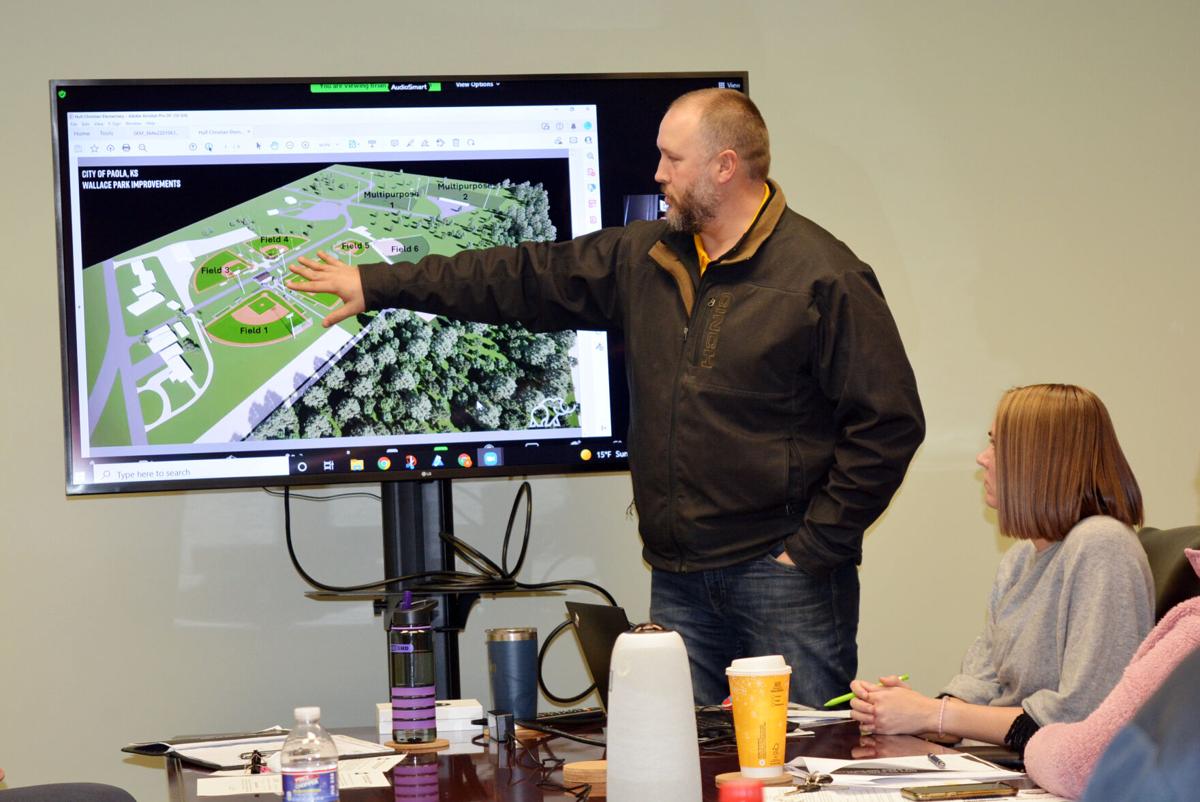 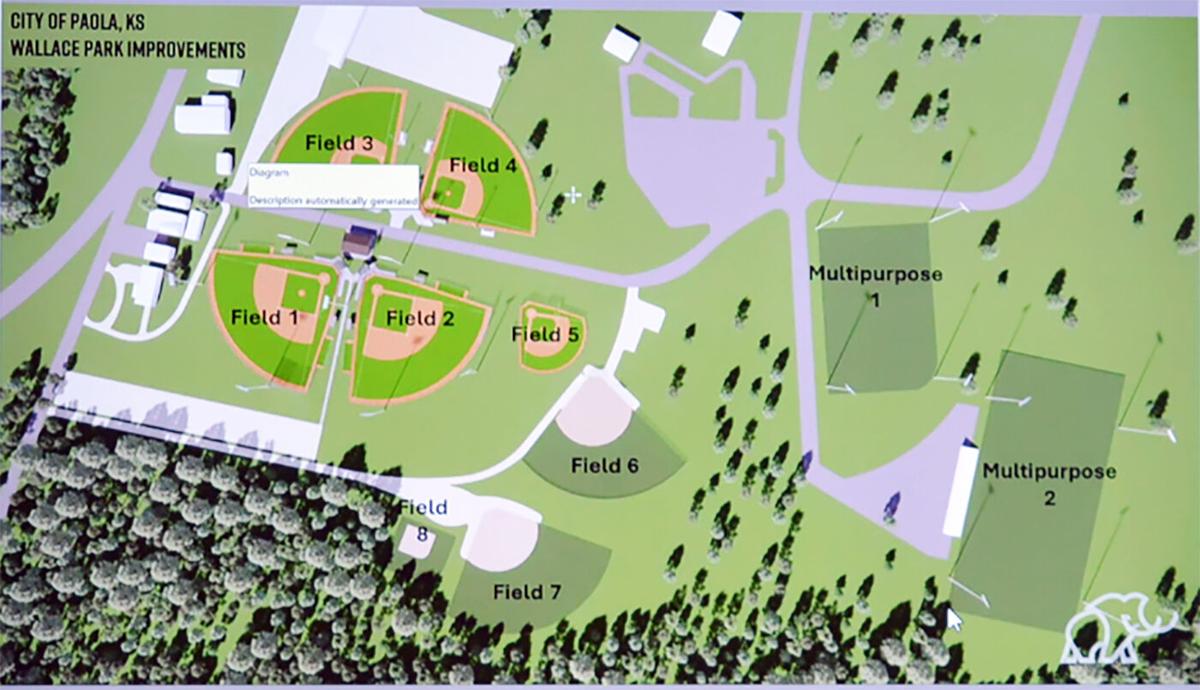 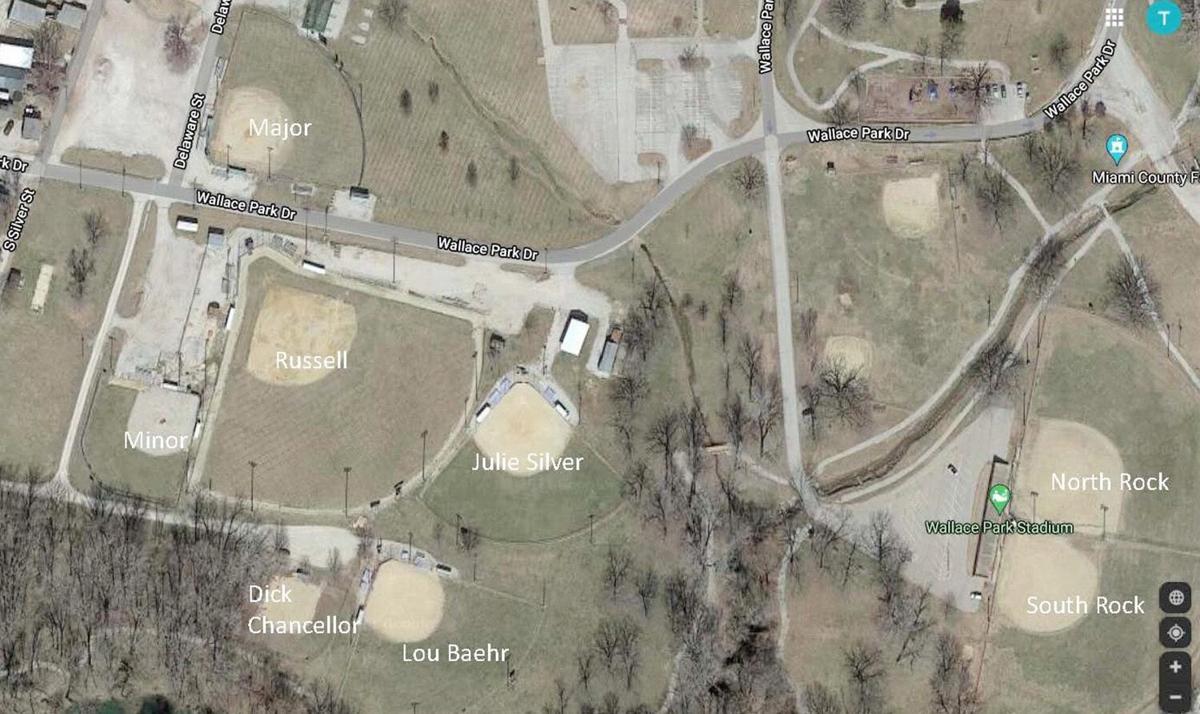 This map provided by Paola Youth Sports displays the current locations of ballfields at Wallace Park.

This map provided by Paola Youth Sports displays the current locations of ballfields at Wallace Park.

PAOLA — Local youths could be playing ballgames on new turf fields in Wallace Park as early as this spring if proposed plans continue to move forward.

Paola City Council members and other city officials reviewed the latest plans during a work session Thursday, Jan. 6, with Justin Smail of Paola Youth Sports and Brian Morris of Mammoth Sports Construction based in Meriden, Kan. Morris appeared via a Zoom call during the work session at Paola City Hall.

The city of Paola does not yet have an official design or construction contract with Mammoth Sports, but Smail and his fellow Paola Youth Sports representatives have been working with the company to come up with proposed plans for city officials to review.

The city also received help with the ballfields last year from Confluence, which oversaw the city’s update of its comprehensive plan and helped develop the Paola Sports Complex Needs Survey.

New ballfields, as well as improvements to the Paola Family Pool, are set to be funded by the city’s half-cent sales tax, which voters renewed in 2019 and is expected to generate between $12 and $14 million during the next 15 years.

The budget for the projects became more clear last October, when Paola City Council members approved an ordinance that authorized the issuance of general obligation bonds totaling an estimated $6.7 million ($4.2 million for the sports complex at Wallace Park; and $2.5 million for improvements to the Paola Family Pool).

The latest design reviewed at the work session carries a price tag of $5.5 million, but Smail and Morris both explained why that total is high and will likely be reduced to closer to $3.5 million. Smail said he gave Mammoth the entire wish list just to get an idea of the total, and it included easily-reducible items such as a $400,000 contingency and nearly $500,000 for a concessions stand and playground.

“There’s a lot of room to trim that down and still get the facilities inside the budget,” Smail said.

Morris also said all of the estimates are high because they do not yet have information from a survey or geotechnical report to determine what type of site preparation is needed and if soil stabilization is required.

The plans reviewed at the meeting showed two new turf ballfields being built out of the flood plain north of Wallace Park Drive and east of the Paola American Legion, replacing the existing Major Field. Officials expressed optimism that designs for those fields are solid and won’t rely as much on the results of the survey and geotechnical study, which means work could begin on those before the rest of the improvements.

The other improvements shown on the proposed design include two new grass fields south of Wallace Park Drive replacing Russell and Minor fields. The fields would not have as large of a footprint as the existing Russell Field, and Smail said that would get them away from areas that typically flood.

Still, the fields are planned to be grass to limit the city’s investment and any potential damage from flooding.

The plans also show the creation of a smaller field between the new grass fields and the existing Julie Silver Field. Smail said it would be a T-ball-sized field that could be used in addition to the existing Dick Chancellor field to the south.

Only minor improvements would be made to the existing Julie Silver and Lou Baehr fields.

It would also mean Paola Youth Sports would no longer need to use soccer fields on Miami County Fairgrounds property, which Smail said is something they have been wanting to fix.

Lighting for all of the fields is also a significant cost in the analysis, totaling $1.2 million. While some of that may be reduced, Smail said he likes the idea of lighting the new multipurpose fields because it would allow practices and games later in the evening, and it would make the fair carnival safer. Smail also said the proposed LED lighting is much more efficient than the current lights.

Council member LeAnne Shields raised concerns about flooding in Wallace Park, continuing a stance she took in October when she said she was against building new fields there because of the flooding from Bull Creek.

Shields advised all of the council members to go to YouTube and watch videos from the 2017 flood, which shows large portions of Wallace Park underwater. Even if the fields are grass, Shields said cleanup is not easy after a flood.

Acting Interim City Manager Randi Shannon said all of the city officials realize it floods in Wallace Park, which is why she believes the next step in the process should be to get the survey work done to know what they are working with and what type of site preparation work may be needed.

“I think the first step is engineering and surveying,” Shannon said. “It would give us so many answers down there.”

New Mayor Leigh House agreed that the survey and engineering work should be the next step, and the council members should trust the results.

“Mammoth is not going to have their engineers rubber stamp something that doesn’t work,” House said.

No official decision was made at the work session, but council members were initially scheduled to consider an engineering contract with Mammoth Sports Construction during the Paola City Council meeting Tuesday, Jan. 11. Council members decided to table the agenda item until their February meeting.