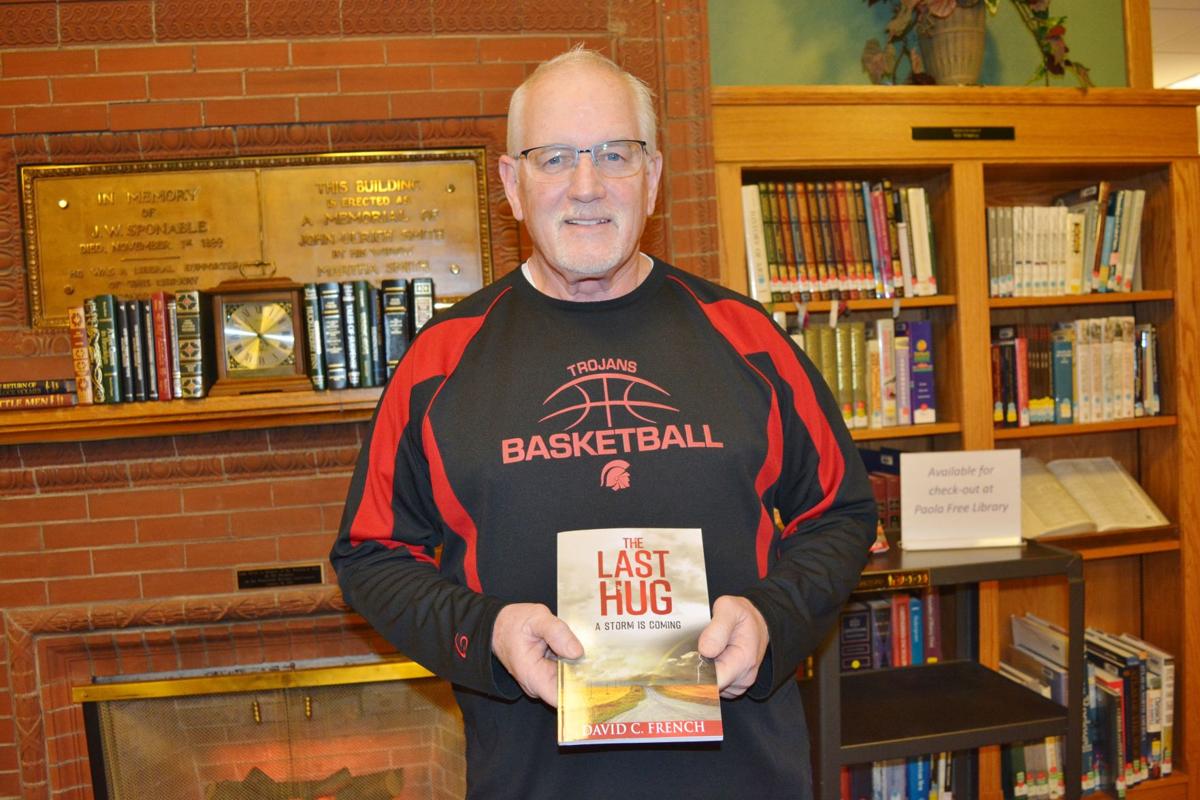 Dave French, a longtime Osawatomie teacher and coach, recently published a book called “The Last Hug: A Storm is Coming.” 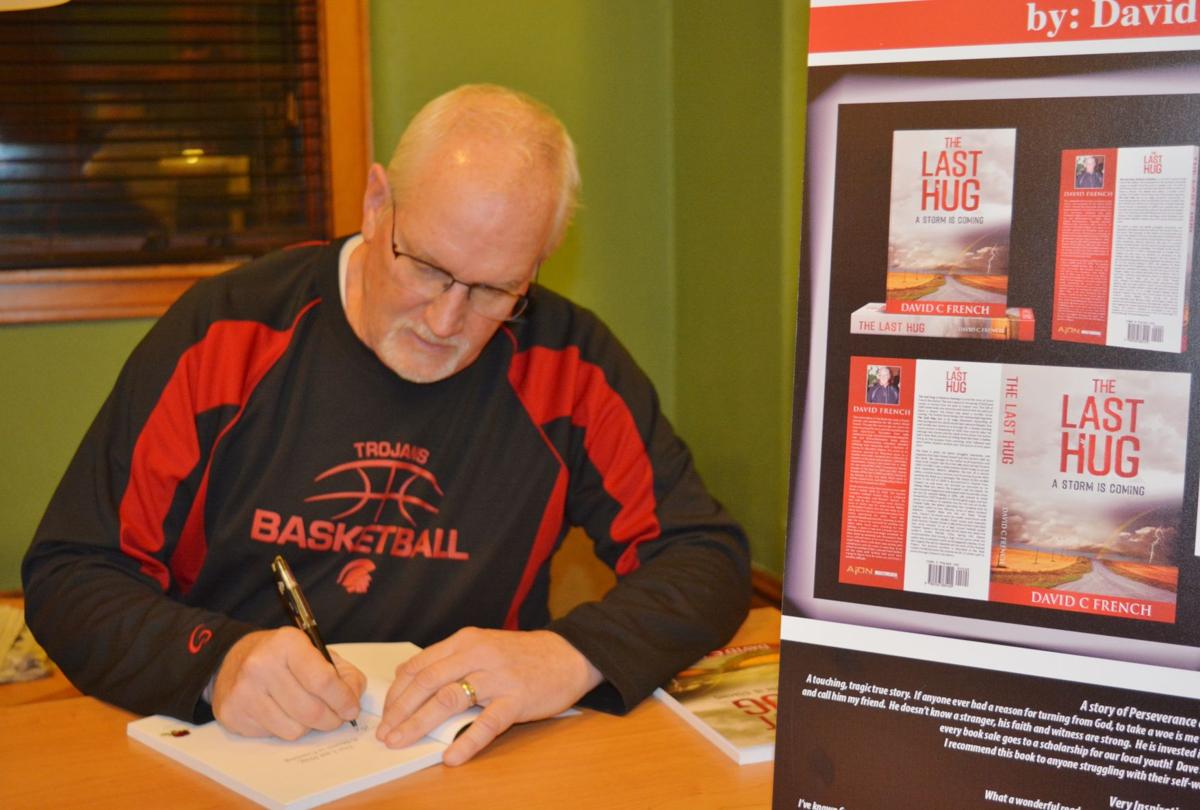 Dave French, a longtime Osawatomie teacher and coach, recently published a book called “The Last Hug: A Storm is Coming.”

PAOLA — Sound disappeared and time stood still as Dave French laid in the back of an ambulance, realizing he could very well be dying.

With his head spinning from a concussion and his body riddled with injuries inflicted during a head-first fall from a ladder just minutes earlier, Dave mustered the strength to do the only thing he could do — pray.

He prayed with a sincerity he had never known until that moment.

He asked for forgiveness.

He asked for one more chance to see his family.

He asked for another opportunity to teach.

And as the ambulance sped toward the hospital, Dave had a realization in the stillness of that moment that he could not deny — his storm had arrived.

Just six months earlier, in September of 2009, Dave had one of the most vivid dreams of his life.

He dreamt of an impending storm, and he remembers telling his wife, Lori, how it felt to see the black and grey clouds bearing down on him with fury and power.

The vision could have been indicative of any number of things. After all, Dave had already endured several storms in his life, including the loss of two siblings, a sister-in-law and a cousin in vehicle accidents.

But the fact that the storm in his dream had not yet arrived gave Dave the uneasy feeling that some type of life struggle was ahead.

He thought he experienced it when his 17-year-old son, Andy, was diagnosed with an irregular heart rhythm that required the installation of a pacemaker, ending his football career. But just 10 days later, the ladder accident occurred that changed Dave’s life forever.

It didn’t take Dave long to realize, after waking up in the hospital, that his prayers were answered. He was battered and bruised, but he would survive.

It also didn’t take long for Dave to be inspired to start sharing his story with others. Little coincidences kept happening that gave Dave the feeling he was going through his struggles for a purpose.

The doctor who first told him he was lucky to be alive happened to be his sister-in-law, Becky, who was on call that day.

After striking up a conversation with the cleaning lady in his hospital room, he learned she was struggling with the recent loss of both her husband and son. He also learned her son died on Sept. 24, which is Dave’s wedding anniversary and the day his daughter was born. She was so thankful to talk with him that she risked getting in trouble at work to return the next day.

Later, Dave was surprised by another woman who entered his hospital room. This one ended up being the former girlfriend of his brother who was killed in a vehicle accident. She also spent two days speaking with Dave, healing by asking questions and talking about her life now.

“It started with a word,” he said. “And that word became a sentence, and that sentence became a chapter.”

Dave first shared his story publicly at First Presbyterian Church in Osawatomie, and he began handing out written versions to people who were facing struggles and needed hope.

People kept encouraging him to write a book, and his written story became the first chapter in a book called “The Last Hug, A Storm is Coming.”

The title pays tribute to his mother, who Dave said was only 5’1” and 105 pounds but gave the biggest hugs.

“I’ll never forget my last hug with her,” he said.

The title also refers to his dream about the storm that plays such a significant role in his story.

“We all have our own storms,” Dave said. “What’s most important is the people who help you through the storms.”

After nearly a decade of work, the book was published last fall, and Dave said he’s already heard from people who have been inspired and positively impacted by his story.

“That’s what it’s all about,” Dave said. “This book can help others.”

Dave, who taught and coached for 34 years in the Osawatomie school district and now is Director of Aquatics at the OZone, has already made about a dozen appearances to share his story and promote his book.

His most recent appearance was a book talk Tuesday, Feb. 25, at Paola Free Library. Dave shared his story and signed copies of his book.

One of those in attendance was Ted Rahmberg, whose three children had Dave as a teacher before he retired. Ted said he’ll never forget how great Dave treated his son on the Osawatomie basketball team and how fair he was as a coach with all of the kids.

Ted said he wanted to read Dave’s book to get a better understanding of what made him the great person he is.

“I read this from cover to cover,” Ted said. “It really moved me.”

Dave said he owes the successes in his life to the people around him, which is why he doesn’t consider his book to be a story about himself but rather a story about his family.

“It’s a narrative, but it’s a family narrative,” he said.

He concluded his presentation by challenging everyone in the audience to not be afraid to chase after their dreams.

“If you have a dream or goal, why aren’t you doing it?” he asked. “I didn’t set out to write a book. It happened because it was meant to be.”

“The Last Hug, A Storm is Coming” can be purchased online at Amazon.com or locally at Auten Pharmacy and Chris’ Cafe in Osawatomie and The Bean Coffee Co. in Spring Hill.

Strength amid and Strom with the help of the best education and then try to give the best result all-time with the help for their knowledge. This is the best selling book according to hire writers review you have to get a discount on it.