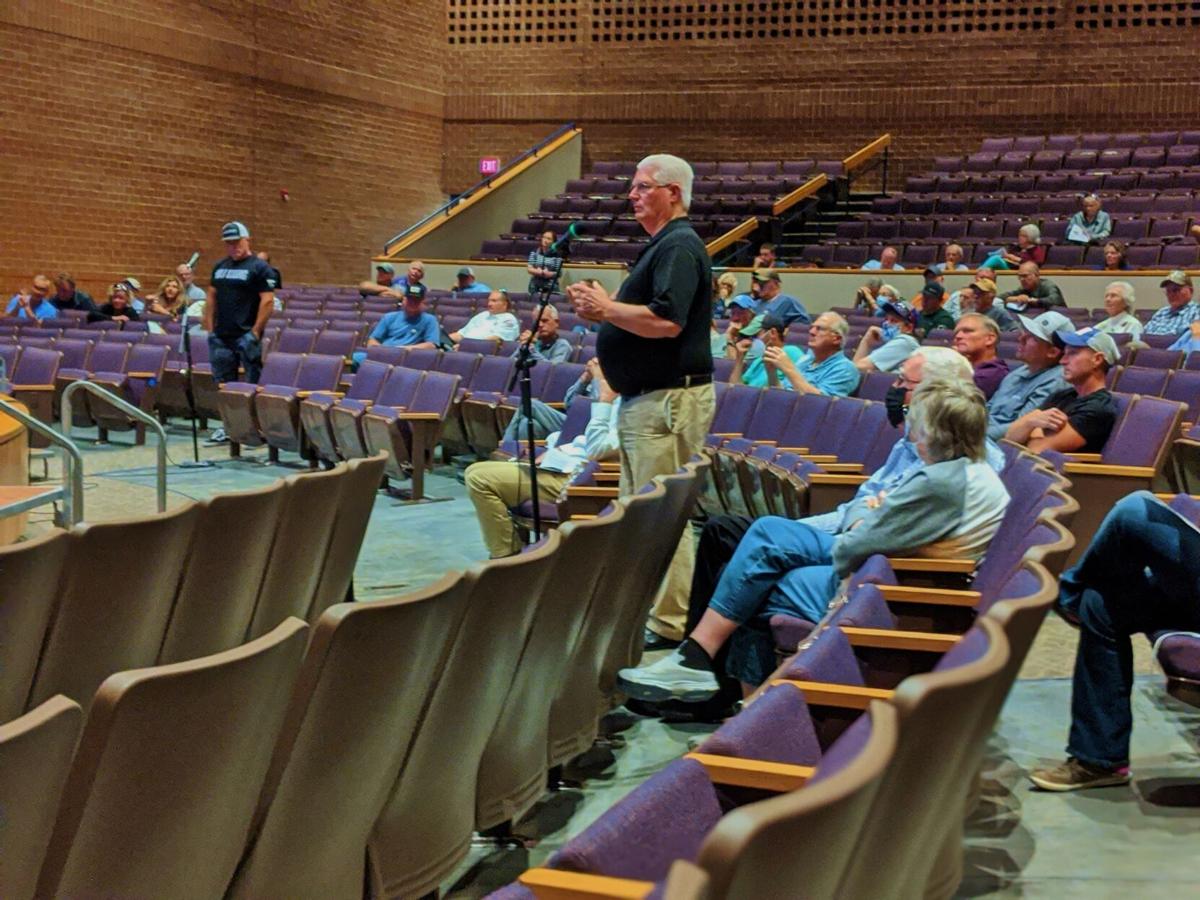 Louisburg resident Pat Apple expresses his concerns about the New Lancaster Road intersection during a public meeting about the expansion of Kansas Highway 68 on Thursday, Oct. 14, at Louisburg High School. 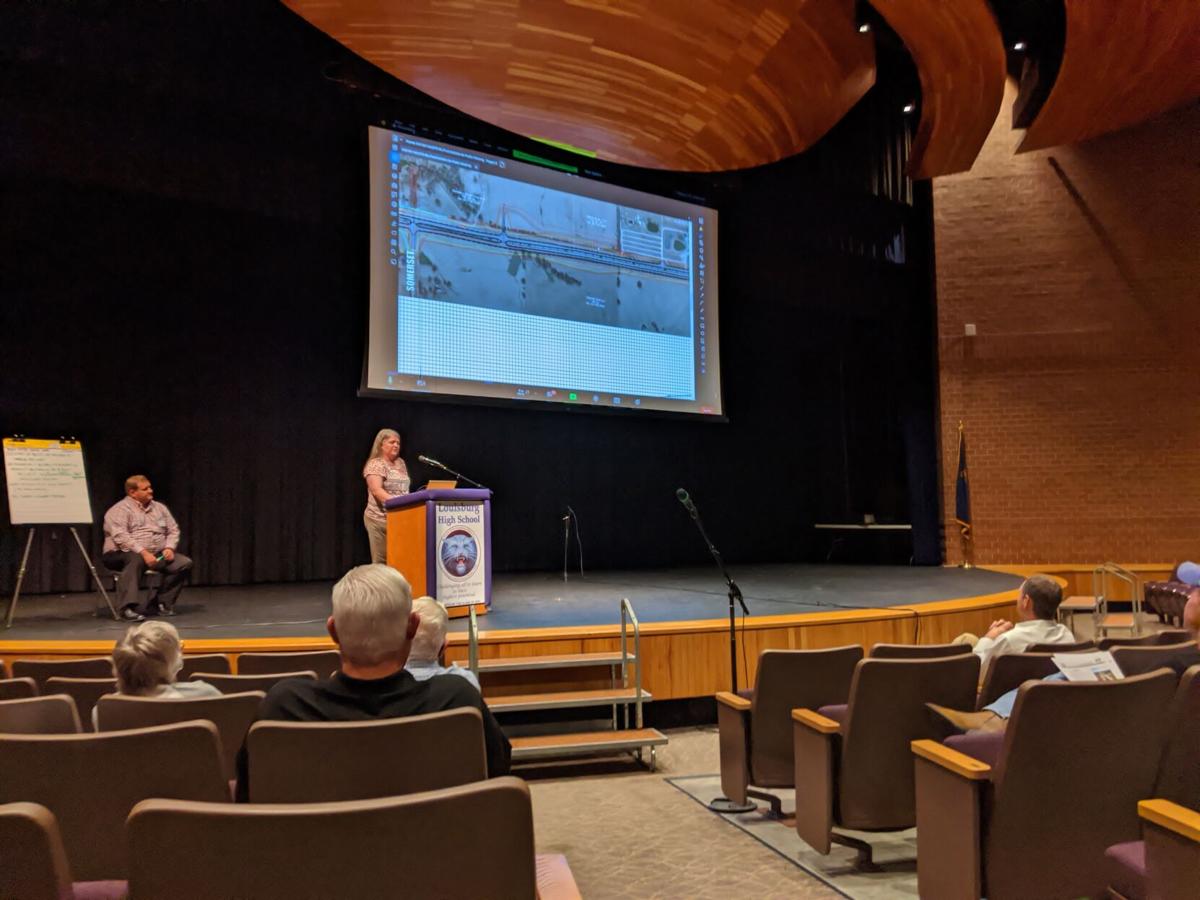 Linda Rottinghaus with Affinis, the consulting group assisting with the Kansas Highway 68 expansion project, provides a brief overview of the current design plan during a public meeting Thursday, Oct. 14, at Louisburg High School.

Louisburg resident Pat Apple expresses his concerns about the New Lancaster Road intersection during a public meeting about the expansion of Kansas Highway 68 on Thursday, Oct. 14, at Louisburg High School.

Linda Rottinghaus with Affinis, the consulting group assisting with the Kansas Highway 68 expansion project, provides a brief overview of the current design plan during a public meeting Thursday, Oct. 14, at Louisburg High School.

LOUISBURG — The final design plans for the expansion of Kansas Highway 68 to a four-lane expressway from U.S. Highway 169 north of Paola to U.S. Highway 69 at Louisburg are targeted for completion in 2023.

Kansas Department of Transportation officials and consultants met Thursday, Oct. 14, with about 100 area residents who attended a public meeting — in person at Louisburg High School or virtually — to talk about the preliminary plans for the project.

Many of the attendees either had property along K-68 or make the daily commute across that stretch of the two-lane highway which also passes in front of the Louisburg Cider Mill.

Though no funding has been dedicated for construction of the four-lane expansion, transportation officials expressed optimism that the project would be funded in the near future. Money has already been earmarked to complete the final design.

Linda Rottinghaus with Affinis, the consulting group assisting with the project, provided a brief overview of the plan — describing where access roads will be located, as well as intersections targeted for improvements and other aspects of the current design.

The project will eliminate driveway access to the four-lane expressway. Access roads that front the highway will be built to get residents to and from their homes to current north and south county roads.

That seemed to be the biggest concern for most of those in attendance. Residents asked officials how they would gain access to the four-lane highway.

Mike McKenna with Affinis said it will be designed so drivers can cross two lanes and wait in the 60-foot median to be able to turn onto the highway. He said that median is large enough to stack two or three vehicles or one tractor-trailer.

Some attendees mentioned Walmart trucks trekking across K-68 between distribution centers in Harrisonville, Mo., and Ottawa add to the congestion, as well as truck traffic created by the intermodal facility at Edgerton.

Residents who live north and south on New Lancaster Road were concerned about safely getting from that road onto the highway, especially during peak drive times in the early morning and after the workday ends.

Pat Apple, who lives just south of the highway on New Lancaster, talked about how traffic has increased considerably since the last full traffic study was completed in 2012, especially during those peak drive times in the morning and evening.

“The same aggressive driving you have in Johnson County, it’s on 68 Highway now,” Apple said.

The former state senator also urged transportation officials to be mindful of the increased stress that will be placed on north/south collector roadways.

“As the area continues to grow, we’re going to see much more traffic on those collector streets,” he said.

Attendees asked KDOT to complete a new traffic study. And to possibly look at lowering the speed limit on some stretches of the proposed four-lane expressway or possibly putting in a traffic signal and turn lanes at New Lancaster and possibly other intersections.

Other property owners expressed concern about rights-of-way taking their homes, barns, livestock ponds and other property and wanted to know more about how the state would handle right-of-way acquisitions.

Public comments are being taken until Nov. 1 on the K-68 expansion at the project website: www.ksdotike.org/Miami-County-K-68-Expansion.

KDOT said some rights-of-way have already been acquired during a previous T-Works project. Other rights-of-way and temporary construction easements will be needed. Property owners along the area are encouraged to complete the public comments.

The slideshow from the Oct. 14 meeting is available on that website as well as current plans for the project to review in more detail. Information also can be found on the site about T-Works improvement projects on K-68 to be let in December, with construction to begin in spring 2022.