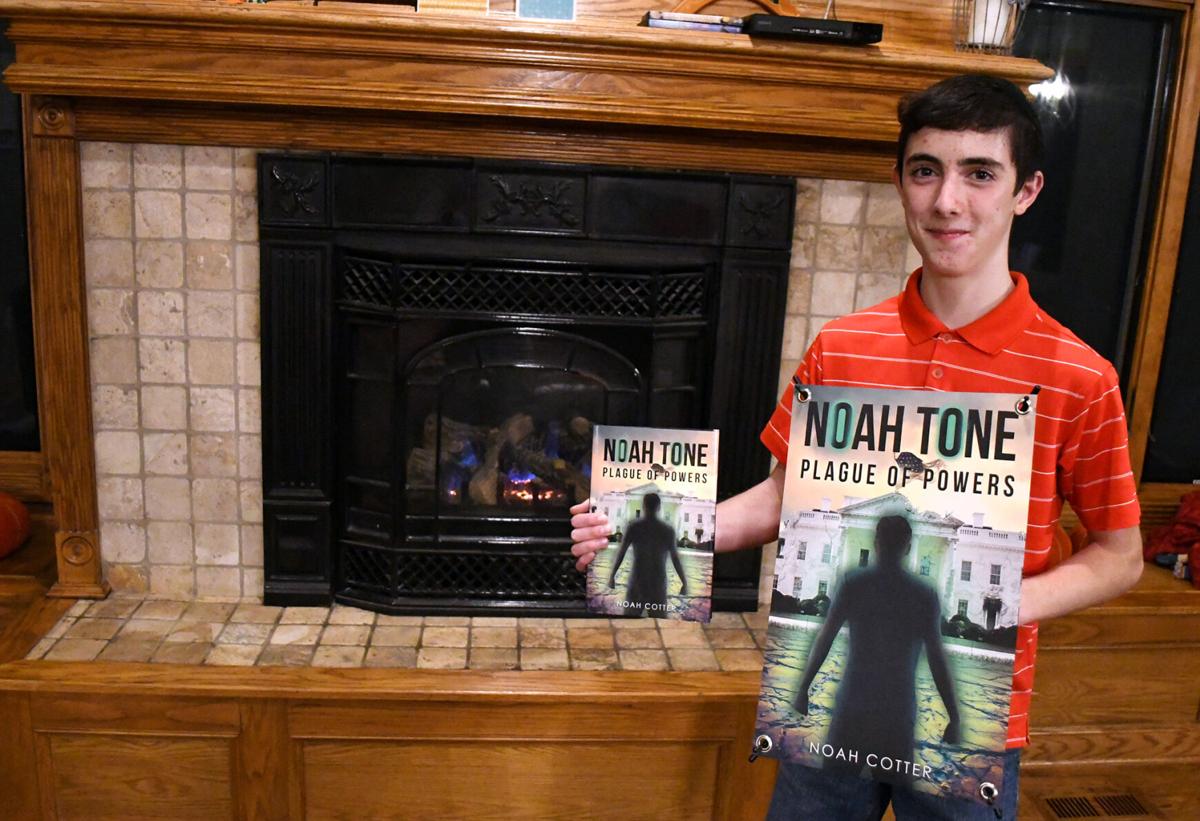 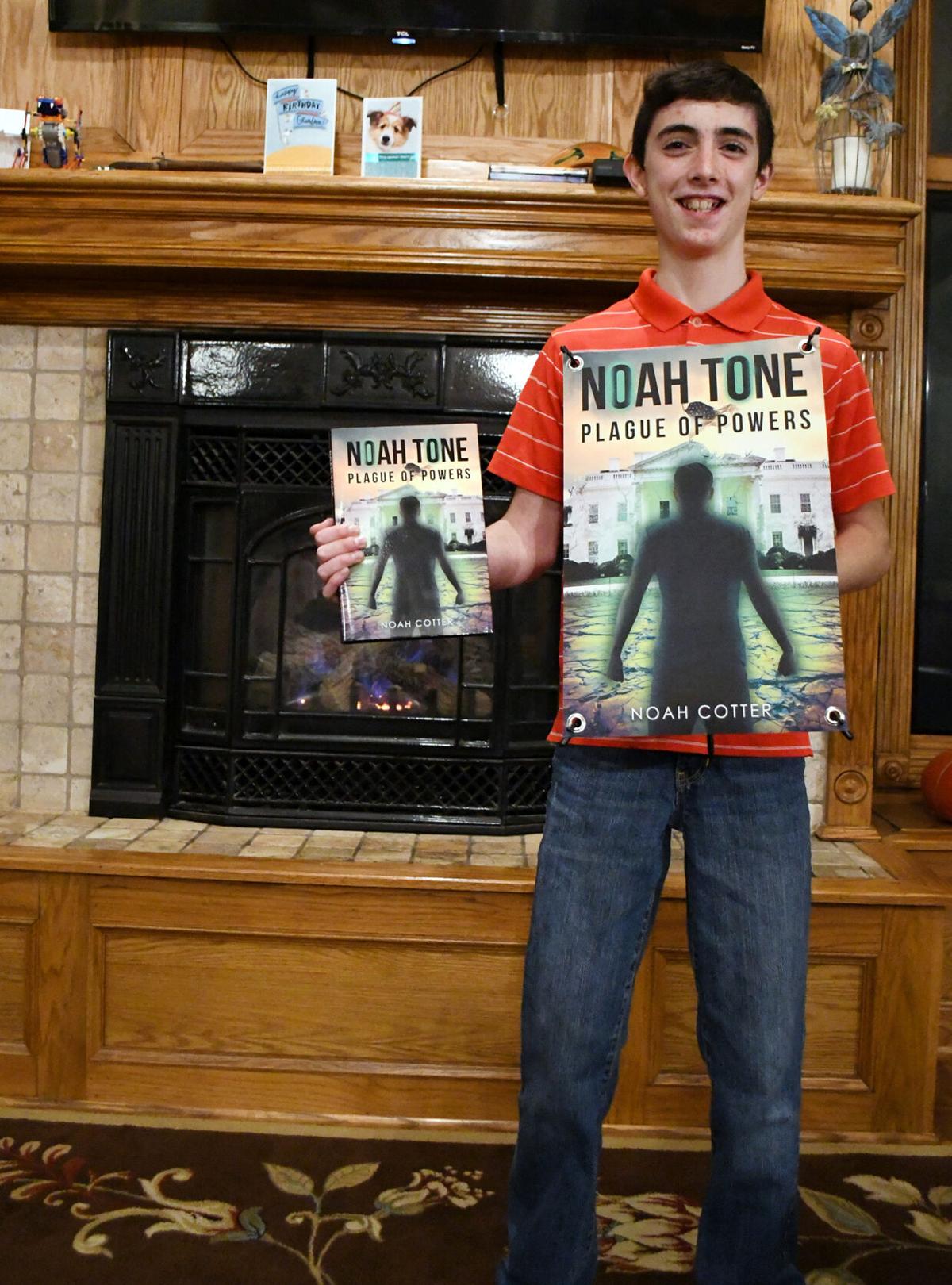 Noah Cotter turned his love for comics and science fiction into his first novel, Noah Tone Plague of Powers. It is the first in a series of books for the teenage author from Louisburg.

Noah Cotter turned his love for comics and science fiction into his first novel, Noah Tone Plague of Powers. It is the first in a series of books for the teenage author from Louisburg.

LOUISBURG — Noah Cotter set out to write a book he would want to read.

Noah Tone Plaque of Powers is the result of nearly two years of dedication with trials and tribulations. The book was published in May, when Noah was leaving the eighth grade.

Noah is one of the heroes in his first in a series of books, but he is not alone, joined in print on the more than 200 pages by his siblings, and even his parents, in the fight between good and evil.

Noah, a freshman at Louisburg High School, started writing the book when he was 12. It took about a year to write the book and another nine months to have it published.

“The tone part relates to his power of sound,” Noah said. “I was trying to come up with a name that would go with tone. Usually people do not want to put themselves in a book, but my name was perfect for it. Noah Tone sounded so good, I just put it there. Really the whole book is about what I like the most, super powers, science fiction, action. I wanted to make a book I would want to read. A book that was quick with action and kept the reader engaged.

“Noah Tone is a super human teenager who at the beginning of the book is just trying to make his way in his life,” he said. “But there is a secret force, Rebal, who are trying to take over the world with children like him who have powers.”

Helping Noah in the battle against the Rebal are his siblings: Levi, Ana, Seth, Jesi and John.

“I kind of used having my siblings in the book against them,” he said. “There would be times when they would annoy me and I would say, ‘What do you want me to do to your character in the book.’ They didn’t make me too mad.

“Every one of the members of my family have a unique place in the book,” he said. “They are not just a character. They play an important part in different ways.”

It all started with a comic book Noah came up with called Vibrato Man. When his Uncle Sheb from Texas saw the comic, he suggested Noah’s parents, Gabe and Sara, publish it.

“We really were not interested in doing that,” Gabe said. “We wanted him to just enjoy what he was doing.”

Noah turned his interest from the comic book to a novel. Sheb encouraged them to seek out a publisher.

This time, Gabe and Sara agreed, and without Noah knowing, sent a copy of the book to Page Publishing and it was accepted.

“I was expecting them to say, it is a great idea, but have him work on this or just give him advice,” Gabe said. “A few weeks later they said we would like to publish this book.”

The second book in the series, Noah Tone Outbreak, has already been accepted.

“I wrote for a pretty long time, but the publishing process took a lot longer than I thought it would,” he said. “Throughout the book I was learning how to write better and better. I could see myself growing throughout the book. It was really interesting.

“The publishing part of the book wore on me,” he said. “I wanted the book to come out, and I didn’t like the waiting.

“It took longer to write the book, but I loved every step of the way,” he said. “It was a great feeling to have it published. Seeing all of that work in front of me, all coming back, it was a big deal.”

Noah Tone Plaque of Powers is available on Amazon, Google and Barnes and Noble and other sites. The book has been sold across the globe with sales in Australia, the United Kingdom and South America.

When he heard the book was accepted, and saw it print for the first time, the rest of the day was simply a dream, Noah said.

“I opened it, and I couldn’t say anything,” he said. “I took my book out, and all I could do was stare at it.

“My brother came down and told me the book was accepted,” Noah said. “I was like ‘Right, stop playing with me.’ It was like a dream that day. I was walking around the house the rest of the day, ‘Is this even happening?’ I couldn’t believe it.”

Noah Cotter is most at home when he is putting his thoughts on paper.

“We have to tell him to go to sleep, stop typing and stop reading,” Gabe said. “Obviously, he got it from his mom. I do not like writing and I do not like reading. I am creative mind wise, so he got something minimal from me. Sara is a good writer and she reads a lot, too. It is neat because all of his brothers and sister do good at reading and like to read, so this has been good to have them see this.”

The teenage author joined some impressive company in winning the honor, also awarded to young aspiring writers like William Allen White and Ernest Hemingway. The journalism school at the University of Kansas is named after White, the longtime Kansas newspaper man. Hemingway began his journalism career as a reporter for a Kansas City newspaper.