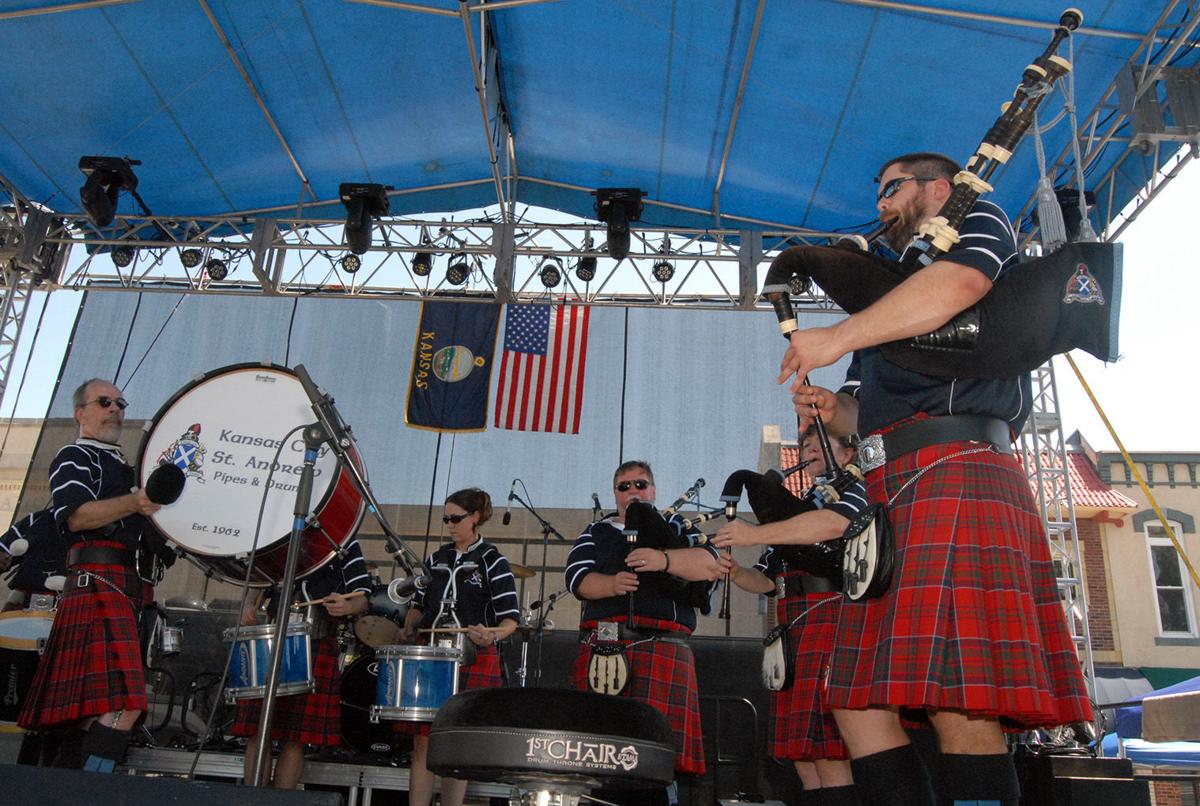 Members of the St. Andrews Pipes and Drums play some old Scottish tunes on the bagpipes. 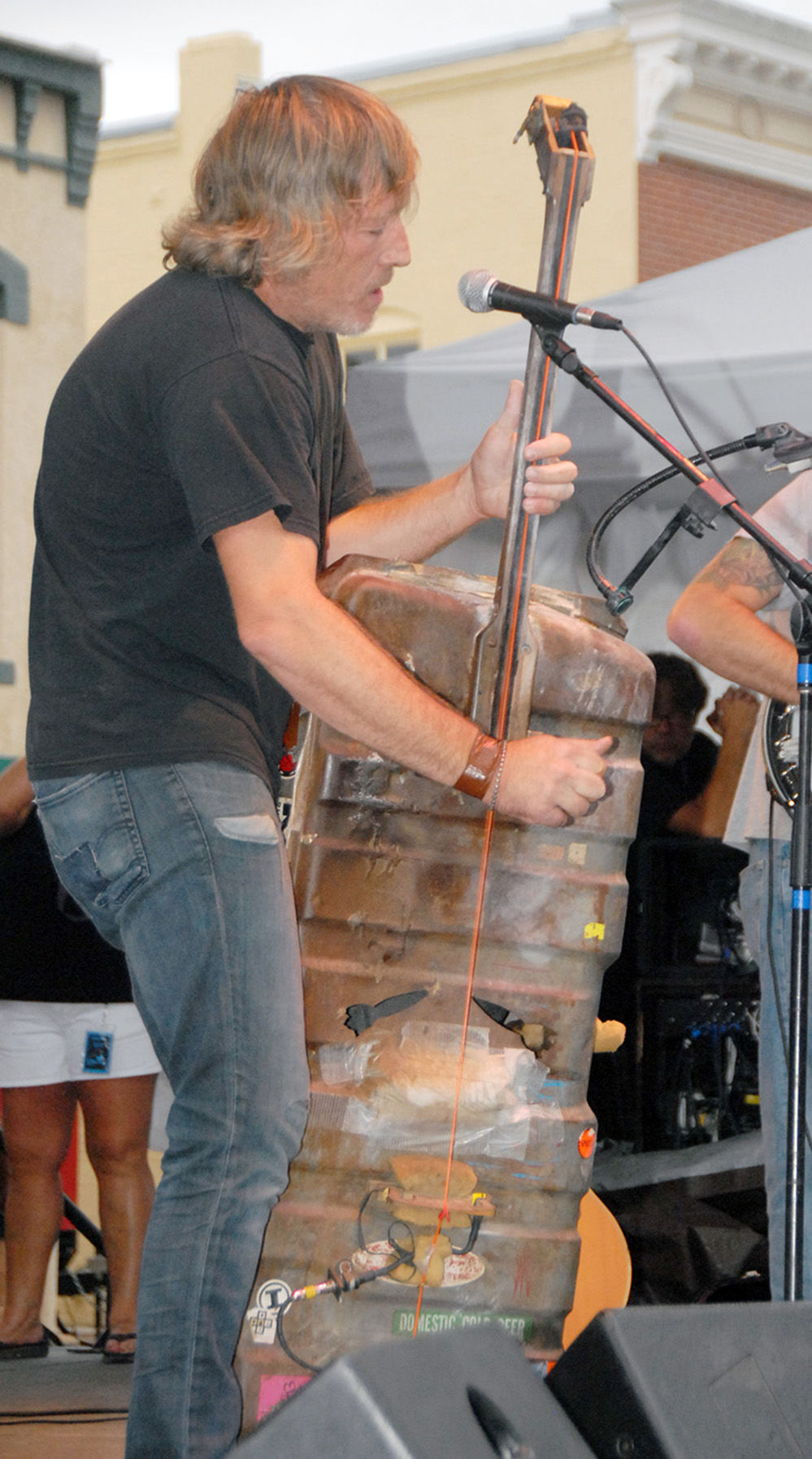 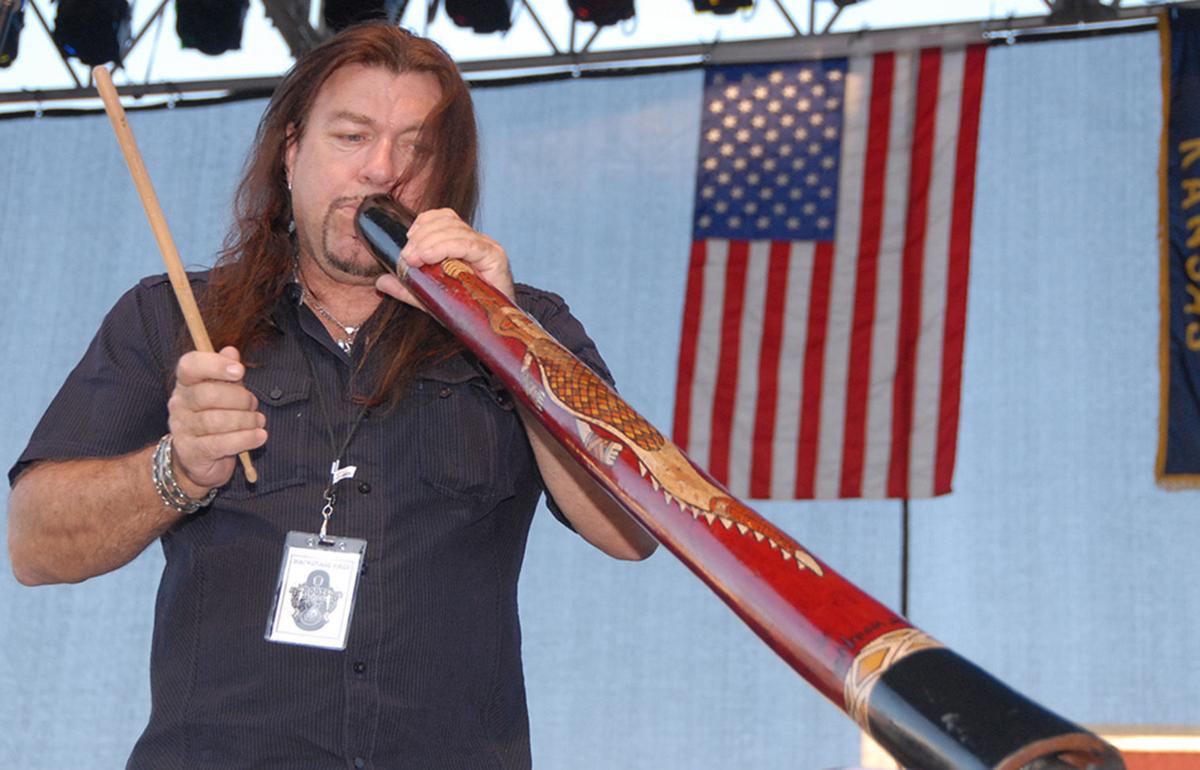 Harper plays the didgeridoo, a long wooden instrument from Australia. 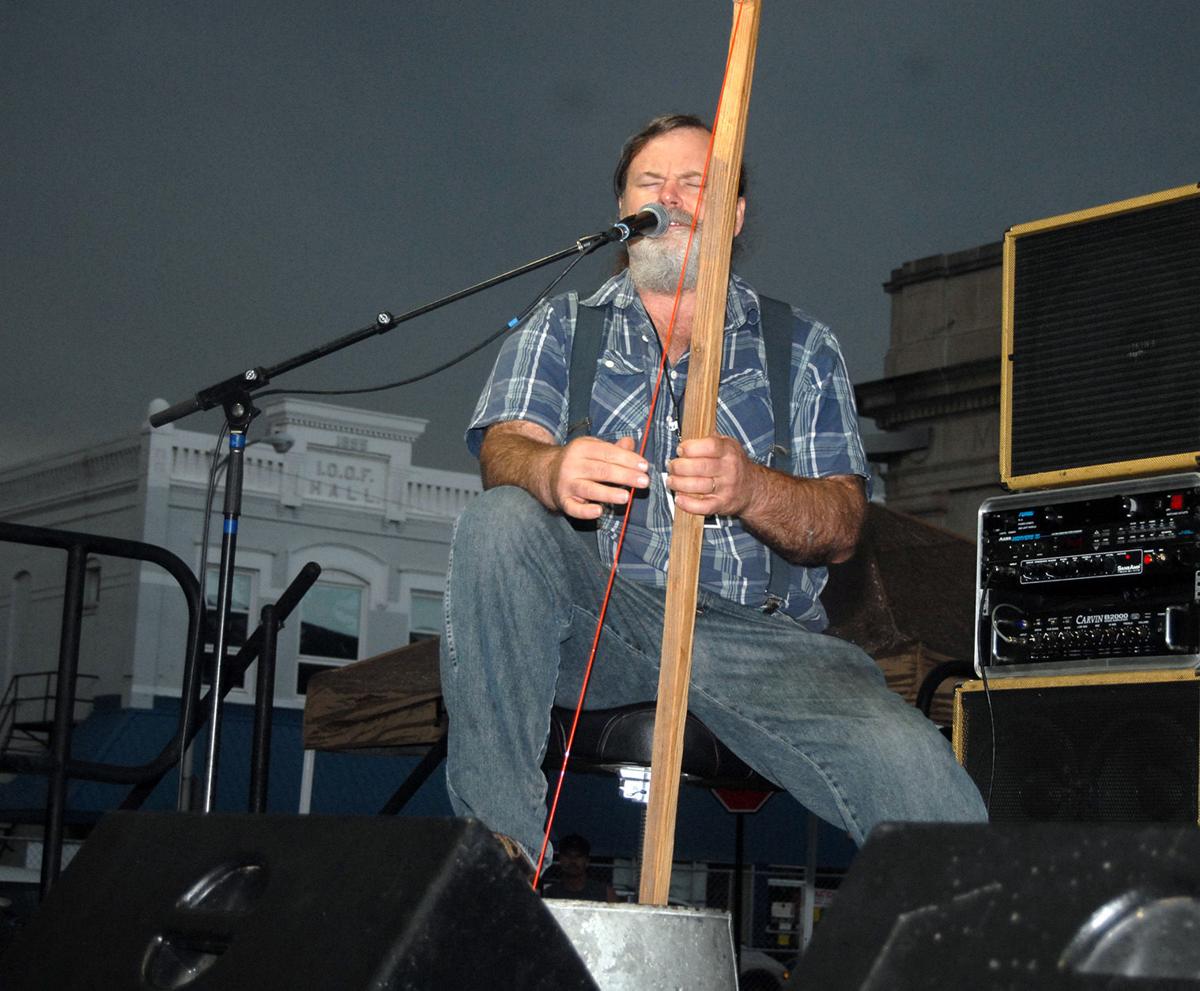 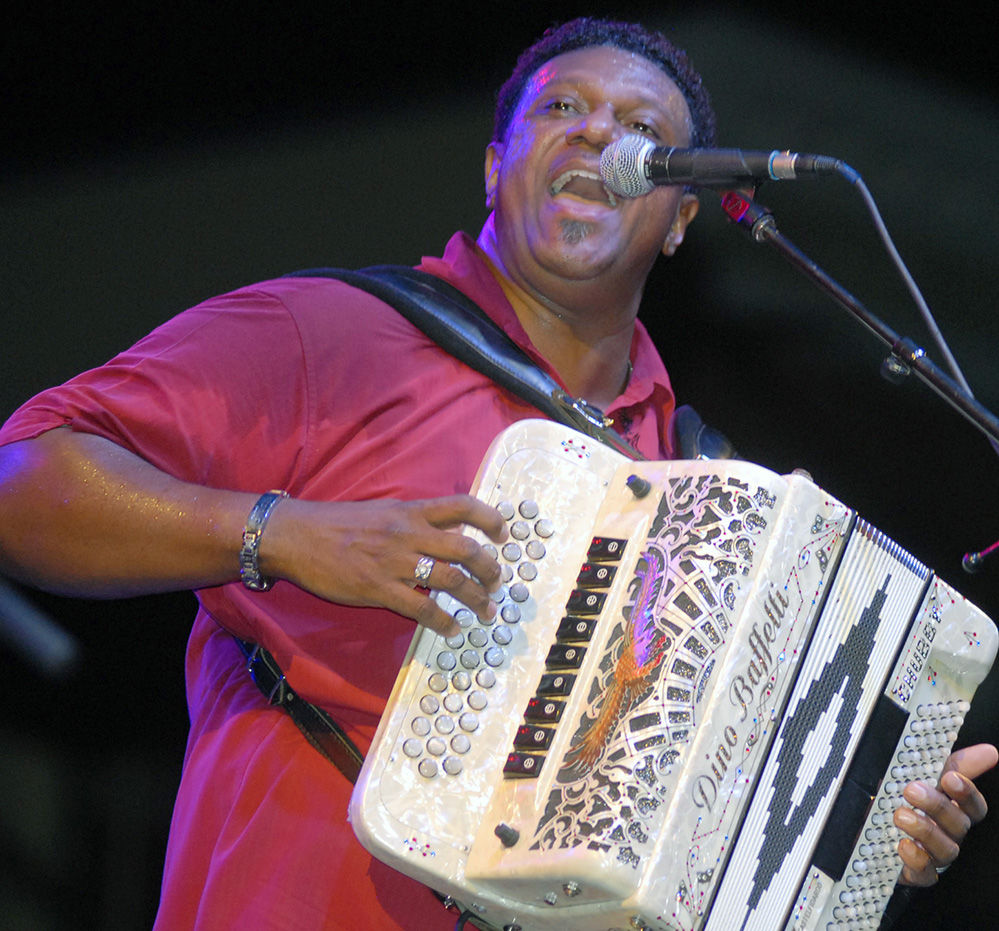 Chubby Carrier, of the Chubby Carrier and the Bayou Swamp Band, plays the accordion during a set at the Paola Roots Festival. 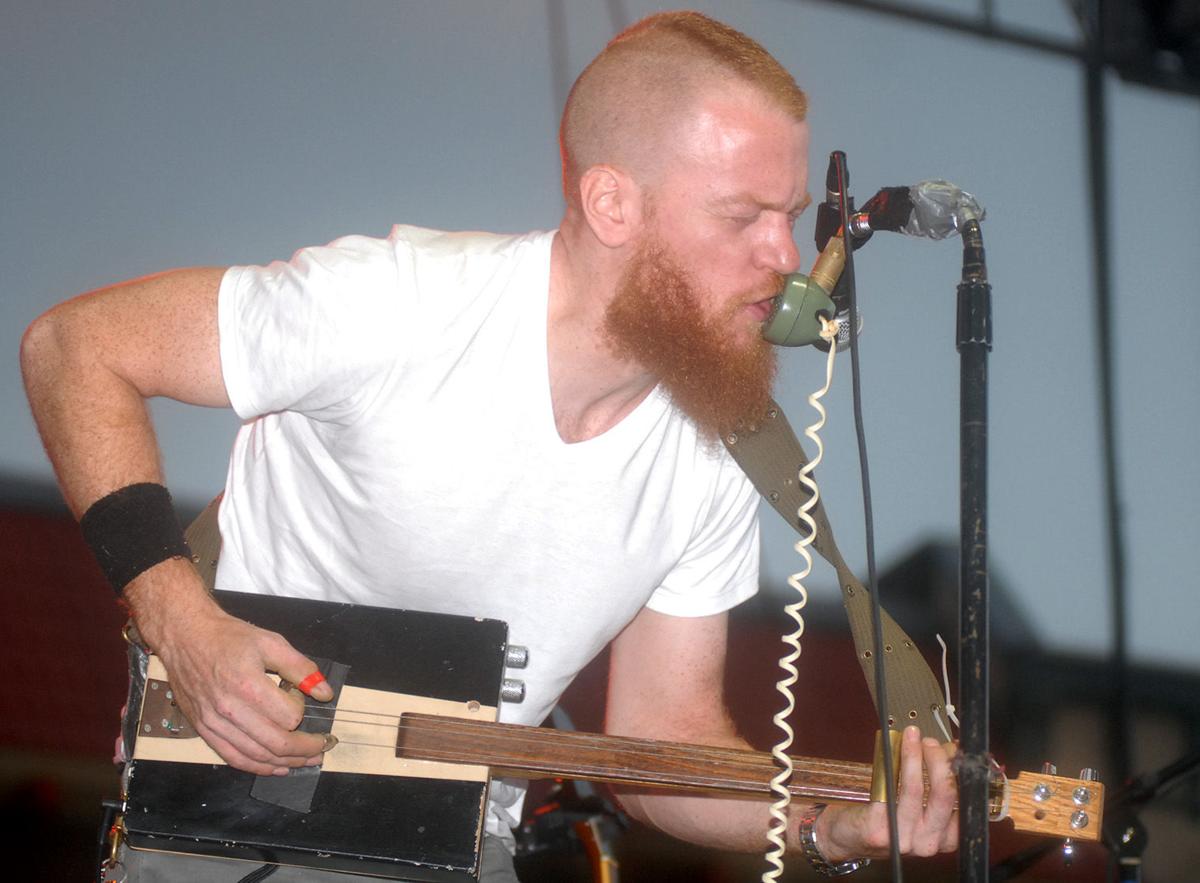 Ben Miller uses a rotary phone to add to his vocals and bluegrass sound. 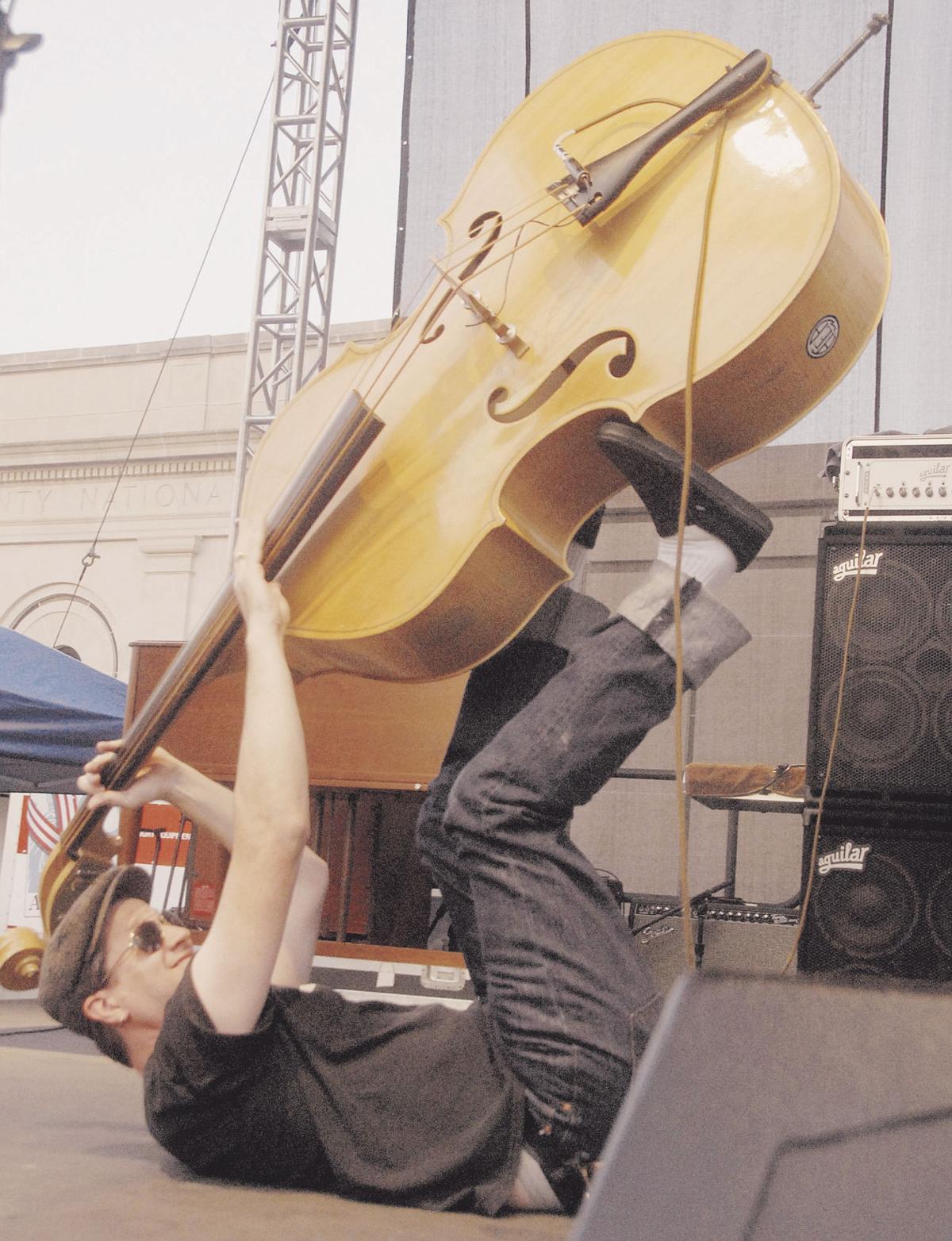 Charlie Johnson, upright bassist, lays down to play during a set from the Mezccal Brothers at the Paola Roots Festival.

Members of the St. Andrews Pipes and Drums play some old Scottish tunes on the bagpipes.

Harper plays the didgeridoo, a long wooden instrument from Australia.

Chubby Carrier, of the Chubby Carrier and the Bayou Swamp Band, plays the accordion during a set at the Paola Roots Festival.

Ben Miller uses a rotary phone to add to his vocals and bluegrass sound.

Charlie Johnson, upright bassist, lays down to play during a set from the Mezccal Brothers at the Paola Roots Festival.

PAOLA — More than 300 bands have performed on the Paola Roots Festival stage the last 30 years, playing all kinds of instruments.

There have been steel and bass guitars, banjos, cigar box guitars, saxophones, trumpets and drums, as well as more unique instruments like bagpipes and upright bass. There have even been harmonicas, accordions, washboards and spoons, didgeridoo and a gasoline tank homemade guitar.

As the Paola Roots Festival celebrates its 30th anniversary Friday, Aug. 23, and Saturday, Aug. 24, one can trace the roots back to a family barbecue reunion held at Wallace Park. The two-day event now draws thousands to the Paola Park Square.

To celebrate the 30th anniversary, The Republic is taking a walk down memory lane and a look back at some of the most unique instruments to be part of the festival.

Christopher Johnson of the Mezccal Brothers starts the Top 10 list of most unique instruments played at the Paola Roots Festival.

It is not just the upright bass, but how Johnson played it during the group’s set in an appearance at the festival.

Johnson laid with his back on the Paola Roots Festival stage and had his legs holding the instrument in the air and played it on his back just like that, rocking for the crowd back in 2013.

Hitting the list at No. 9 are the Ottawa Suzuki Strings players on the violin. The violin might not be one of the more unique instruments, but a stage full of them played by young musicians is a sound not captured by any other band.

The modern violin is about 400 years old, based on other stringed instruments dating back more than a 1,000 years.

No. 8 and No. 7 on the list features a pair of harmonica players: Brody Buster, a Paola native, and Louisburg native Luke Town.

Buster, who played at the Roots Festival, was a child prodigy on the harmonica and played with the legendary B.B. King.

Town, a country rocker singer and songwriter, played his guitar on stage and would pull out his harmonica. After whaling away on the instrument for four or five minutes, Town revealed his “look no harmonica” sound, removing his hands to shock the audience that he had actually been using his voice to recreate the sound of a harmonica

Town played at the Paola Roots Festival. He made appearances at the Paola Opry, the Ottawa Opry and Middle Creek Opry. While performing at the Ottawa Opry, Town opened for country stars like Eddie Rabbit and Dan Seals. Rabbit’s mother cried when she first heard Elvis Presley singing her son’s song “Kentucky Rain.”

Landing on the list at No. 5 are the bagpipes played by the Kansas City St. Andrews Pipes and Drums group in 2014. The sound harkens back to a simpler way of life, taking the audience on a trip to Scotland.

The Ben Miller Band takes two spots on the Top 10 list for most unique instruments played at the Paola Roots Festival. The bluegrass band is known for its unique instruments from thrift-shop guitars and banjos to the electric washboard played with spoons and a washtub.

Ben Miller is No. 4 on the list, singing through a rotary telephone to give his voice another dimension on a few of the band’s songs.

No. 3 on the list is Scott Leeper’s one-string washtub bass. They are some off-the-beat instruments, but instead of being gimmicks are more creative ways to capture the spirit of American bluegrass music in using what they had available.

No. 2 on the list of unique instruments is the didgeridoo played by Harper.

The didgeridoo is a long wooden instrument which plays some real “roots music.” Harper, who grew up in Australia, was influenced by Aborigines’ spirituality and culture similar to that of the American Natives and blended those for his own primitive, earthy blues sound that seemed to bellow from the center of the Earth.

Harper was named the No. 1 surprise band for a special section celebrating the 25th anniversary of the Paola Roots Festival. This year, for the 30th, he comes in at No. 2 for most unique instrument.

Topping the list at No. 1 for most unique instruments is Jeff Eaton’s homemade guitar “Stichgiver,” made from the gasoline tank from a 1978 Mercury Grand Marquis. Eaton played the guitar for Split Lip Rayfield, a band from Wichita. Split Lip Rayfield played at the Paola Roots Festival in 2012.

The main piece for the “Stichgiver” is the gasoline tank from the 1978 Marquis, but it is much more than that. Also making up the “one-of-a-kind” guitar include: a piece of hickory, a piece of a Weed-whacker line, a rubber bottle seal, popsicle sticks, a section of a yardstick, parts from a squeegee, a CB antenna spring, part of a ballpoint pen, a master link from a bicycle and pieces of scrap wood.