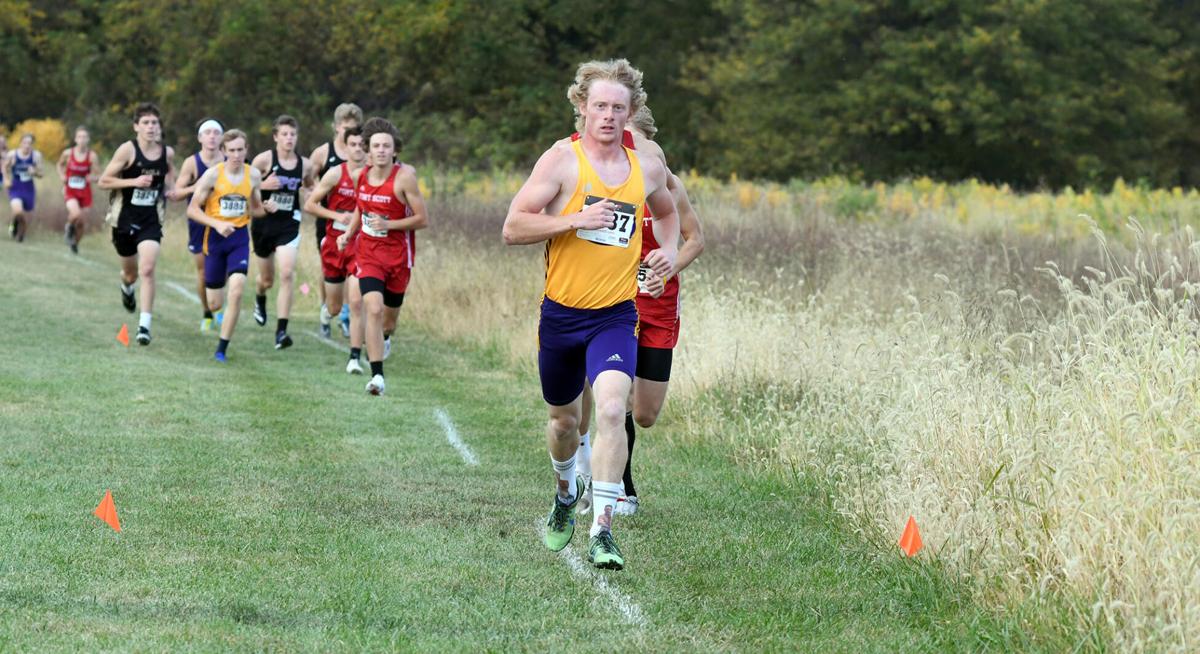 Spring Hill Bronco Tommy O’Leary sets the pace in the Louisburg Invitational. O’Leary, who never lost a race to an area runner this season, won the meet. He was named the Spotlight boys runner of the year.

Spring Hill Bronco Tommy O’Leary sets the pace in the Louisburg Invitational. O’Leary, who never lost a race to an area runner this season, won the meet. He was named the Spotlight boys runner of the year.

LOUISBURG — The Louisburg Wildcats qualified the boys team for state for the first time in school history, placing third in the Class 4A regional at Baldwin.

Seven of the Wildcats ran their season-best times in the history-making regional meet.

Carson Houchen of Louisburg ran down the top time in the area by one second, posting a time of 17 minutes 45 seconds for 10th place in the regional meet. He was 12th in the Frontier League meet at Ottawa.

Tommy O’Leary of Spring Hill, who placed fourth in the league meet to lead all area runners, opened the season with his best time of 17:46 in the Kansas City Metro Classic.

Kael Knittel of Spring Hill had the third-best time in the area with a time of 18:11 in the Louisburg Invitational. He placed seventh in the league.

Tanner Petillo of Paola and teammate Cutter Meade ran times of 18:29, landing them on the Spotlight first team. Petillo and Meade both turned in their best times of the season at the Class 4A regional meet in Baldwin. Meade placed 22nd in the league meet. Petillo was 26th.

Cade Holtzen was the third Louisburg Wildcat on the first team, running a time of 18:45 in the regional meet, placing 20th. He placed 20th in the league meet.

The Wildcats dominated the Spotlight second team with five of the seven runners from Louisburg. Hayden Ross, Caden Bradshaw, Leo Martin, Noah Cotter and Braden Bradshaw all ran their season-best times in the regional where the Wildcats punched their ticket for state.

Ryland O’Hanlon of Spring Hill ran a season-best time of 19:31 in the Kansas City Metro Classic. He placed 21st in the league meet.

Spring Hill Bronco Aidan Smith had a season-best time of 19:37 in the Kansas City Metro Classic. He was 28th in the league meet.

Luke Hebert of Osawatomie ran a time of 19:47 for honorable mention.

Trent Allen of Louisburg made the Spotlight team with a time of 19:47.

Gavin Carter of Paola ran a season-best time of 19:59.

Samuel Downum of Paola was honorable mention with a season-best time of 20:11.

Brayden Rockers made the list for the Paola Panthers with a time of 20:17.

Sam Farley represented the Osawatomie Trojans on the list with a season-best performance of 20:19.

Braden Branine of Louisburg turned in a season-best time of 20:34.

Sawyer Richardson of Louisburg made the list with a time 20:37.

Matthew Blackie of Paola ran a season-best time of 20:59.