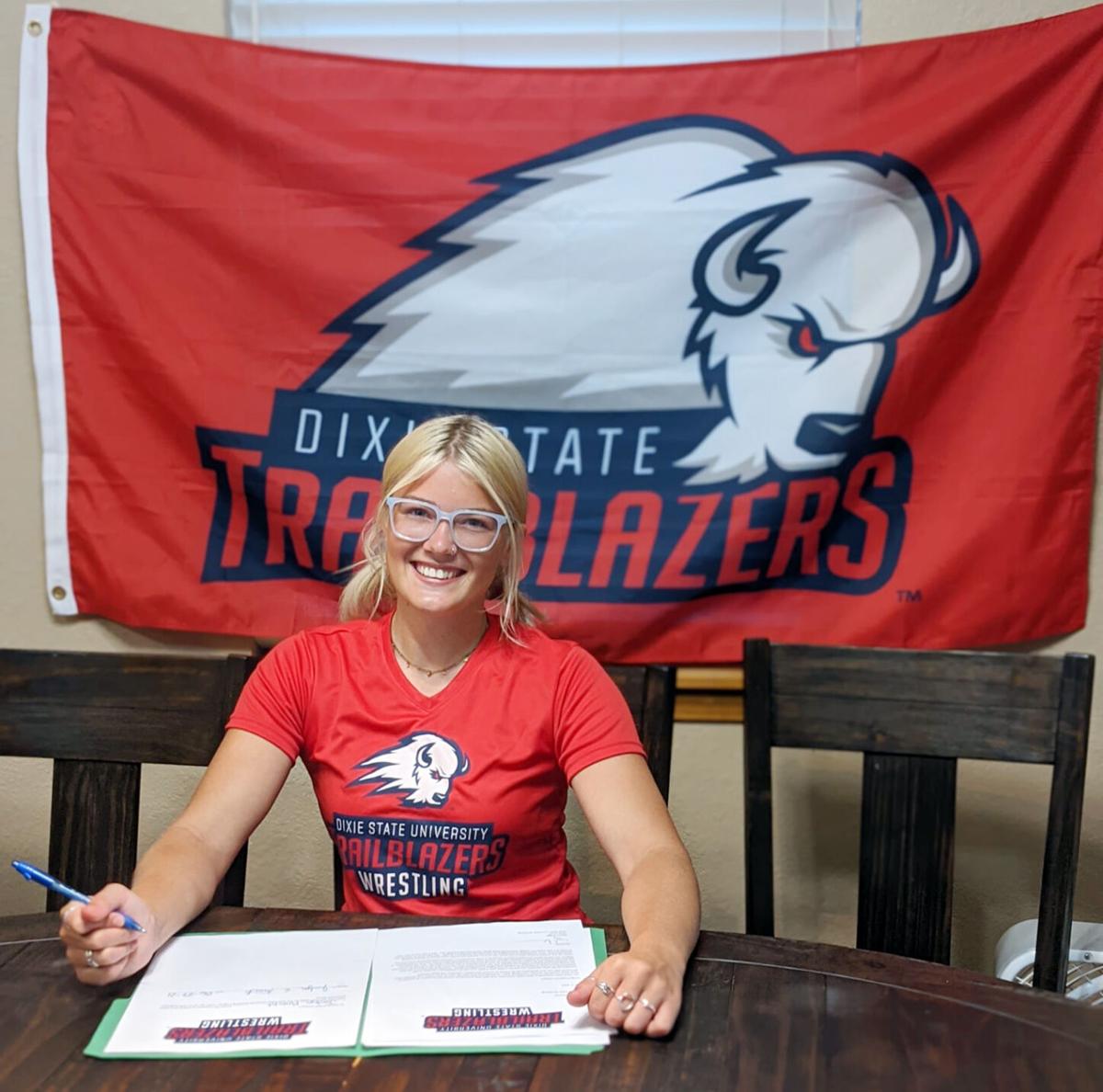 Jordyn Knecht, a Paola graduate, signed a national letter of intent to wrestle at Dixie State University in Utah. Knecht is a two-time, undefeated state champion. 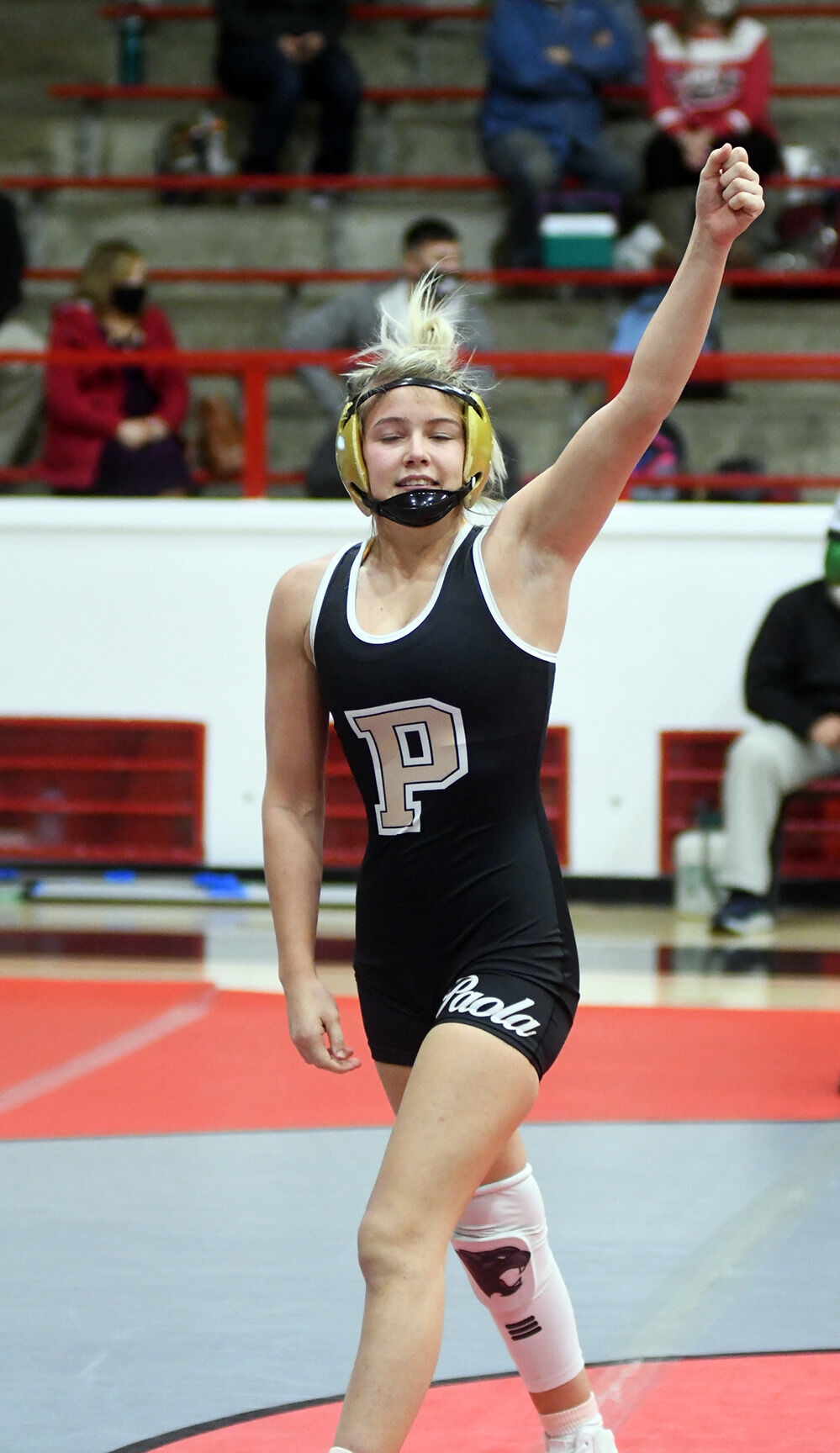 Jordyn Knecht raises her arm after one of her 66 high school victories. She led the Lady Panthers to back-to-back state team trophies. 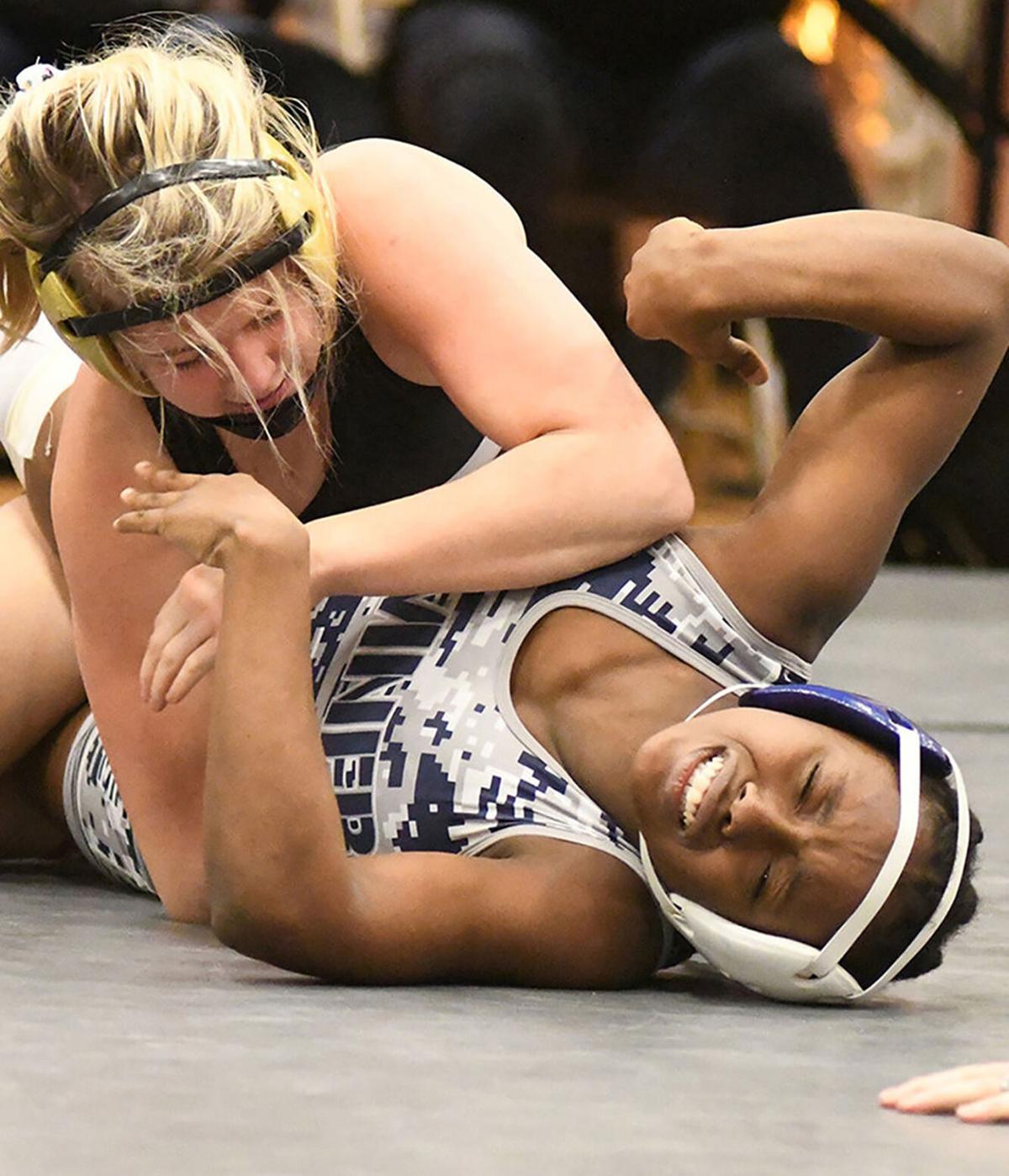 Jordyn Knecht of Paola drives an opponent onto her back for a pin combination. Knecht was 66-0 the last two seasons with 62 pins.

Jordyn Knecht, a Paola graduate, signed a national letter of intent to wrestle at Dixie State University in Utah. Knecht is a two-time, undefeated state champion.

Jordyn Knecht raises her arm after one of her 66 high school victories. She led the Lady Panthers to back-to-back state team trophies.

Jordyn Knecht of Paola drives an opponent onto her back for a pin combination. Knecht was 66-0 the last two seasons with 62 pins.

ST. GEORGE, Utah — Jordyn Knecht was not exactly surfing the internet for a college to wrestle for, but oddly enough, a surfing competition landed her at Dixie State University.

Knecht went to Utah for a wakeboard surfing competition and learned about Dixie State University. She is interested in becoming a dentist or orthodontist and discovered not only do they have a great dental program, but they also offer women’s wrestling. There is also a good chance the university will be a NCAA Division I program soon.

She made it official, signing a national letter of intent to wrestle for the Dixie State University Trailblazers.

“I am so excited to be a Trailblazer,” Knecht said. “Wrestling at the college level has been a dream of mine since I was little.

“I ultimately chose to become a Trailblazer after taking a trip to Utah for a wake surfing competition,” she said. “I fell in love with the area. I get to wrestle, but I will also never be bored because of all of the fun things to do there.”

Knecht drove through the campus and has visited with Dixie State wrestling coach Wayne Briggs.

“Coach Briggs has been amazing,” she said. “He makes me think of a great college career ahead of me.”

Knecht will compete for Dixie State at 123 pounds. She was a two-time state champion for the Paola Lady Panthers, leading the team to third place in the state two years in a row.

Knecht is a Top 25 Class of 2021 recruit in the nation. She won the 126-pound state title her senior season with a perfect record of 36-0. She was 3-0 in the state tournament with three pins in less than one minute.

Knecht was the Tri-County Spotlight Girls Wrestler of the Year two years in a row.

Knecht wrestled all four years of high school. She wrestled co-ed with the boys as a freshman and sophomore. She was a two-time state champion and a Frontier League placer.

Knecht placed fourth in the Frontier League tournament her freshman season, competing in the boys tournament.

In addition to wrestling for the Paola High School wrestling program, Knecht has been a member of the Paola Kids Club since she started.

She was sick her sophomore season and missed regionals, or many believe she would have not only qualified for state, but been a state placer.

Knecht has wrestled for the Kansas Women’s National Team and represented the United States. She was chosen to be on Team Kansas and compete in the inaugural Rouge Girls All-Star Classic against Missouri spotlight event held at Paola High School. Knecht was also in the first KSHSAA postseason tournament, competing in a regional event at Paola High School on her way to her first state championship.”

“Wrestling national and international, and wrestling both boys and girls, has made me excited about the future,” Knecht said. “Knowing that I have wrestled and done so much to be the best I can be, has given me a lot of confidence. I am so thankful for all of the people who have helped me get where I am today.”

“Jordyn is the face of the girls wrestling in my opinion,” Willard said. “She was known for wrestling boys until girls became official.”

Knecht was 26-9 in two seasons of co-ed wrestling, competing against the boys.

“When people talk about Paola wrestling in general her name always gets brought up,” Willard said. “Jordyn was a different kind of leader. She was not your vocal leader, but was able to lead and teach every girl we have in our program.”