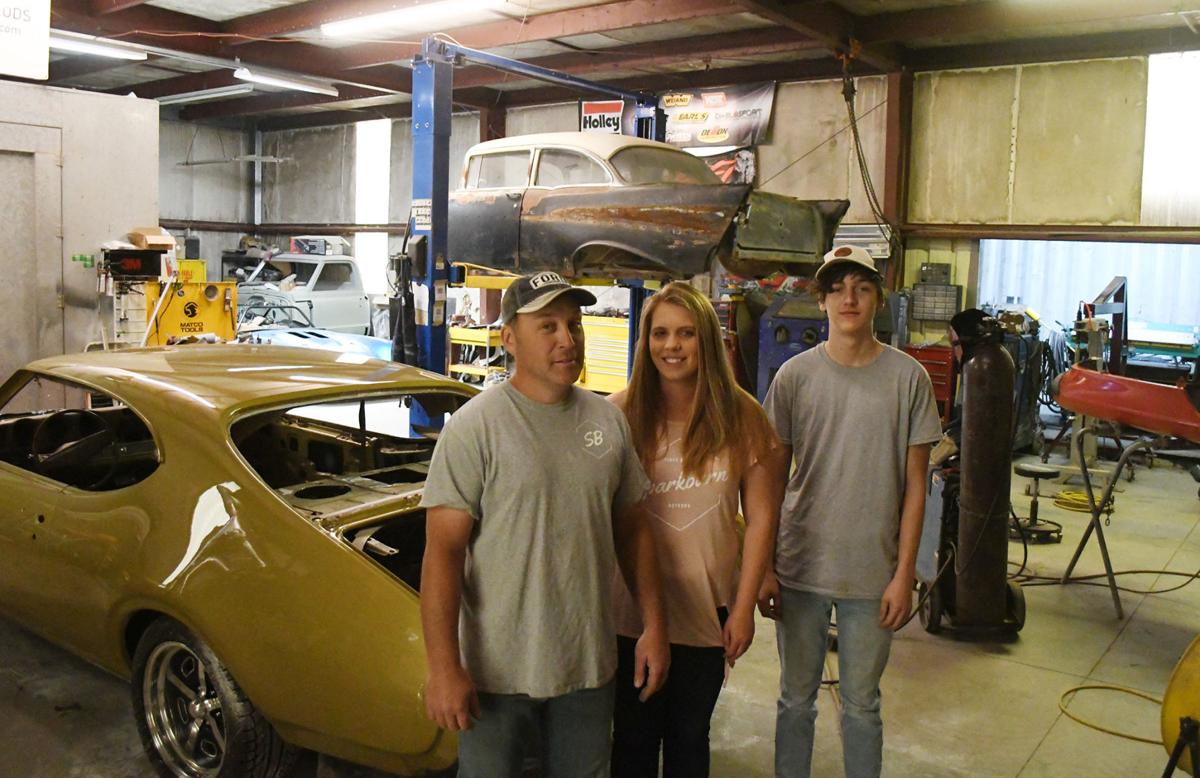 James Miller and his wife, Meisha, work in the shop with nephew Dylan Franklin from Texas. James is working on the 1969 Cutlass on the left and has been helping Dylan with a 1957 Chevrolet Bel Air Post on the rack in the back. Miller owns and operates Sparkburn Hotrods in rural Osawatomie. 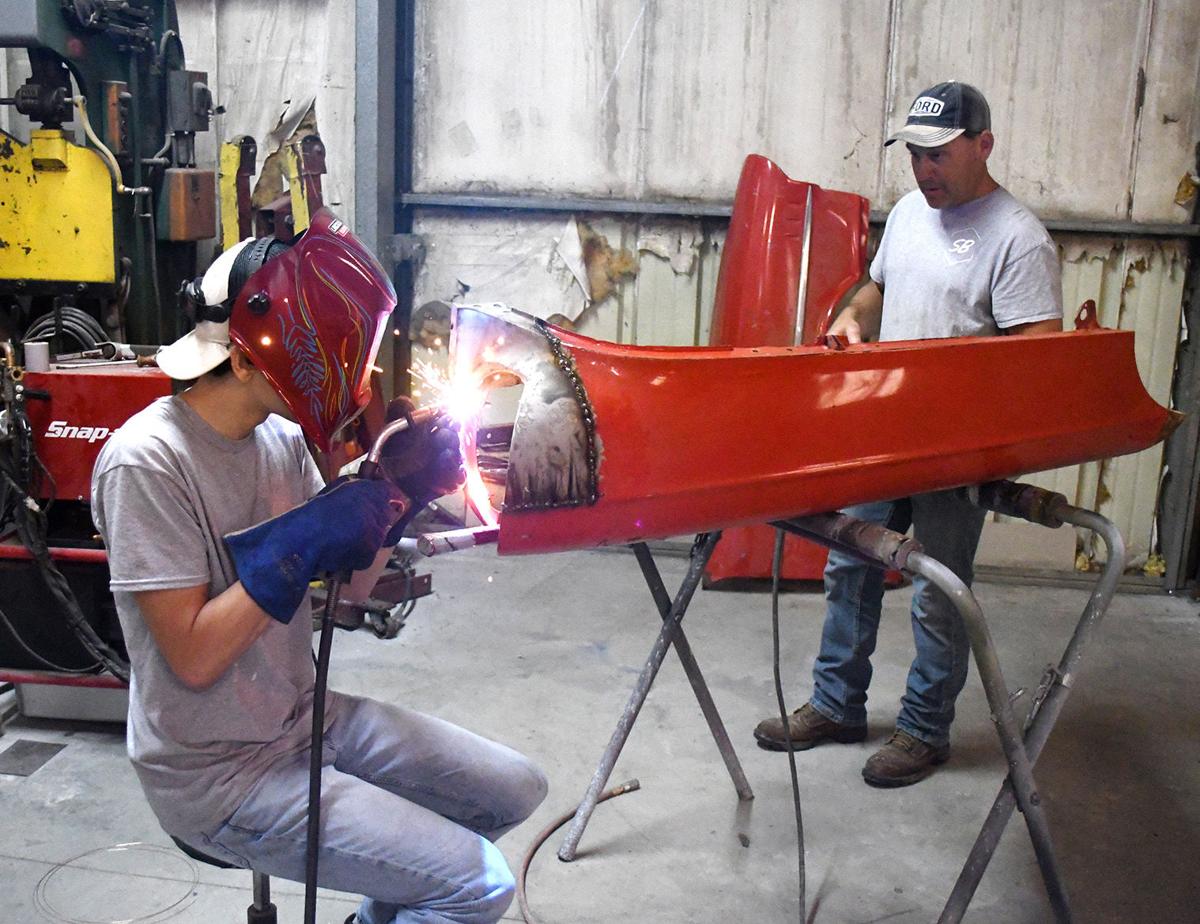 Dylan Franklin (left) and James Miller work on a fender for a 1957 Chevrolet Bel Air Post. The classic car was owned by James’ father, Chuck, and is being restored as a project car for Dylan.

James Miller and his wife, Meisha, work in the shop with nephew Dylan Franklin from Texas. James is working on the 1969 Cutlass on the left and has been helping Dylan with a 1957 Chevrolet Bel Air Post on the rack in the back. Miller owns and operates Sparkburn Hotrods in rural Osawatomie.

Dylan Franklin (left) and James Miller work on a fender for a 1957 Chevrolet Bel Air Post. The classic car was owned by James’ father, Chuck, and is being restored as a project car for Dylan.

OSAWATOMIE — Working on old cars has been a lifelong passion for James Miller.

Miller, who has a body shop in rural Osawatomie, especially loves old Fords. He has been working on cars for 30 years, and he did it for two years as a hobby. He also worked in collision repair for a few years.

Sparkburn Hotrods, the shop located right next to the house, has become his new home.

“I have always been into cars,” Miller said. “My grandpa was a mechanic. My dad was into cars.”

His grandfather Ed Miller worked as a mechanic for Ford Motor Company in Manhattan.

Chuck Miller, his father, was into drag racing and worked on cars in the arena.

James Miller is all about bringing rusty gold back to life.

“I enjoy it,” he said. “I typically bring home stuff that most people would throw away, according to everyone I know.”

He is currently working on a 1969 Cutlass for a customer. Miller is also helping his nephew, Dylan Franklin from Texas, restore a 1957 Chevrolet Bel Air Post.

“I thought it was a perfect car for what Dylan was wanting,” Miller said. “We will have it painted before he goes back to Texas this summer.”

Dylan, a sophomore in high school, is still learning the ropes in restoration, Miller said.

Miller worked at Kulture restorations in Gardner. He also was featured on the television show Gear Dogs with Nate Boyer.

Sparkburn Hotrods is currently working on a restoration project with Stacey David for the television show Gears.

“We have been in episodes where we picked up the Cheetah,” he said. “We will be in other episodes when we deliver it to them.”

Dylan was busy working on welding a piece for his 1957 Chevrolet. He saw too many holes on his first try and went back over it.

“You have to take your time, you don’t want to warp it,” Miller said. “The best way to see how you are doing on your weld is to shine a flash light on the back side of it. If you see light holes, you need to do more welding.”

“He is just learning right now,” Miller said. “That is how you learn.”

Miller said he loves the challenge.

“They are all tough to work on,” he said. “They all have inherent issues, whether it is finding parts or whatever the case may be.”

Miller was busy making a piece of metal to fill in on the 1957 Chevrolet.

“I am making this or we have to buy a whole new panel,” Miller said. “He is on a tight budget. I am making a lot of this stuff just so we can save money for him and actually see it through and drive it to high school.”

The 1957 Chevrolet is a small block, Miller said. They were looking for a four-speed for it.

Some of the classic vehicles on Miller’s wish list are a 1937 Ford and a 1955 Ford F-100 truck. No matter if he is around town, relaxing at home or in the shop, there is a good chance Miler has a Ford hat on.

“If you can’t tell by the hat, he is a Ford guy,” Miller’s wife Meisha said.Miller is proud to be an American and loves his Fords.“I am a Ford guy,” he said. “They are one of the few made and owned by Americans.”

“The neat thing is they work with local police officers,” Miller said. “They are part of the mentoring group. It is a great organization.

“We are trying to keep the interest in old cars alive with younger people,” he said. “You know, put down your cell phone, pick up a tool and have some fun, use your imagination.”

“Dylan is a rare kid,” he said. “He is out here working with his hands and not on his cell phone.

“I learned how to do this on my own,” Miller said. “I learned from hard knocks. I just enjoy doing it. We just restore whatever someone wants to restore.”