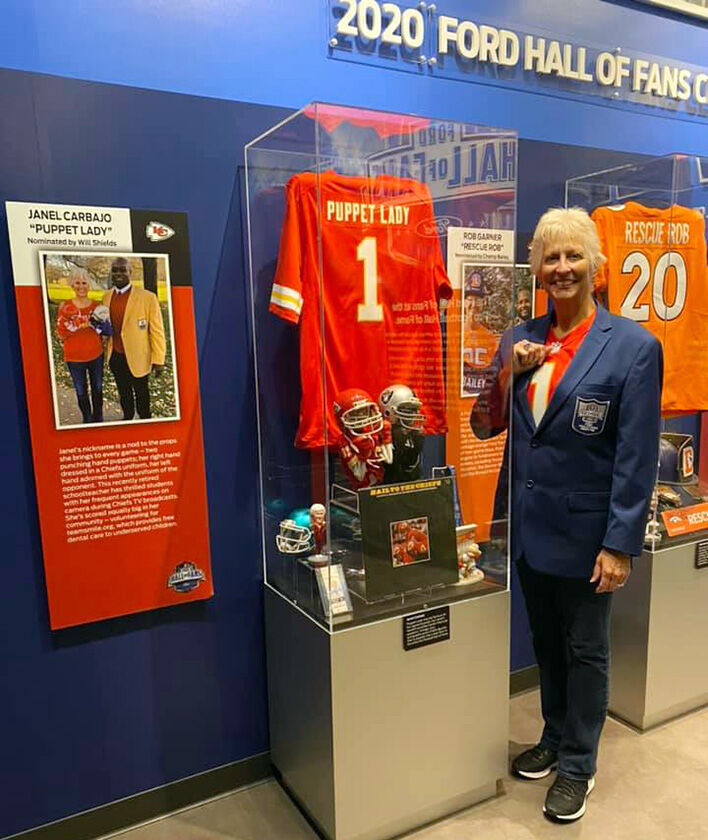 Janel Carbajo, known in Chiefs Kingdom as “The Puppet Lady,” was enshrined in the Ford Hall of Fans in Canton, Ohio, on Wednesday, Sept. 9. 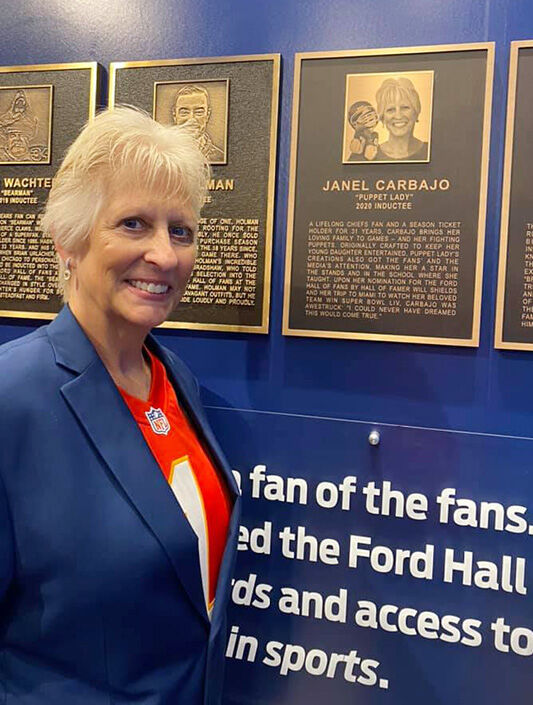 Janel Carbajo of Spring Hill, a lifetime Kansas City Chiefs fan, stands next to her plaque which will hang forever in the Ford Hall of Fans.

Janel Carbajo, known in Chiefs Kingdom as “The Puppet Lady,” was enshrined in the Ford Hall of Fans in Canton, Ohio, on Wednesday, Sept. 9.

Janel Carbajo of Spring Hill, a lifetime Kansas City Chiefs fan, stands next to her plaque which will hang forever in the Ford Hall of Fans.

CANTON — It is official. Janel Carbajo of Spring Hill, known across the Kansas City Chiefs Kingdom as the “Puppet Lady,” was enshrined in the Ford Hall of Fans at the Professional Football Hall of Fame in Canton, Ohio.

She was presented with her Ford Hall of Fans class of 2020 ring and blue blazer during her induction Wednesday, Sept. 9.

Carbajo was shown her display case and plaque. Her case will be on display in Canton for one year, and the plaque will hang there forever.

“I saw the display case and I had tears,” Carbajo said. “Getting the ring put on my finger and being presented with the jacket was pretty darn cool.”

She became the “Puppet Lady” nearly three decades ago.

Janel was dating Tom, and their standing date was Sunday afternoon with the Kansas City Chiefs at Arrowhead Stadium.

The couple went to a Christmas party and won a Sylvester Stallone puppet as a White Elephant gag gift.

“We took it to the game with us basically as a toy to help keep our oldest daughter occupied while at the game,” Janel said. “We had a Chiefs mini helmet that Tom put on it so it was his idea to get another puppet and the opposing team helmet and that is how it all began.”

Now, Janel and her White Elephant gift are enshrined in the Ford Hall of Fans, representing the Kansas City Chiefs Kingdom.

“I wasn’t exactly sure what to expect,” Carbjao said. “I really thought it was going to be next year.

“We did not have time to see the entire hall of fame,” she said. “We were kept pretty busy. So I am going back in a few weeks with my mom and dad.”

Carbajo got the royal treatment at the Professional Football Hall of Fame, receiving a private tour of the museum’s vault with her husband Tom.

“We got a tour they do not give the general public because it would cost $2,000,” she said. “We got to see all of the Kansas City Chiefs footballs and jerseys in their archives. It felt really special to see Patrick Mahomes’ and Tom Brady’s draft cards.

The Professional Football Hall of Fame induction ceremony was postponed until next year due to COVID-19. Carbajo will be going back for that enshrinement at which time she will get to give her speech at Canton.

Carbajo was selected as one of three finalists for the Ford Hall of Fans in January, winning her trip to the Super Bowl to see her Kansas City Chiefs. Janel and her husband Tom flew out to Miami and watched the team capture the Super Bowl for the first time in 50 years.

David Baker, the president and executive director of the Pro Football Hall of Fame, was there for the enshrinement ceremony. Baker was there in January, knocking on Carbajo’s door at the Hyatt Regency to let her know she had been selected.

Carbajo has been going to Kansas City Chiefs games since her first date at Arrowhead with her boyfriend Tom. It has been a standing date for the two since they got married.

Three decades later it has become a family affair for Janel and Tom.

“I have always considered going to the Kansas City Chiefs game as my standing date with my husband,” Janel said. “Once our children came along, we acquired more tickets for them to attend with us. It has been a family affair ever since.