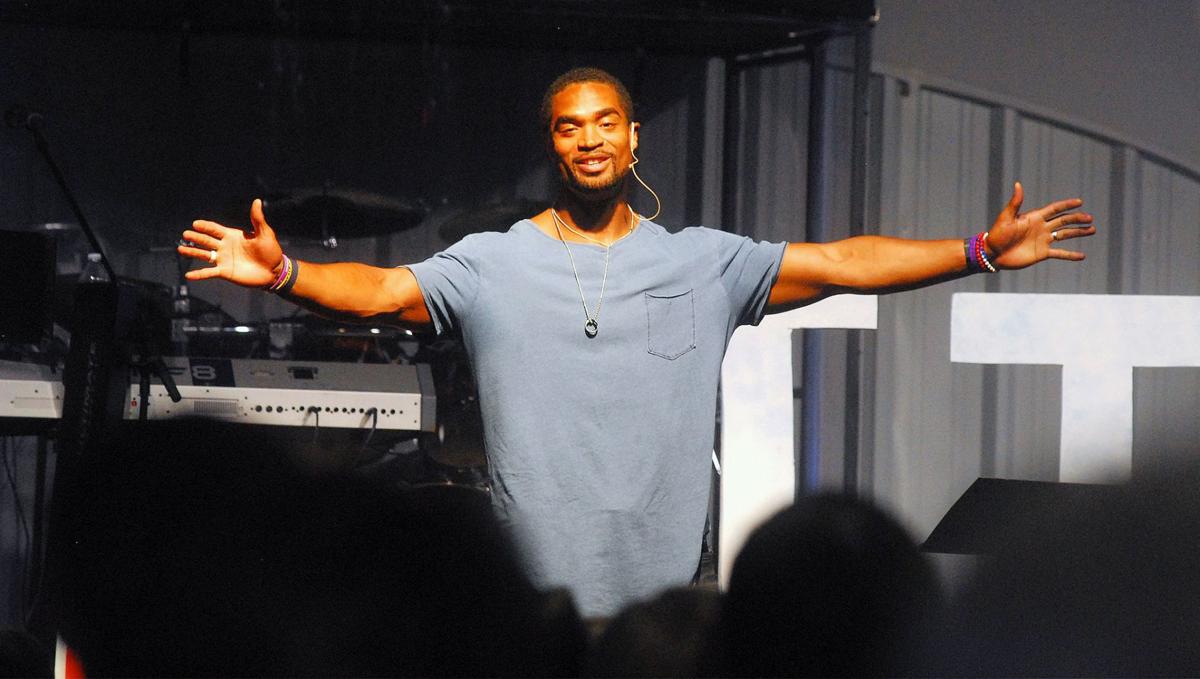 Darrell Stuckey, a former San Diego Charger, shares his walk of faith during Sunday morning services at Living Proof Church in rural Paola. Stuckey was a special teams captain for the Chargers for four seasons. 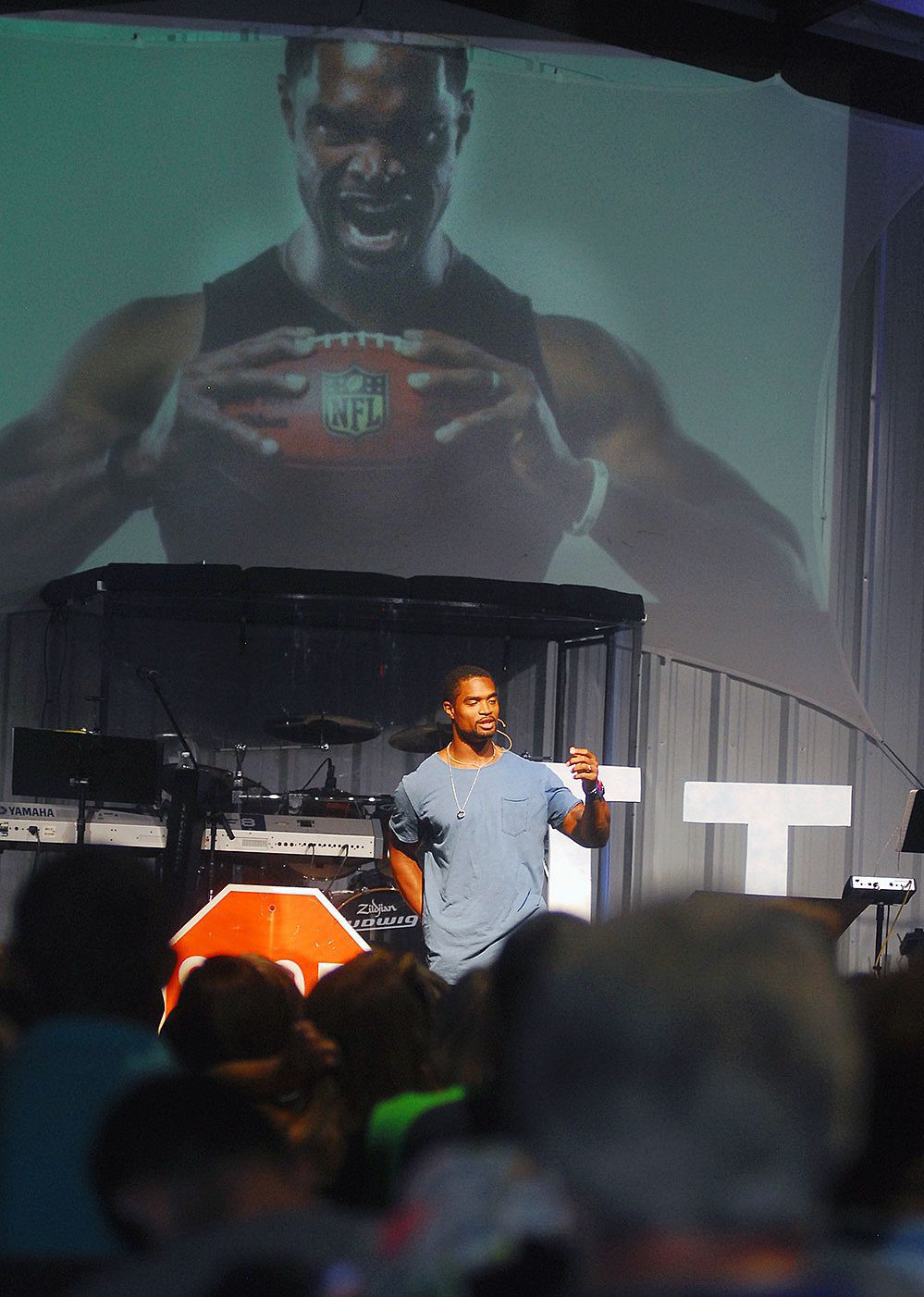 With a huge projection of himself from his NFL football days, Darrell Stuckey gives his testimony at Living Proof Church.

Darrell Stuckey, a former San Diego Charger, shares his walk of faith during Sunday morning services at Living Proof Church in rural Paola. Stuckey was a special teams captain for the Chargers for four seasons.

With a huge projection of himself from his NFL football days, Darrell Stuckey gives his testimony at Living Proof Church.

Like all of us, he stumbled along the way, but the Lord sent a coach or a teammate to help pick him back up.

Stuckey, who played for the San Diego Chargers, gave his testimony in his walk of faith during Sunday morning services at Living Proof Church in rural Paola.

He said a lot of people do good to please the Lord. While that is good, it is not what God is calling us to do.

We are called to have trust, Stuckey said.

Stuckey and a friend were trying to get their name in a hall of fame by breaking a vertical obstacle course record.

The two were also blind-folded.

Directing them where to go was a 6-year-old boy at the bottom.

“I heard the Lord’s voice loud and clear,” Stukey said.

“How dare you,” he heard the Lord say.

“I was putting my life in the hands of a 6-year-old telling me where to put my hands, where to sit, where to do everything.”

“How dare you,” he heard the Lord say again.

“How many times does the Lord call us to trust in Him,” Stuckey said. “Reaching the top meant a lot to me. But, it gave me clarity.”

Stuckey had never given his trust to the Lord. He heard a voice calling, but he had never made the leap.

But here he was, afraid of heights, with his trust in a 6-year-old boy.

Stuckey knew the Lord was right and he put his trust in Him.

All we have to do is pray, Stuckey said. God hears our prayers.

“A prayer is like a baby’s cry,” he said. “A baby depends on us and cries out to us. Regardless of what we are doing, a baby will cry out to us until we figure out what they need. We forget about that as we grow up and pray out to God. He knows who we are and what we need when we cry out to Him.”

Stuckey grew up in Kansas, graduating from Washington High School.

Darrell proposed to his wife before the National Football League Draft, taking out a loan for the ring.

He was drafted by the San Diego Chargers where he was a special teams captain for four years and played safety.

He created the “Living4One” organization to help others realize they were created to make the world a better place, living for Jesus.

When he was little, Stuckey did not get to play a lot of sports because he would overheat and his body would adjust and re-set, causing him to faint.

He was finally cleared to play sports when he was 9 years old.

“I played flag football and moved up to tackle football the next year,” Stuckey said. “It was the first time in my life, on the football field, where I felt like I belonged.

“I had a lot of energy and sports gave me focus,” he said. “Without focus and purpose you would wither away.”

He was raised by a single mother, Michelle Foulks, who with the help of her mother, taught him the Lord was the reason for everything.

This love for God was the foundation for his life, Stuckey said.

No matter what was going on in his life, he knew the Lord was close.

“The most important thing you can do as a parent is lead your child to God,” Stuckey said. “No matter how good your child is, if they do not have God, you are going to worry.

“The church became my father,” he said. “My mother and grandmother were there when I needed them.”

Stuckey, like all of us, made good decisions, and some bad ones.

When he took a step in the wrong direction, the Lord sent someone to lead him back to the right path.

“Every time someone made a bad decision in my life or influenced me the wrong way, God found a way to send someone to my life to mold me and shape me,” Stuckey said.

“No one has to teach us how to bond with our mother,” he said. “But, if you think about it, the father is our first relationship where we learn how to trust because the father has to earn the trust of the baby. The father molds us. God found a way to put people in my life to keep my faith and my trust in Him.”

Playing baseball one summer, he made friends with a teammate and stayed with them from time to time.

Stuckey came to see the family struggle, realizing he was not alone.

He also saw the little ways the family made sure their son had what he needed to succeed.

“I wondered why they drove such a big car,” he said. “In the back seat the father had a bucket of baseballs and a bag of bats.

“If they ever passed a baseball field that wasn’t being used, they would stop and hit a bucket of balls,” Stuckey said. “I used to pray we wouldn’t pass one because I was tired. The reality is the sacrifice the father made for the son is big. That is that faith being built. It is an example of God’s love for us.”

Living in California, he did not get to see the beauty of the Lord’s creation every day.

“Sometimes it is great at 7:30 in the morning to just go for a walk and see the birds and the trees,” he said. “It is beautiful. It reminded me of peace.

When he was drafted, his wife was in graduate school in Kansas and he was in California with the Chargers.

It was a difficult time for the couple, he said, but they remained close through prayer.

“We talked every night on the phone and prayed together,” he said.

Being a father of three today, Stuckey said he looks back on what his mother did in awe and realized the many sacrifices his mother made.

“I am married and we have kids, I cannot imagine raising children myself,” he said. “My mother had to give a part of herself up to make sure we had what we needed.”

What do you mean former charger. Is he still on the team?

Good piece of information related to Lord you like to told here. I think we should read such article to close the Lord. After exploring this website i got a lot of articles which have public related to issue. Every student must take a look of www.republic-online.com to have good information.