You are the owner of this article.
Edit Article Add New Article
You have permission to edit this article.
Edit
News
Announcements
Voices
Sports
Obituaries
Special Sections
Multimedia
Classifieds
Contests
Info
1 of 3 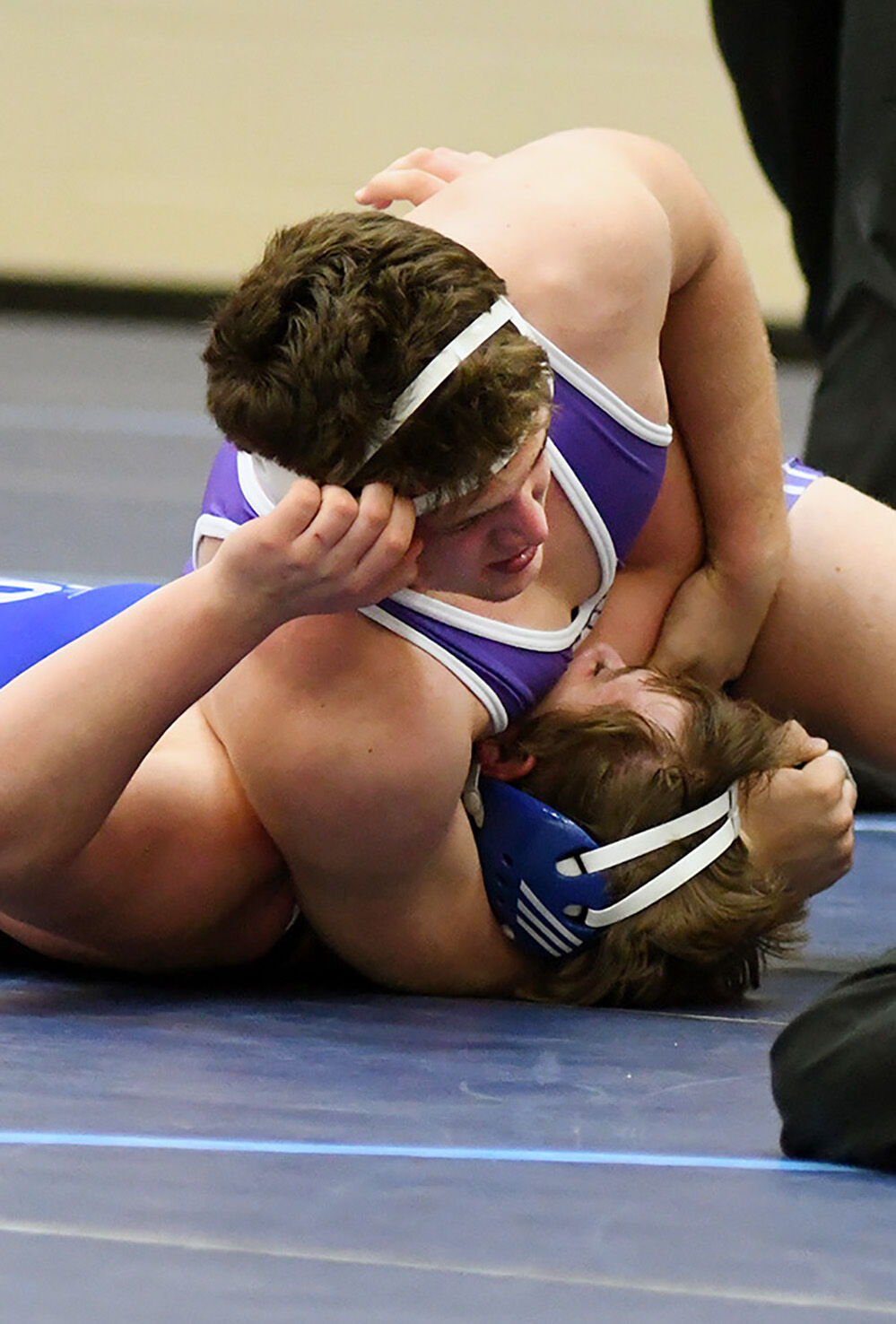 Alec Younggren of Louisburg uses an arm lock on an opponent earlier this season. He placed second in the state at 220 pounds. 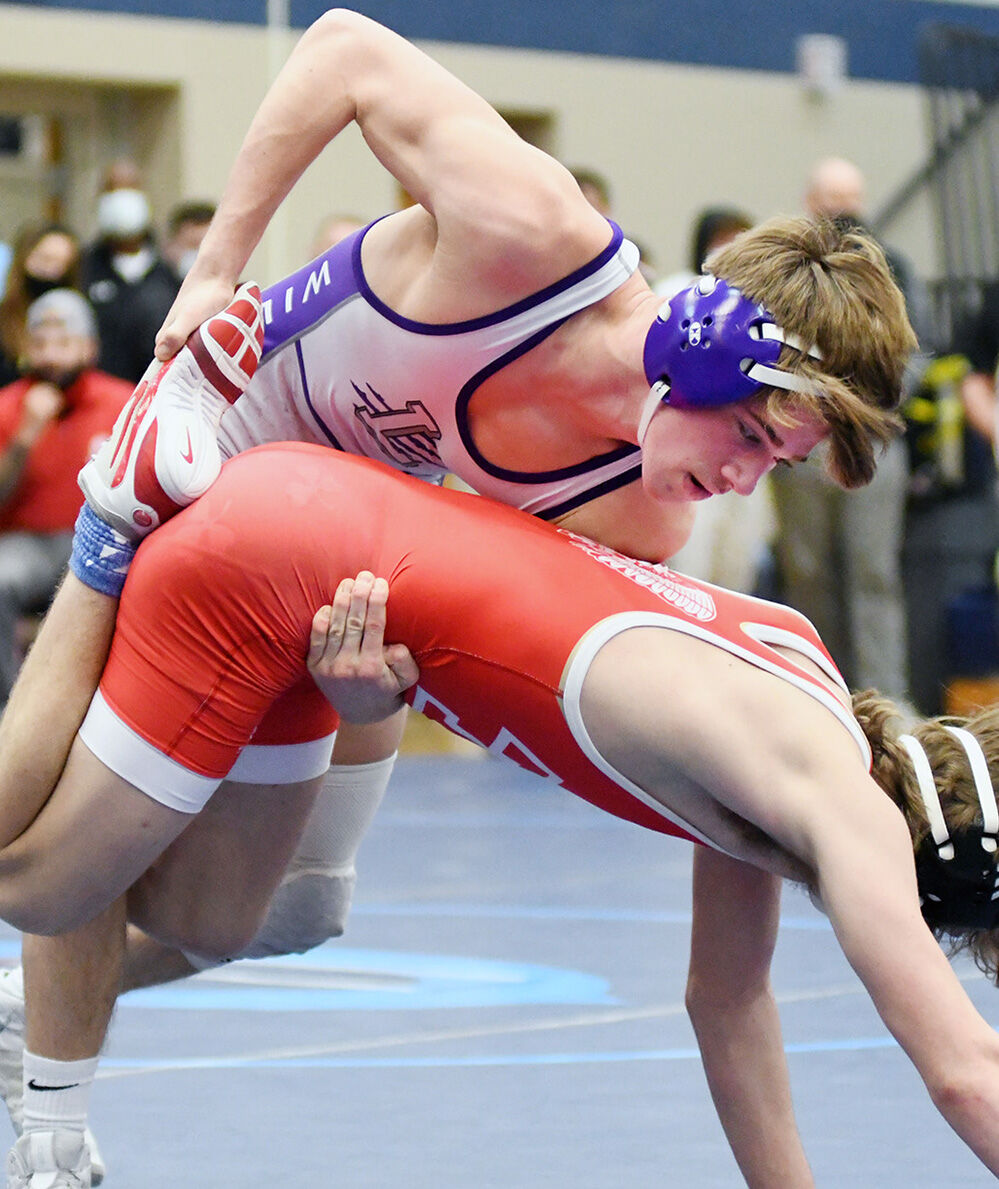 Wildcat Cade Holtzen takes an opponent to the mat. Holtzen ended his high school career with a victory, placing third in the state at 132 pounds. 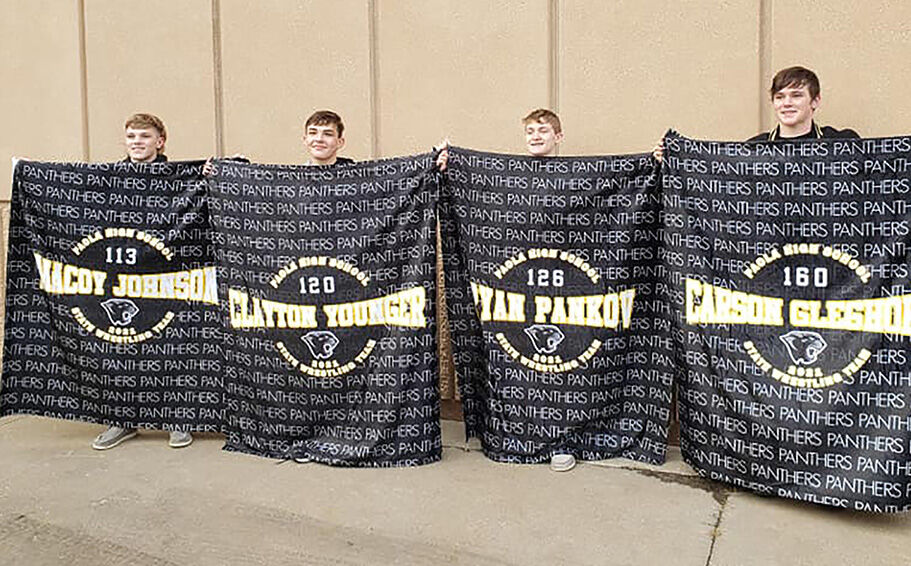 Paola wrestlers Macoy Johnson, Clayton Younger, Ryan Pankov and Carson Gleghorn pose for pictures with blankets made for them, prior to leaving to compete in the state wrestling tournament.

Alec Younggren of Louisburg uses an arm lock on an opponent earlier this season. He placed second in the state at 220 pounds.

Wildcat Cade Holtzen takes an opponent to the mat. Holtzen ended his high school career with a victory, placing third in the state at 132 pounds.

Paola wrestlers Macoy Johnson, Clayton Younger, Ryan Pankov and Carson Gleghorn pose for pictures with blankets made for them, prior to leaving to compete in the state wrestling tournament.

Younggren placed second at 220 pounds and Holtzen was third at 132 pounds at the Kansas State High School Class 4A Boys State Tournament in Salina on Saturday, Feb. 27.

“State is bittersweet, and every year it’s an emotional event,” Louisburg coach Bobby Bovaird said. “Seniors wrestle their last matches, some kids fall short of their goals, hearts are broken, and more. Cade and Alec definitely gave it their best shots. I wish we’d been able to get their teammate Ryan Owens there, but he ran into some very tough competition at substate.”

Younggren was 2-1 at state with a decision and a pin. Younggren, 37-1, did not lose a match until the state championship bout. He lost a 9-5 decision against Cayden Winter, 22-0, of Andale.

Younggren opened with an 8-2 decision against Dexter Dautel of Goodland. He advanced to the finals with a pin against Keegan McDonald of Clay Center.

Younggren was the district champion, regional champion and substate champion. He won the 100th match of his high school career during regionals.

“Alec has been a great addition to the program, that’s for sure,” Bovaird said. “He fell right in step with the Wildcat wrestling philosophy and had an immediate influence on his teammates. Pound-for-pound, he’s one of the strongest wrestlers I’ve ever coached. He’s like a bull, tough to move and unstoppable when he attacks. He’s got an unparalleled work ethic and a fierce sense of competitiveness. Combine all that with his wrestling knowledge, and he was bound to be a contender for a state title.

“While he fell short of his goal of being a state champion, he finished his season 37-1,” he said. “No one touched him until state. Before his quarterfinals match, he’d only been to the 3rd period one time, against a 5A fifth-place finisher from Shawnee Heights. My heart broke for him in that finals match because I knew how badly he wanted it and how much work he’d put into it.”

Holtzen, the all-time win leader at Louisburg, went out with a win for the Wildcats. He scored a 7-2 decision against AJ Furnish of Andale in the third-place match at 132 pounds.

The Louisburg senior was selected to read the “Wrestler’s Creed” prior to the start of the state tournament. Holtzen is a three-time state placer for the Wildcats.

Holtzen, 38-2, opened the tournament with a 4-2 decision against Kaiser Pelland of Pratt. He was pinned by Chadwick Stahl of Mulvane in the semifinals. Holtzen bounced back with a 2-0 decision against Zach Rohrbough of Scott City to advance to the third place match.

Holtzen dedicated his state performances to his grandfather, C.D. Holtzen, who recently passed away. Holtzen was 3-1 at state with three decisions, running his all-time win record to 155.

“Cade was one of the first Louisburg wrestlers I met when I got here in 2011,” Bovaird said. “Over the past 10 years, I’ve formed a bond with that young man that has taught me more than he realizes. I’m the coach I am today due in part to my relationship with him.

“Now that he’s finished his high school wrestling career, I’m nothing but grateful to him and proud of him,” Bovaird said. “After his third place match, I told him that 99 percent of people would have shrugged their shoulders and given far less than their best after losing a heart-breaking semi-final match like he did.”

It was a season that started with uncertainty due to concerns about COVID-19, Bovaird said. Having the chance to compete was the victory in 2021.

“This year has been a whirlwind, and while we could have been in a position where we remember it for all sorts of wrong reasons, that’s not the case today,” Bovaird said. “We’re going to remember this season for all sorts of great things. Most importantly, with all of the distractions, the new protocols, and everything else, these young men were able to remain focused and power their way toward their goals, giving it everything they had.”

“Our boys’ year was a good year to when you look back at it,” Paola coach Darvin Willard said. “I’m sure they would tell you it isn’t as good as they wanted. Our team was young, but they had two senior leaders in Ben Timpe and Carson Gleghorn.

“We didn’t have a medalist this year, but I think the next couple of years could be very special,” he said. “Our boys will train harder in the off-season, so the same results don’t happen again. To wrestle at the state tournament this year was an accomplishment itself. To go through three qualifying tournaments to get to state is very hard and we got four to the state tournament.”