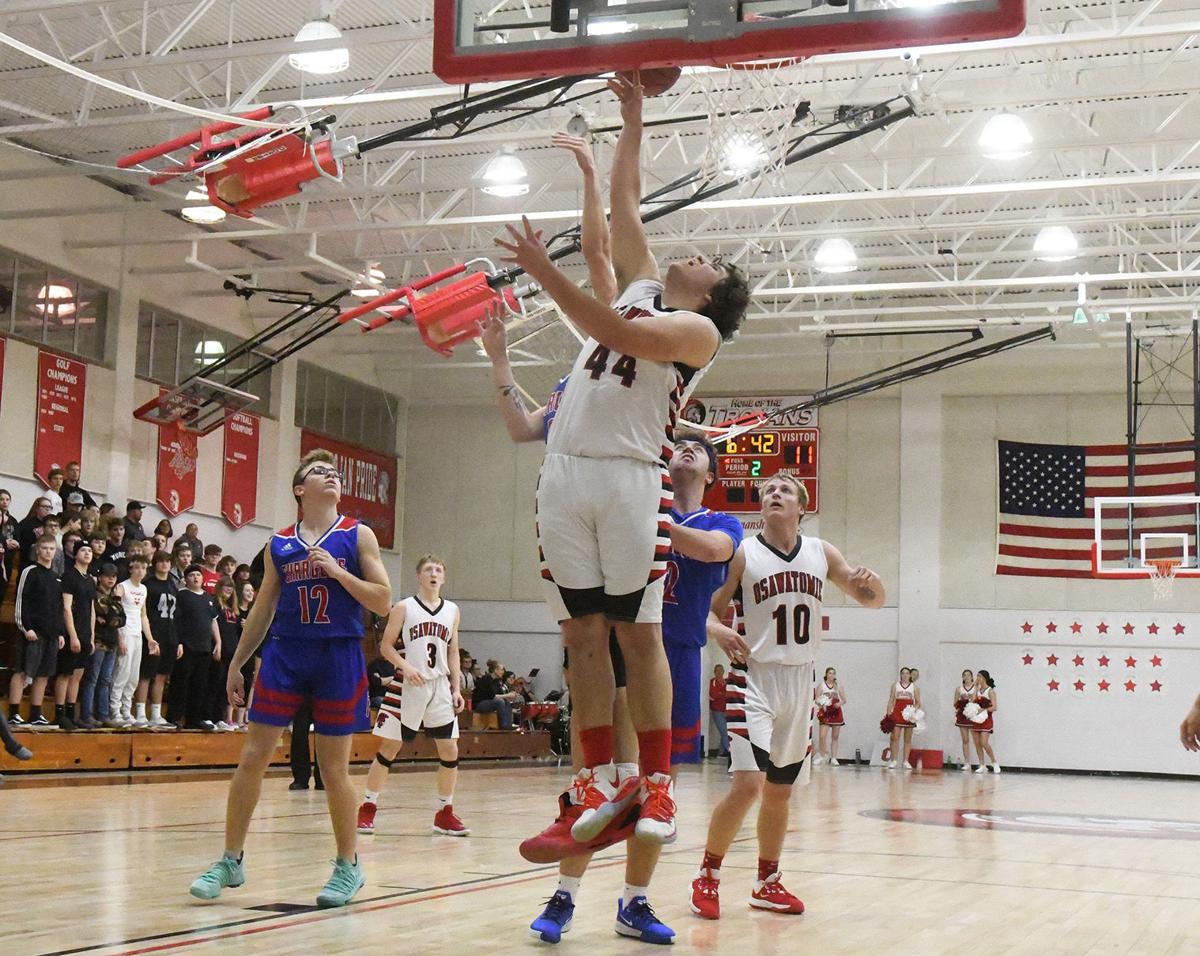 Osawatomie center Colby Jones goes up for an inside basket in the Trojans’ home opener against Santa Fe Trail on Tuesday, Jan. 7. Jones scored a game-high 32 points and grabbed 17 rebounds. 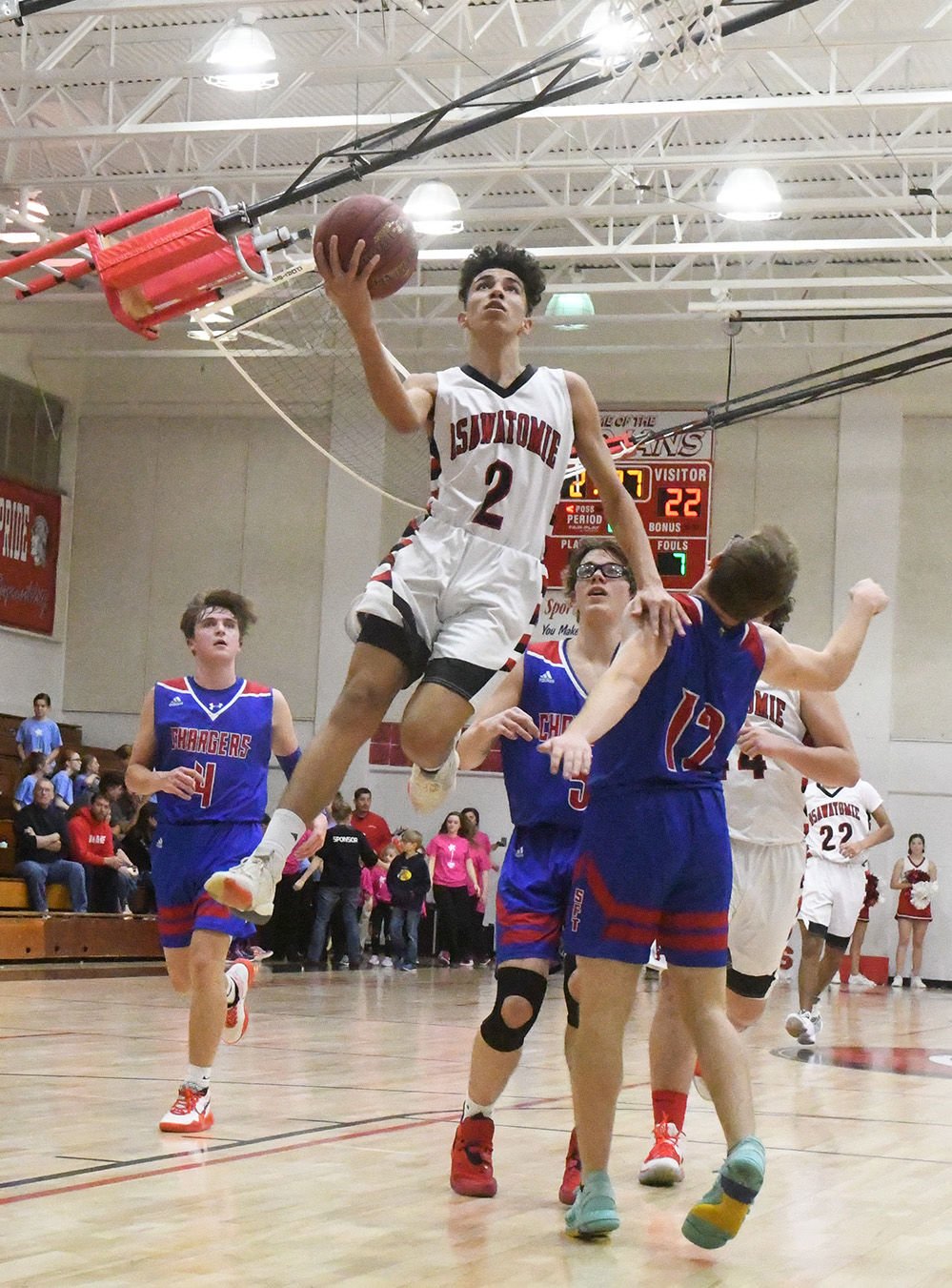 Osawatomie guard Romeo Smith drives to the basket for a layup against Santa Fe Trail at Mac Steel Gymnasium on Tuesday, Jan. 7.

Osawatomie center Colby Jones goes up for an inside basket in the Trojans’ home opener against Santa Fe Trail on Tuesday, Jan. 7. Jones scored a game-high 32 points and grabbed 17 rebounds.

Osawatomie guard Romeo Smith drives to the basket for a layup against Santa Fe Trail at Mac Steel Gymnasium on Tuesday, Jan. 7.

OSAWATOMIE — Colby Jones made the final home opener of his high school career a memorable one for the Osawatomie Trojans.

Jones scored a career-high 32 points as the Osawatomie Trojans defeated the Santa Fe Trail Chargers by a score of 73-49 at Mac Steel Gymnasium on Tuesday, Jan. 7.

Jones made 14 field goals. He made four free throws. Jones also grabbed a team-high 17 rebounds. He scored 22 of his 32 points in the second half, including 12 points on five field goals and a pair of free throws in the third quarter.

His brother Chad was on hand, as well as his mom and dad and grandmother, to see him become the top single-game scorer in the family. Chad had held the family record with 29 points.

Coming off the court, Colby was as shocked as anyone. Jones had no idea how many points he had. He just knew the Trojans won, and won big.

The Osawatomie Trojans took charge of the game from the opening tip-off, jumping out to a 9-1 lead in the first five minutes.

Jones made three inside baskets for six of the nine points to get the Osawatomie offense rolling. Boyd Cole hit a 3-pointer during the run.

Kaeden Carver made a layup for an 11-5 lead with 3:58 left in the first quarter. Romeo Smith had a steal and passed the ball ahead to Carver, who drove for the layup to make it 13-5.

Osawatomie was tenacious on defense and pushed the ball in transition, taking advantage of its quickness.

Six different players scored in the victory for the Trojans.

Chris Pursley opened the second quarter with a baseline 3-pointer, making it 21-11.

Jones grabbed an offensive rebound and got the bucket for a score of 23-13.

Cole hit a pair of 3-pointers during a second-quarter run. He had an incredible step-back jump shot to make it a 16-point game in the second quarter.

Osawatomie sank 31 field goals, including six 3-pointers. The Trojans made five of 11 from the free-throw line.

The Osawatomie student section went crazy in the final seconds, chanting “Cody Sloan.” When coach Chris Pitts sent him onto the floor, the cheers were even louder.

Santa Fe Trail made 21 field goals with five 3-pointers. The Chargers sank two of five from the free-throw line.