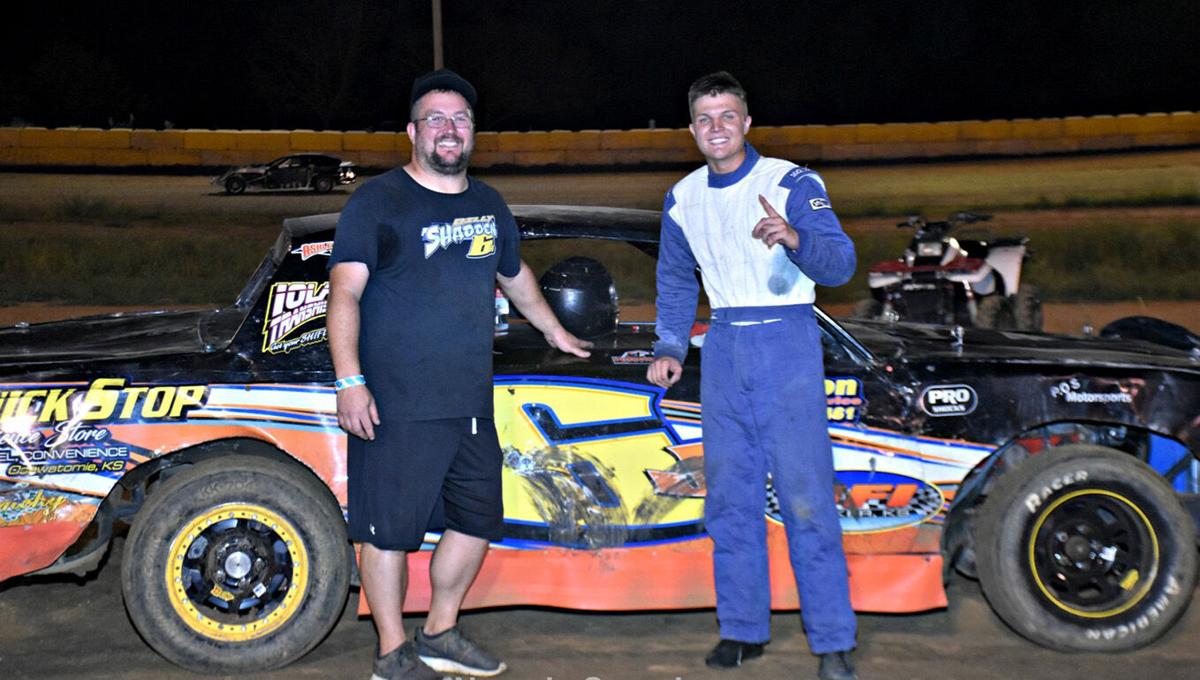 Billy Shadden Jr., crew chief, and his brother Justin, celebrate one of Justin’s four feature victories on his way to the points championship at the Nevada Speedway in Missouri. 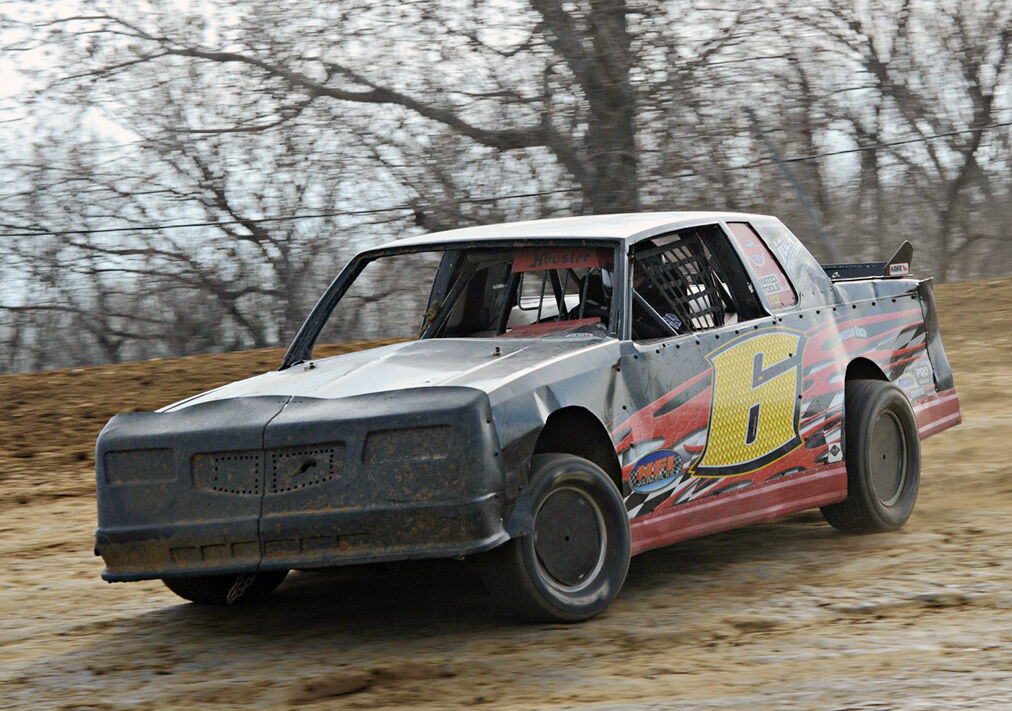 Justin Shadden takes a spin in the No. 6 race car. Shadden won his first ever feature race this year and then went on to capture the points championship. 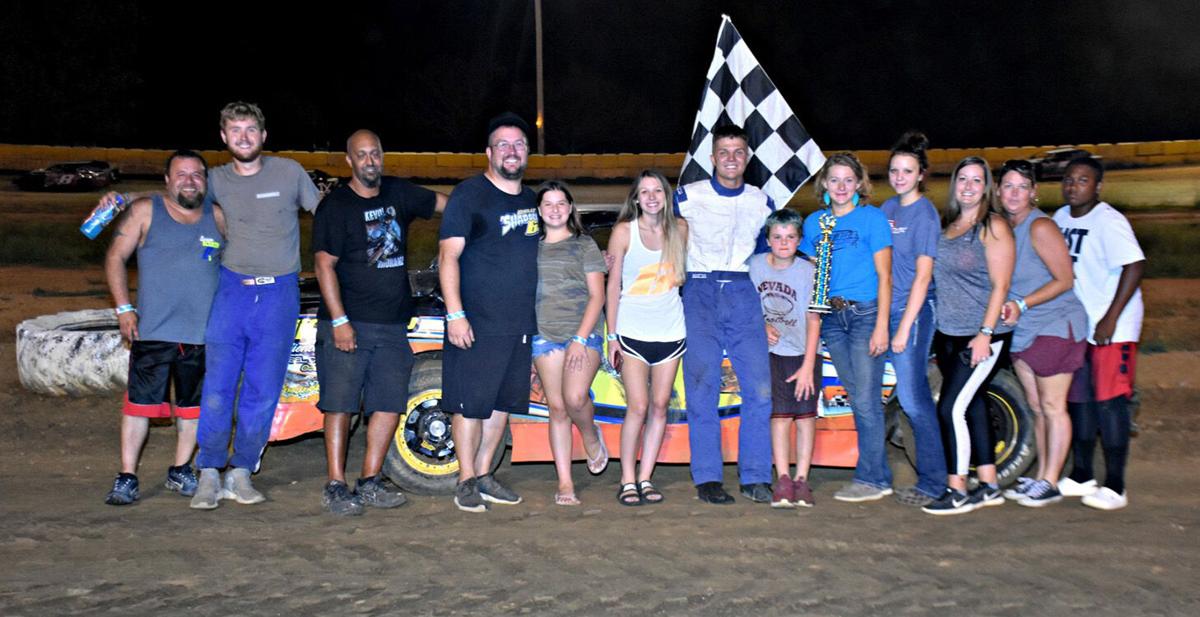 Justin Shadden celebrates in the winner’s circle at the Nevada Speedway in Missouri with family and friends after winning a feature race on his way to the points championship,

Billy Shadden Jr., crew chief, and his brother Justin, celebrate one of Justin’s four feature victories on his way to the points championship at the Nevada Speedway in Missouri.

Justin Shadden takes a spin in the No. 6 race car. Shadden won his first ever feature race this year and then went on to capture the points championship.

Justin Shadden celebrates in the winner’s circle at the Nevada Speedway in Missouri with family and friends after winning a feature race on his way to the points championship,

OSAWATOMIE — The Shadden family has been racing for decades.

Billy Shadden Jr. has chased after a championship for years, coming very close several times. He has been pulling double and triple duty this year, not only racing, but working on race cars for his brother, Justin, and daughter, Raegan.

Billy has raced in the dirt tracks since 1998. Uncle Bill started racing in the 1960s and raced into his 90s.

Great-grandparents Roland and Wanda have encouraged and supported the Shadden family’s racing dreams.

This season, the Shadden family racing team brought home something special, the 2020 pure stock championship at Nevada Speedway in Missouri.

Justin Shadden was at the top nearly every week, challenging for the checkered. Headed into the final weeks of the season the difference between taking the championship and second place, coming close again, was only 87 points.

Billy Jr. and Justin worked in the shop, put in the time and made sure one bad night would not end the dream.

Justin raced after it and celebrated his points championship in the winner’s circle with family and friends.

“Coming from a family with a rich history in racing, and to be able to put up the stat line I did throughout the season, I’d have to say it’s a damn good feeling,” Shadden said.

“None of it would be possible without the support of my parents, the hard work and mentoring from my big brother, and my fiancé being beside me the whole way,” he said. “Man it was an amazing feeling accomplishing that. It took a lot of dedication, hard work and time away from family. All of that made for a long season, but we got it done.”

Billy Shadden Jr. and Justin Shadden are sons of Billy Sr. and Debbie Shadden of Osawatomie.

Raegan Shadden, the daughter of Billy and Alexis, started racing for the first time this season. Raegan, a sixth-grader, placed sixth in points in her division with a very solid rookie campaign.

“Every race she ran, she finished,” Billy said. “She learned a lot about racing from it while having some fun. We owe a debt of gratitude to all of our sponsors who helped make it possible.”

Billy Shadden was so close to a points championship behind the wheel, he could taste it. He was runner-up several times and within the top three to five spots numerous times.

This time, Billy was the crew chief for his brother, Justin, and the family won it not only working together, but teaming up with some great sponsors and mechanics in the area.

“The feeling of winning a championship is amazing,” Billy said. “During my time of racing through the years, I have personally come up within a few of the top two to top five in overall points standings, but to be a part of helping my brother achieve the ultimate goal of winning his first championship is a great feeling.”

It was no easy road, Billy said. They never are.

Justin Shadden had a great start to the season with some top four finishes. Then he brought home the first feature win of his career.

That would be just the beginning, Billy said.

“Starting out the season for him we just had hopes of having a good fun season,” Billy said. “He started doing pretty good. I was standing up at the outer edge of turn one and I was able to look straight down the front stretch wall toward the flag man. I saw my brother take over the lead. I remember seeing the white flag for one lap to go and recall it being a very long one lap.

“Watching him run down the back stretch and enter turn three and come off turn four with the checkers flying, I knew at that time, his season was going to be even bigger,” he said. “I ran out on the front stretch and it was pure joy seeing that young man grab his first win.”

Justin had a few tough weeks where the racing was up and down. He stayed the course. Justin then reeled off three consecutive victories, and the race for the Shadden family’s first points championship was on.

The keys to the points championship was one great racing family, Billy said.

“It all started at home with help from our parents, Billy Sr. and Debbie Shadden, and some great guys like Devin Powell, John Goodwin, Travis Brewer, Don Sears and Toby Eble. We were able to put together solid finishes week in and week out.”

The Shadden racing team worked at least 20 hours a week in the garage, keeping the car in high performance.

“There were a few nights we were out there until 1 to 3 a.m., trying to make sure we had a car that was ready to go,” Billy said. “I think some of the biggest challenges we faced was trying to keep up on repairs.”

The Shaddens had to run to BBC Chassis in Chanute, Allen’s Automotive in Chanute and Motorsports of Kansas City to get parts or crucial repairs would not have happened, Billy said.

There was a lot to balance with life at home and the racing team, he said. That is the life of a race car family.

“There was repair work we were not able to do in our shop,” Billy. said. “It is more of a challenge than some may think, trying to take care of personal lives, business lives and stay on top of everything race wise. We had a few weeks when it was down to the wire. That is when the team pulled together and it done.

“As season went on it came down to 87 points between first and second in points, which meant one bad night and it was over,” he said.

The crew spent extra time to make sure everything was ready to go.

“Then it just came down to driver doing his part,” Billy said. “It was a great season for sure having my brother finally pull off not only his first ever feature win, but also bringing home the checkers four times and getting the ultimate goal of first in the championship.”

Justin Shadden was consistent, not missing a single night of racing.

Tom and Travis Brewer of Brewer’s Automotive have been a great help to the Shadden Racing Team, Billy and Justin said.