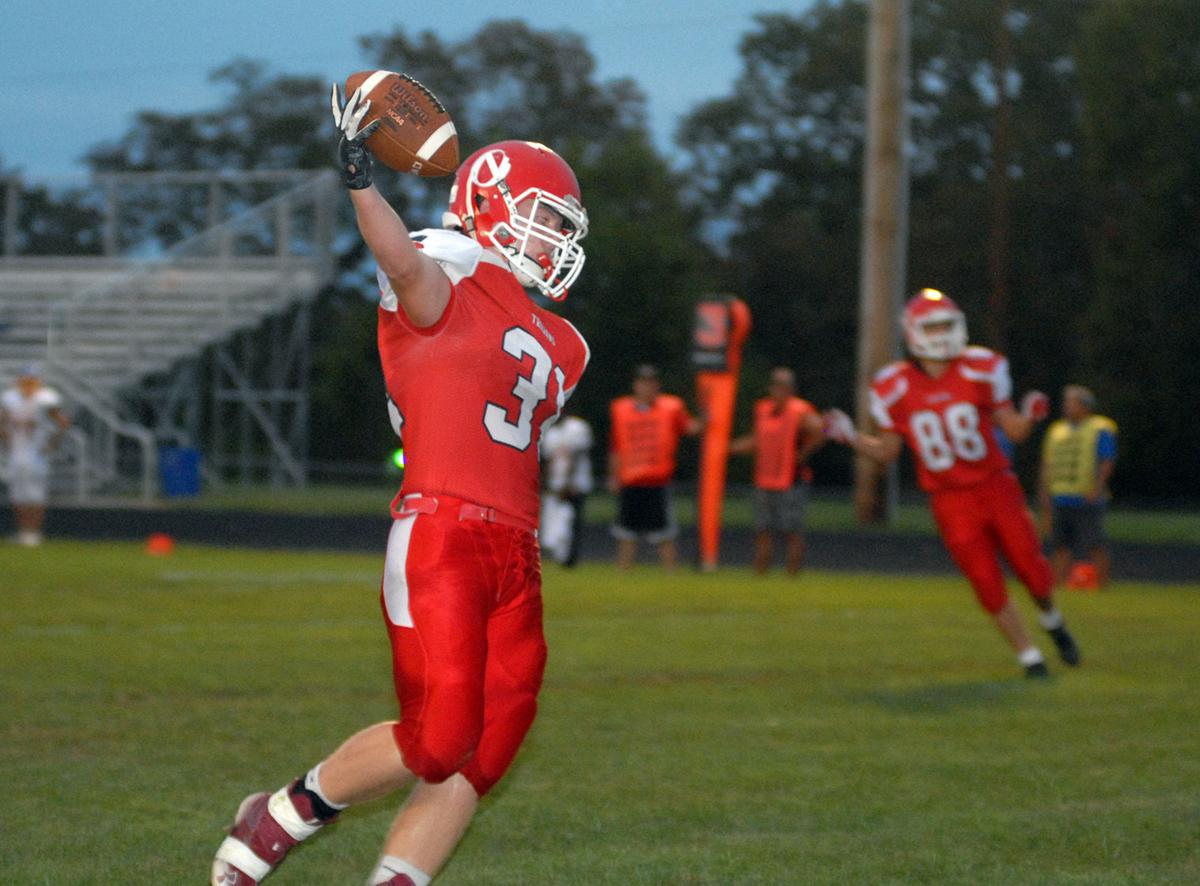 Running back Ethan Wallace raises the football over the goal line after scoring on a 13-yard touchdown pass from quarterback Boyd Cole as Osawatomie defeated Parsons 42-20 on Friday, Sept. 20, for the team’s first victory since 2017. 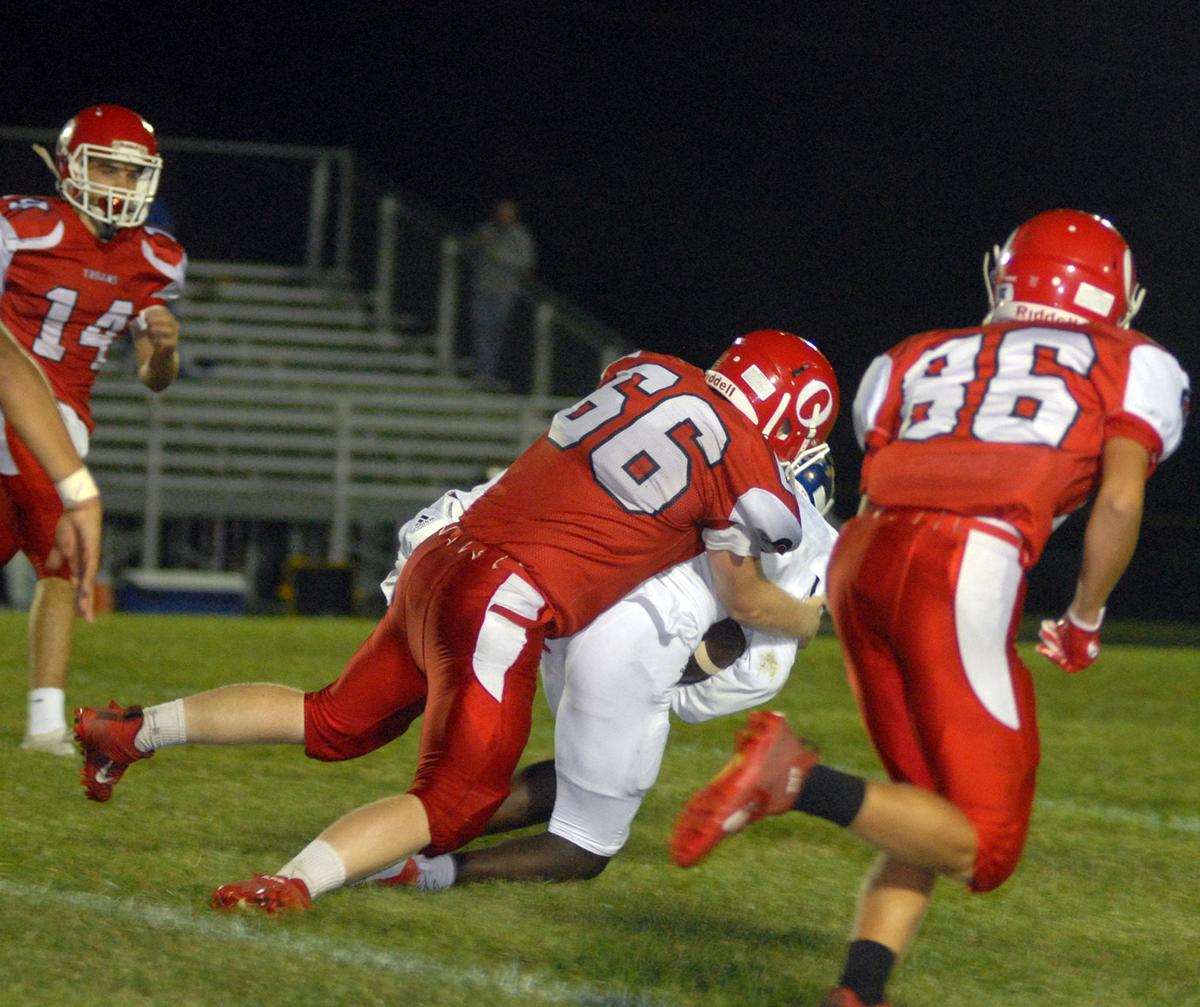 Osawatomie defensive end Brandon Armstrong chases down a Parsons running back for a tackle in the Trojans’ home opener. 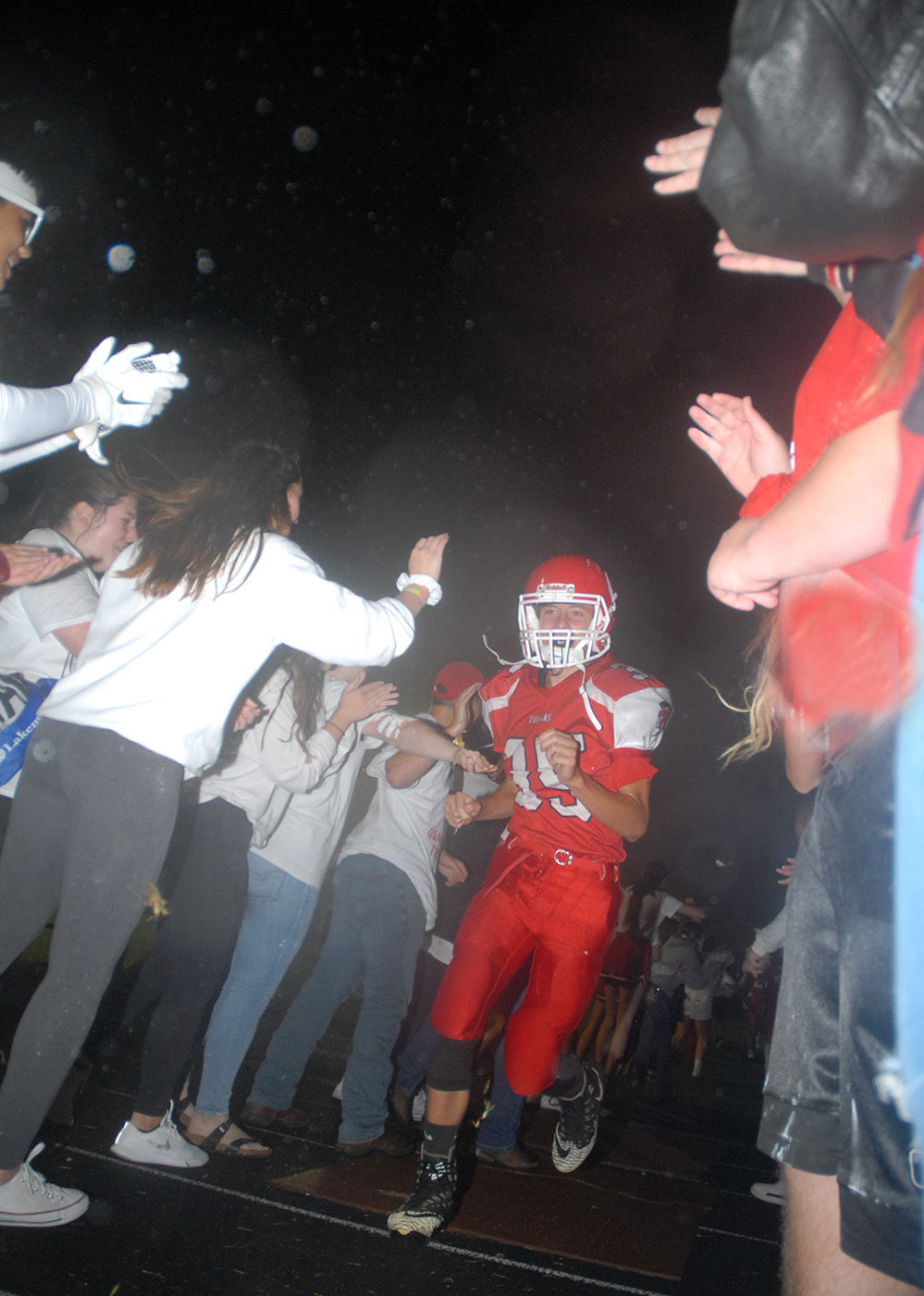 Running back Ethan Wallace raises the football over the goal line after scoring on a 13-yard touchdown pass from quarterback Boyd Cole as Osawatomie defeated Parsons 42-20 on Friday, Sept. 20, for the team’s first victory since 2017.

Osawatomie defensive end Brandon Armstrong chases down a Parsons running back for a tackle in the Trojans’ home opener.

OSAWATOMIE — There was a lot to take in at Lynn Dickey Stadium.

First and foremost was the Osawatomie Trojans’ thrilling 42-20 victory against the Parsons Vikings on Friday, Sept. 20, for the team’s first win since 2017.

It is always easy to look at the offense. Quarterbacks and running backs always get the spotlight.

Running back Braden Bradshaw had another big night, scoring on touchdown runs of 38, 19, 20 and 5 yards. Bradshaw ran the ball 45 times for334 yards. He averaged 7.4 yards per carry.

Another player who had a huge night, thwarting two possible touchdowns, was defensive back Bailey Cornelison. He broke up two long Parsons pass plays and ended another drive in the third quarter with an interception.

Opening holes for Bradshaw and protecting the pocket for Cole were linemen Colby Jones, Toby Wilson, Brandon Armstrong, Reed Madden and Kaden Fields. Wilson made a great block to seal a lane for Bradshaw on a touchdown run in the first quarter.

Jones, Wilson, Armstrong, Madden and Fields also stuffed Parsons’ rushing attack much of the evening, forcing the Vikings to put the ball in the air.

Lineman Malik Schultz, lineman Cody Sloan, defensive back Vincent Fox, back Beau Beers, defensive back Jay Fillipin, back Chance Mitzner and linebackers Cole and Bradshaw also made some big plays against the run as the Osawatomie defense swarmed to the ball.

Josh McBride came in and contributed in the rushing game, picking up some tough yards. He also recovered a fumble.

Defensive back Thaid Timblin had a solid night in coverage and came up to help against the run. Timblin is a dual sport athlete for the Trojans, also running cross country.

“That was an awesome win,” Osawatomie coach Ron Madden told the team in the locker room. “I liked what I saw tonight. I am really proud of you guys.

“You have worked hard, I have pushed you hard,” he said. “Congratulations. We got that monkey off our backs.”

The win came from a team that bought in and made a commitment, Madden said. The team never quit last season, and that work ethic is a fabric of the program.

“These guys worked so hard,” Madden said. “I am happy for them. This was a huge win for us.”

Bradshaw moved the chains twice on big conversion runs during the Trojans’ opening drive. Fox had a run up the middle for another first down.

Bradshaw had a 13-yard run to put Osawatomie inside the 20-yard line. The Trojans put the ball in the end zone on a 13-yard pass from Cole to Wallace with 7:24 left in the first quarter.

Osawatomie came right back with a 38-yard touchdown run by Bradshaw. The conversion pass attempt failed for a score of 14-6 with 4:22 left in the first quarter.

Schultz had a big hit to stop Parsons on the kickoff return. Parsons ran three plays and was forced to punt.

Osawatomie marched the ball inside Parsons’ 20-yard line again, but turned the ball over with a fumble.

The Trojan defense stopped the Vikings again, forcing another punt. A short punt gave Osawatomie the ball at the Parsons 33-yard line.

Osawatomie capitalized on the field position with a 19-yard touchdown run by Bradshaw, making it 20-6 with 8:29 left in the second quarter.

Parsons made it a one-possession game with a 32-yard touchdown pass, narrowing the margin to 20-12.

Facing third down and long on another drive, Parsons went to the air and had the pass broken up by Cornelison.

Parsons was forced to punt and Osawatomie put one more touchdown drive together before the half.

Bradshaw lowered his shoulder to bounce off a tackler and made a spin move on a 12-yard gain. Cole had a 20-yard pass play to Wallace for a first down and 10 at the Parsons 20-yard line.

Bradshaw scored on a 20-yard touchdown run in the final 35 seconds of the quarter. Osawatomie led 28-12 at the intermission.

Parsons threw the ball all over the field in warm-ups, but the Vikings did not have to deal with Cornelison yet. Parsons went back to its strength in the third quarter on a long pass play only to be denied by Cornelison with another well-timed deflection.

The Trojans made a defensive stop, got the ball back on downs and capped a touchdown drive with a 1-yard run by Cole. McBride ran for the two-point conversion, making it 36-12 with 5:56 left in the third quarter.

Parsons scored on a 35-yard touchdown pass less than one minute later, making it 36-20.

Cornelison did one better than breaking up a pass on Parsons’ ensuing possession, he picked off the pass for Osawatomie.

Parsons had a fumble and McBride recovered the football for the Trojans.

Cole completed four of nine passes for 53 yards and one touchdown. He had seven carries for 19 yards and a touchdown.

Wallace had three receptions for 41 yards and a touchdown. Fox had one catch.

Cole led the defense with 11 tackles, including five solo tackles. Davis and Wallace each had six tackles. Fields made four tackles. Armstrong and Cornelison each had three tackles.