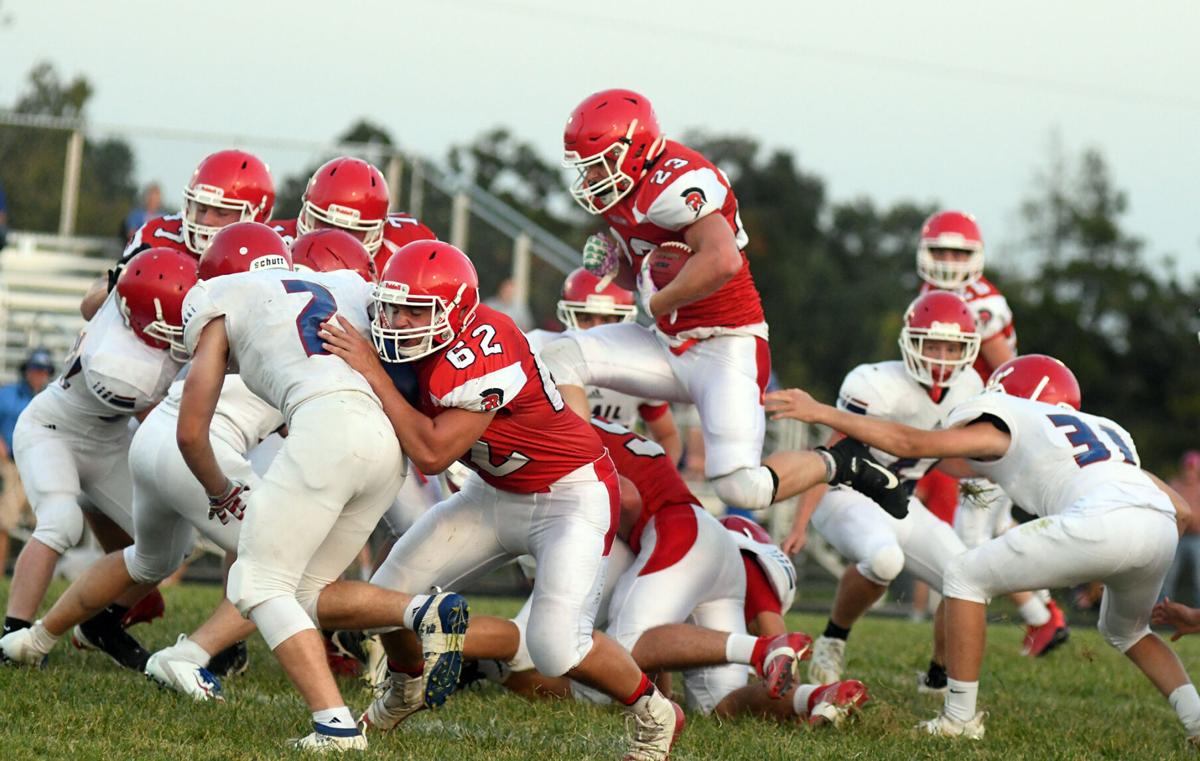 Osawatomie running back Sutter Conrad leaps over a defender on a rushing attempt against Santa Fe Trail at Lynn Dickey Field on Friday, Sept. 25. 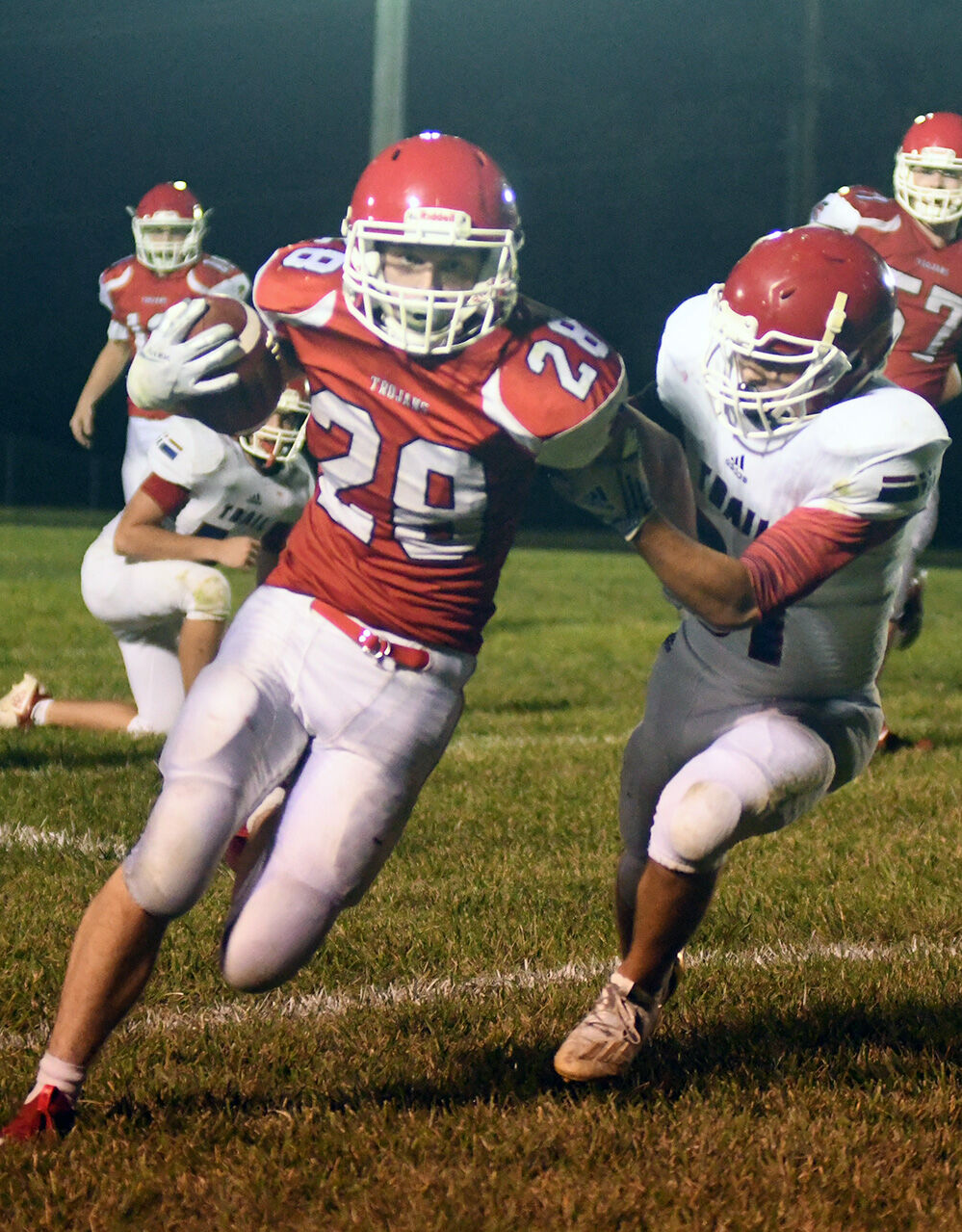 Jay Filipin turns the corner on a first down run for the Trojans, He had three touchdown runs for Osawatomie on Friday, Sept. 25. 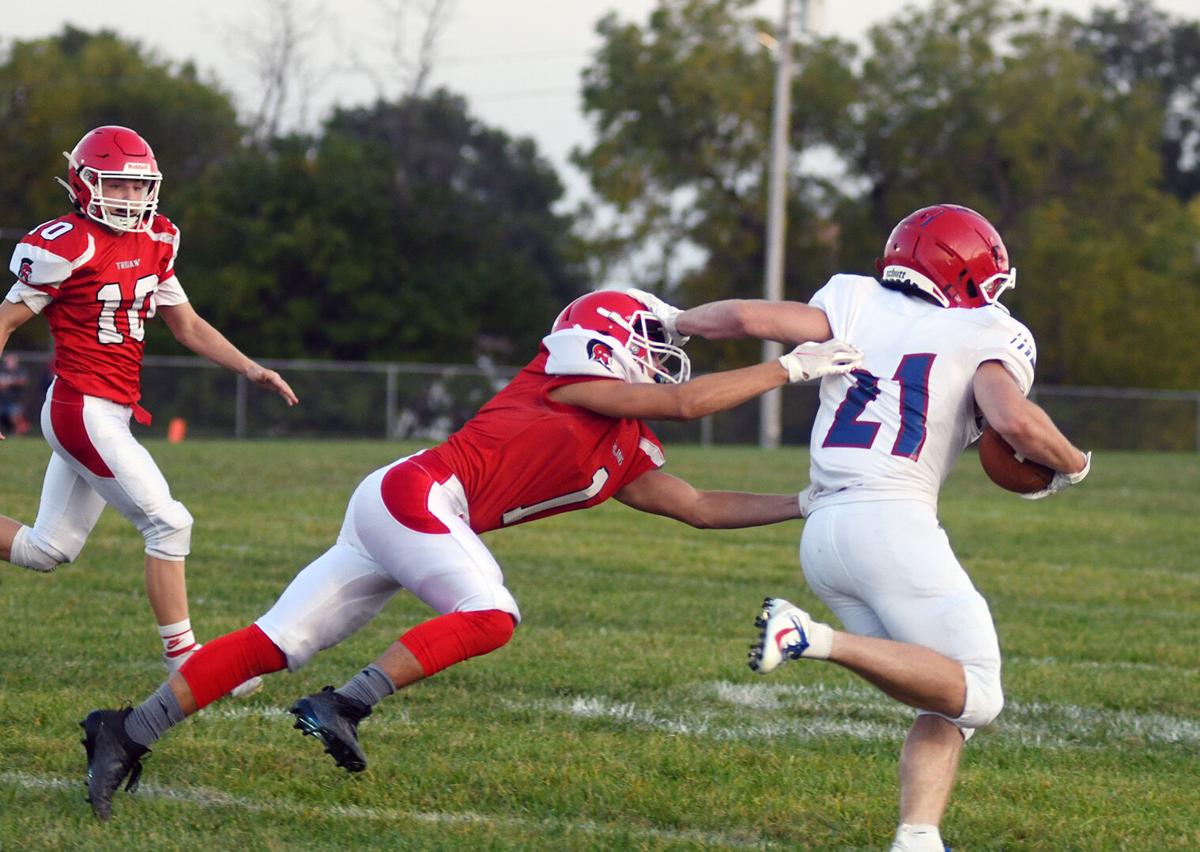 Osawatomie defensive back Chance Mitzner wraps up a Santa Fe Trail wide receiver to make a tackle for the Trojans.

Osawatomie running back Sutter Conrad leaps over a defender on a rushing attempt against Santa Fe Trail at Lynn Dickey Field on Friday, Sept. 25.

Jay Filipin turns the corner on a first down run for the Trojans, He had three touchdown runs for Osawatomie on Friday, Sept. 25.

Osawatomie defensive back Chance Mitzner wraps up a Santa Fe Trail wide receiver to make a tackle for the Trojans.

OSAWATOMIE — For the first time this season, the Osawatomie Trojan football team rang the bell.

The bell rings for every point scored. Osawatomie put its first touchdown on the scoreboard at Lynn Dickey Field against Santa Fe Trail on Friday night, Sept. 25, scoring on its first possession of the game.

Osawatomie didn’t ring the bell once or twice, but three times in a 48-22 loss to Santa Fe Trail.

Running back Jay Filipin had three touchdowns for the Osawatomie Trojans. He ran the ball 29 times for 182 yards.

Sutter Conrad, who was injured in the game, had six carries for 72 yards.

The Osawatomie Trojans led 6-0 in the first quarter. The Santa Fe Trail Chargers scored 27 unanswered points, increasing their lead to 27-6 in the third quarter.

Defensive back Chance Mitzner intercepted a Santa Fe Trail pass to set the stage for the first Osawatomie touchdown of the season. Mitzner picked off the pass with 10:12 left in the first quarter and returned it 17 yards for a first down and 10 at the Trojans own 33-yard line.

Conrad took over on the drive. He opened the possession with a 23-yard run. He added a 6-yard run, 9-yard run and 25-yard run to set up a first down and goal to go.

Filipin carried the ball in from the 2-yard line, giving the Trojans their first score of the season. Osawatomie led 6-0 with 7:55 left in the first quarter.

Back Seth Carrow had a 6-yard run. He moved the chains on a 5-yard run, jumping over the defense for extra yardage. The drive stalled at the Santa Fe Trail 16-yard line.

Osawatomie lineman Toby Wilson made a big tackle on first down. Mitzner broke up a Chargers pass play.

Kaden Fields and Carrow teamed up for a tackle, making the stop for a loss of 4 yards.

Santa Fe Trail turned the field on Osawatomie with a 70-yard punt. The Trojans started on their own 5-yard line.

Osawatomie was forced to punt. Mitzner made a great tackle on the punt coverage team. Nolen Noel made a touchdown-saving tackle against the Chargers. Santa Fe Trail ended up scoring on a 15-yard touchdown run. The extra-point kick was good, giving Santa Fe Trail a 7-6 lead.

Santa Fe Trail struck again with 4:27 left in the half, putting the ball in the air on a 60-yard touchdown pass.

Osawatomie quarterback Jake Whitaker was looking for Filipin on a pass play, and Santa Fe Trail broke it up, but the Chargers were called for pass interference. Filipin moved the chains on a third-down-and-one conversion. Osawatomie had two incomplete passes and turned the ball over on downs at the Santa Fe Trail 4-yard line with 10.2 seconds left in the half.

Santa Fe Trail opened the second half with a 10-yard touchdown pass, making it 20-6.

Osawatomie recovered its own fumble and had an incomplete pass, forcing a punt.

Filipin had a big run on the kickoff return. Whitaker got out of the pocket and ran 28 yards to give the Trojans a first down at their own 45-yard line. Filipin had a great run with a stiff-arm, and Santa Fe Trail was flagged for a horse-collar tackle, giving Osawatomie a new set of downs at the Chargers’ 35-yard line.

Filipin capped the drive with a 9-yard touchdown run for a score of 27-14 with 1:04 left in the third quarter.

Santa Fe Trail answered with a 43-yard touchdown pass, increasing the lead to 34-14.

Fields had a huge block, opening a hole for Filipin on a 6-yard run. Carrow had a 9-yard run. Filipin scored on a touchdown run.

Whitaker completed two passes. Filipin and Carrow each had one reception.

Matthew Fanning, Kaiden Gravatt and Whitaker had three tackles each.