You are the owner of this article.
Edit Article Add New Article
You have permission to edit this article.
Edit
News
Announcements
Voices
Sports
Obituaries
Special Sections
Multimedia
Marketplace
Contests
Info
1 of 5 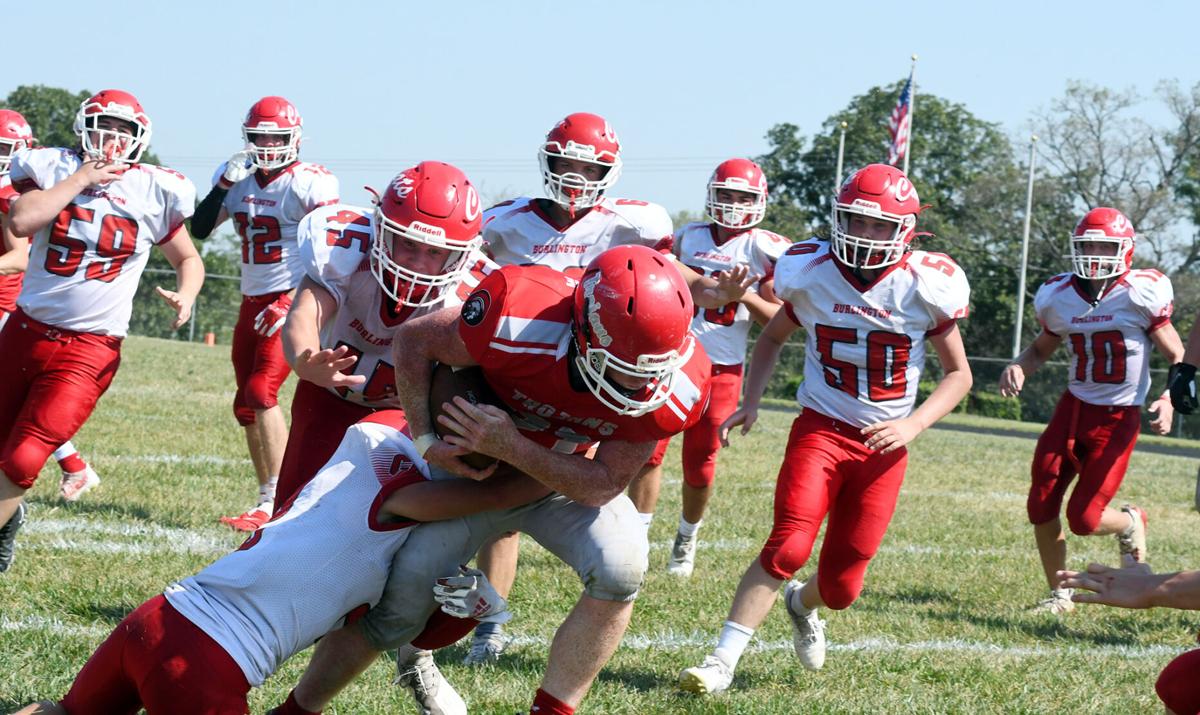 Osawatomie running back Seth Carrow plows his way into the end zone against Burlington on a 4-yard touchdown run Saturday, Sept. 18. 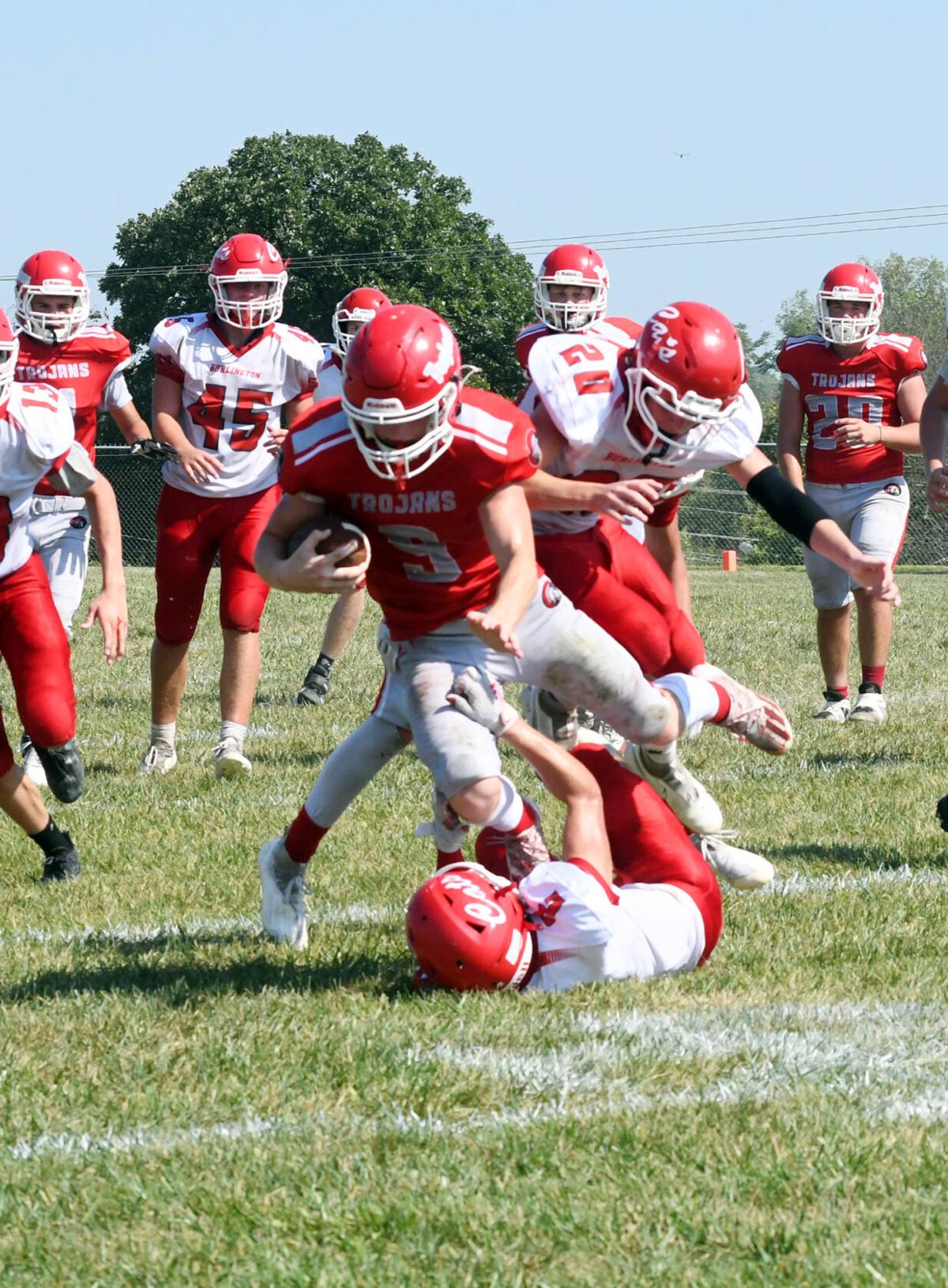 Osawatomie quarterback Jake Whitaker runs over a Burlington defender on his way to a first down for the Trojans on Saturday, Sept. 18. 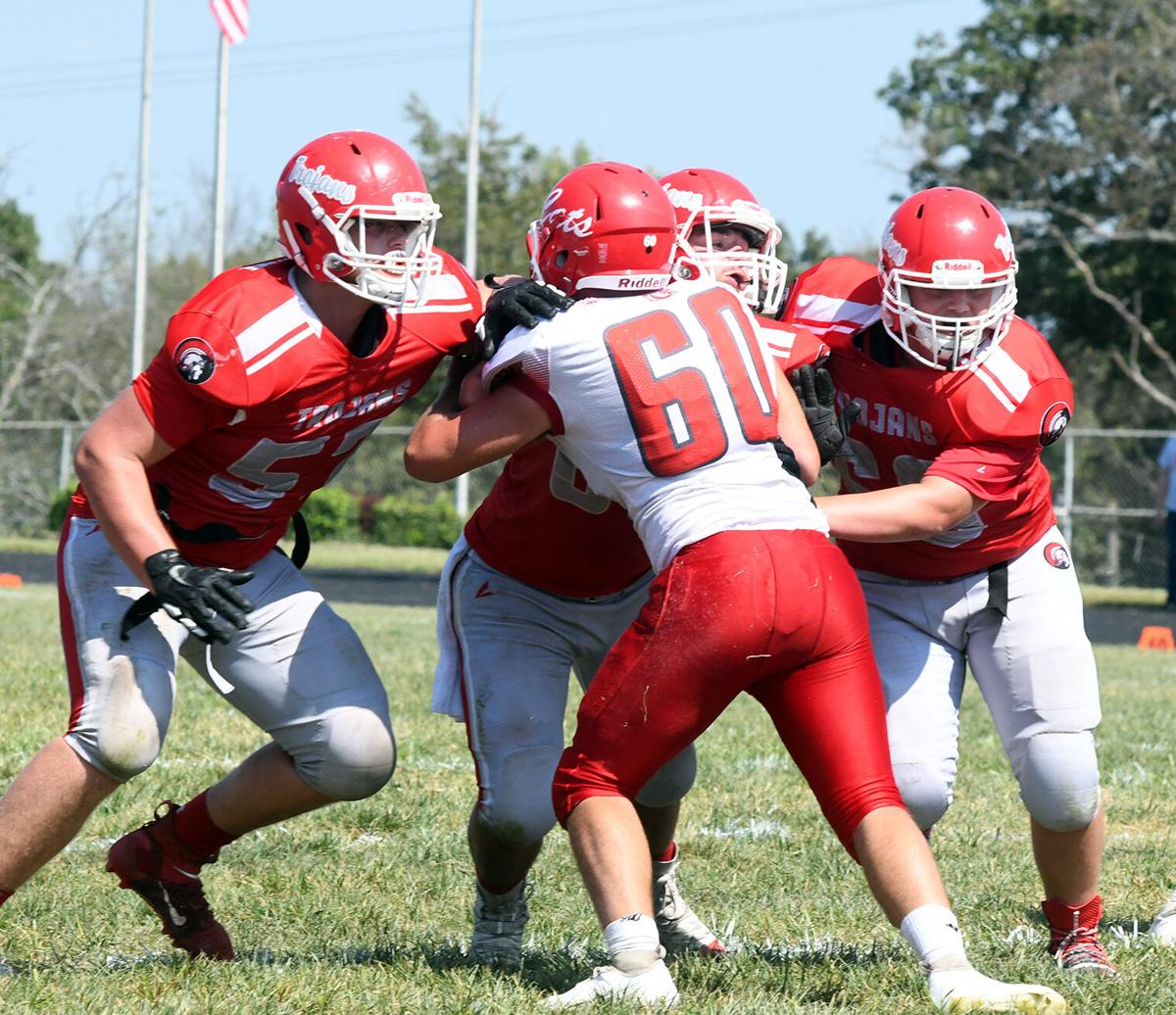 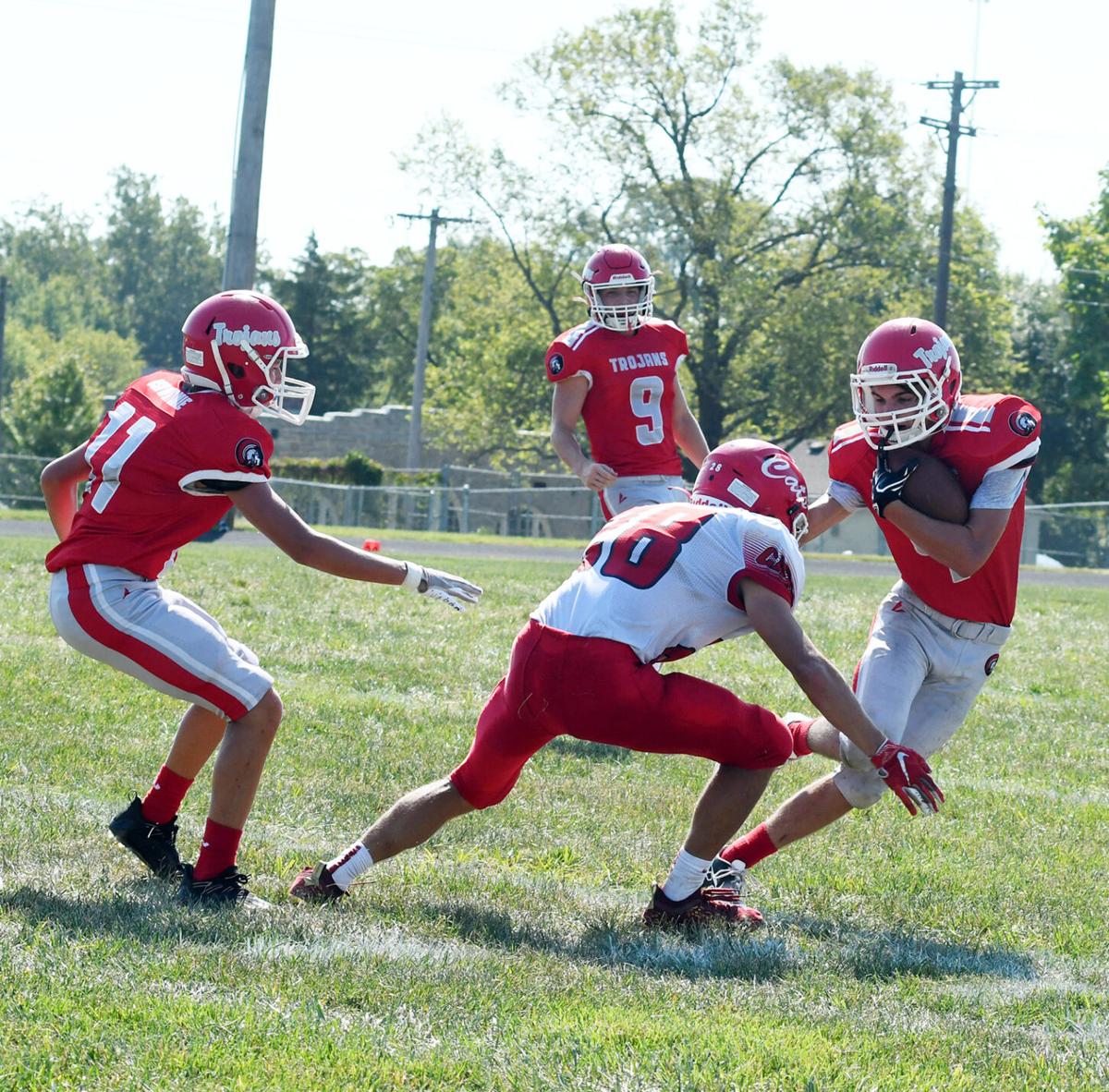 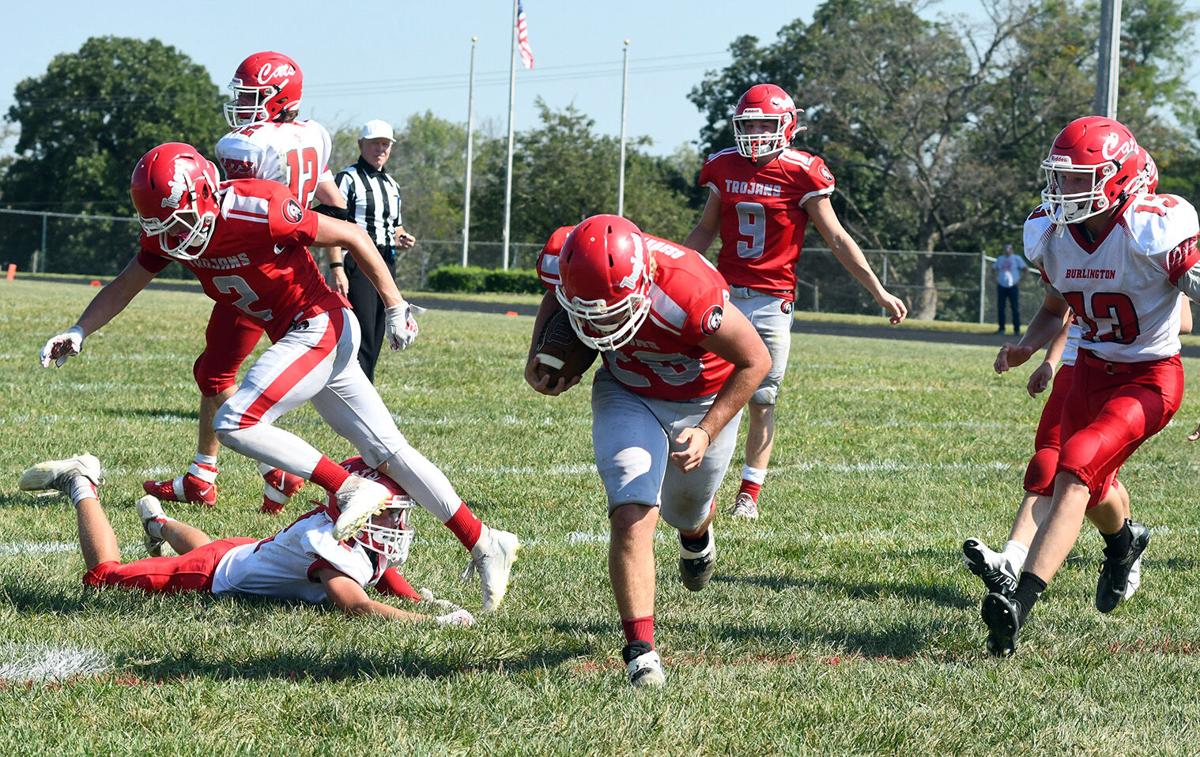 Osawatomie running back Seth Carrow plows his way into the end zone against Burlington on a 4-yard touchdown run Saturday, Sept. 18.

Osawatomie quarterback Jake Whitaker runs over a Burlington defender on his way to a first down for the Trojans on Saturday, Sept. 18.

OSAWATOMIE — The Trojan football team did everything but post a win in a heartbreaking loss at Lynn Dickey Field.

Osawatomie led until 6:36 to go in regulation against Burlington on Saturday, Sept. 18. The Wildcats capped off a drive with a 2-yard touchdown run and added the conversion to tie the game at 22-22.

There were still hopes of a game-winning touchdown drive for the Osawatomie Trojans, or overtime. The Burlington Wildcats erased both of those on a reverse that went 11-yards for a touchdown, sealing Osawatomie’s fate in a 28-22 loss with 7.7 seconds left on the clock.

The Osawatomie Trojans were also thwarted by an inadvertent whistle on a Burlington fumble in the second half. Due to the whistle, despite Osawatomie recovering the football in Burlington territory, the ball was dead.

Quarterback Jake Whitaker put Osawatomie on top with a 13-yard touchdown run in the first quarter.

Running back Seth Carrow had a 20-yard gain on a pitch from Whitaker, taking the ball to the 40-yard line.

Nolan Noel caught a 40-yard pass from Whitaker to make it first down at the Burlington 17-yard line.

Whitaker had a 5-yard run for a first down and goal to go in the second quarter. Carrow capped the drive with a 4-yard touchdown run with 11:15 on the clock. Whitaker pitched the ball to Kaiden Gravatt for the two-point conversion, increasing the lead to 14-0.

Senior linebacker Gavin Brewer stuffed the run to stop Burlington as the Osawatomie defense held and took the ball over on downs.

Burlington cut into the deficit with a 17-yard touchdown run, making it 14-6.

Carrow ran for a first down. Whitaker moved the chains with a 12-yard run. The Trojans fumbled the football on first down and 10 from the 40-yard line, but Carrow was there to recover the ball. Carrow had another big run, taking the ball to the 37-yard line.

With the clock winding down in the first half, Whitaker threw for the end zone and had the ball picked off.

Osawatomie started driving in the third quarter. Whitaker completed a pass to Ryan Spencer for fourth down and inches. Whitaker ran for the first down. He had another big run, fighting for extra yardage and dragging a group of Wildcats with him for a 17-yard gain and new set of downs at the 30-yard line.

Whitaker ran over two Burlington defenders for a 10-yard gain, giving Osawatomie another first down at the 20.

Carrow had a 12-yard run. Whitaker ended the drive with a 4-yard touchdown run. Whitaker threw a conversion pass to Gravatt for the two-point conversion, making it 22-6.

Burlington had a big kickoff return with a touchdown-saving tackle by Noel.

Burlington would capitalize on the short field, scoring on a touchdown run. The Wildcats added the two-point conversion.

Osawatomie was held on fourth down. Burlington took over on downs and put a drive together.

After having a touchdown called back on an illegal block, Burlington moved the chains on a reverse play that went for a 27-yard gain. Burlington ended the march with a 2-yard touchdown run. The conversion tied the game at 22-22 with 6:36 on the clock.

The Burlington defense held again. And the Wildcats put one more drive together, scoring on another reverse. This one went for 11 yards and the game-winning touchdown.