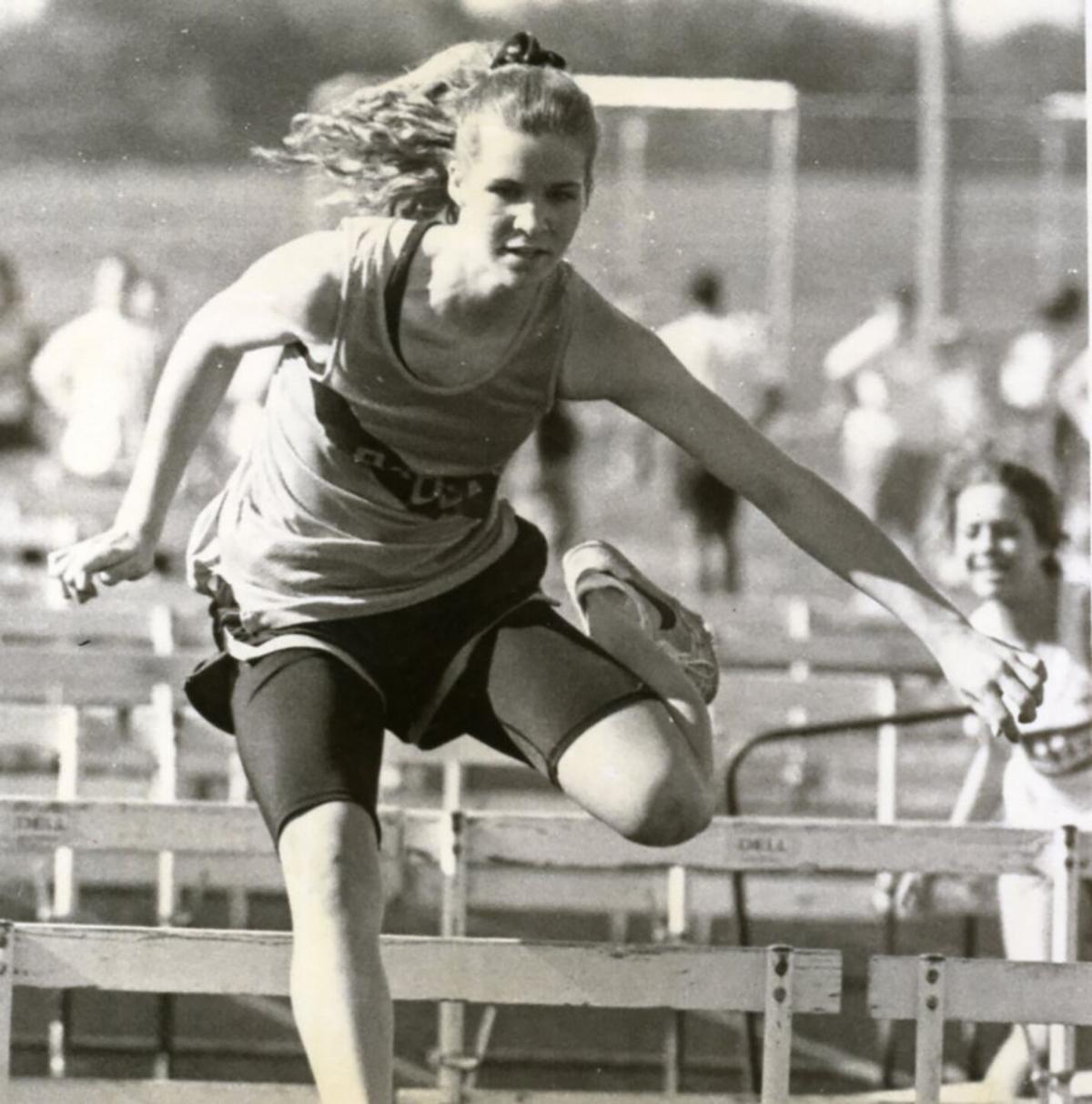 Robin Gostautas Branine soars over the hurdle for the Lady Panthers in 1993. As a sophomore she was sidelined for three weeks with a back injury, but made a triumphant return on her 16th birthday, going from the chiropractor’s office to regionals where she qualified for state in three events. 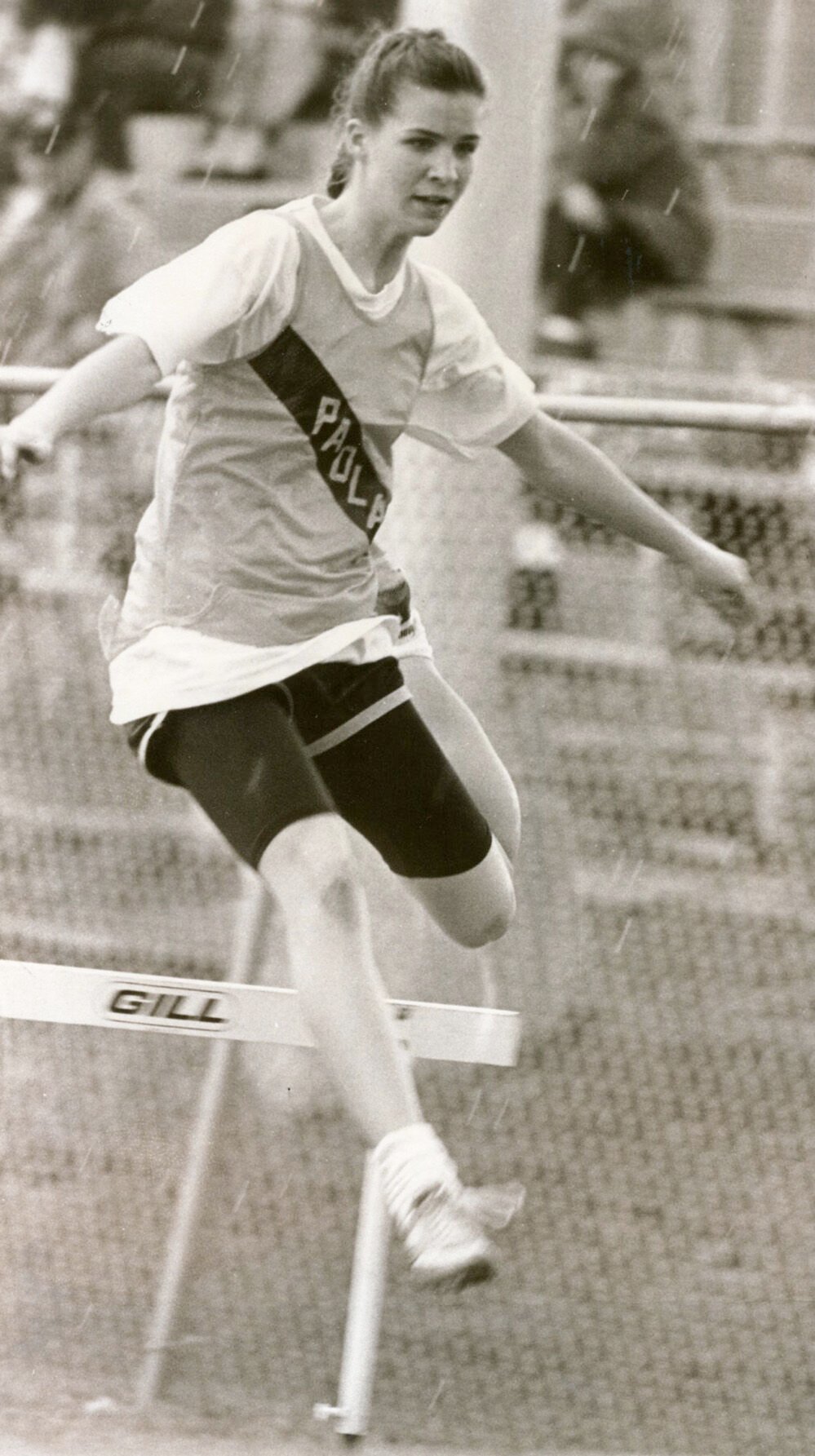 Robin Gostautas Branine soars over the hurdle for the Lady Panthers in 1993. As a sophomore she was sidelined for three weeks with a back injury, but made a triumphant return on her 16th birthday, going from the chiropractor’s office to regionals where she qualified for state in three events.

PAOLA — Robin Gostautas Branine, a sophomore in 1993, had one of the more incredible 16th birthdays ever recorded at Paola High School.

It was not the day she had expected.

Robin missed three weeks of the regular season with a back injury. She battled back to return for the Frontier League meet the previous week. It was short-lived as she reinjured her back during preliminaries of the high hurdles.

The Class 4A regional track and field meet was being held at Paola High School. Robin went to the chiropractor’s office that morning and celebrated her 16th birthday by qualifying for state in three events.

She placed first in the 100-meter high hurdles, second in the 300-meter hurdles and ran a leg on the 4x400-meter relay team that also qualified for state.

“It was a nice birthday present,” she said. “I thought I was going to run in the low hurdles, but coach (Earl) Ventura said I had the third fastest time in the high hurdles and would appreciate it if I would compete in the event, so I decided to give it a try.”

The Lady Panthers won the Frontier League title in 1993, capturing the crown for the third year in a row. Paola scored 144 points to hold off Anderson County by 27 points.

Robin was one of seven athletes to represent Paola at the state track and field meet in Wichita. She placed fourth in the 100-meter high hurdles.

The day of the regional meet Robin did not even know if she would be able to compete for the Lady Panthers. She went to the chiropractor’s office for treatment and straight to the track.

Robin had told her parent’s not to arrive to the track until 6:30 p.m., when the finals of the 300-meter hurdles was scheduled to begin.

Robin lives in Louisburg with her husband Geoff. The couple celebrated their 20th wedding anniversary on Wednesday, July 22.

Her run to state in three events on her 16th birthday May 21, titled “Birthday run captures regional track medal,” was voted the Miami County Republic’s top sports story of the year in 1993, 27 years ago.

She was inducted into the Paola High School Athletic Hall of Fame in 2001. In addition to competing on the track and field program, Robin played volleyball and basketball for the Lady Panthers.

Robin worked with the Paola Lady Panther volleyball program for many years as an assistant coach. She was recognized by players and parents in 2012, notching the 100th victory of her career as coach of the freshman team. She led the freshman girls to first place in the Gardner-Edgerton Invitational that season. The Lady Panthers also won the Prairie View Invitational and Iola Invitational. Paola went on to win the league title, going 5-1 in league play.