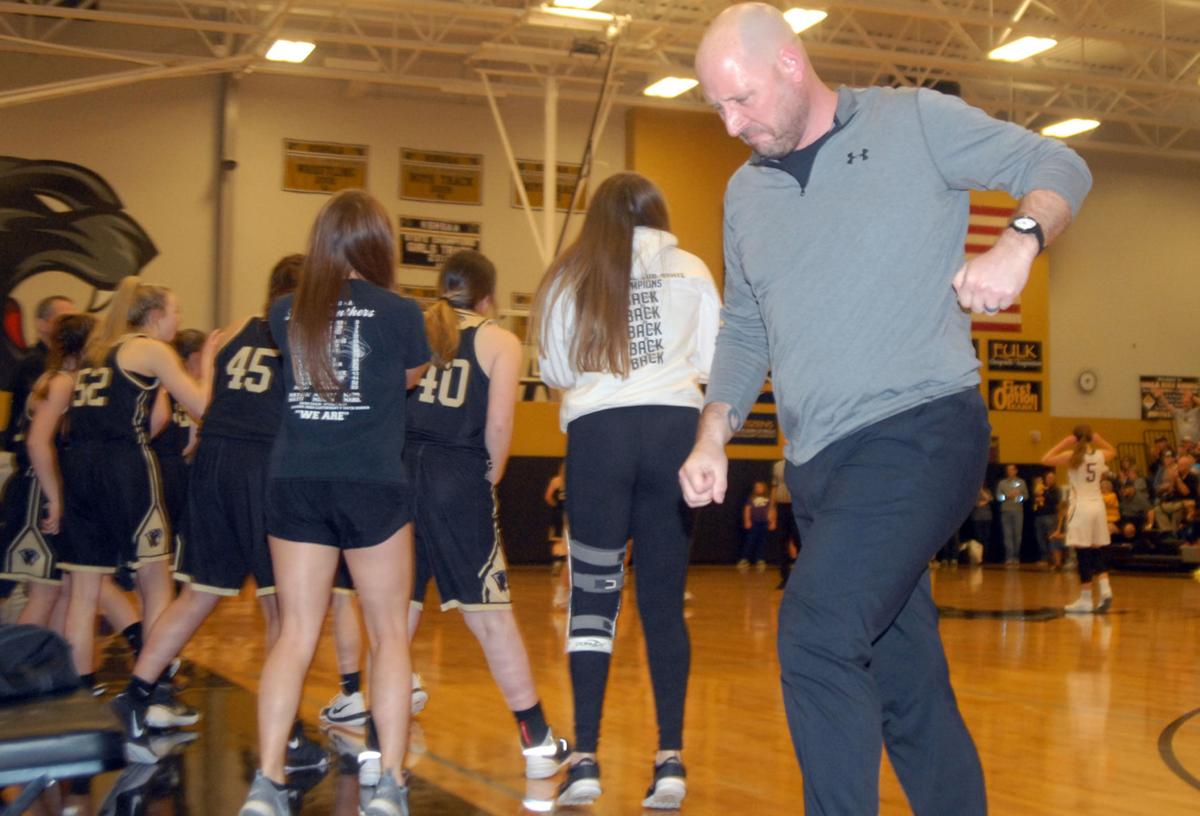 Paola girls basketball coach Stuart Ross celebrates after a victory for the Lady Panthers. After 20 years in coaching, 13 as head coach, Ross announced he was retiring from coaching at the end of the season to spend more time with his family. 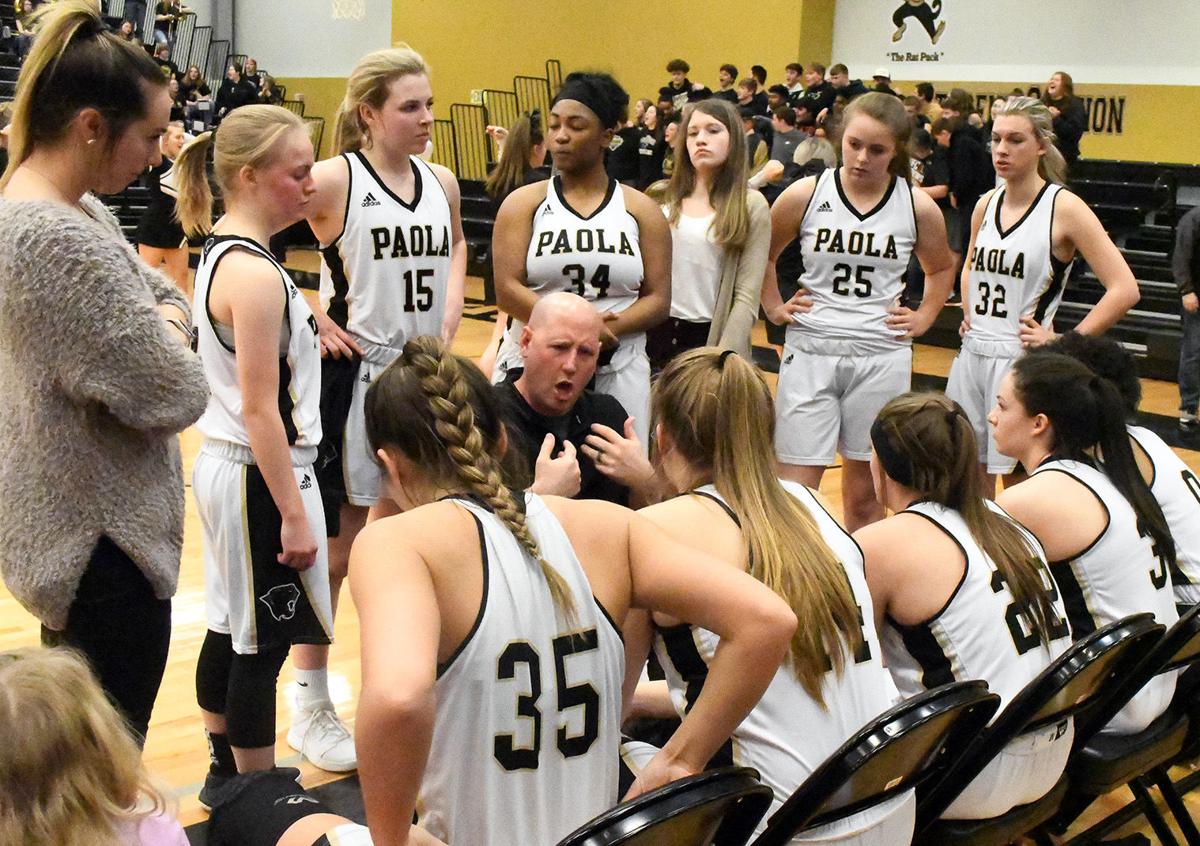 Stuart Ross, Paola girls basketball coach, uses a timeout to set up a play for the Lady Panthers. After more than two decades with the program, coach Ross resigned his position. 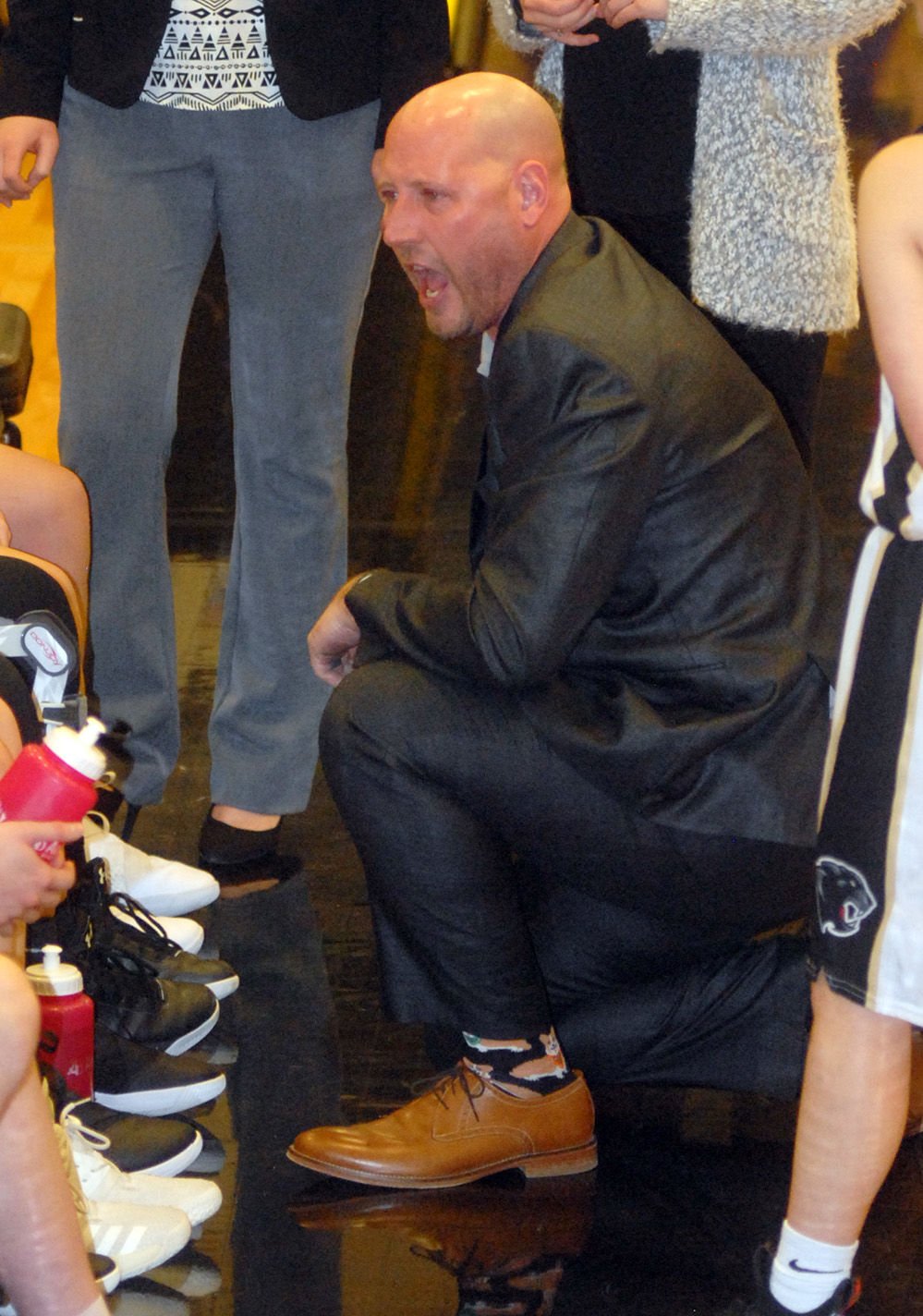 Paola girls basketball coach Stuart Ross celebrates after a victory for the Lady Panthers. After 20 years in coaching, 13 as head coach, Ross announced he was retiring from coaching at the end of the season to spend more time with his family.

Stuart Ross, Paola girls basketball coach, uses a timeout to set up a play for the Lady Panthers. After more than two decades with the program, coach Ross resigned his position.

PAOLA — After 13 years as head coach and 20 years with the program, Paola Lady Panther basketball coach Stuart Ross is calling it a career.

Ross announced his plans to resign from his head coaching position after the Lady Panthers’ final game of the season, in the Class 4A substate championship game.

It was the Lady Panthers eighth straight trip to the substate title game.

“It is just time for new blood,” Ross said. “I wanted to make the announcement now while we have new positions available for good people to come in.”

Ross said he wanted to spend more time with his family.

Ross said he knew during the season that this one was going to be his last.

That is just a part of the Stuart Ross era as head coach of the Paola Lady Panther basketball team.

It is a tradition that has been founded on great work ethic and great people, Ross said.

“It is awesome seeing that,” Ross said. “It is the kids who do that. They did the work. I have been able to coach some great kids from great families.”

The Paola Lady Panther basketball team made it back to the Class 4A substate championship game.

Paola was looking for another Cinderella storybook ending, chasing a trip to the state tournament, but those dreams ended in a heartbreaking 33-28 loss against the Lady Cardinals in Eudora in March.

McDow scored 15 points in her final game on the hardwood floor at Paola High School, leading the Lady Panthers to a 48-36 victory against Independence High School to advance to the substate championship game.

Paola ran into Bishop Miege in the substate finals to end the 2018-19 season.

McDow and Madison Bryant combined for 30 points to lead the Paola Lady Panthers to a 50-37 victory on the road against Independence in the opening round of the Class 4A substate tournament. The Lady Panthers ended the season in the substate championship game against Bishop Miege, falling to the Stags by a final of 91-27.

Seniors Ady Edwards and Skyler Williams led the Lady Panthers to a 38-29 victory against Spring Hill in the substate championship game in 2017-18 season.

Paola entered the substate tournament with a record of 9-11 and won it all for the program’s sixth consecutive trip to state.

“They are like having a kid,” coach Ross said of the six titles. “You know, you are proud of every one, but this one is special. We came into this tournament with a losing record. We were underdogs and still got the job done.”

Paola lost to Piper in the first round at state. Piper (21-0) was the top seed. Piper placed third in the state.

The Lady Panthers were 18-5 in the 2016-17 season, winning their fifth consecutive substate tournament for a fifth straight trip to state.

The Lady Panthers made history during the 2015-16 season, becoming the first team in the history of the program to win four league titles, four substate championships and made four straight appearances in the state tournament.

“To win four league titles and four substate titles in a row, no one understands how hard it is to do that,” Ross said.

Paola fell to Bishop Miege in the state championship game by 11 points, 67-56.

“They played with so much great pride of our town,” Ross said. “I keep thinking this is the best. What a group.”

Fourteen players in recent years have gone on to represent Paola on the hardwood floor in college.

Pictures of each of these players in action are on the wall in the hallway leading to the locker rooms and coaching offices.

Kaylee Farmer was on the women’s basketball team at Washburn University.

Taelor Karr was a guard, playing for Kansas State University and Gonzaga University.

Morgan Laudan played four seasons with Emporia State. She was a forward.

Tiana Moala was a four-year standout at Emporia State University. She played post.

Matti Morgan is a guard on the Avila University women’s basketball team. She scored the 1,000th point of her career this season.

Taryn Morris was a guard for Ottawa University. She is an assistant coach for the Lady Panthers.