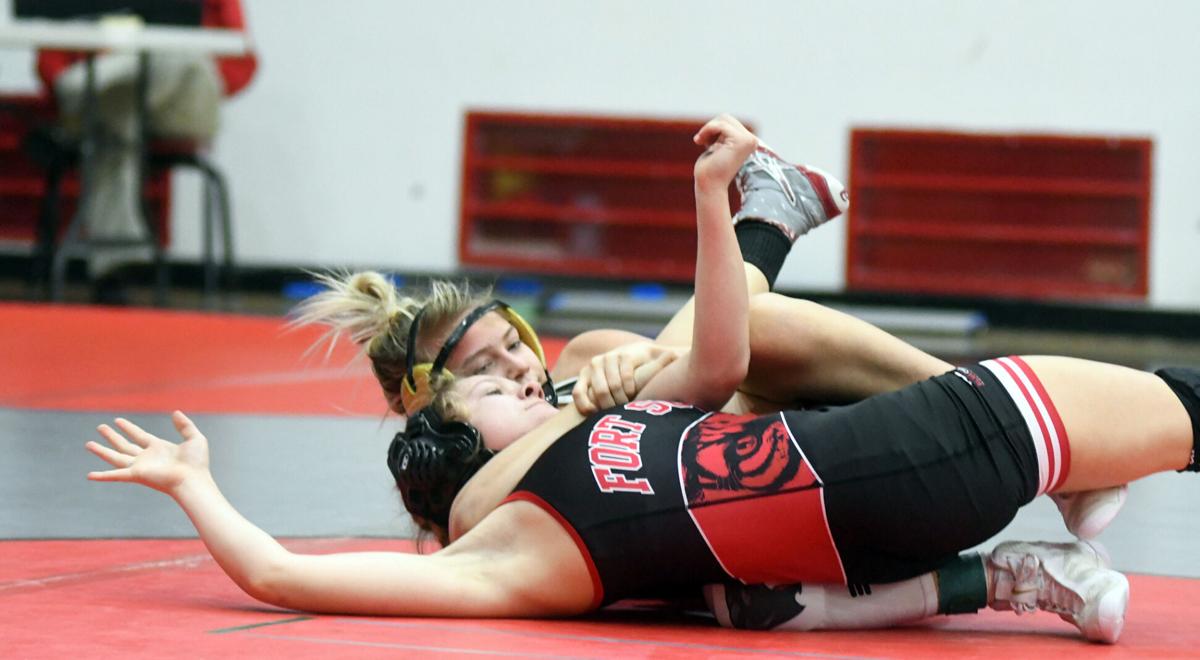 Paola senior Jordyn Knecht sets up a pin move during one of her 36 wins this season. Knecht, the Spotlight girls wrestler of the year, was 66-0 the last two seasons with 62 pins. 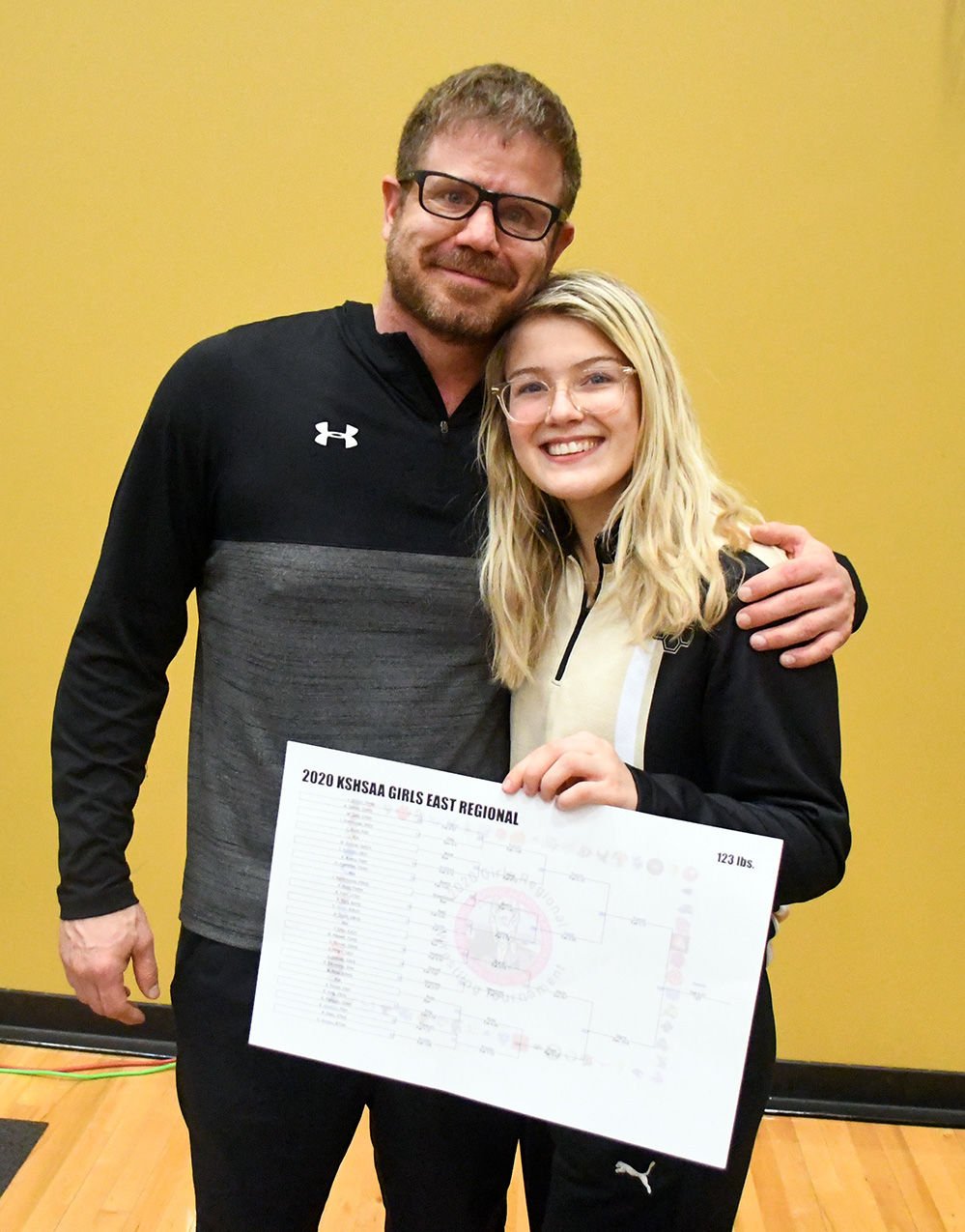 Jordyn Knecht of Paola poses for a picture with her father, Joe, after winning a regional title and being named the regional wrestler of the year.

Paola senior Jordyn Knecht sets up a pin move during one of her 36 wins this season. Knecht, the Spotlight girls wrestler of the year, was 66-0 the last two seasons with 62 pins.

Jordyn Knecht of Paola poses for a picture with her father, Joe, after winning a regional title and being named the regional wrestler of the year.

Knecht won the 126-pound state title with a perfect record of 36-0. She was 3-0 in the state tournament with three pins in less than one minute.

Competing in the girls high school wrestling the last two years, Knecht is a perfect 66-0.

Knecht is the Tri-County Spotlight Girls Wrestler of the Year.

Knecht and teammate Kailyn Younger led the Paola Lady Panther wrestling team to third place in the KSHSAA Girls Division II state tournament. It was the second straight year the Paola girls program placed third in the state. Younger, 23-2, was the state runner-up at 120 pounds.

“It was an amazing season,” Knecht said. “I definitely finished my high school career being proud. This season has definitely given me a boost of confidence on how I compete against the girls in Kansas.

“More importantly, I am proud of our team,” she said. “For the second year in a row, we got third place in the state. All of the girls have put in so much work to get where we are.”

She wrestled co-ed with the boys as a freshman and sophomore. She was a two-time state champion and a Frontier League placer.

Knecht placed fourth in the Frontier League tournament her freshman season, competing in the boys tournament.

She was sick her sophomore season and missed regionals, or many believe she would have not only qualified for state, but been a state placer.

“Jordyn’s season was incredible,” Paola coach Darvin Willard said. “She got to wrestle 36 matches in a pandemic year. Almost everybody had to wrestle duals. A few schools told her not to come because they didn’t have anybody for her to wrestle. Then our coaching staff decided to shut her down two weeks before post season started.”

Knecht could have had 40 matches or more.

But, she never complained. Knecht just went about her regular training schedule and got in the wrestling room to make sure she was prepared.

Not only was she 66-0 the last two years, 62 of those victories came by way of pins.

Knecht is a competitor on the mat, Willard said. She never settles, but is always developing new ways of attacking.

“Jordyn is a versatile wrestler,” Willard said. “She developed a few different takedowns and a few different moves besides her cradle this year. You just couldn’t game plan for a slide by to a cradle anymore.

“Jordyn helped the Lady Panthers to two third place trophies,” he said. “The three pins in 59 seconds at state was incredible. I think most people wanted to watch more of her, but the game plan was go out and finish the match and solidify that she is best girl in the state of Kansas.”

Paola has had a long line of girls step to the forefront as pioneers in wrestling, going back to Brittney (Miller) Pitts who wrestled in kids club and Brenna Douglas who wrestled since she was 5 and competed for the Paola Panther varsity team in high school.

Knecht took the torch from Miller and Douglas and put Lady Panther wrestling on the map, Willard said.

“Jordyn is the face of the girls wrestling in my opinion,” Willard said. “She was known for wrestling boys until girls became official.”

Knecht was 26-9 in two seasons of co-ed wrestling, competing against the boys. Her career high school record was 92-9.

“When people talk about Paola wrestling in general her name always gets brought up,” Willard said. “Jordyn was a different kind of leader she was not your vocal leader, but was able to lead and teach every girl we have in our program.

“She did daily drills with Kailyn Younger all year last year teaching all the basics, and Marina Johnson this year,” he said. “Later in the year this year I had her go with Bailey Donahue who was our only freshman girl. Jordyn will definitely be missed. Like we tell all of our wrestlers she knows where home will always be.”

This is my best fighter and I like this player fight. But Now I am busy, So I am not time spending on this. Gustavo Woltmann

This is my best fighter and I like this player fight. But Now I am busy, So I am not time spending on this. Gustavo Woltmann