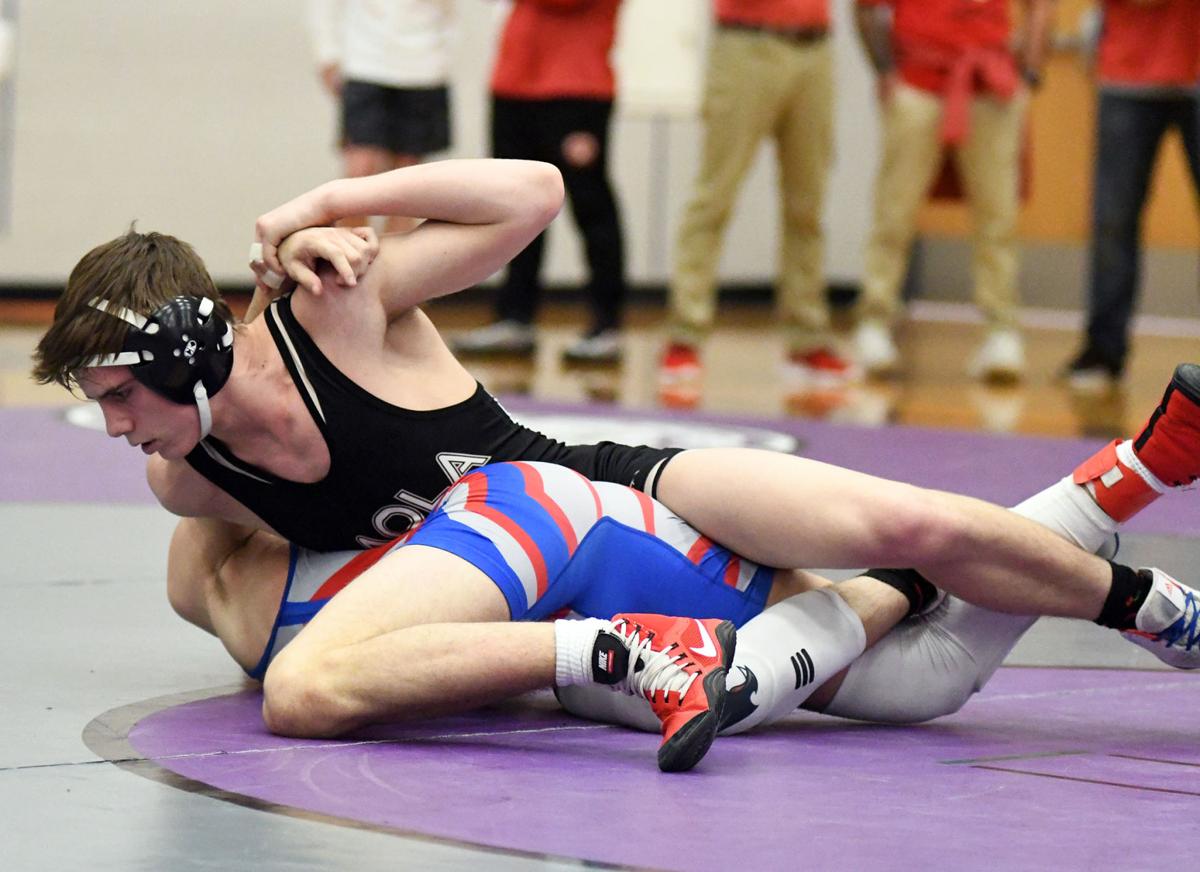 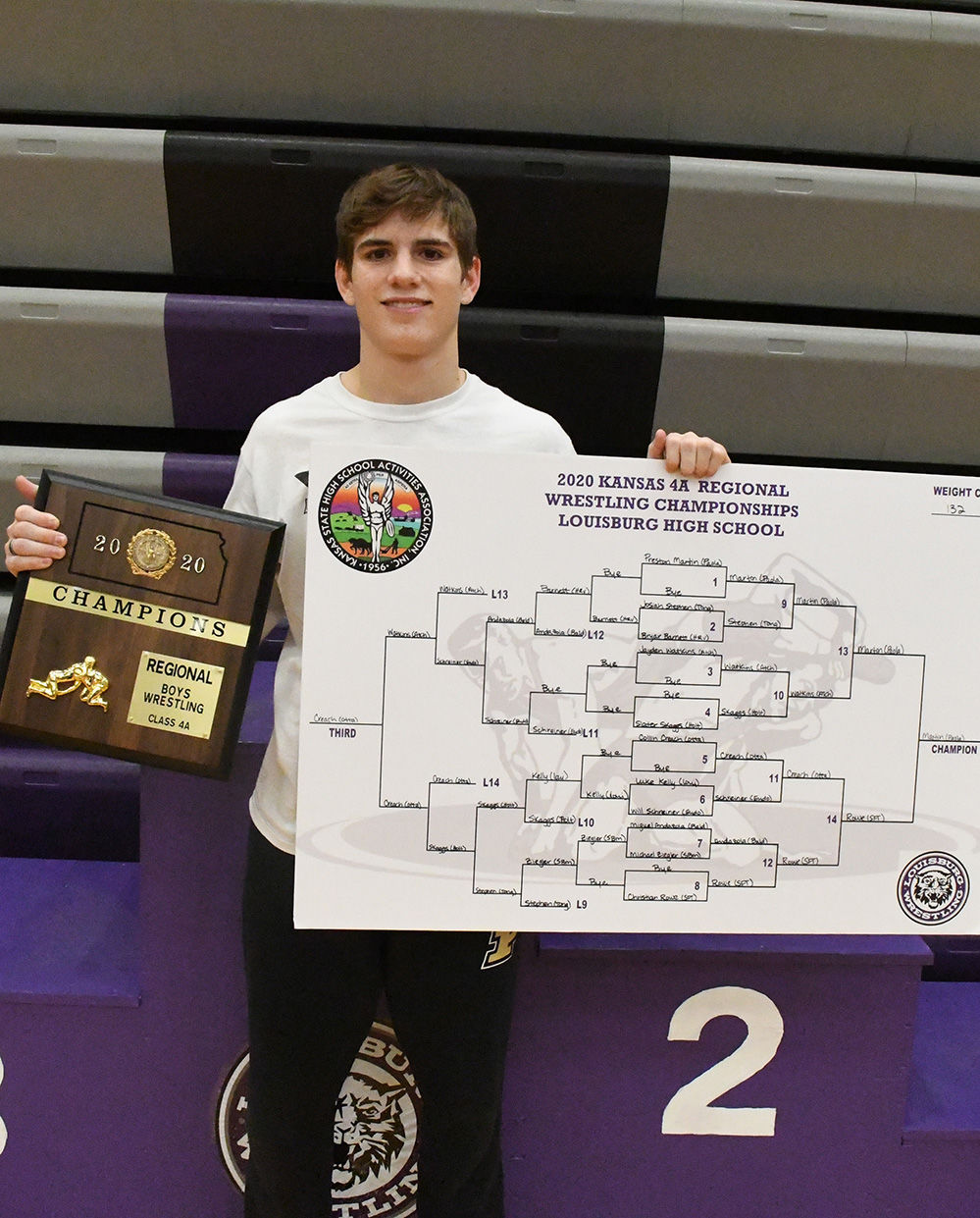 Preston Martin, a Paola senior, holds the 132-pound regional bracket he won and the regional trophy he helped the Panthers win at the Class 4A regional in Lousiburg. 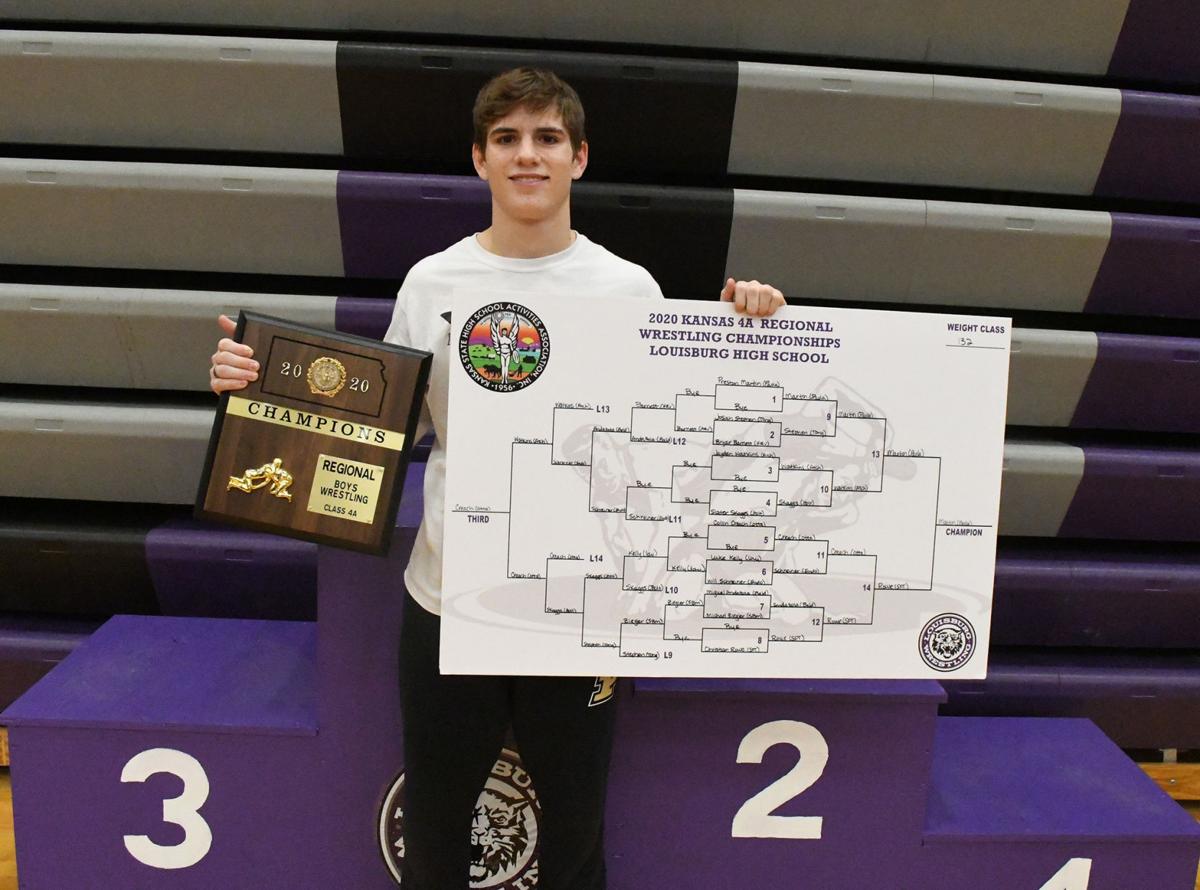 Preston Martin, a Paola senior, holds the 132-pound regional bracket he won and the regional trophy he helped the Panthers win at the Class 4A regional in Louisburg.

Preston Martin, a Paola senior, holds the 132-pound regional bracket he won and the regional trophy he helped the Panthers win at the Class 4A regional in Lousiburg.

Preston Martin, a Paola senior, holds the 132-pound regional bracket he won and the regional trophy he helped the Panthers win at the Class 4A regional in Louisburg.

PAOLA — Preston Martin was not just a great wrestler during his four years with the Paola Panther program, but one of the team leaders on and off the mat.

After winning the state title his freshman year, Martin set a goal to be the first Panther to win all four years of his high school career.

He didn’t just set that goal, but put in the time to make it happen, Paola coach Darvin Willard said. Martin didn’t make it all about his goals either, setting an example for younger wrestlers on the team to make everyone better.

Martin went 48-4 this season, winning the Class 4A state title at 132 pounds. He is the Tri-County Spotlight Boys Wrestler of the Year.

“Preston really embraced the team aspect this year and still kept his mind set on winning his fourth state title,” Willard said. “He couldn’t have done it without his teammates, and he would be the first person to tell you that.”

“Preston had a great year on the mat,” Willard said. “Paola has a bunch of great wrestlers and now he put himself at the top with the rest of them.”

Martin pinned his opponent for 43 of his 48 wins. He went 4-0 in the state tournament at Tony’s Pizza Event Center in Salina, scoring a 5-0 decision against Collin Creach of Ottawa in the 132-pound championship match.

He walked off the mat, raising four fingers for four state championships.

“It is an absolute rush to become the first four-time state champion for Paola,” Martin said. “The time and work that me, my family, my teammates and my coaches have put in has all led to this.

“I am honored to win the award. Paola is slowly getting back up,” he said.

Martin was one of the wrestlers who helped rebuild the program. The Paola Panthers went from three state qualifiers to nine.

“I am happy to be part of this team at its lows, when Jake Miller, Noah Bowden and I were the only state qualifiers, to now taking nine to state, the most we have qualified for state in the last decade,” he said. “I can’t wait to see where the program is in the next four years. We could become a powerhouse in Class 4A.”

Martin is the 33rd wrestler in the history of the state to win four titles. He did it at four different weight classes. Martin went 35-3 on his way to the 106-pound title as a freshman. He was 44-2 his sophomore season, placing first in the state at 113 pounds. Martin won the 126-pound title as a junior, posting a record of 42-3.

During his career with the Paola Panthers, Martin had a record of 167-12 with four state titles. He is ranked No. 4 all time in Class 4A in wins and No. 3 in career pins. Martin is No. 15 all time in wins for all classifications.

“Even being part of that list for career wins is crazy to think about, let alone being in the top five,” Martin said. “And top three in pins, I cannot believe that with how competitive this sport is now.

“Coming in my freshman year, I would have never imagined even coming close to these lists,” he said. “Going into the finals, I was super nervous about it. There was so much weight, and I knew I had to win it.”

Martin was one of nine Paola Panthers to qualify for the state tournament. It was just how he planned the ending to be — one to share with his wrestling family.

“Coming into my senior year this year, I was super close to my team,” Martin said. “I couldn’t have asked for a better senior year with them. Taking most of them to state with me on my last go was one of the greatest experiences of my career.”

His name will be on the records, but the four state titles were wins for the team and program, Martin said.

“I want to say thank you to my family, my teammates, Steven Yeager and Zack Donahue for being my practice partners this year, my coaches and all those who helped me along the way. They are the reason I am who I am and how I got to where I am,” he said.

Martin may never know the impact he has had on the sport, especially in Paola, Willard said.

“Like any other sport, when you become a champion, people look up to you.” Willard said. “There were little kids running up to him after he won his fourth title, asking for autographs. Hopefully, those little kids set goals now and try to achieve the impossible — four state titles.

“Preston is a guy that people love to watch wrestle,” Willard said.