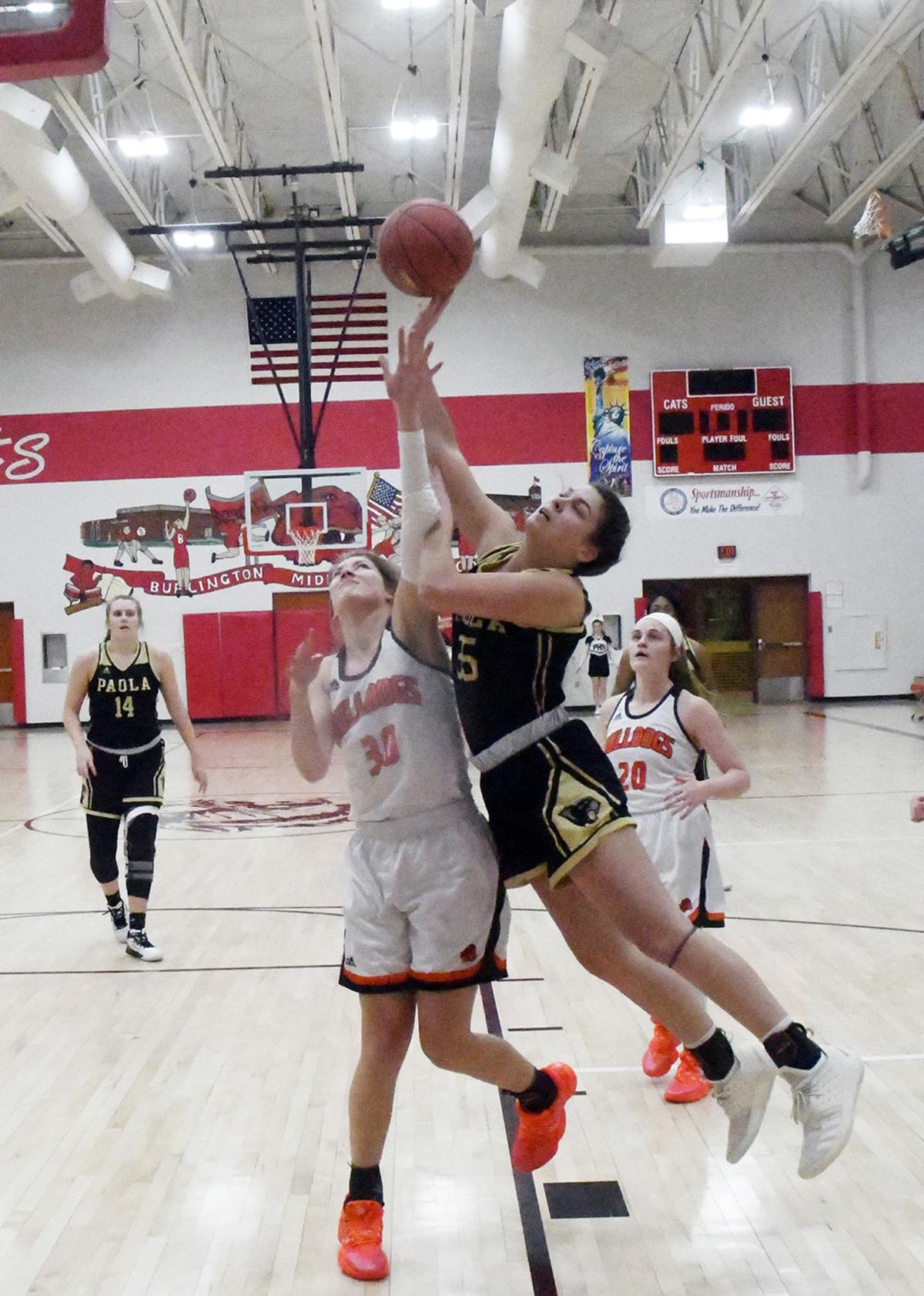 Paola senior Trinity McDow drives the baseline during the Burlington Invitational. McDow had the lowest turnover percentage on the team and also led Paola in charges taken. 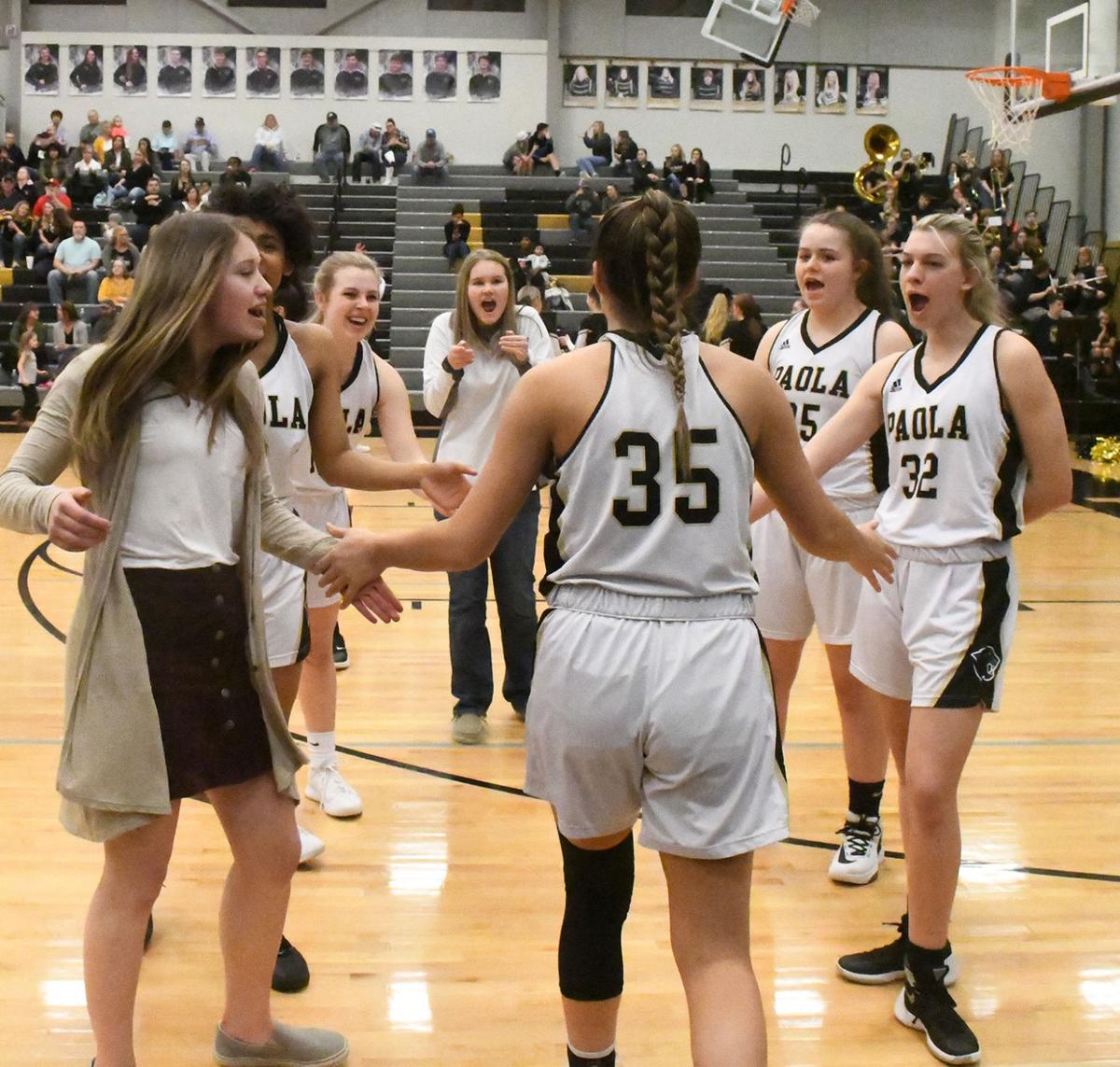 Trinity McDow walks onto the hardwood floor for the last time at Paola High School during introductions prior to the Lady Panthers’ home playoff game against Independence.

Paola senior Trinity McDow drives the baseline during the Burlington Invitational. McDow had the lowest turnover percentage on the team and also led Paola in charges taken.

Trinity McDow walks onto the hardwood floor for the last time at Paola High School during introductions prior to the Lady Panthers’ home playoff game against Independence.

PAOLA — Trinity McDow brought her tool box with her every time she stepped onto the court for the Paola Lady Panthers.

She did a little bit of everything for Paola.

Not all of it showed up in the scorebook.

McDow, a post player, handled the basketball almost like a third guard on the floor for Paola. She not only took on the role but excelled at it. McDow had the lowest turnover percentage on the team.

Defensively, she also did the little things to make the team better. McDow led the team in charges taken.

She also put her stamp on the game, averaging 12 points, six rebounds and 1.4 steals per game.

McDow was named the Tri-County Spotlight Girls Basketball Player of the Year.

“Winning this award means so much to me because I have worked hard just to improve myself as a basketball player this year,” McDow said. “Winning this as a senior is an honor to show that my hard work over the past four years has paid off.”

McDow said while the honor recognizes her, it is an award she shares with her teammates.

“I think senior year was by far the best season I have had,” McDow said. “But it wouldn’t have been that way without a little pushing from coach Stuart Ross and my teammates.”

The Paola Lady Panthers faced some adversity, and were better for it at the end of the season, McDow said.

“Our season as a team started off a little rocky, but we all started to realize we are so much better than the outcomes of our games,” she said. “So we pushed each other harder and started to play more as a team.

“That mentality got us to the substate championship game, coming down to one shot to tie the game against Eudora, the No. 1 seed,” McDow said. “I think that was pretty awesome, but wish it would have ended a different way.”

In her final game for the Paola Lady Panthers, McDow spent the final seconds on the bench.

“Fouling out of that game crushed me, knowing I would not be able to help my team win that game,” she said. “I have put so much hard work and dedication into this season, knowing I can be a good player if I did.

“My teammates and I put a lot of work in during the off-season and it has really shown,” McDow said. “It was nice seeing how far we came during the season when no one expected us to.”

McDow came into the program with great expectations and lived up to them with a lot of hard work and determination, coach Ross said.

“Trinity showed great potential early in her career,” he said. “She just wasn’t ready to be the kind of player our program expected her to be. She is like many players that we have had in the past. Some make the sacrifices, develop the traits, hone their skills and learn to become a great teammate. Some don’t.

“Trinity’s greatest attribute is how far she has come in four years,” Ross said. “She did all the little things it takes to reach that potential we saw when she was younger. I couldn’t be prouder of her development, and it speaks well for her future.”

McDow scored 15 points in her final game for the Lady Panthers on the hardwood floor at Paola High School in a 48-36 victory against Independence on March 3.

She scored a game-high 19 points on senior night, leading Paola to a 46-35 win against rival Louisburg on Feb. 28. McDow kept the Lady Panthers in the game in the second quarter, sinking three baskets with two 3-pointers.

McDow led all scorers, posting 23 points in a 51-39 victory against Spring Hill on the road Feb. 11.

McDow scored all 10 of Paola’s points in the fourth quarter.

She had a game-high 19 points in a 55-25 victory against Independence in the opening round of the Burlington Invitational on Jan. 21.

McDow had 14 points in the tournament’s final game against Rock Creek on Jan. 25.

She made four field goals and one free throw in the fourth quarter, scoring nine of Paola’s 13 points.