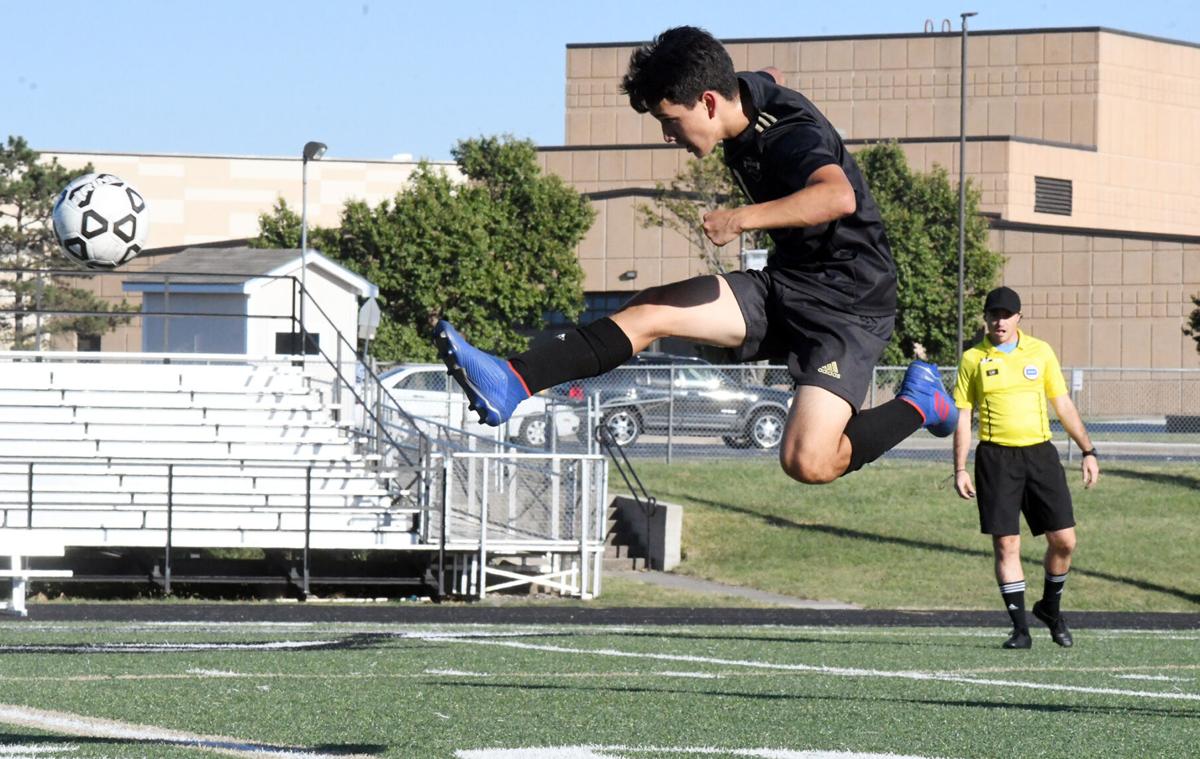 Paola soccer player Carden Escobar soars through the air to play the ball on an offensive attack against Baldwin on Monday, Sept. 27. Escobar had an assist in a 2-1 victory against Highland Park on Tuesday, Sept. 28, for Paola’s first win since October of 2019. 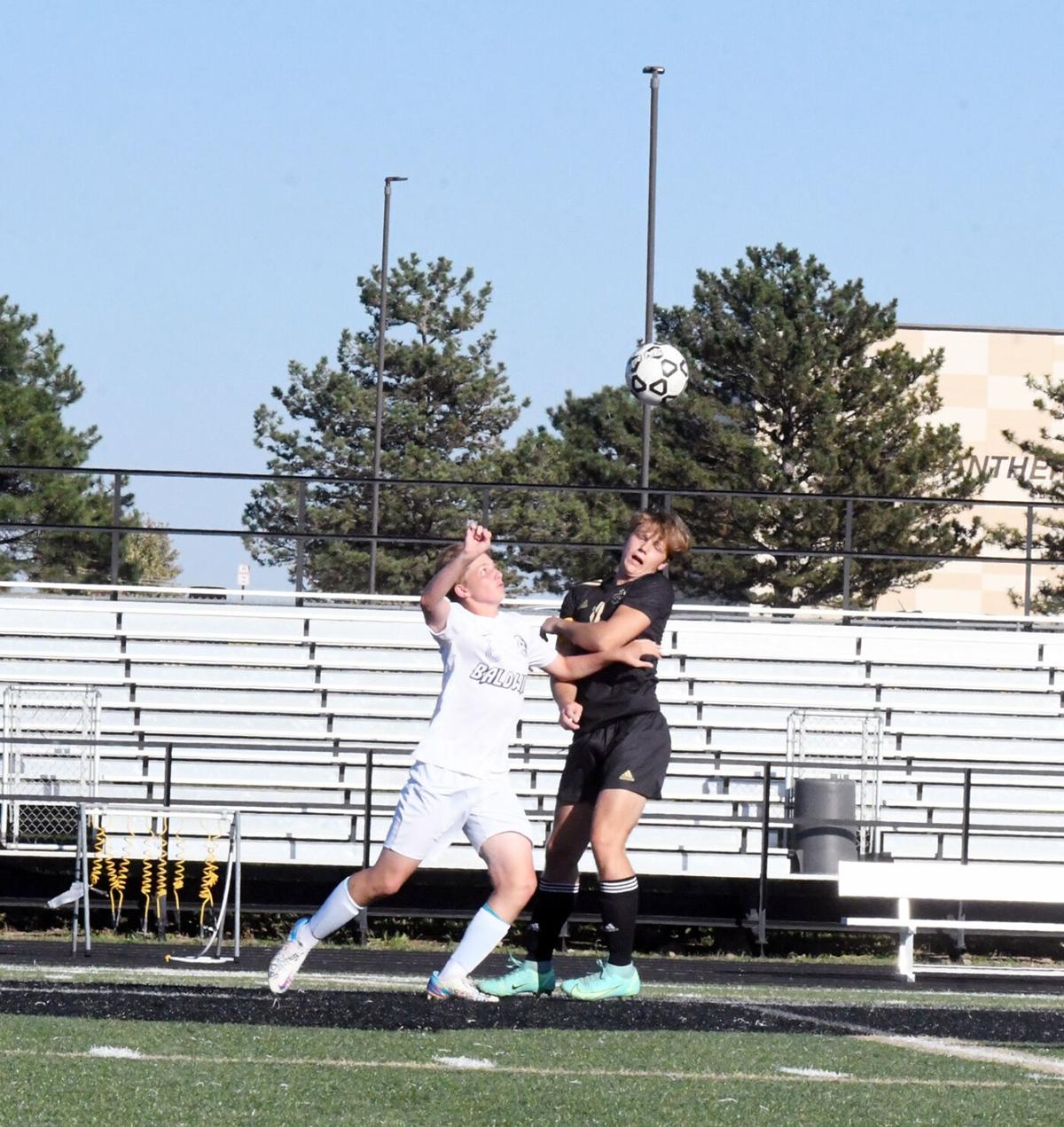 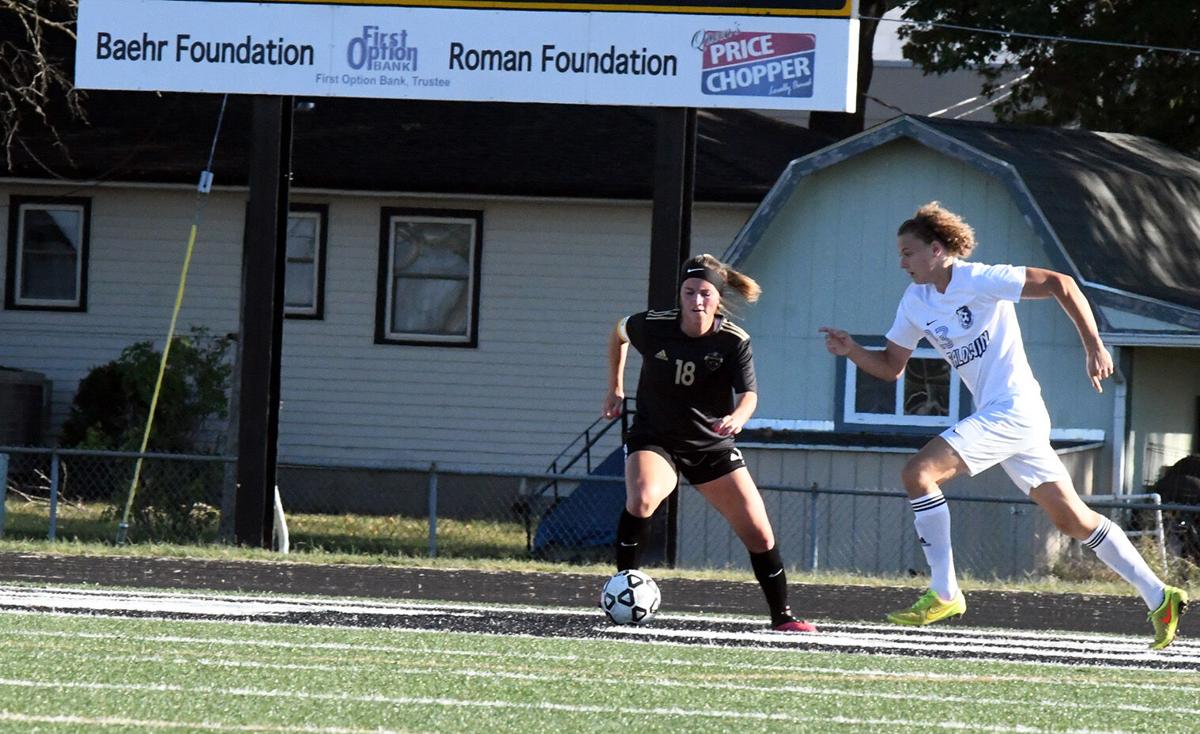 Defender Shaelyn McLean takes the ball away from a Baldwin forward before clearing it for Paola on Monday, Sept. 27. 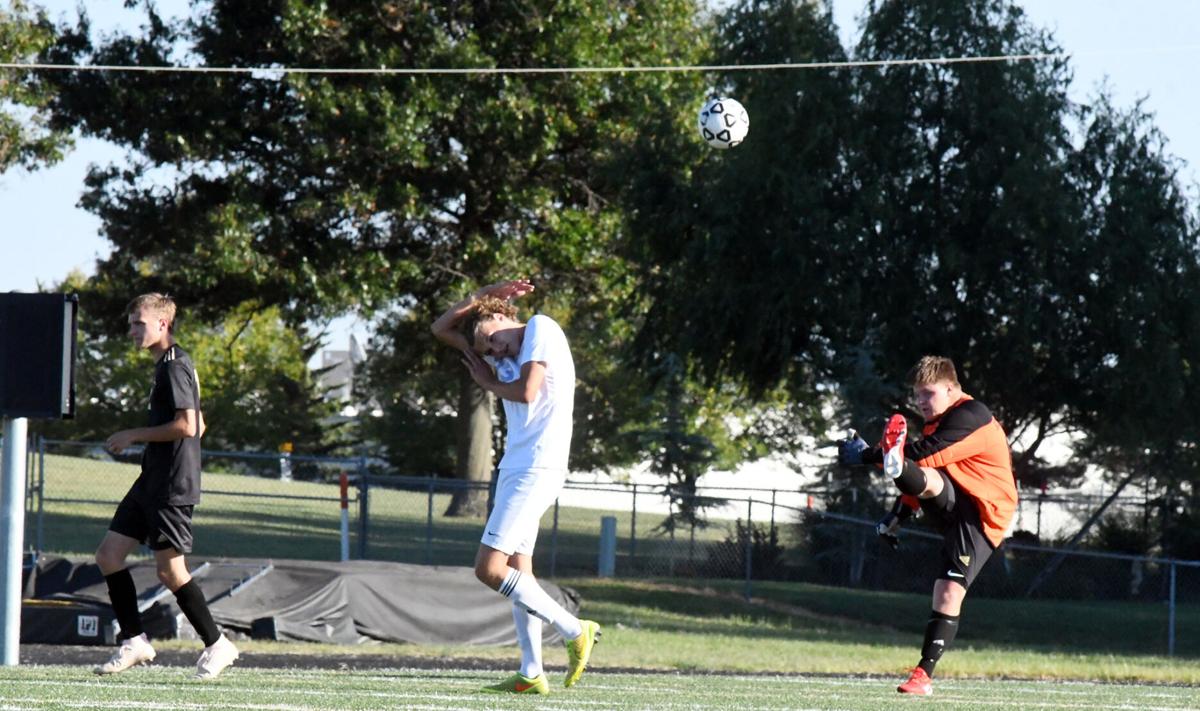 Paola keeper Aaron Koechner kicks the ball after making a save against Baldwin on Monday, Sept. 27.

Paola soccer player Carden Escobar soars through the air to play the ball on an offensive attack against Baldwin on Monday, Sept. 27. Escobar had an assist in a 2-1 victory against Highland Park on Tuesday, Sept. 28, for Paola’s first win since October of 2019.

Defender Shaelyn McLean takes the ball away from a Baldwin forward before clearing it for Paola on Monday, Sept. 27.

Paola keeper Aaron Koechner kicks the ball after making a save against Baldwin on Monday, Sept. 27.

PAOLA — The Panther soccer team left the field with a 2-1 victory against Highland Park on Tuesday, Sept. 28, winning its first game since October of 2019.

Hayden Worden and Patrick Reeder scored to post the first win of the season for the Paola Panthers.

“It was a great feeling,” Paola coach Trevor Gallagher said. “This team has worked very hard and has had tough games this season. This win meant a lot to the whole team. Seeing that the hard work they have put in has resulted in a win has given a spark to the team.”

Worden scored with 35 minutes left with a shot from 30 yards out that hit the top right post and went in the back of the net. Carden Escobar had the assist.

Reeder’s goal came with 27 minutes on the clock on a 10-yard left footed volley. He stole the ball on a bad clear by Highland Park and capitalized for Paola with the goal.

Panther keeper Blake Ramsey made five saves in the win for Paola. He has 90 saves on the season.

Dominic McCoy and Shaelyn McLean made key stops on multiple occasions to prevent Highland Park’s offense from scoring. McCoy and McLean both played the entire game.

Aaron Koechner made a varsity start for the Paola soccer team at home against Baldwin on Monday, Sept. 27.

Ramsey suffered a hand injury and was not able to play.

Koechner stepped in against Baldwin, one of the winningest programs in the state this season, and kept Paola in the game at Panther Stadium.

Paola trailed 4-0 at the half and lost the Frontier League game 6-0.

Koechner made some incredible saves in the game for the Panthers.

McLean was a dominant defender for Paola, attacking the dribble, taking the ball away and clearing it. Truman White, Steffen Morschel, Ariana Gallagher and McCoy also made some great defensive plays to guard the Paola goal.

Koechner made a great diving save just 45 seconds into the game. Baldwin scored with 32 minutes on the clock for a 1-0 lead.

Koechner made another great save on a hard shot with 31:55 on the clock. He denied Baldwin again with a save at 24:29.

Braeden Whitehurst had a great chance down the wing before running out of room with defenders closing in.

Koechner was forced to come out and cut down the angel on an attack. The ball got past him, and Baldwin scored for a 3-0 advantage.

Ramsey, who got in the game on offense, made a great pass to Whitehurst who put the ball in the back of the net only to have it called back on an offsides.

Gallagher made a great defensive stop in front of the goal for the Panthers, taking a hard shot off her shoulder.

Midfielder Jace Reittinger drove the ball down the right wing on a strong possession before being taken down by the Baldwin defense.

Ryan Flynn made a great defensive stop but got called for a foul. He drew the call, despite making contact with the ball before hitting the opponent’s foot.

Baldwin scored nine minutes into the second half, increasing its lead to 5-0.

McLean made another great stop with 30 minutes left in regulation, driving a Baldwin attacker off the field. She made another tough play three minutes later and cleared the ball.

Baldwin had a direct kick with 26 minutes to go only to be denied on a save by Koechner.

Ramsey made a great cross to midfielder Carden Escobar on a great offensive attack, but Paola lost the possession.

Forward Hayden Worden drove the ball down the right wing on a deep possession, making a strong run at the Baldwin goal.

Captains for the Paola Panthers were Worden, McLean and Flynn.

Ayden McArthur showed off his fleet feet on the sidelines, volunteering his time to be ball boy for the Paola soccer team.

Paola played Chanute to double overtime in a 0-0 tie on the road Thursday, Sept. 23.

Worden, McCoy and Reitinger all had shots that hit the goal post. Whitehurst and Escobar had great shots that were saved by the Chanute keeper. Ramsey made 10 saves in the game.