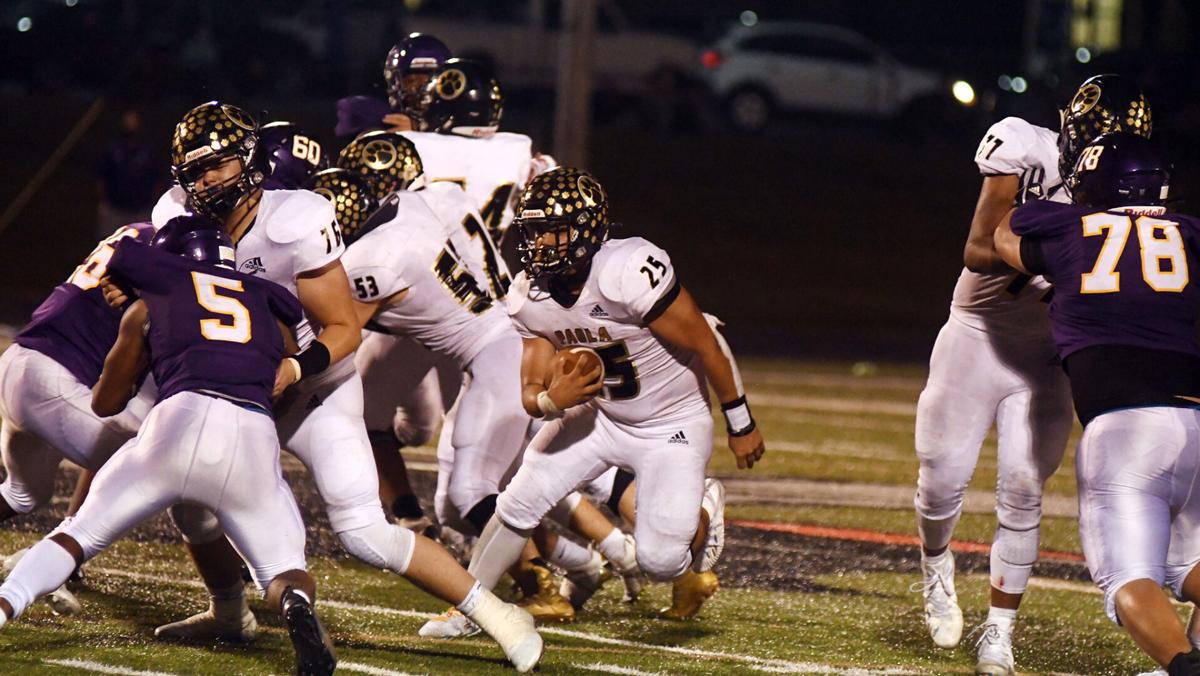 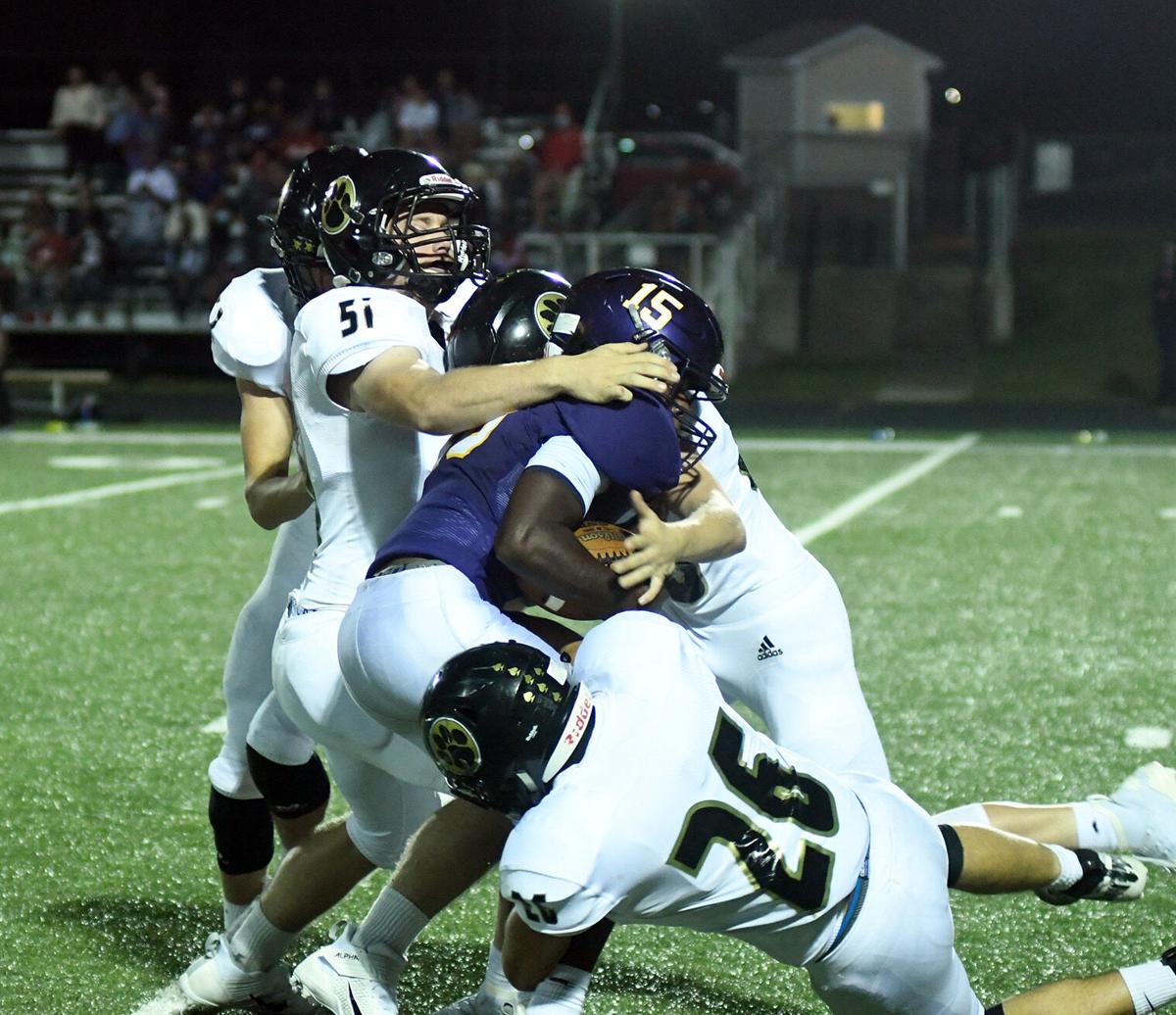 Panther defenders Dalton Picek (No. 51), Layton Moore (No. 26) and Jonathon Earlywine (No. 80) surround a Piper running back during a home game Friday, Oct. 9. 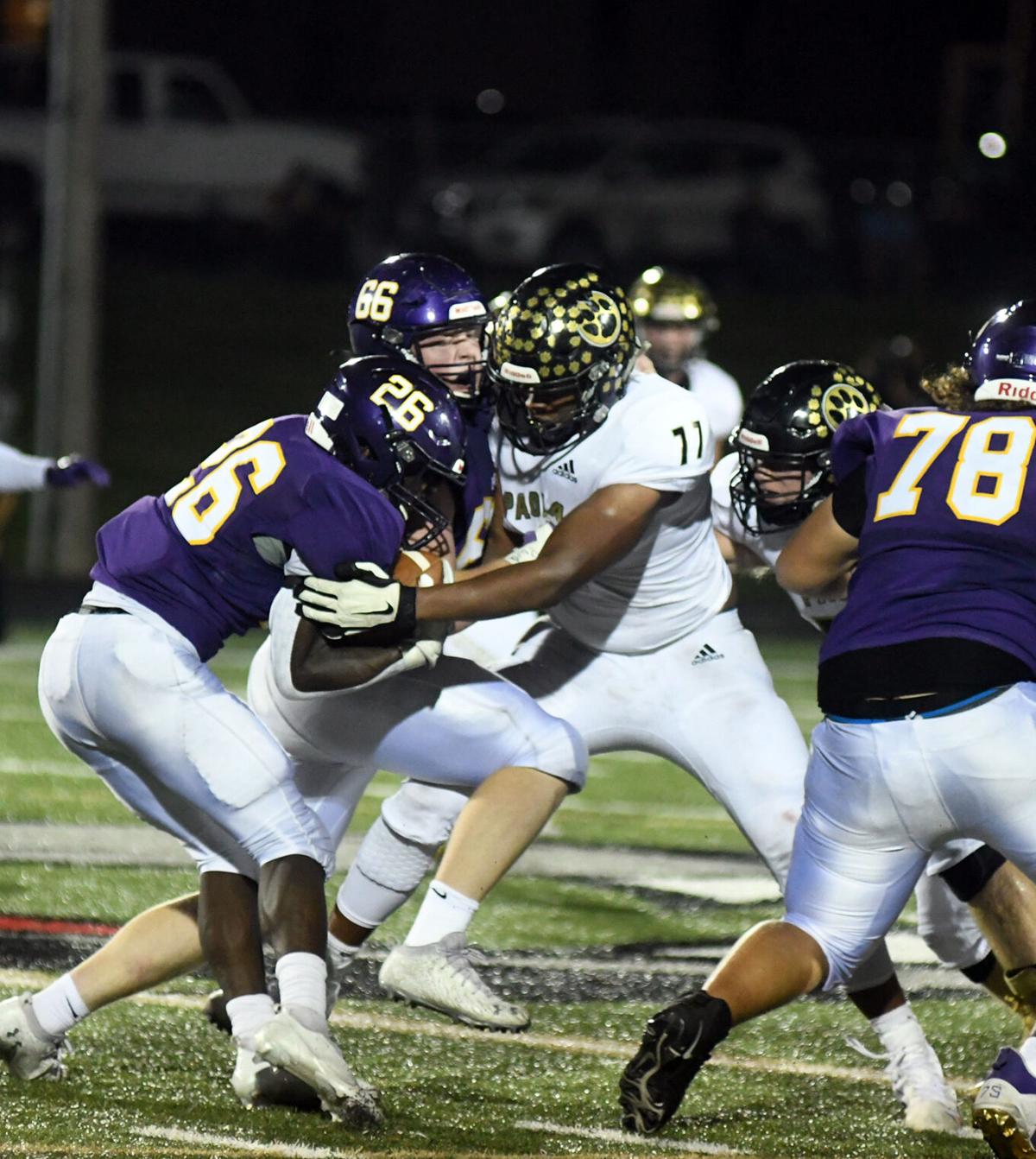 Paola lineman Damarius Bassett breaks through a block to get to a Piper running back. 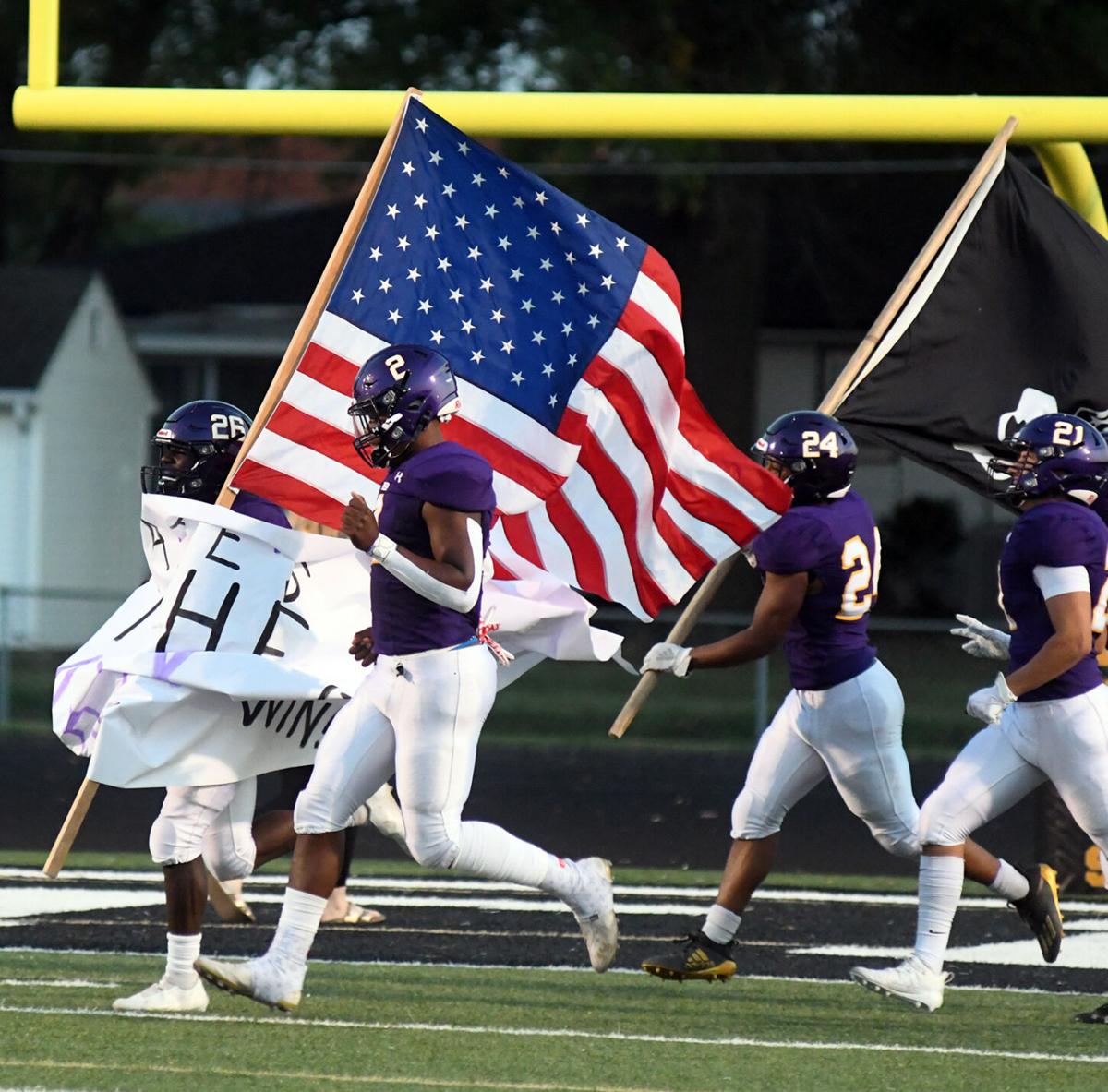 Piper, which is playing all of its games on the road this season due to COVID-19, runs on the Paola field carrying the American flag Friday, Oct. 9. Piper also celebrated its homecoming prior to kickoff.

Panther defenders Dalton Picek (No. 51), Layton Moore (No. 26) and Jonathon Earlywine (No. 80) surround a Piper running back during a home game Friday, Oct. 9.

Paola lineman Damarius Bassett breaks through a block to get to a Piper running back.

Piper, which is playing all of its games on the road this season due to COVID-19, runs on the Paola field carrying the American flag Friday, Oct. 9. Piper also celebrated its homecoming prior to kickoff.

PAOLA — The Paola Panthers took another step toward the Frontier League title with a victory against the Pirates from Piper.

Paola led 21-8 at the half, and opened the third quarter with a 50-yard touchdown pass from quarterback Garrett Williams to wide receiver Bo Robison in route to a 42-16 victory at Panther Stadium on Friday, Oct. 9. Paola improved to 6-0.

Paola posted more than 400 yards of total offense, rushing for 336 yards and passing for 102 yards.

Piper does not have a home this season. Piper is playing all of its games on the road due to COVID-19. The Piper Pirates ran onto the field with an American flag. Piper also celebrated its homecoming prior to kickoff.

The Panthers had four first downs on their first possession, scoring on an 11-yard run by Jovanni Blackie for a 7-0 lead with 7:04 left in the first quarter. Fletcher Aude moved the chains on third down and five. Blackie gained 5-yards on third and four for a new set of downs. Williams kept the ball on the quarterback keeper to take the ball to the Piper 34-yard line. Robison caught a 23-yard pass from Williams for a first down at the 11.

Jackson Earlywine made a big hit for a loss of yardage, bringing up third down and nine. Piper had an incomplete pass. Paola fumbled the punt, turning the ball over to Piper at the Panther 22-yard line.

The Panther defense rose to the occasion and forced the Pirates into a fourth down and long. Jake Karr had a quarterback sack, holding Piper on downs.

Paola was held on downs and punted to Piper.

The Panthers got the ball back and put a drive together. Aude broke through a hole and got a first down at the 42-yard line. Williams picked up 16 yards on the option. Williams capped off the drive with a 5-yard touchdown run, making it 13-0 with 8:36 left in the half.

Carter Stanchfield made two hard hits, stuffing the run for Piper. The Pirates were forced to punt. Paola had to kick the ball back to Piper after a drive stalled.

Karr had a sack for a loss of yardage, bringing up second down and long.

Piper ran for a first down. The Pirates then got on the scoreboard on 24-yard touchdown pass. Piper ran for the two-point conversion for a score of 13-8.

Williams had a 25-yard pass to Robison in the second quarter for a first down at the Piper 25-yard line. Williams capped the drive with a 2-yard touchdown run with 47.8 seconds left in the half. Williams threw a pass to Brock Pitzer for the two-point conversion, making it 21-8 at the intermission.

Paola struck to open the third quarter, scoring on a 50-yard touchdown pass from Williams to Robison, increasing the lead to 28-8.

Piper answered with a 2-yard touchdown run with 2:04 left in the third quarter. The Pirates faked the extra-point kick and passed for the two-point conversion.

Williams made a third-down conversion with a 12-yard run. Aude busted through a hole, got outside and ran for 25 yards. Paola stopped on a run at the whistle and Piper pounced on the football. Officials ruled it a fumble, saying no one blew a whistle on the play.

The Paola defense stepped up again. Karr and Stanchfield combine for a tackle and a loss of a yard. After a first down, Stanchfield had a tackle to stop the run. Isaac Brakner made a big stop against the run. Piper had an incomplete pass on third down and punted the ball.

Paola put one more drive together to seal the win. Blackie ran for a first down. He had a 23-yard gain for a first down and goal-to-go at the 9-yard line. Aude ended the march with a 1-yard touchdown run.

Piper fumbled the kickoff and the ball was recovered by Paola linebacker Kaden Rhamy. The Panthers picked up a first down and proceeded to run out the clock.

William had 14 attempts for 81 yards and three touchdowns. He completed five of nine passes for 102 yards and a touchdown.

Robison had three receptions for 98 yards and a touchdown. Karr and Pitzer had one catch each.

Karr and Brakner each had nine tackles to lead the Paola defense. Karr had two quarterback sacks. Brakner had one sack.

Stanchfield made eight tackles with one tackle for a loss of yardage. Damarius Bassett had five tackles. Williams and Earlywine each had four tackles.

Isaac Meyers, Nick Walker and Williams each broke up two passes. Pitzer had three tackles and broke up one pass. Layton Moore, Dylan Miller and Robison each made two tackles.

Williams had three punts, averaging 40 yards per punt. He had one punt that covered 48 yards.